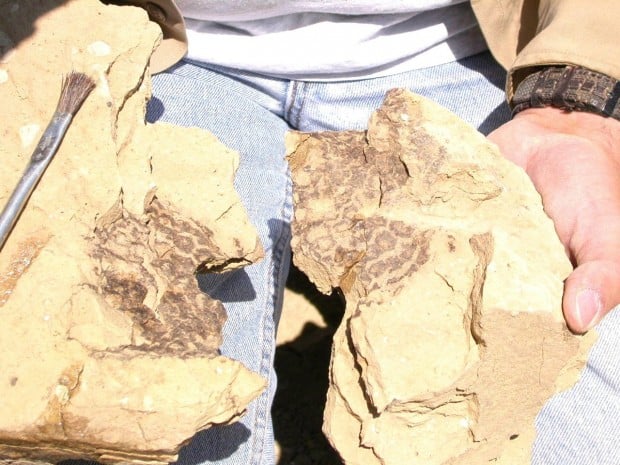 Petrified dinosaur skin is revealed in a fossil from the Mother's Day site in Carbon County. 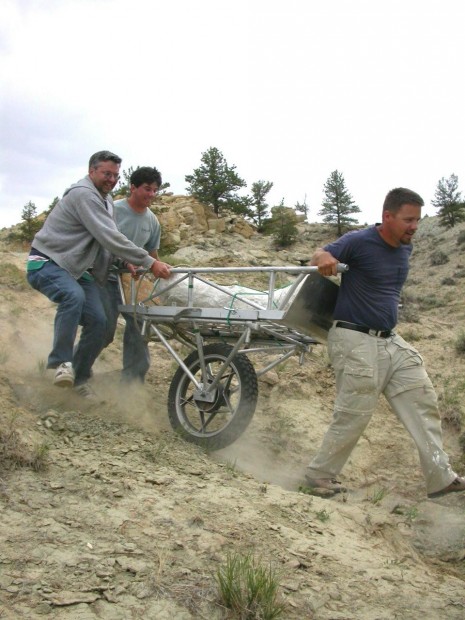 Glenn Storrs, left, helps haul a dinosaur fossil on a contraption made from two hospital gurneys and a motorcycle wheel, dubbed the dino wheel. 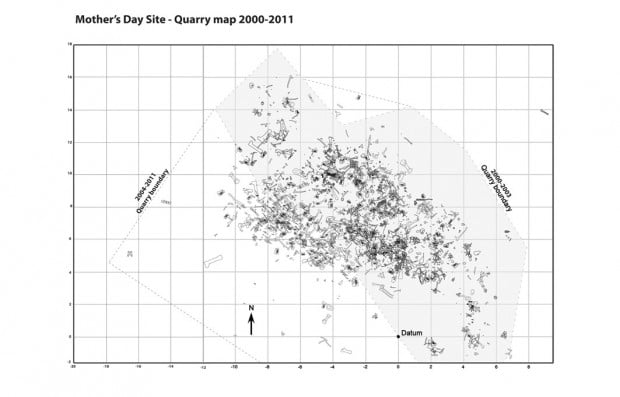 This map shows the distribution and orientation of bones at the Mother's Day site. The lines mark 1-meter squares. 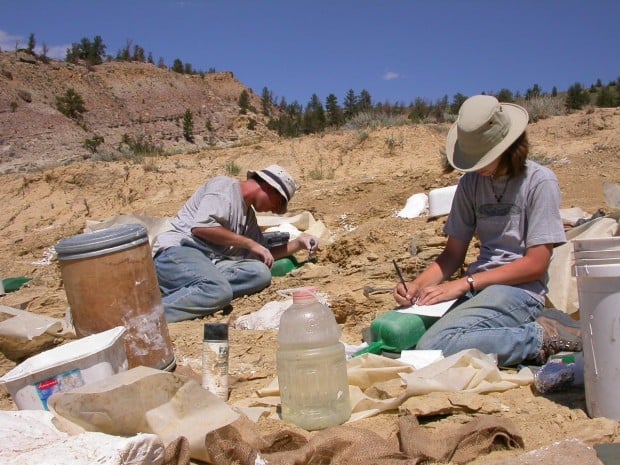 Cincinnati Museum Center field school volunteers helped remove, clean and catalog bones at the site over a period of 11 years. 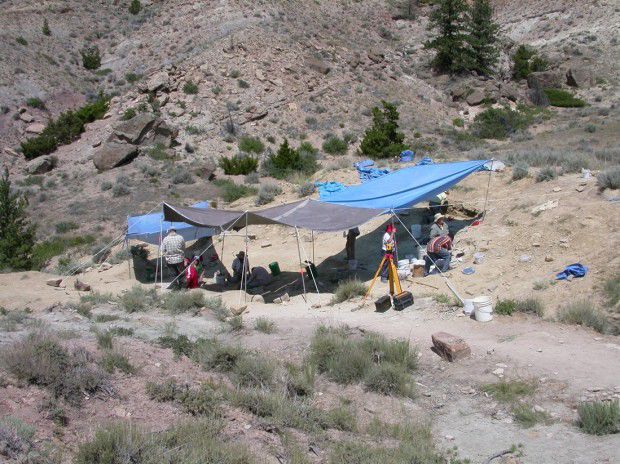 Tarps helped shade workers as they dug up the dinosaur fossils using everything from hammers to dental picks.

After 10 years of painstakingly unearthing scattered dinosaur fossils at a site along the base of the Pryor Mountains, Glenn Storrs believes he has figured out how the bones arrived at their final resting place 145 million to 150 million years ago.

“I think it’s a great story, and I’m sticking to it,” Storrs, curator of vertebrate paleontology at the Cincinnati Museum Center, told a gathering at Rocky Mountain College last week.

To understand Storrs’ theory, you have to imagine a landscape much different from the present one in south-central Montana, where the fossils were found southeast of Bridger. Storrs said the area was relatively flat 145 million to 150 million years ago, with no Beartooth Mountains rising to the west and no Pryor Mountains uplifting to the east.

The land would have been somewhat similar to the current Amazon Basin — a large river flowing from the southwest through an area densely forested with conifers and a palmlike tree called a cycad. Farther away from the water would have been large, open dry areas similar to Africa’s savannahs.

The climate would have been monsoonal, meaning extended periods of drought followed by torrential rains.

“Here’s an important point,” Storrs said. “These forests were a resource for large herbivorous dinosaurs. But these resource-rich areas were separated by resource-poor areas — these savannahs.”

It is the big sauropod dinosaurs — the ones with long necks, long tails and small heads like diplodocus — that are commonly found in the Morrison Formation. An adult diplodocus could grow to 90 to 100 feet long and weigh up to 118 tons. Juveniles were about 20 to 40 feet long.

The Morrison Formation is a layer of sedimentary rock rich with dinosaur fossils that stretches from Canada to New Mexico. Scientists used to believe that the Montana portion of the formation contained no fossils.

A Museum of the Rockies volunteer was exploring the area along the base of the Pryor Mountains in 1994 when he found what is now called the Mother’s Day Quarry because he discovered it on the greeting card holiday. The Museum of the Rockies worked the site for only two years before turning it over to the Cincinnati Museum in 1999, with the blessing of the Bureau of Land Management, which manages the land.

Over the next 12 years, the museum conducted annual field trips to the site, using the dig as an educational and outreach tool. During that time, more than 1,000 fossils mainly from what are believed to be juvenile diplodocus dinosaurs have been excavated for study.

Many of the fossils are piled up within a relatively small area — about 50 meters square and at all depths in the 10-foot-deep rock formation.

“This is a quarry that contains literally thousands of bones which we want to try to make sense of,” Storrs said. “There’s a mix of preservation of the bones depending on how they are oriented. Some are crushed.”

Although no single dinosaur is laid out at the site in its entirety, there are complete parts of dinosaurs like feet, tail bones and leg bones all together.

“In collecting these bones, we believe we have identified 16 individuals at this one site, and interestingly, every bone that’s known in the body has been found,” he said.

These include delicate neck vertebrae that are perfectly preserved. Most exciting to paleontologists, though, was the discovery of scaly skin impressions.

“When I showed it to a symposium of paleontologists, there was an audible gasp because it’s such a rare find,” Storrs said.

The stone offers some clues to what might have happened. The 10-foot-thick layer of rock is mudstone and siltstone that appears to have been deposited all at once. That’s unusual, Storrs said, and even more so since there are occasional blobs of softer mudstone that appear to have eroded out of a streambank that didn’t travel very far before being trapped in the same mud. If they would have traveled far, they would have broken up.

There were also small, cherty pebbles in the rock — about 2 to 5 centimeters in diameter.

“These are completely alien in a sedimentary environment,” Storrs said, leaving the paleontologists scratching their heads.

Because the fossils were positioned at all different angles, the researchers ruled out the possibility that the bones were swept to their final position by a stream or river. If that were the case, all of the bones would have been lying in a horizontal position and in one direction, Storrs said.

“It’s like a flood, all washing in in one event,” Storrs said. “However, remember, none of the delicate bones were broken up, so they weren’t worked very far. That suggests a quick event.”

What’s more, in digging through the mudstone, a few scattered teeth of Allosaurus predators were found. There were also what appeared to be bite marks on some of the diplodocus bones from these ancient scavengers.

“It’s an unusual set of clues, not your average stream washing these fossils down,” he said.

Based on all of the clues, here’s what Storrs and his colleagues concluded. A group of juvenile diplodocus dinosaurs, probably migrating with adults in search of one of the wetter areas, died en masse near a shrinking waterhole. Only the juveniles died because they are less able to go long periods without water, similar to elephants today.

The weather was hot and dry, allowing the skin of some of the dinosaurs to dessicate and harden. A few Allosaurus dinosaurs may have come along and dined on the juveniles’ remains, shedding a few teeth in the process and scattering some of the remains.

When rain did finally return, a downpour caused the slightly sloped soil on which the dead dinosaurs were strewn to slide in one big sloughing event, burying all of the bones at odd angles.

“It traveled a quarter-mile at most,” Storrs said. “As it flows downslope, it dewaters and freezes like cement, which explains why the bones are at different angles.”

Storrs believes that the small pebbles found in the mudstone are gastroliths, stones swallowed by plant-eating dinosaurs to help their stomachs break up the tough fibrous vegetation they ate. In one place where a dozen of the stones were found all together amid black carbon, Storrs hypothesized that the black was the organic matter in the stomach of one of the dinosaurs, explaining why all of the rocks were together — it was the petrified contents of a stomach.

“And this, this is really something,” Storrs said, showing a photograph. “This is part of a neck vertebrae sticking up out of the rock and surrounded by skin. It’s a petrified (cross-section of a) neck. I have never seen anything like that.”

The Cincinnati Museum didn’t work the Mother’s Day Quarry this summer, and may not next year, either. Storrs said he’s had a tough time finding assistants to organize the field trips. Plus, the most accessible part of the site has already been excavated. To proceed would require the removal of a large amount of overlying stone and soil.

“I think we’ve reached the point, resource-wise, of diminishing returns,” he said. “Plus, everything now is starting to duplicate what we found before. We’re probably not getting any more additional data to substantially change what we know.”

In a region of Montana known for a 1960s fossil discovery that forever altered paleontologists’ concepts of dinosaurs, Michael D’Emic may have…

Petrified dinosaur skin is revealed in a fossil from the Mother's Day site in Carbon County.

Glenn Storrs, left, helps haul a dinosaur fossil on a contraption made from two hospital gurneys and a motorcycle wheel, dubbed the dino wheel.

This map shows the distribution and orientation of bones at the Mother's Day site. The lines mark 1-meter squares.

Cincinnati Museum Center field school volunteers helped remove, clean and catalog bones at the site over a period of 11 years.

Tarps helped shade workers as they dug up the dinosaur fossils using everything from hammers to dental picks.