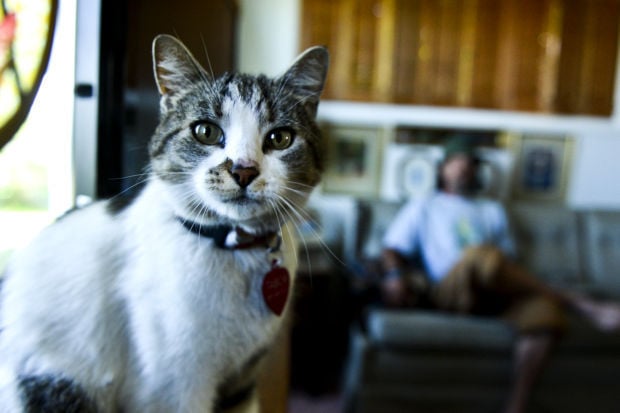 Tabor sits on the television stand inside the home of Michael King’s foster parent, Walter Ebert, on Saturday. Tabor, whose real name is Mata, has been traveling the West with King since last September. 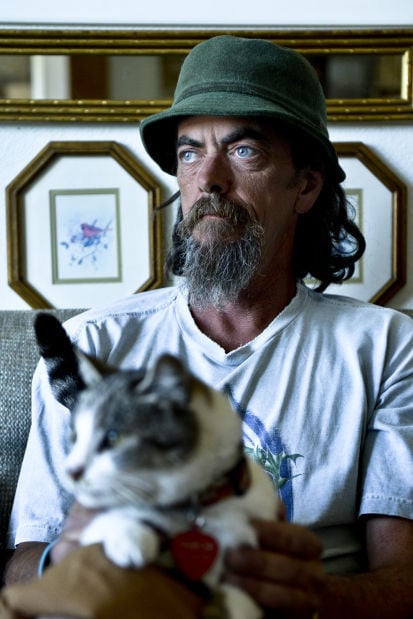 HELENA — Ron Buss had given up hope.

Ten months had passed since he had let his cat Mata Hairi out and noticed that she hadn’t returned that night to his Portland, Ore., home.

Mata and her brother, Creto, are part of a litter of five kittens that had been abandoned on a neighbor’s porch. The neighbor was in the process of moving, and Buss took in the four tiny, 2-week-old kittens that remained in the litter.

He fed them with an eyedropper, ground up raw meat and gave them the life that could have been just as easily denied them by whoever abandoned them on that porch.

Raising kittens from this age leaves them thinking you’re their mother, he said. The kittens became like children for him.

Buss found homes for two of the kittens and kept the other two, a brother and sister. For more than three years, they were an important part of his life. Sweet cats, they looked after one another and befriended anyone who showed them any kindness.

Mata would usually be waiting on a table outside the home for him to return each evening. On Sept. 1 of last year, the table was empty. Mata was missing.

Rescued from the rain

“I was worried that something happened to her,” he said.

This wasn’t like her, to be gone for more than a few hours at a time. She would usually spend her day wandering a roughly three-block area of the neighborhood and be waiting for Buss at the end of the day.

September had been dry in Portland, just as had been the previous couple of months. But rain arrived by the middle of the month, and Mata was still missing.

Michael King was out in the rain too, just as Mata was on the night that they met.

“It was about midnight on Hawthorne Street in Portland,” he said. The rain was heavy when he saw a cat crouching beneath a cafe table trying to stay out of the downpour.

“Something told me to grab her. I don’t know,” he said as he recounted how he and the cat he would name Tabor, for the cafe where he found her, began their travels.

It was a name that would fit, he explained, if the cat were male or female.

King has been homeless since 2003, he said. His best friend died. He lost his job, and then his ability to pay his rent.

“I packed two backpacks and just walked away from everything,” he said.

King sports a summer tan as brown as the canvas pants that he wears. Long black and gray hair hints at his 48 years. Lanky and tall, with a beard and moustache, he sits in the Helena home of his foster parent, Walt Ebert, and tells the story of how he and Tabor became traveling partners. Tabor, a white cat with patches of dark gray, sleeps atop a table in the room. She’s worn out from a couple of days of camping in the mountains here with King and his friend, Kyle Brecheen. This week King, Brecheen and Tabor will be leaving for their last journey together. Buss is to be reunited with his cat.

“I don’t want a cat, especially a full-grown one.”

A 10-pound cat plus food, bowls, a collar and a leash and whatever else would be needed to care for it would mean another 20 pounds for his pack. This held no appeal for him at all.

Despite all of the disadvantages, he bent over and picked up the cat.

Once he had time to look closely at her, he could see that one of her eyes was puffy from fighting. He began to nurse her back to health. King has had cats since he was a teenager and knew how to care for them. His first two cats, Himalayans, cost his foster father $50.

The cat rode atop his backpack for the three weeks he remained in the neighborhood. He listed the lost cat on Craigslist — the only online bulletin board that Buss said he neglected to check as he began trying to find his cat.

No one claimed her.

With the onset of cold and wet weather as winter approached, King and Tabor began to migrate south.

They hitchhiked to Ventura, Calif., in December before returning to Portland as winter waned and then decided to go to Montana, where he has a brother in Dillon and his foster father in Helena.

He kept the cat on a 10-foot leash as they traveled. He also has a carrier for her so she can go inside it when she wants the security that it offers.

“We’ve traveled 3,600 miles and the cat’s probably got a half mile walking,” King said.

Their return journey to Portland took a while as they visited Yosemite National Park, various hot springs along the way, the headwaters of the Sacramento River and other attractions that caught King’s eye.

Traveling with the cat, he said, was a joy. People who saw them took notice and would often stop and photograph this traveler and his cat.

“I love this cat,” King said. “She’s a hit on the streets of Portland. Very rarely do you see a cat riding on the top of someone’s backpack.”

The two have grown attached emotionally. The cat will stare and meow if King leaves the room, Brecheen said. In the mornings, the cat will lick King’s face to wake him up or tug on his beard if he tries to sleep in.

The journey to Montana took a while, too, but mostly because of failing to get a ride out of Mountain Home, Idaho, until someone agreed to take him to Dillon.

There are framed portraits of Michael and his brother, John, when they were 17 years old on the wall of Ebert’s kitchen. The color has faded somewhat in the 30 years since they were taken. There’s also another photograph of his third foster child. Ebert was a member of Alcoholics Anonymous when Michael King came into his life in 1981, he said.

King was in the process of traveling through Helena at the time, Ebert said, “and that started the journey.”

Now back in Ebert’s home, he and King decided to take the cat to Helena Veterinary Service for a checkup. Ebert still has the long-haired cat King found 13 years ago, and it wanders in and out of the room as King tells his story.

Maddie Parker is a veterinary technician and was working on the day King, Brecheen and Ebert arrived with the cat for a checkup.

They said the cat had been found months ago in Portland, she said.

Parker took the cat and she and Dr. Bruce Armstrong began their examination.

“The cat was in awesome shape,” she said. “He had taken good care of it.”

And during the course of that examination, Parker used a scanner to see if it had a microchip, which help identify a dog or cat that’s found without a collar.

“I didn’t really expect it to have one,” she said of the implant.

She called the microchip company and learned that the cat had been reported missing since September 2012. A message was left with Buss that the veterinary clinic wanted to speak to him.

Buss would never have found his cat without the microchip, she added.

Armstrong would eventually talk to Buss and tell him that his cat had been located.

The cost of veterinary service for the cat and having it scanned for a chip was an expense that King couldn’t afford on his own in the previous time that he had the cat.

This isn’t the first time that the cat has strayed from home. It once jumped into the trunk of a neighbor’s car and ended up in Vancouver, Wash. When the trunk was opened, the cat jumped out and ran into the woods. She lived on her own for six months before being taken to the local humane society. The microchip identified her and allowed Buss to be notified that his cat had been found. Now, the microchip did its job again.

“Both times I thought I was never going to see her again,” Buss said.

Since Mata disappeared this time, her brother, Creto, has been dispirited. He continues to look for Mata. Buss has had trouble too. The night before the call from Helena Veterinary Service came, he said, he was thinking that he’s not getting over the loss, that there’d been no closure.

Now with the pending return of Mata, Buss is planning a party. King will be a part of that celebration.

King agrees this is an occasion for celebration and said, “She’s going to go back home where she belongs.”

Even still, giving her up will be bittersweet for King.

The cat has been an important part of King’s life.

“I really needed the companionship,” he said, his blue eyes wet with tears.

“I’m homeless. Depression is a big thing out there,” King said. “The cat was a rainbow in a dark world.”

Giving her back to Buss will be a positive thing, he said, and just what that will be remains to be seen.

“I didn’t want a cat in the first place. I just thought I was saving someone’s cat. And that’s what I’ve done,” he said. “Now I’ve grown attached to her.”

Tabor sits on the television stand inside the home of Michael King’s foster parent, Walter Ebert, on Saturday. Tabor, whose real name is Mata, has been traveling the West with King since last September.