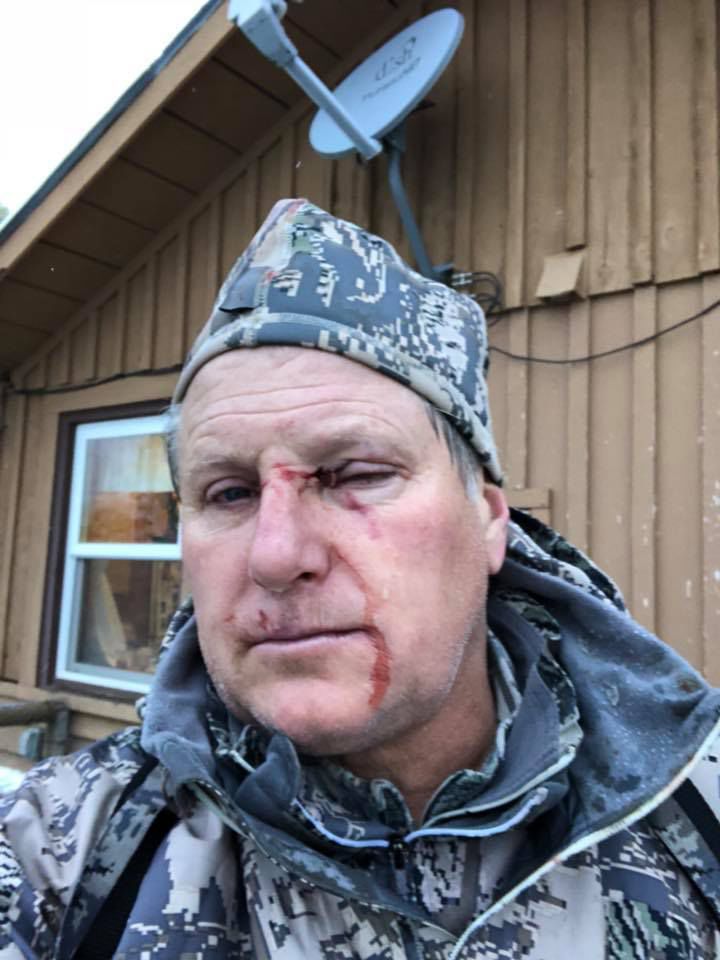 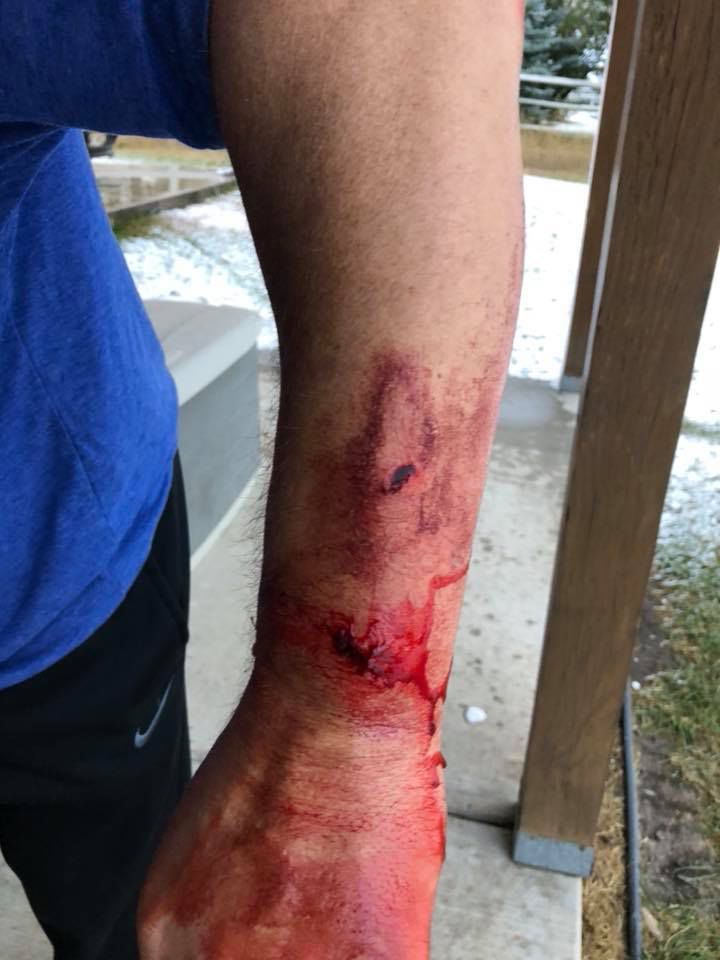 Legasa's left arm has two fang puncture wounds and was broken in two places by the grizzly sow's one bite. 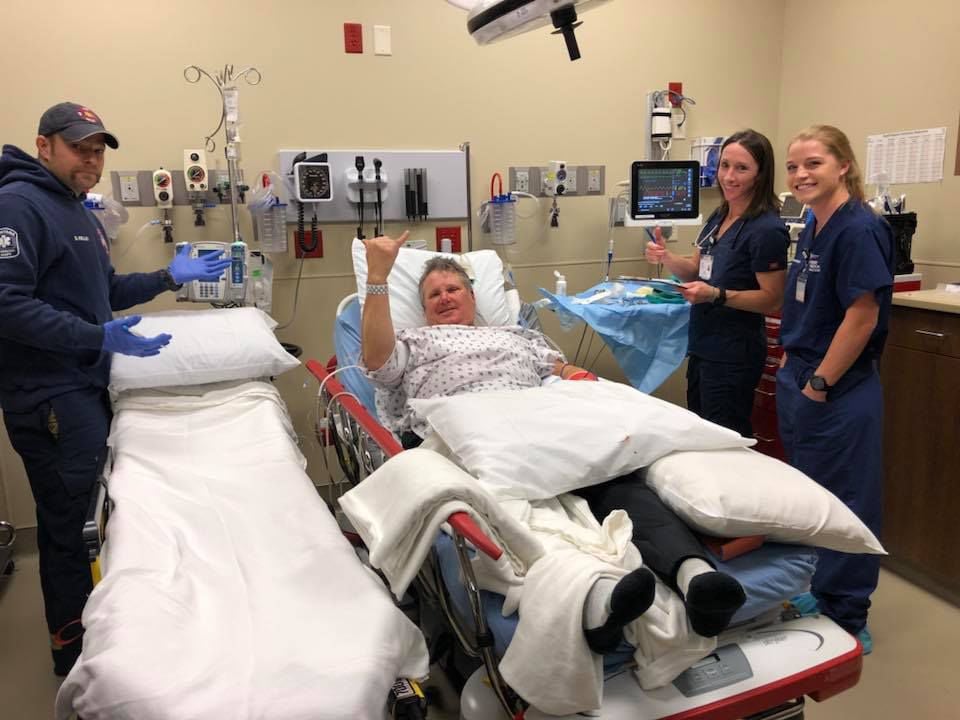 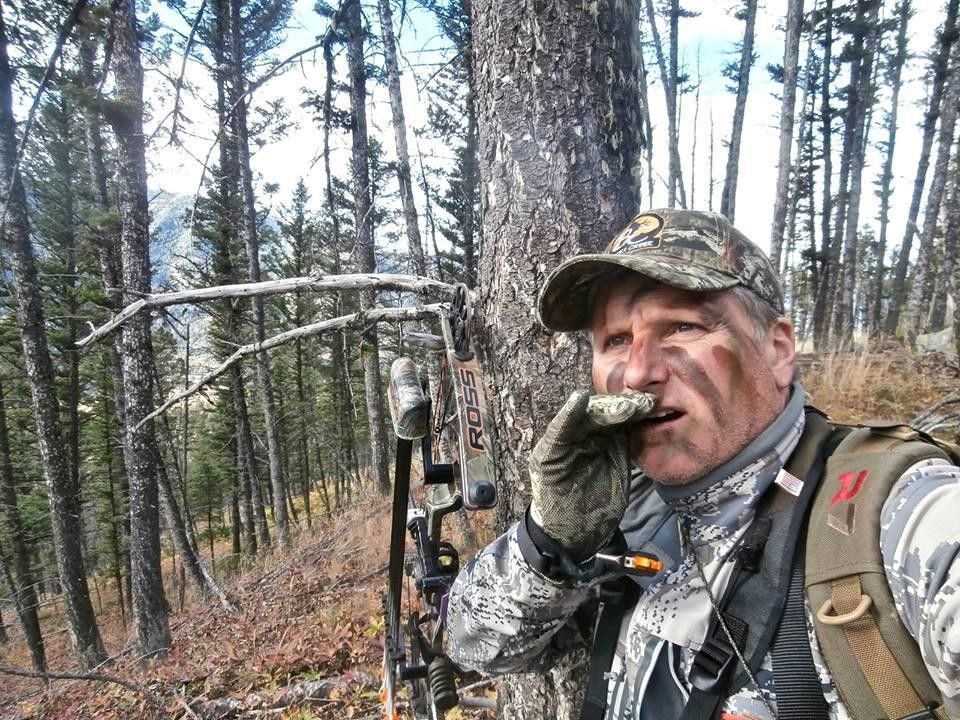 Bob Legasa of Hayden, Idaho, mouths a cow elk call while bowhunting for bull elk in Montana in September 2015.

HELENA — A grizzly bear attacked an elk hunter who surprised the sow and her cub north of Yellowstone National Park, with the bear sinking her teeth into his arm and clawing his eye before another hunter drove her off, the victim recounted Monday.

The mauling of Bob Legasa, 57, in the Gallatin National Forest on Saturday was at least the seventh bear attack on a human since May in the Northern Rocky Mountains.

Legasa, awaiting his second surgery on Monday, told The Associated Press in a phone interview from his hospital room in Bozeman, Montana, that he and his hunting partner were moving toward some elk when he heard a growl.

It was a 2-year-old cub and its mother about 12 yards away from the tree that he had just stepped away from. After the cub growled and moved aside, its mother charged, Legasa said.

The bow hunter from Hayden, Idaho, didn't have time to reach for his bear spray; he barely had time to raise his arms in front of his face.

The grizzly bit his hand, leaving puncture wounds and breaking a bone in his forearm. The sow clawed at his eye, leaving a bloody gash across the bridge of his nose.

His partner and hunting guide, Greg Gibson, discharged bear spray and the grizzly let go. Legasa pulled out his own spray, but inadvertently sprayed himself with the Mace-like mist.

Gibson discharged his spray canister again, and the wind blew the mist back into his eyes as the bears ran off.

Less than three weeks earlier, the two men made a bear spray safety video for Gibson's Montana Guide Service, Legasa said. Now, both were on the ground, blinded by bear spray.

"I had blood in my eyes and bear spray in my eyes and I couldn't see a damn thing," Legasa said. "We were putting snow and water in our eyes, trying to get relief."

The men were eventually able to get back to their truck and drove to a hospital.

Legasa was operated on Saturday to flush out his wounds to prevent infection. On Monday, he was scheduled for another surgery to put in a plate and screw to secure his broken bone.

Montana Fish, Wildlife and Parks officials said in a statement Monday that the bear's response was normal for a sow with a cub encountering a human at close range.

It was the most recent in a spate of bear encounters in Wyoming and Montana, several of which have happened during hunting season when hunters look for deer and elk in bear habitat.

Wyoming and Idaho had been set to open the first grizzly bear hunting season in the Rockies since the 1990s, but a judge intervened last month and said the bears living around Yellowstone still deserved federal protections as a threatened species.

One attack in Wyoming last month killed hunting guide Mark Uptain of Jackson Hole. Separately, a bow hunter on Montana's Blackfeet Indian Reservation reported killing a grizzly that attacked him, and a hunting guide shot another grizzly that charged three people along Wyoming's upper Fork of the Shoshone River.

In May, a grizzly wounded a bear researcher working in the Cabinet Mountains of northwestern Montana. A 10-year-old boy was injured in an attack in Yellowstone park in August while hiking with his family, and a hiker in the Beartooth Mountains on the Montana-Wyoming border in September.

Legasa said the experience won't put him off hunting, a hobby since he was a teenager. But, he added, he will be more cautious in the future.

"I'm always going to have my hunting partner close, and reposition where I carry my bear spray so I can grab it with both hands," he said.

Grizzly bear kills calf near Two Dot, an area where griz are not known to roam

A grizzly bear killed a calf early this week on a ranch north of Two Dot, an area where grizzly bears are not known to roam.

CODY, Wyo. — Wildlife managers in Wyoming are investigating the shooting of a grizzly bear by a hunting guide as the animals become more active searching for food before the harsh winter sets in and as more bears are roaming the landscape.

A wildlife biologist gives tips for what to do if you encounter a cougar or other large carnivore in the wild.

An archery hunter on the Blackleaf Wildlife Management Area used a pistol to kill a sow grizzly and wounded what is presumed to be her subadult cub Wednesday morning, according to a Fish, Wildlife and Parks news release.

Cougars have been in the news this summer.

Daniel Grady, a 26-year-old charged with killing a woman in a drunken hit-and-run in Missoula earlier this year, was sent Friday to an addiction treatment center in Billings before he's gone on trial or even signed a plea deal.

Old grizzly hunting rule still on the books in Montana

When Yogi Berra quipped “it’s déjà vu all over again,” he must have been talking to Yogi Bear.

The Billings Gazette publishes letters from readers in the Opinion section. Here are today's letters.

A Montana man has been charged with sexually abusing a child.

After the mother grizzly bear finished mauling him, after he rubbed the bear spray from his eyes and hiked a half-mile cradling a broken arm, Bob Legasa found himself under attack from a meaner, more unpredictable and entirely more vicious animal: online commenters.

Severed cow head with cigarette in its mouth, elk head found on road in Anaconda area

A severed cow head with a cigarette in its mouth was found in the middle of an Anaconda road on Sunday.

'It was just a snarling mass of grizzly running at me,' Montana elk hunter says from hospital

Legasa's left arm has two fang puncture wounds and was broken in two places by the grizzly sow's one bite.

Bob Legasa of Hayden, Idaho, mouths a cow elk call while bowhunting for bull elk in Montana in September 2015.