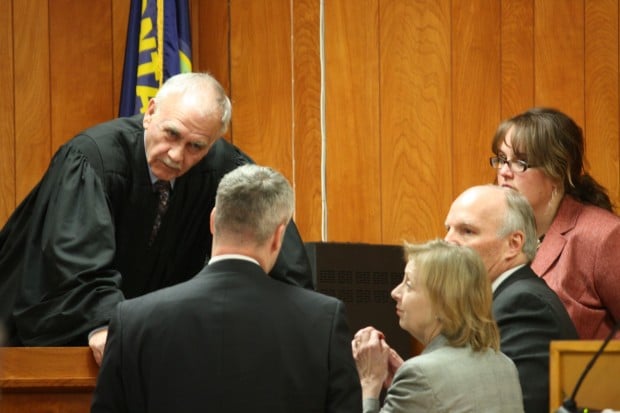 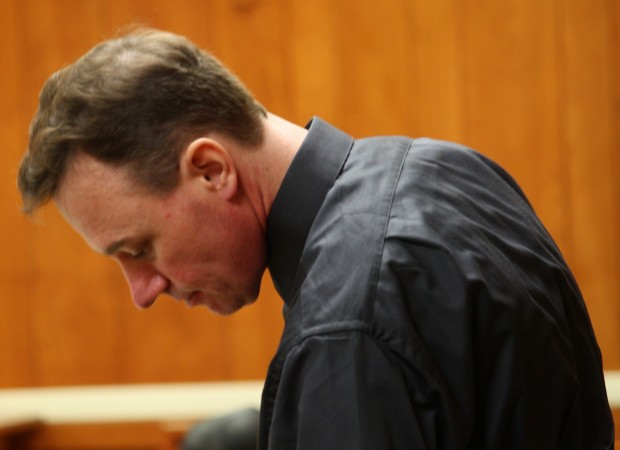 Walter Larson Jr. appears in court Thursday at his trial in the 2008 killing of his ex-wife, Susan Casey. 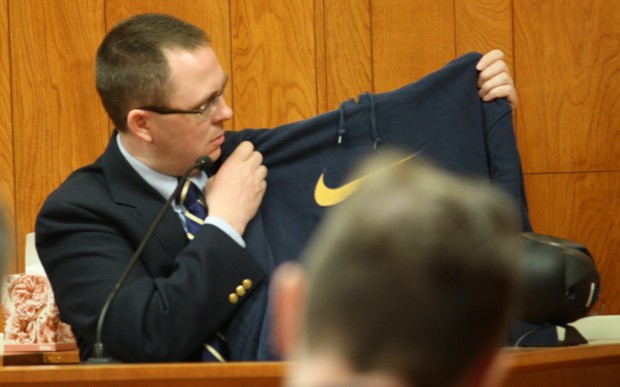 Billings Police Sgt. Shawn Finnegan shows a District Court jury in Glendive a sweatshirt taken from Walter Larson Jr.'s apartment in Billings the day his ex-wife was reported missing. Finnegan and other Billings officers were asked by Glendive police to speak with Larson about Susan Casey's disappearance.

Walter Larson Jr. appears in court Thursday at his trial in the 2008 killing of his ex-wife, Susan Casey.

Billings Police Sgt. Shawn Finnegan shows a District Court jury in Glendive a sweatshirt taken from Walter Larson Jr.'s apartment in Billings the day his ex-wife was reported missing. Finnegan and other Billings officers were asked by Glendive police to speak with Larson about Susan Casey's disappearance.

GLENDIVE — During his first interview with police after his ex-wife was reported missing, Walter Martin “Marty” Larson Jr. told a Billings detective that he still loved her and would never do anything to hurt her.

“She means more to me than I do to myself,” Larson told Detective Shawn Finnegan during an interview five years ago.

“Then get me a lawyer, because there’s nothing else I can tell you to make it make sense,” Larson replied.

A video recording of the two-hour interview was the centerpiece of the prosecution case Thursday as Larson’s murder trial in Dawson County District Court entered its fourth day.

Larson, who turned 42 on Thursday, is charged with deliberate homicide and tampering with evidence in the April 12, 2008 disappearance and death of Susan Casey, a Glendive mother of four who had been married to Larson.

Prosecutors allege that Larson strangled Casey after driving through the night from Billings to Glendive and waiting outside her apartment building. Larson then drove 30 miles west on Interstate 94 and dumped Casey’s body in a remote section of the Yellowstone River near Fallon, according to the prosecution.

Larson is accused of killing Casey in a jealous rage after Casey had spent the night with a new boyfriend.

Larson’s defense team is arguing that Casey’s second husband, Ted Casey, killed the woman in the midst of what had become a bitter divorce.

The trial before Judge Richard Simonton began Monday and will last into next week.

Larson is being represented by public defenders Randi Hood and J. Thomas Bartleson.

The computer expert, Jimmy Weg, told jurors that a forensic analysis of Larson’s computer showed he created an email account that prosecutors say was used to send a harassing email to Casey’s new boyfriend.

The former Miles City police detective, Joshua Stratton, testified that a man recovered a checkbook belonging to Susan Casey from the Yellowstone River just outside of town on April 21, 2008.

Casey’s body was found on May 6, 2008, in the river near Fallon, between Glendive and Miles City.

But most of the testimony at the trial Thursday focused on Finnegan’s interview with Larson. Finnegan said he was called into work on a Saturday to interview Larson at about 6 p.m. Casey had been reported missing a few hours earlier, and Larson was living at an apartment on Yellowstone Avenue in Billings at that time.

A video recording of the interview that took place at the Billings Police Department’s headquarters at City Hall was played for jurors. The interview lasted about two hours.

During the interview, Larson described in detail the new relationship he had with his former wife, saying they had reconnected after 10 years and were planning to reunite the family. The couple had two children, then 12 and 14.

Larson also admitted that he had been hurt to hear through a friend that Casey was recently dating another man, Brad Holzer. Casey had told him that she ended that relationship, Larson said.

Holzer previously testified that he spent the night with Casey before she disappeared, dropping her off shortly after 5 a.m. outside her apartment. Casey was never seen alive again.

Larson told Finnegan that he had grown concerned about Casey the previous evening when he tried numerous times to call and text her with no response. At about 1:30 a.m., he said, he left Billings to drive to Glendive to check on her.

Larson said he arrived outside Casey’s apartment at about 4:30 a.m. and parked around a corner so he would not be seen if Ted Casey drove by. He said he twice went to the apartment and knocked softy on the door so as not to wake the children. He got no answer at the door or to his continued calls or text messages, he said, so he began his return trip to Billings at about 5:30 a.m.

Larson said he figured Casey had been drinking and was asleep because her vehicle was parked outside the apartment.

Finnegan told Larson that he had a hard time believing that Larson would drive that distance and leave before making sure his ex-wife and children were safe.

Finnegan said if Larson was parked outside her apartment, as he described, he would have seen Casey as Holzer dropped her off.

“There is no doubt in my mind that you saw her this morning,” the detective told Larson.

Finnegan pressed harder, asking Larson if he knew where Casey was at the time. Larson said he had “no clue” and repeated that he loved her.