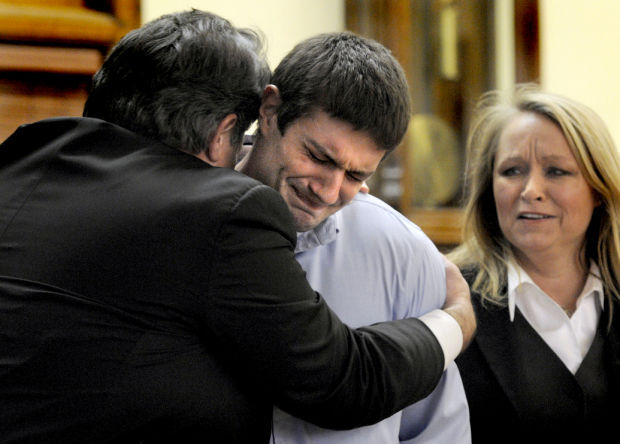 Jordan Johnson, center, leans into the arms of his defense attorney David Paoli Friday afternoon as the not guilty verdict is read in Missoula County District to conclude his trial on charges of rape. At right is another defense attorney, Kirsten Pabst. 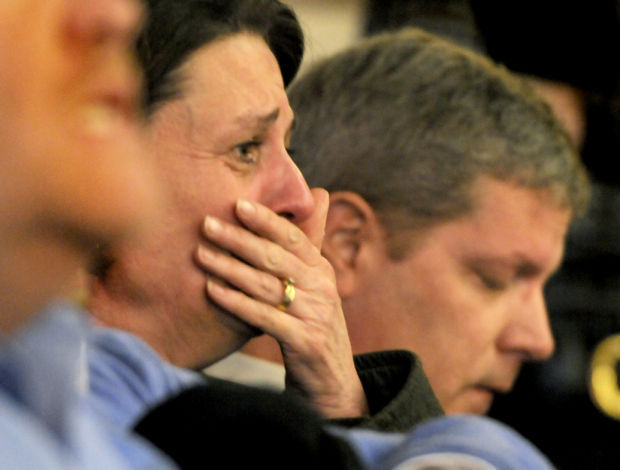 Johnson’s parents react when the verdict was delivered after only 2 1/2 hours of deliberation. 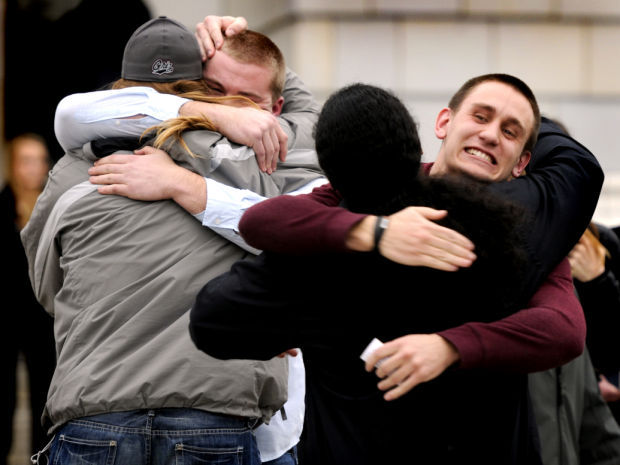 Bo Tully, right, Johnson’s teammate and roommate, and among those who testified in the trial, celebrates with other University of Montana football players outside the courthouse after the verdict. 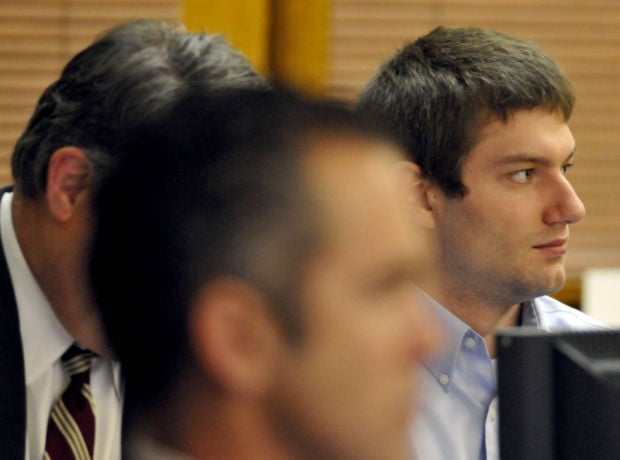 Jordan Johnson, right, watches as final arguments are made in his trial on charges of sexual intercourse without consent Friday morning.

Jordan Johnson, center, leans into the arms of his defense attorney David Paoli Friday afternoon as the not guilty verdict is read in Missoula County District to conclude his trial on charges of rape. At right is another defense attorney, Kirsten Pabst.

Johnson’s parents react when the verdict was delivered after only 2 1/2 hours of deliberation.

Bo Tully, right, Johnson’s teammate and roommate, and among those who testified in the trial, celebrates with other University of Montana football players outside the courthouse after the verdict.

Jordan Johnson, right, watches as final arguments are made in his trial on charges of sexual intercourse without consent Friday morning.

Applause and sobs rang through a Missoula County courtroom Friday as former University of Montana quarterback Jordan Johnson was pronounced not guilty of sexual intercourse without consent.

Johnson’s mother fell into his father’s arms when the verdict was announced. Johnson began to cry, as did Paoli.

District Court Judge Karen Townsend, who had earlier admonished those in the courtroom not to react to the verdict, again asked for quiet in the roomful of Grizzlies players, coaches, family members and other supporters of Johnson.

“He’s just so happy now today that he’s gotten this horrible chapter over with,” defense attorney Kirsten Pabst said outside the courtroom.

On the courthouse steps, Paoli and his defense co-counsel stood in front of television cameras with their arms around each other’s shoulders. One man who had been watching the trial in court for many days turned to Pabst to shake her hand and congratulate her: “Justice was served. Oh God, you did good.”

Although Johnson’s accuser and her immediate family were in the courtroom for closing arguments, they were not present when the verdict was read. A representative for the family said they would have no comment.

“She didn’t want to hurt his family. She could already see what it (pursuing the case) had done to her own family,” Assistant Chief Deputy County Attorney Suzy Boylan said in her closing statement. “But she wanted him to be responsible for what he did.”

One of the jurors said Friday evening that “we were kind of hung up on the fact that we just couldn’t do a conviction because we weren’t sure whether Mr. Johnson was aware of whether the sex was non-consensual.”

“You just can’t convict somebody if you’re not 100 percent, or reasonably sure,” said Donna M. Aucutt, who described the 2 1/2 hours of deliberations as cordial. “It’s a sad case all the way around, with so many people affected. But you’ve just got to go with what the law says ... and there was that little bit of doubt whether Mr. Johnson knew.”

Paoli said the relatively quick verdict was a reflection of his client’s integrity, and honesty, on the witness stand.

“The jury saw Jordan Johnson for who he is,” Paoli said. “He is honest, truthful and humble. And it is unfortunate that (County Attorney) Fred Van Valkenburg couldn’t see that.”

Among those in the courtroom Friday, as he was for the entire trial, was former UM athletic director Jim O’Day.

“The bottom line is that what happened is what I felt needed to happen all along. The judicial system needed to make the decision,” said O’Day, whose son Brian was called as a prosecution witness.

Now, said Jim O’Day, UM needs to make a quick decision in Johnson’s case. Johnson was expelled from UM after its own internal court proceeding in the case, O’Day said, but that decision apparently was put on hold pending the outcome of the trial. Johnson remains enrolled at the school, although he was suspended from the football team after the charge was filed.

Peggy Kuhr, UM vice president for integrated communications, said Friday that university court proceedings are private and she could not discuss them.

O’Day, along with former UM football coach Robin Pflugrad, was fired by UM amid controversy over the Johnson case. That matter, O’Day said Friday, “is still in a legal situation.”

Throughout the trial, Paoli and Pabst made repeated reference to another legal situation, the ongoing federal Department of Justice investigation into how the Missoula County Attorney’s Office, the Missoula Police Department and UM’s campus police handle reports of sexual assault.

That investigation was announced in May, well after the woman reported to police in March that Johnson had raped her. But the County Attorney’s Office didn’t charge him until July.

Van Valkenburg, who watched Friday’s proceedings from the gallery, said the DOJ investigation had nothing to do with the decision to charge Johnson, which he said was based on the evidence.

“The outcome here is a not guilty verdict,” Van Valkenburg said. “It is not an innocent verdict.”

There was never any argument over whether the two had sex. But Johnson maintained all along that it was consensual, telling the seven-woman, five-man jury when he took the stand this week that he would have stopped if the woman had objected.

“If somebody says no, you stop. You respect that,” Johnson said.

Johnson didn’t have to take the stand – no criminal defendant does – but Paoli said his testimony was key to the victory.

“He was direct. He was honest. He was truthful. And the jury knew that,” Paoli said.

The woman, who was the first witness to testify in the 12-day trial, and who spent roughly two days on the stand, said that the two were making out on her bed, and had taken each other’s shirts off, when she first said no. He stopped that time, she testified, but later pushed past her objections.

She said she told him, “ ‘No, not tonight.’ I resisted with my arms, resisted with my knees. ... I told him no.” But she said that he “just changed into a totally different person,” telling the woman, who’d been lying on her back, ‘Turn over or I’ll make you.’ ”

Trial testimony returned repeatedly to text messages sent by and to the woman, including one she sent moments after the incident to her housemate, who was playing video games in the living room.

While the prosecution portrayed that text as evidence of an assault, the defense homed in on the word “think.”

The prosecution team for the trial included Assistant Attorney General Joel Thompson and Adam Duerk, a private attorney who has worked with the County Attorney’s Office on other high-profile cases.

Pabst said the defense has not even discussed the possibility of a civil lawsuit, and Friday her focus was elsewhere. She was pleased Jordan Johnson can move on with his life.

His whole family is pleased, a relative said, and Paoli had earlier noted many relatives came from Oregon to support their loved one during the trial. Lane Johnson, Jordan Johnson’s uncle, said the Johnson family is close knit, and the allegation affected everyone.

“I’m just so happy for Jordy and for (parents) Marty and Kelly. … There was no doubt in my mind this was what the verdict would be,” Lane Johnson said.

He believes Jordan Johnson wants to play football again, and said he hopes his nephew does play. But he said the former quarterback also made it clear on the stand that football wasn’t his whole life; rather, family is his priority.

“He’s as good a kid as I’ve ever seen,” Lane Johnson said, “and it’s neat to me that justice prevailed.”

Missoulian reporter Gwen Florio can be reached at 523-5268, gwen.florio@missoulian.com, or @CopsAndCourts.

Jordan Johnson to jurors: 'She never said no'

Jordan Johnson took the witness stand in his own defense Monday and told a seven-woman, five…

Jordan Johnson may have been the one on trial, but closing arguments in his case Friday focu…

The Missoula County Attorney’s Office needs to get back to the service part of public service.

HELENA – U.S. Sen. Max Baucus’ surprise announcement that he will not seek a seventh term in 2014 was Montana’s top news story of 2013, accord…