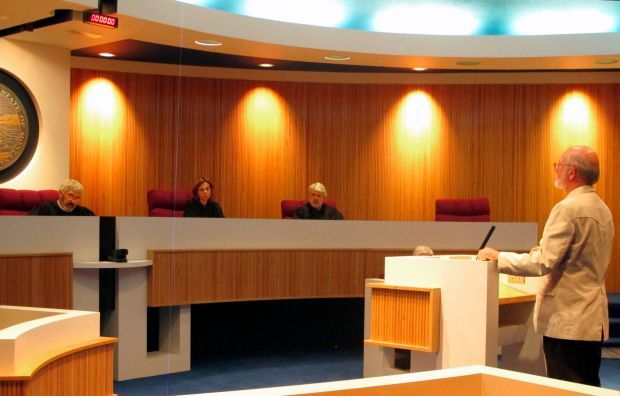 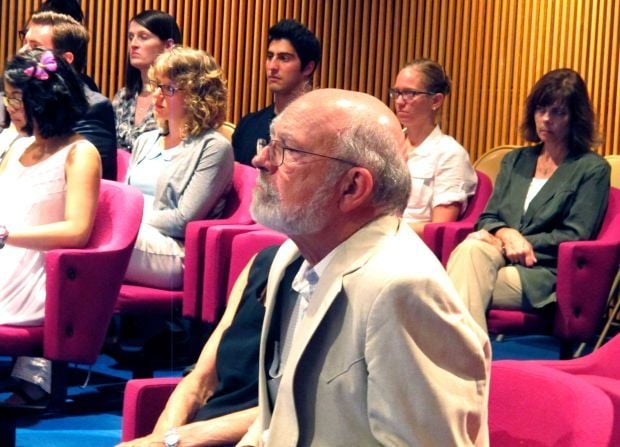 Judge G. Todd Baugh, in July 22, 2014, listens as Montana Chief Justice Mike McGrath begins censure proceedings against him in Helena. The state Supreme Court issued the reprimand for inappropriate comments Baugh made about a 14-year-old girl when he sentenced her rapist to 30 days in jail. 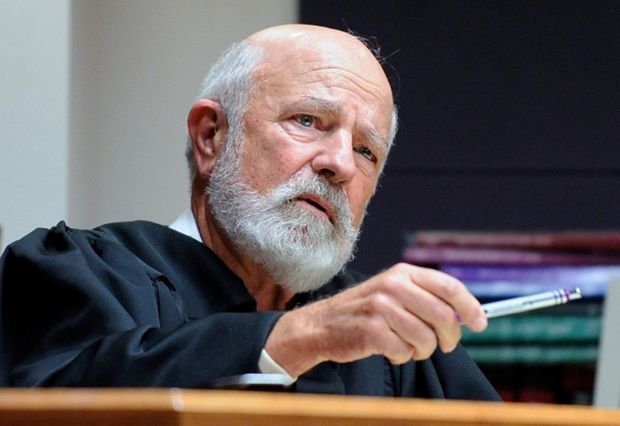 HELENA — The Montana Supreme Court on Tuesday publicly reprimanded a judge who gave a lenient sentence to a rapist after suggesting the 14-year-old victim shared some of the responsibility for the crime.

District Judge G. Todd Baugh, of Billings, appeared before the court in Helena, where Chief Justice Mike McGrath read the prepared censure statement. A censure is a rarely used public declaration by the high court that a judge is guilty of misconduct.

"We have determined that, through your inappropriate comments, you have eroded public confidence in the judiciary and created an appearance of impropriety in violation of the Montana Code of Judicial Conduct," McGrath said. The Supreme Court also suspended him for 31 days, effective in December.

Baugh stood at the podium to receive the reprimand, but he did not speak. McGrath did not read a sentence in the transcript of the censure that asked if Baugh had anything he wanted to say.

Baugh left immediately afterward and did not answer any questions from reporters.

Baugh sent Stacey Dean Rambold to prison for 30 days last year after he pleaded guilty to sexual intercourse without consent.

Rambold was a 47-year-old business teacher at Billings Senior High School at the time of the 2007 rape. The victim was one of his students. She committed suicide while the case was pending trial.

Baugh said during Rambold's sentencing in August that the teenager was "probably as much in control of the situation as the defendant" and that she "appeared older than her chronological age."

After public outcry, Baugh apologized for the comments and acknowledged the short prison sentence violated state law. He attempted to revise it retroactively but was blocked when prosecutors appealed.

Rambold completed the original sentence last fall, registered as a sex offender and was to remain on probation through 2028. But the Supreme Court in April ordered a new sentencing by a different judge. District Judge Randal Spaulding, of Roundup, is scheduled to resentence Rambold on Sept. 26.

Baugh's punishment was recommended by the state's Judicial Standards Commission, which investigated complaints into the comments he made at Rambold's sentencing.

The standards commission can impose or recommend to the Supreme Court disciplinary action if it finds merit in a misconduct complaint filed against a judge. The punishments range from a private letter of admonishment to removal from office.

The Supreme Court accepted the commission's recommendation for Baugh's censure but also added a 31-day suspension that is effective in December. Baugh, who is the son of former Washington Redskins quarterback "Slingin'" Sammy Baugh, previously said he plans to retire when his term expires at the end of that month.

Marian Bradley, president of the Montana chapter of the National Organization for Women, said she would like to see Baugh resign immediately but was pleased with the justices' decision to suspend the judge.

"We believe their actions protect the women, children and families who live in the state and visit the state," she said.

The last Montana judge censured by the state Supreme Court was District Judge Jeffrey Langton, of Hamilton, in 2005. Langton had pleaded guilty to a drunken driving charge, then was placed on probation for violating the terms of his sentence.

View the most-read headlines from the week ending July 125.

Same-sex marriage, a new library and a Senate seat that flipped for the first time in more than a century make The Billings Gazette's Top 10 s…

Judge G. Todd Baugh, in July 22, 2014, listens as Montana Chief Justice Mike McGrath begins censure proceedings against him in Helena. The state Supreme Court issued the reprimand for inappropriate comments Baugh made about a 14-year-old girl when he sentenced her rapist to 30 days in jail.