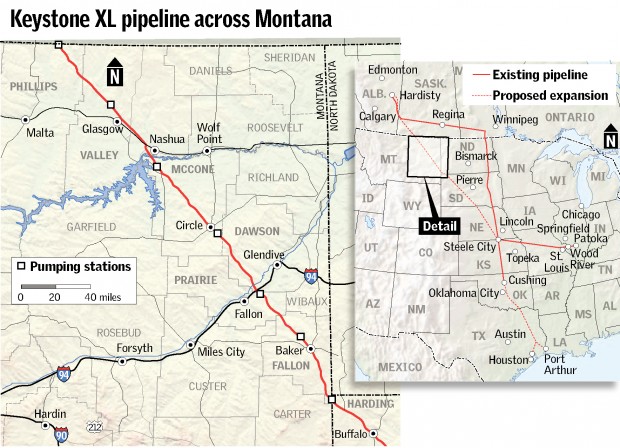 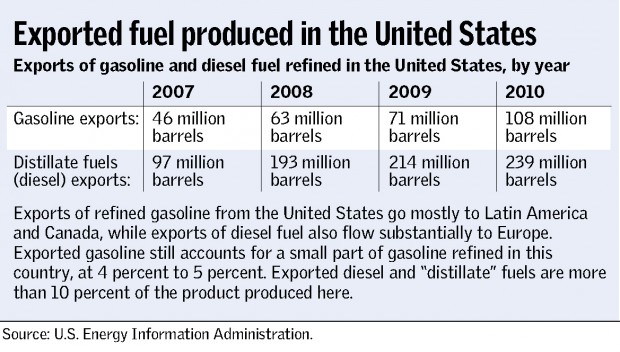 ﻿HELENA — A big selling point for the Keystone XL pipeline is that its billions of barrels of Canadian crude oil would provide “energy security” for the United States, giving the country a long-term, reliable supply of petroleum from a friendly ally.

But some critics of the pipeline are questioning this claim, saying much of the oil could end up as gasoline and diesel fuel exported to Europe and Latin America.

“The oil industry will sell their product where they will get the best price for it, (and) markets for diesel, in particular, are much more profitable abroad,” said Steve Kretzmann of Oil Change International, a clean-energy group opposed to the pipeline. “Those are growing markets. That’s what we base the assertion that this is primarily an export pipeline on.”

Keystone XL, proposed by the Canadian energy giant TransCanada, would be a 1,660-mile pipeline from Alberta to Texas. President Barack Obama is expected to decide by the end of the year whether the pipeline is in the national interest and whether to grant it a special permit.

The $7 billion pipeline, which would cross 280 miles of northeast Montana, would transport up to 830,000 barrels a day of crude oil from the Alberta tar sands to U.S. refineries.

Terry Cunha, a spokesman for TransCanada in Calgary, Alberta, said it’s his understanding that most of the oil will be for domestic use in the United States.

“As we’ve highlighted, why not get (this oil) from Canada, versus importing it from other countries that don’t share the same beliefs as we do in Canada and North America?” he said.

A spokesman for the largest U.S. petroleum refiner, Valero Energy Corp. of San Antonio, Texas, said that while some of the Canadian oil may be refined into products for export, it would be a small part of its overall use.

“Exports are an important part of our marketing effort, but it’s a small part,” Bill Day said. “There is nothing about Keystone XL pipeline that’s going to change that. It’s not set up to be an export pipeline.”

Valero is one of six major companies that have signed up to use three-fourths of the pipeline’s capacity, according to Canadian regulatory documents.

While pipeline backers say oil from Keystone XL is needed to help wean the United States off oil from politically volatile sources in the Middle East and Africa, government data show that the United States got three-fourths of its petroleum from the Western Hemisphere in 2010.

“We’re (already) projecting for the U.S. to be increasingly less dependent on foreign oil,” said Jonathan Cogan of the U.S. Energy Information Administration.

The same agency also is projecting relatively flat demand for petroleum in the United States in the coming years — and reports that exports of gasoline and diesel fuel from U.S. refineries to Latin America and Europe have increased markedly the past few years.

Since 2007, exports of gasoline from the United States have more than doubled and are on pace this year to exceed 150 million barrels, or triple the amount in 2007. Diesel fuel exports have increased sharply as well, from 97 million barrels in 2007 to 239 million barrels last year.

However, they still account for only 15 percent to 20 percent of the gasoline and diesel fuel refined in this country.

Day, of Valero Energy, says about 11 percent of the 1.8 million barrels of fuel refined daily by Valero in the second quarter of this year was exported. The company has 16 U.S. refineries and employs 21,000 people.

Kretzmann, who released a report last month that claims Keystone’s main purpose is to give Canadian oil producers access to international markets, notes that U.S. petroleum production is increasing and demand flattening.

Three of the six companies that have reserved most of the space on Keystone have refineries in a Foreign Trade Zone in Port Arthur, Texas, giving them a competitive edge on exporting fuel, and oil company executives have indicated they want to increase their presence in export markets, he added.

“The pipeline will not do anything other than increase the profits of the oil industry,” Kretzmann said. “It won’t help the energy security of the U.S. Only reducing our consumption of oil overall will do that.”

Day dismisses Kretzmann’s report, saying most of the oil from Canada will definitely be consumed in the United States. And even if some of oil ends up as exported fuel, he says that’s still good for the economy and the oil-refining business, which he calls “one of the last, strong manufacturing industries (in this country) that can compete worldwide.”