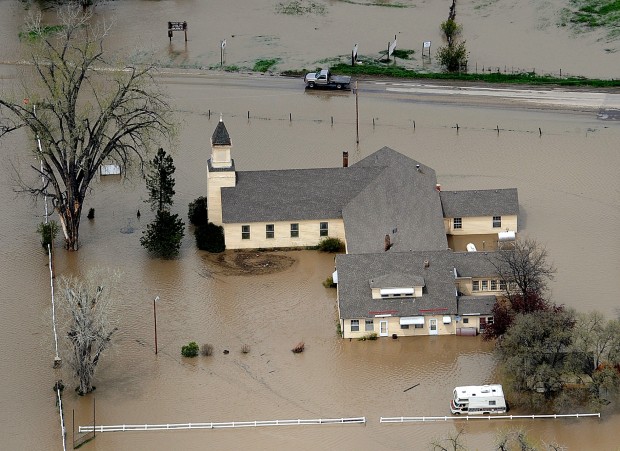 The First Crow Indian Baptist Church in Lodge Grass, seen in May 2011, will have to be torn down and replaced. 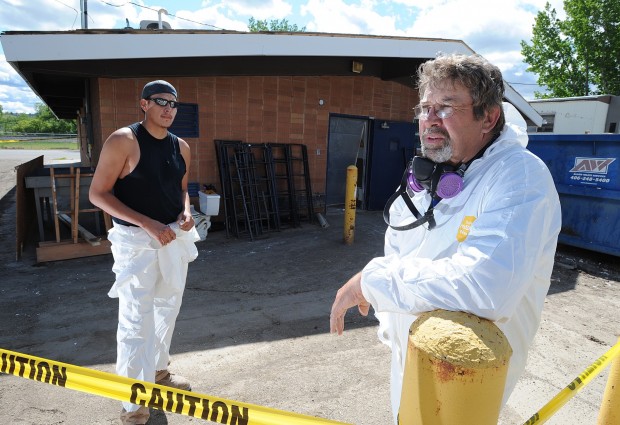 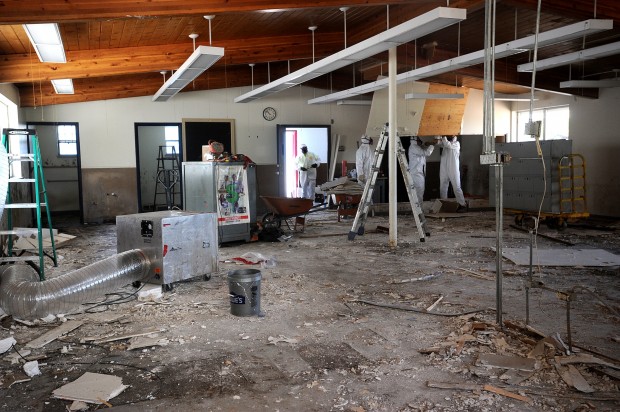 Schroeder Contracting workers clean moldy sheetrock from the Lodge Grass Post Office, which was filled with four feet of water and silt in the May 2011 flood. 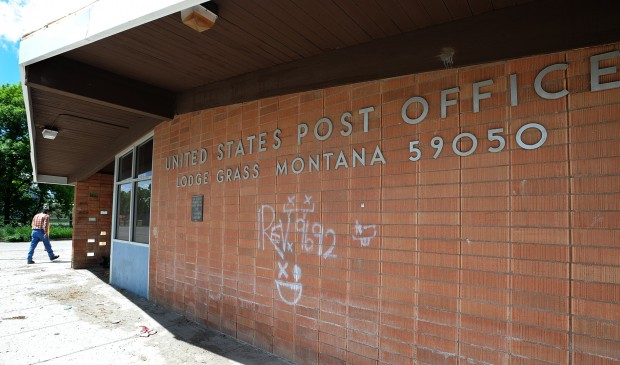 The Lodge Grass Post Office will reopen at the end of June after restoration following flooding in May 2011. 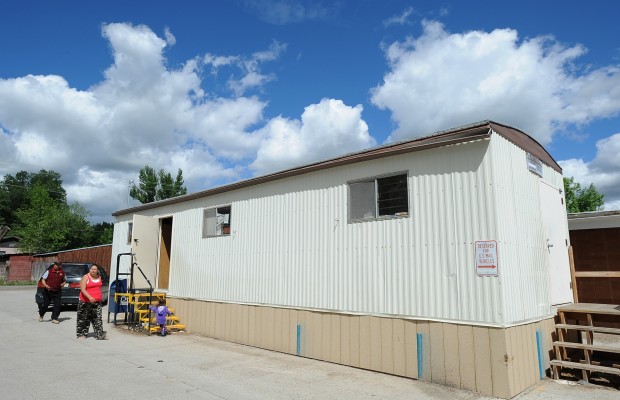 The Lodge Grass Post Office has operated out of a trailer since flooding closed the permanent building.

But the 2011 floods were the point of no return for the church that has stood sentinel at the entrance to Lodge Grass since the 1920s.  It will be torn down and replaced.

“We’re going to have to start over,” said Pastor David Lopez, who is trying to raise $1 million for a new church. It will be built on the same site, he said, but on fill that will elevate it four feet above the high-water mark.

He doesn’t blame the loss entirely on the waterlogged walls or the thick coating of silt left behind when floodwaters receded a year ago.

“After the 1978 flood, it was not mitigated correctly,” the pastor said. “When we went in to take up the floor, we found the floor joists and subfloor rotted out.”

Combined with “bad wiring, bad plumbing and no insulation,” it made no sense to embark on an expensive restoration project, Lopez said. “Our heating bills alone were $2,500 a month. Everything is just too old.”

The congregation, which has been attending services in Lodge Grass High School since last fall, made the decision to replace the church, though it hasn’t been popular with everyone in town. He understands that families have been worshiping there for many generations.

“The new building will be enough similar to the old one that people won’t go into shock,” he said.

The congregation is working to salvage what it can from the existing church, including its stained-glass windows. Lopez hopes to start work in the fall, but “who knows how fundraising will go?”

Lodge Grass, one of the hardest-hit Montana communities in a season of shattering floods in May and June 2011, is still recovering — and tensely monitoring the seasonal rises on Lodge Grass Creek as the snow melts and spring rains fall.

He has patched the streets and the breach in the dike near the railroad tracks where Lodge Grass Creek burst into town. But there are other complications. The town is looking for a grant to fix the sewage lagoon. The system is functioning, Lovato said, but one of its two ponds was filled with sludge and debris during flooding. He said the town is also seeking a grant to shore up about a mile of damaged creek bank.

Townspeople are still waiting for the post office building to reopen. The Lodge Grass Post Office, built in 1968, was filled to the window sills with muddy water. It stood unused and collecting black mold for about a year as the Postal Service decided what to do. A trailer set behind the brick building was never considered a permanent solution.

Sally Tuomi, manager of post office operations in Billings, said the Postal Service considered installing a modular unit specifically designed for rural service. But in the end it proved more economical for the cash-strapped agency to gut and restore the existing building.

“Basically, we’re taking it down to the bricks,” said John Nuckolls, who was working on the project for Schroeder Contracting of Billings in late May. “We’ve got the 30-yard Dumpster full, and I made three trips to the Hardin landfill with my dump trailer. It holds probably 12 to 14 yards.”

First, the asbestos in the roof had to be removed, he said. Then everything inside, from walls to counters, had to be scrapped.

The crew worked in protective clothing and wore breathing apparatus as it tore through the moldy sheetrock and warped furnishings.

“I opened a file drawer and there was still water from the flood inside,” he said.

It smelled terrible when workers first entered, said Chris Dillon, a member of the crew. An unpleasant musty smell wafted from an outside pipe where air from the building was being vented.

Tuomi said she expects the post office building will be back in service by the end of June.

CROW AGENCY — With a little help from her friends and relations, Elsie Half put the pieces of her flood-ravaged home in the Little Bighorn val…

Despite snags, flood recovery moves along

Editor's note: On this first day of a two-day report on the recovery from the floods of 2011, we focus on the Musselshell River region. Monday…

The First Crow Indian Baptist Church in Lodge Grass, seen in May 2011, will have to be torn down and replaced.

Schroeder Contracting workers clean moldy sheetrock from the Lodge Grass Post Office, which was filled with four feet of water and silt in the May 2011 flood.

The Lodge Grass Post Office will reopen at the end of June after restoration following flooding in May 2011.

The Lodge Grass Post Office has operated out of a trailer since flooding closed the permanent building.