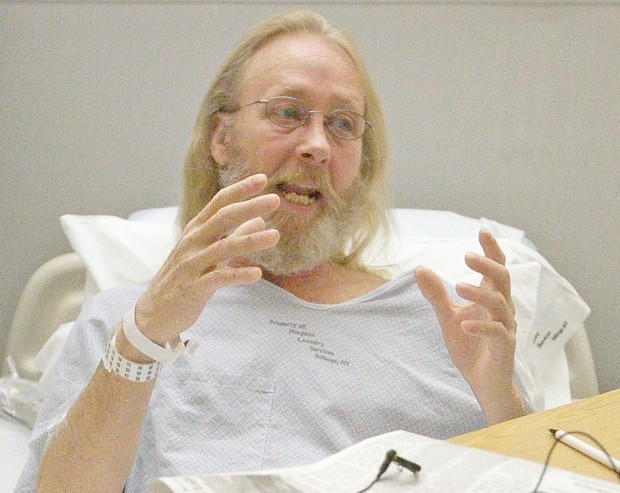 Tim Miller talks about why he shot himself outside the hospital in Miles City. Miller was recovering Wednesday at St. Vincent Healthcare. 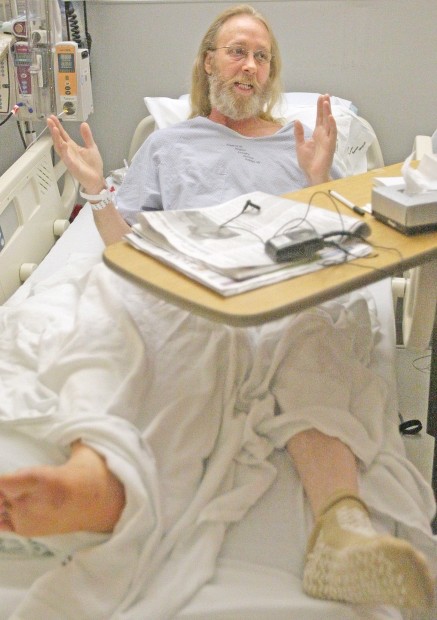 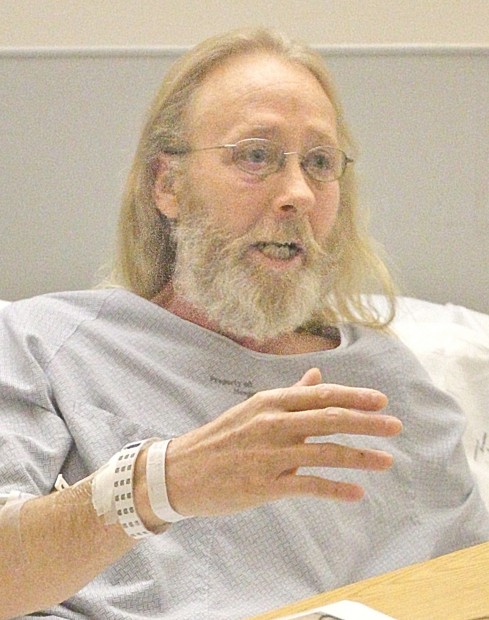 Tim Miller talks Wednesday about shooting himself in Miles City. Miller was recovering at St. Vincent Healthcare in Billings.

By ZACH BENOIT Of The Gazette Staff

Tim Miller, a 48-year-old man who shot himself in the leg outside of the hospital in Miles City on Monday, is recovering at a Billings hospital and said the incident happened because he didn't know what else to do.

"I did not want to do this," he said Wednesday at St. Vincent Healthcare. "I am not suicidal. It was my last resort. I could not take the pain."

Miller, who lives in Miles City, said he began suffering from chronic back pain in late 2010 due to "six vertebrae grinding against each other" after spending decades as a self-employed carpenter.

Doctors at Holy Rosary Healthcare put him on a pain management plan, including the use of morphine pills, he said.

Miller said that the prescription ended this fall when he believes that staff felt he was trying to avoid a drug test at the hospital after an earlier admission to doctors that he illegally smoked marijuana. Miller said he told doctors about his marijuana use from the beginning.

Holy Rosary Healthcare officials could not be reached Wednesday afternoon.

Miles City Police Chief Doug Colombik said Tuesday that Miller left Holy Rosary on Monday upset because his request for painkillers was denied and shot himself in the parking lot. Colombik said the Custer County Attorney's Office will decide whether to file charges.

Miller said that account isn't quite true. He said he and his daughter drove to the hospital and, after she went inside, Miller used a pistol loaded with one round to shoot himself in the leg.

"I did not walk into the hospital," he said. "I was probably 70 feet from the emergency room door and I pointed (the gun) in the exact opposite direction."

Miller said he shot himself because he was desperate to get help with his back pain and didn't know of another way to get it.

"A man can only take so much, and for me, that was 14 months and nine days" of back pain, he said.

Tim Miller talks about why he shot himself outside the hospital in Miles City. Miller was recovering Wednesday at St. Vincent Healthcare.

Tim Miller talks Wednesday about shooting himself in Miles City. Miller was recovering at St. Vincent Healthcare in Billings.