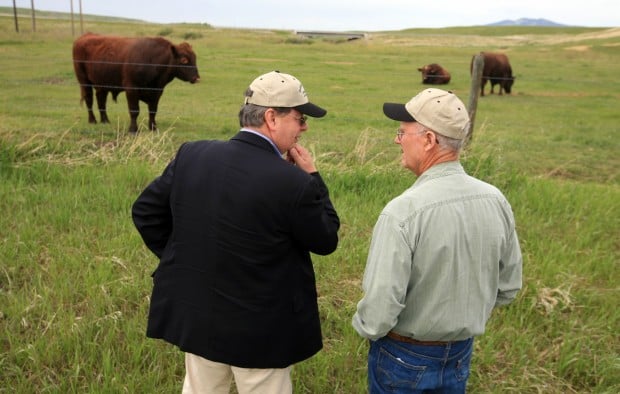 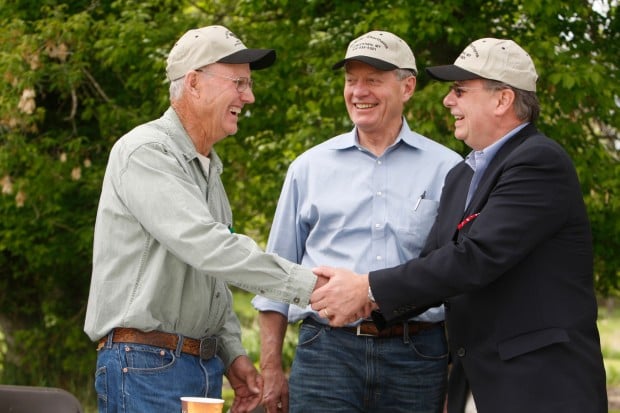 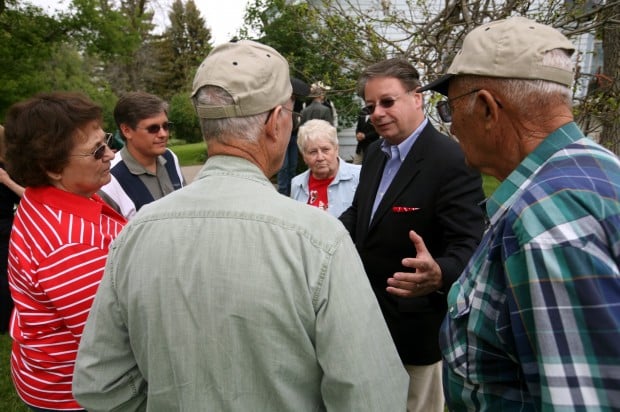 Gabriel Silva, the Colombian ambassador, center facing, talks with Lewistown rancher Tom McMillan, center left, and Callie Ernst, left, Dean McMillan, Madonna Manske, and Ted Dirkson during a visit to the McMillan Shorthorn Ranch on Thursday. The visit commemorated the sale of 50 heifers to be shipped from the ranch to Colombia. 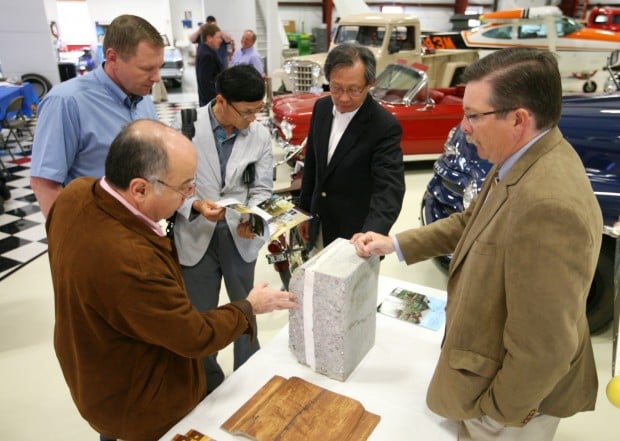 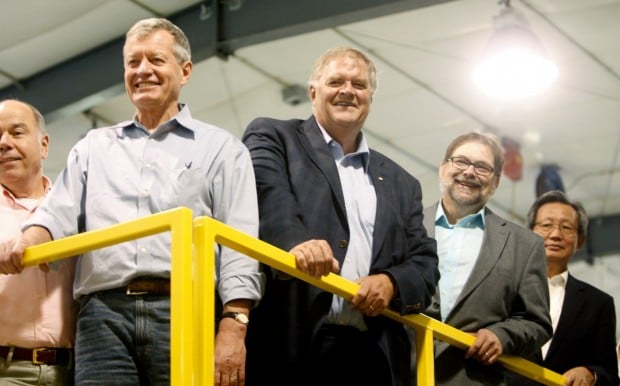 U.S. Sen. Max Baucus, left, poses for a photo with Australian ambassador Kim Beazley, center, and Tom Spika of Spika Welding, right, and other dignitaries during a visit to the plant that is building four sets of maintenance scaffold being shipped to Australia on Thursday. 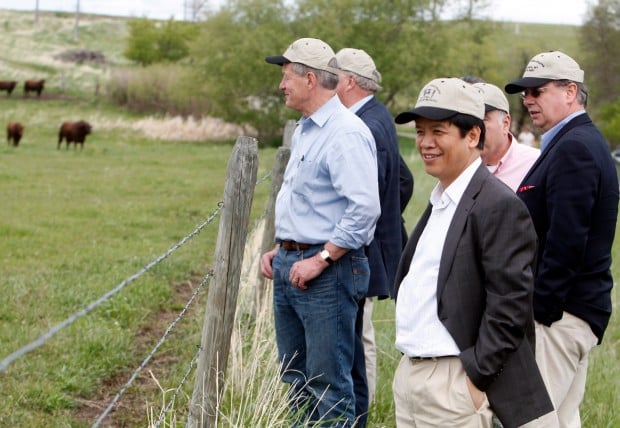 Colombian Ambassador Gabriel Silva made the deal at McMillan Shorthorn Ranch during a trade tour with representatives from four other nations and U.S. Sen. Max Baucus, D-Mont. The ambassador is buying 50 head of Montana cattle for his own ranch.

The sale is significant not for the number of cattle sold, but rather for the message it sends about the safety and quality of American beef. Lowering sale barriers for U.S. beef has been a sticking point in trade negations with other countries, particularly where public sentiment is that the beef is unsafe.

The other nations with ambassadors on the tour were Australia, Brazil, South Korea and Vietnam.

“I will call it a landmark event,” Silva said. “This is the first time we’re going to take live cows from Montana to Colombia and we chose a respectable family with integrity.”

The ambassador sealed the deal Thursday on the family homestead with ranch patriarch Tom McMillan over cookies baked by McMillan’s wife Virginia. The McMillans have been developing its shorthorn cattle herd since 1904.

Colombia was one of several nations to impose restrictions on U.S. beef after mad cow disease was discovered in a Washington dairy cow in 2003. The nation accepts boneless beef cuts and live cattle younger than 30 months, an age where mad cow disease doesn’t materialize.

Just recently enacted, the Colombia Free Trade Agreement eliminates a 12 percent tariff on purchases of live U.S. cattle. Baucus ushered the trade agreement through the U.S. Senate for approval and took Montana businesses on a trade tour of the Colombia last year.

“When the Colombian ambassador chooses Montana cattle for his own personal ranch, it not only supports Montana ranching through that direct sale, it shows the world that Montana beef is 100 percent safe and the best quality around,” Baucus said.

He noted that South Korea, which also has an ambassador on the tour, has a new free trade agreement with the United States, which calls for the promotion of U.S. beef at the retail level to promote sales. Beef trade with that nation is also thawing from a ban stemming from the 2003 mad cow incident.

Baucus said the free trade agreement with South Korea would be crucial for improving sales to other nations in the Asian Pacific, including China.

“The one we’re still working on is China,” Baucus said. “China is still not taking American beef.”

But the focus Thursday was Colombia, whose economy is growing 6 percent a year, Silva said. The nation’s average income has also doubled in the last decade.

Colombia sees an immediate opportunity to boost flower sales to the United States because of the free trade agreement, Silva said. The nation ships a million boxes of flowers and tropical plants to the United States, now with sales of $1 billion a year. Silva expects the industry to grow 4 to 5 percent annually because of the free trade agreement.

In Lewistown, Silva also spoke with a representative of HCR, a manufacturer of door-less, walk-in refrigerator entries, which he said the Colombian flower industry could benefit from.

The ambassadors also stopped at Spika Welding, a Lewistown manufacturer of maintenance scaffolding for military aircraft. There, Australian Ambassador Kim Beazley announced a $530,000 purchase of Spika staging to working on Australian-owned Blackhawk helicopters. That announcement pushed the total value of trade done over the first two days of the tour beyond $2 million, with the Thursday cattle sale, plus $1.5 million in South Korean contracts with Billings-based Mark Rite Line Equipment Company announced the day before.

All five nations on the tour have recently signed, or are negotiating trade agreements with the United States. Baucus is in charge of shepherding all trade agreements through the U.S. Senate. The Colombian Free Trade Agreement and one with South Korea were approved this spring with bipartisan support.

Exports, particularly commodities sales, have been a bright spot in the U.S. economy. The U.S. Department of Agriculture on Thursday forecasted that agriculture exports for the 2012 fiscal year would be the $134.5 billion, the second highest on record and significant to states like Montana, which exports more than 85 percent of its wheat.

Baucus said the Colombian Free Trade Agreement should boost Montana grain sales. Canada entered a free trade agreement with Colombia nearly a year ago, which has given that country a competitive edge in wheat sales. Colombia’s trade agreement activated this spring with the United States levels the playing field, Baucus said.

Globally, there has been a flurry of trade agreements negotiated as nations reposition their footing in a changing global economy. China with a rising middle class and an economy growing as fast as 9 percent a year is aggressively seeking trade agreements, Baucus said, adding that he’s urged Congress and President Barack Obama not to delay on negotiating agreements for the United States.

With a U.S. trade agreement in the bag, Colombia is now negotiating with China. Brazil, the world’s seventh largest economy, is also a trade target of the United States and China. Earlier, Baucus negotiated better trade for U.S. beef in Chile, an arrangement that started with a small Montana cattle sale, similar to the one Thursday between Silva and the McMillans.

“China is making agreements worldwide. China is gaining a foothold on all continents to secure sources of raw materials,” Baucus said. “It’s very important for the United States strategically to be developing agreements, particularly in South America, because if we don’t someone else will.”

The most important reason for eliminating trade barriers is jobs, Baucus said. The tour continues Friday in Bozeman.

Photos of Sen. Max Baucus's tour of Lewistown with ambassadors to the U.S. from five countries.

Gas prices fall below $4 per gallon

Gas prices fall below $4 per gallon

Gabriel Silva, the Colombian ambassador, center facing, talks with Lewistown rancher Tom McMillan, center left, and Callie Ernst, left, Dean McMillan, Madonna Manske, and Ted Dirkson during a visit to the McMillan Shorthorn Ranch on Thursday. The visit commemorated the sale of 50 heifers to be shipped from the ranch to Colombia.

U.S. Sen. Max Baucus, left, poses for a photo with Australian ambassador Kim Beazley, center, and Tom Spika of Spika Welding, right, and other dignitaries during a visit to the plant that is building four sets of maintenance scaffold being shipped to Australia on Thursday.