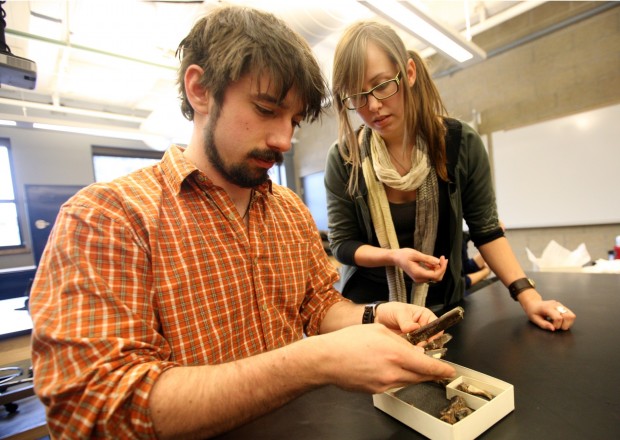 Nathan Carroll and Jade Simon examine foot bones of a fast-moving, birdlike dinosaur in the paleo-lab at Montana State University. They consult with the Museum of the Rockies to confirm identifications of fossils in the Carter County Museum collection. 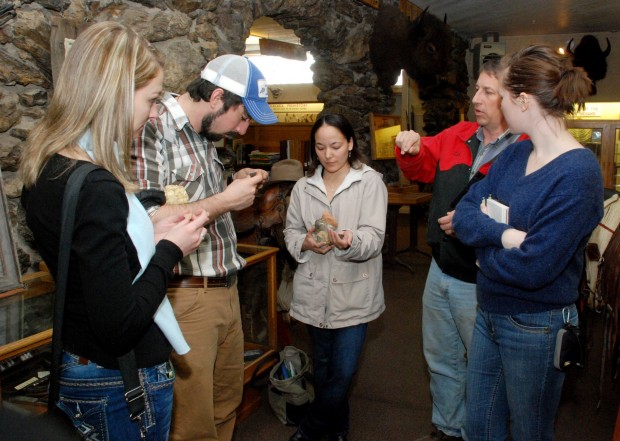 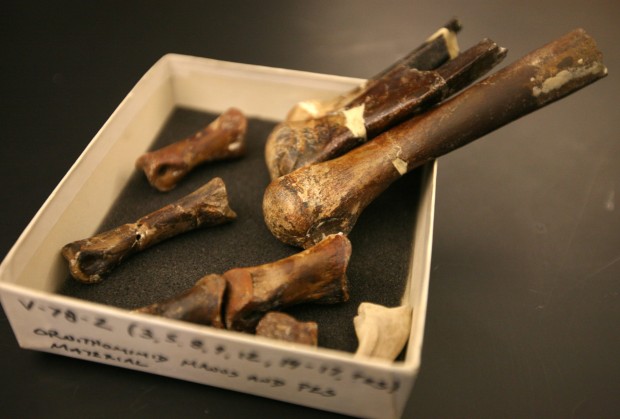 Foot and hand bones from a birdlike ornithomimid dinosaur are some of the fossils from the Carter County Museum in Ekalaka that curator Nathan Carroll has brought to Montana State University to research and identify. 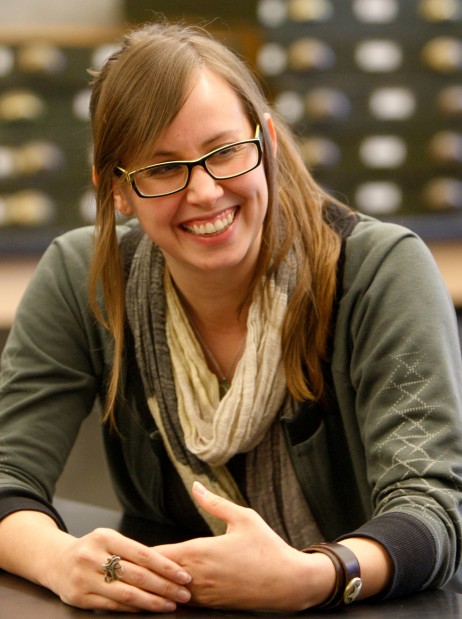 Jade Simon, a graduate student from Charleston, W.Va., is helping with the dinosaur collection at the Carter County Museum. 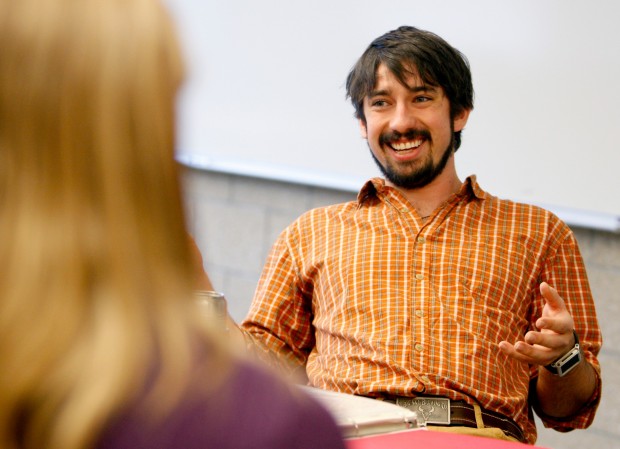 Nathan Carroll talks about his work at the Carter County Museum in Ekalaka. 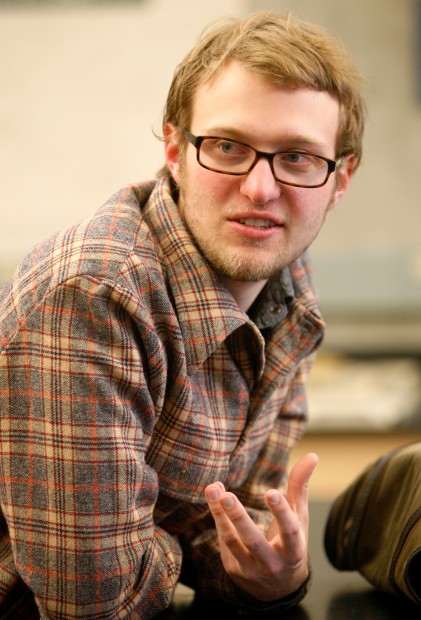 Derek Brouwer is working on the collection and history projects this summer at the Carter County Museum. 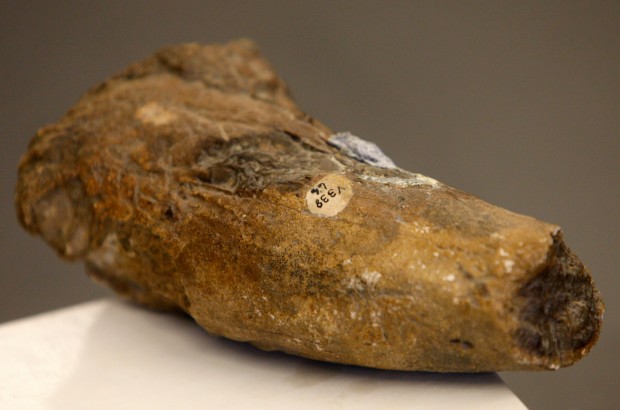 A juvenile triceratops horn is one of the fossils from the Carter County Museum in Ekalaka that curator Nathan Carroll has brought to Montana State University to research and identify. 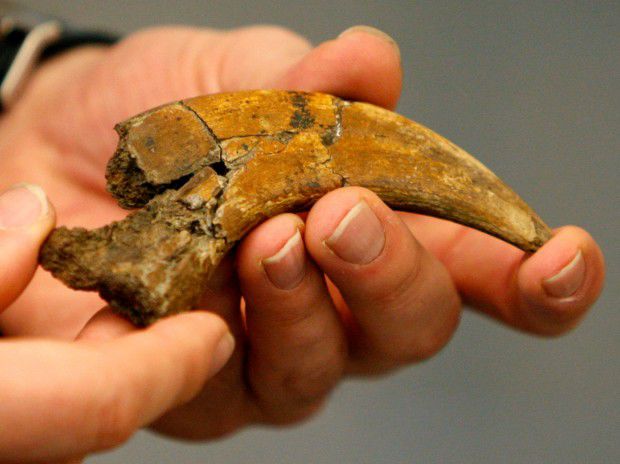 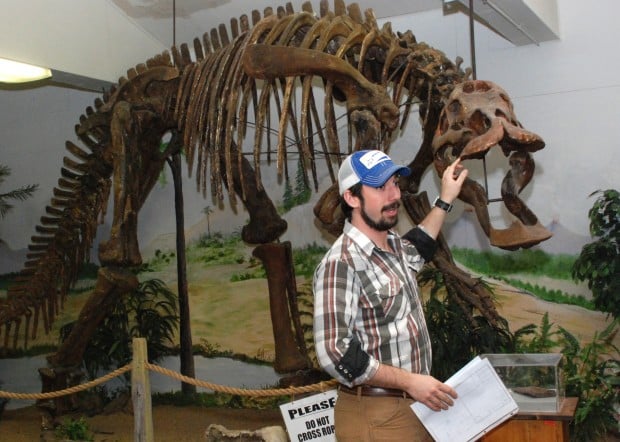 Tyrannosaurus rex stomped the subtropical delta in what is now Carter County as a seaway that covered much of the interior of the country began to recede 65 to 70 million years ago.

These “tyrant lizard kings” shared their marshy environment with other giants of the Cretaceous — frilly-headed triceratops, dome-skulled pachycephalosaurus and fleet, birdlike ornithomimids.

Quirks of nature preserved their skeletal remains in what became remote ranching country in southeast Montana. Fossils buried beneath the ancient shore — some of the rarest yet found — have drawn the biggest names in paleontology for more than a century.

“These are the names that are in all the textbooks,” said Nathan Carroll, curator of the Carter County Museum.

They came from Yale, the Field Museum, the Smithsonian and the American Museum of Natural History.

“You’d be hard-pressed to find big institutions that haven’t worked here at some time in their history,” he said.

Specimens dug from the sprawling Hell Creek formation — geologic strata formed in the last days of the dinosaurs — are displayed in major museums and collections around the country. Hundreds more can be found on the crowded shelves of the Carter County Museum in Ekalaka.

Carroll, who is working on a master’s degree in paleontology at Montana State University in Bozeman during the off seasons, has recruited a team of fellow students — some of them undergraduates working on thesis projects — to take the museum and its unique collection to new levels.

“We want to make it an interesting and fun place to be, and it could really help develop the economy for the community,” said Carroll, an Ekalaka ranch kid who has been doing significant paleontology research since his award-winning high school science fair projects.

Their plans are ambitious — photographing, identifying and cataloging the museum’s world-class collections; putting together long-term development plans; writing grants; researching and preparing dinosaur fossils for new exhibits; planting a native-species garden; expanding a field research station that can be used by paleontologists and other scientists who come from all over the country; and finding a way to fund a new 10,000-square-foot addition with enough space for an impressive dinosaur hall.

“We have enough fossils to fill it up right now,” Carroll said.

The addition could include space for four complete dinosaurs. The museum already has a rare, fully mounted duck-billed Hadrosaur — one of only five similar specimens in the country. It also has a cast of a juvenile Tyrannosaurus rex and enough parts to put together a triceratops.

The students know one another from their days working together on the school newspaper, The Exponent. Only Carroll and Jade Simon, another graduate student, are working toward careers in paleontology. Both were hired last summer by the museum. Together they developed big plans. But to complete their mission, they needed expertise from many other fields.

Hannah Pearce, a landscape design student from Whitefish, will be putting together a low-cost, low-maintenance native-species garden. Tammi Heneveld, a recent graduate in graphic design, will design a website. Sabre Moore, a senior in history and Native American and museum studies from Wright, Wyo., will help redesign the Native American exhibits. Derek Brouwer, a senior in history and religious studies from Pittsburgh, Pa., will work on museum collection management and developing a history of paleontology in Carter County. Matt Kennedy, a sophomore in anthropology from Whitefish, rounds out the team.

“There’s definitely still room for a marketing major or a business major to look at paleo-tourism,” Carroll said.

The team is doing its own bit of paleo-marketing this summer with a grant from the Montana Department of Commerce. They’re cooking up a “Dino-Shindig” for July 26 and 27, recruiting paleontologists and other experts doing research in Carter County to share what they are discovering with locals and visitors. Among those on board are Jack Horner of the Museum of the Rockies in Bozeman and Thomas Carr of Carthage College in Wisconsin, who studies the growth of T-rex.

The museum revitalization is a pilot project for a new MSU program called SCOPE — Student Community Outreach Projects. The objective is to provide students with hands-on experience while helping communities with worthwhile projects.

“MSU is a land-grant school,” Carroll said. “Part of its mission has always been community outreach.”

Many of the students have already visited the museum and most plan to spend at least part of the summer working, studying and volunteering in Ekalaka. They will be staying in a bunkhouse loaned rent-free by Beaver Creek Rendezvous, a hunting camp for physically challenged hunters.

“Our primary focus is ‘How will this project benefit the community?’ ” Brouwer said.

The team hopes to provide at least one weekly community event this summer — kids days, movies on the lawn, lectures and perhaps some classes on preparing dinosaur bones.

Enthusiasm for paleontology and local history has always been high in Carter County. Locals, especially county commissioners and the museum board, have put in tens of thousands of hours since the museum became Montana’s first chartered county museum nearly 80 years ago.

To help the project along, the county dedicated 3.61 mills to the museum, according to Commissioner Bill Loehding. A mill in Carter County is worth about $28,000. The county had enough to spare thanks to TransCanada’s Bison Natural Gas Pipeline, he said.

“The mill value is way up because the Bison Pipeline tripled our taxable value,” Loehding said. “The county is much better off.”

A new full-time museum director, Chioko Hammel, is already on board.

The commissioner said the community and the museum board are excited about what the project may bring.

Carroll said he hopes everyone will want to participate. He and Fallon/Carter extension agent Elin Westover have already been talking about the possibility of a Master Gardeners class planting the heritage garden that Pearce will design.

Volunteers could also help with heavy lifting, cataloging, photography and even removing dinosaur bones from rocks sitting in the museum warehouse.

“We have jackets that haven’t been opened since they were collected in the 1930s,” Carroll said. “We hope to get a volunteer program going. I’m very willing to teach as many people as possible to prepare fossils.”

Part of the redesign plan is to make the museum more accessible and user-friendly. They want to help integrate the museum into the school curriculum by making it useful for classes studying both science and history. Moore said the museum could help the school district invigorate its Indian education program.

“We want them to have so much fun they won’t know they are learning,” Simon said.

Dinosaurs aren’t the only focus of the museum. The team will be working on all aspects of Carter County history and prehistory.

“It’s a walk through 80 million years of time,” Simon said.

Carter County’s human history began at the receding edges of the last glaciers. Extinct cave bears, camels, saber-tooth tigers, dire wolves, bison and horses shared the landscape with these earliest inhabitants. Remains of some very large Ice Age species, including a giant bison skull, can be found in the museum.

Many thousands of years later, the Sioux, Crow, Northern Cheyenne and Mandan roamed the hunting grounds of Carter County. Then cattlemen came, and after them, homesteaders.

But for Carroll and Simon, it all comes back to dinosaurs.

“Dinosaurs are the gateway drug to science,” Simon said enthusiastically.

And there is still so much to learn. Some of the big questions may be answered in the fossil-rich formations in Carter County: Are the small dinosaurs that have been recovered unique species or do they represent different growth stages of the giants that ruled the earth? Why haven’t dinosaur eggs been found along with the bones? What does their absence say about their breeding habits?

“The thing about dinosaurs is they are really weird and crazy,” Carroll said. “There is so much we don’t know, like how big a heart did they need to pump blood two or three stories up to their brain?”

The museum's hours are 9 a.m. to noon and 1 to 5 p.m. Tuesday through Friday during the winter. Starting April 1, the museum will be open five days a week. Weekend hours are 1 to 5 p.m.

The museum is free.

Students and graduates of Montana State University are working with the Carter County Museum in Ekalaka to improve and expand exhibits.

Jack Horner: Go ahead and cut into bones to learn dinosaurs' secrets

BOZEMAN — Dinosaur expert Jack Horner says it's time to get past the idea that dinosaur bones are so precious that they should never be cut open.

Ekalaka really is in the middle of nowhere.

Nathan Carroll and Jade Simon examine foot bones of a fast-moving, birdlike dinosaur in the paleo-lab at Montana State University. They consult with the Museum of the Rockies to confirm identifications of fossils in the Carter County Museum collection.

Foot and hand bones from a birdlike ornithomimid dinosaur are some of the fossils from the Carter County Museum in Ekalaka that curator Nathan Carroll has brought to Montana State University to research and identify.

Jade Simon, a graduate student from Charleston, W.Va., is helping with the dinosaur collection at the Carter County Museum.

Nathan Carroll talks about his work at the Carter County Museum in Ekalaka.

Derek Brouwer is working on the collection and history projects this summer at the Carter County Museum.

A juvenile triceratops horn is one of the fossils from the Carter County Museum in Ekalaka that curator Nathan Carroll has brought to Montana State University to research and identify. 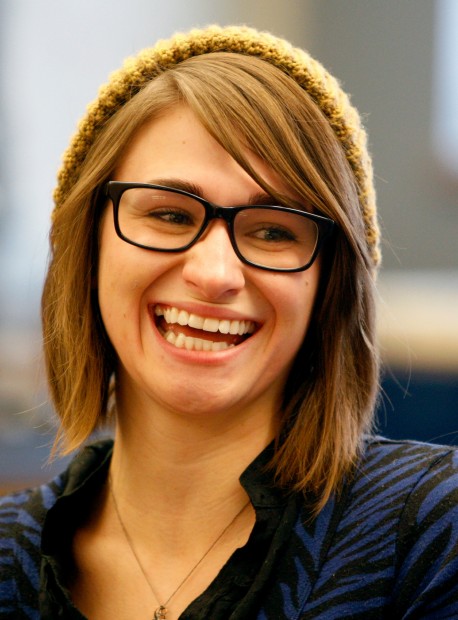 Tammi Heneveld, a recent graduate from Montana State University in graphic design, is preparing a new website for the Carter County Museum. 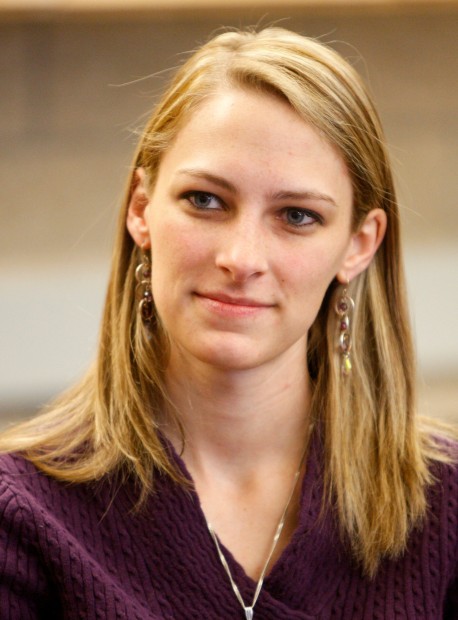 Sabre Moore will redesign Native American exhibits at the Carter County Museum in Ekalaka this summer.