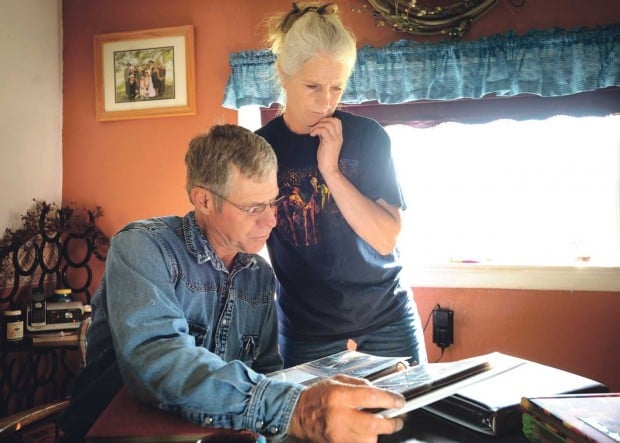 Lowell and Lou Peterson, who used to live on Lynn’s Corner near Belfry, look through their photo albums documenting several wrecks while they lived there. A truck went off the road July 26, killing its occupants in a fiery crash. 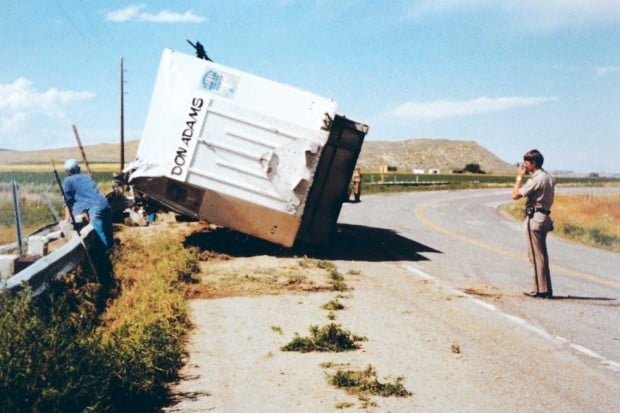 Lowell and Lou Peterson shot this photo of a truck on the corner in the 1980s. 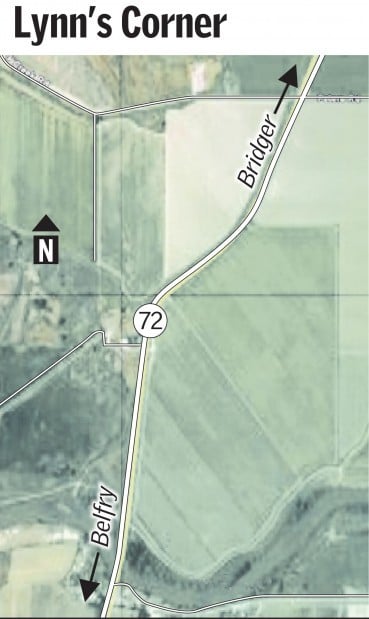 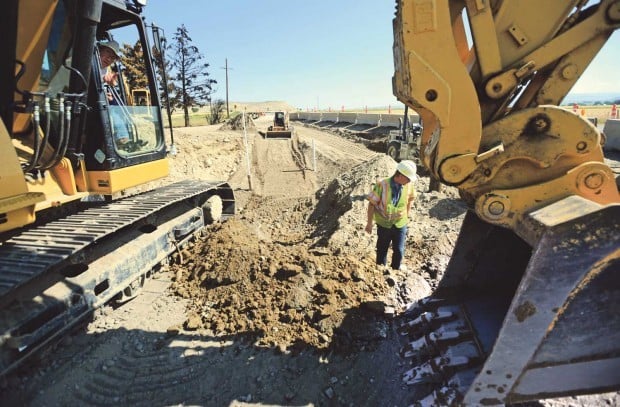 A crew from Hanser’s Automotive and Wrecker works to clean up contaminated soil at the scene of the fatal truck wreck on Lynn’s Corner near Belfry. 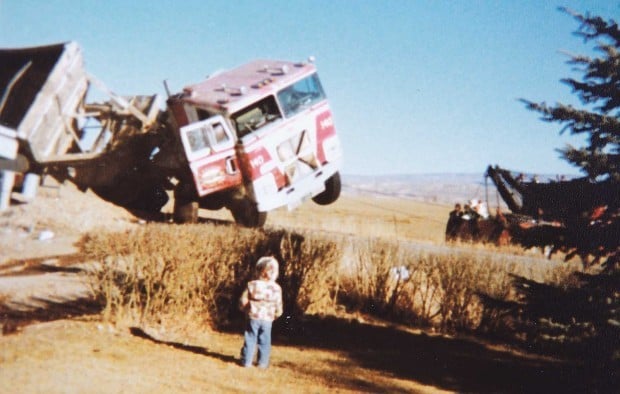 Lowell and Lou Peterson shot this photo of their daughter, Sonya, looking at a truck wreck in their yard in 1981. 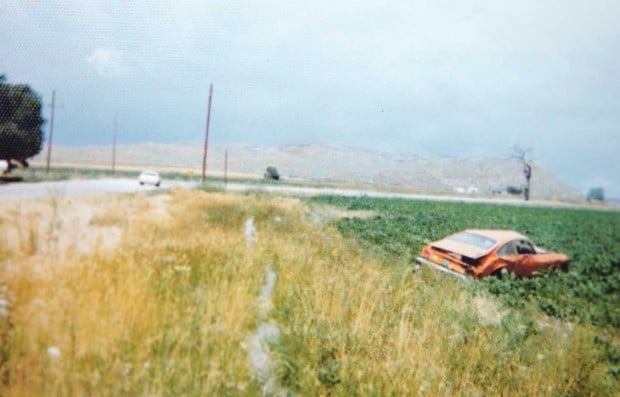 The Petersons have this photo of a car that went off the corner in the 1970s. 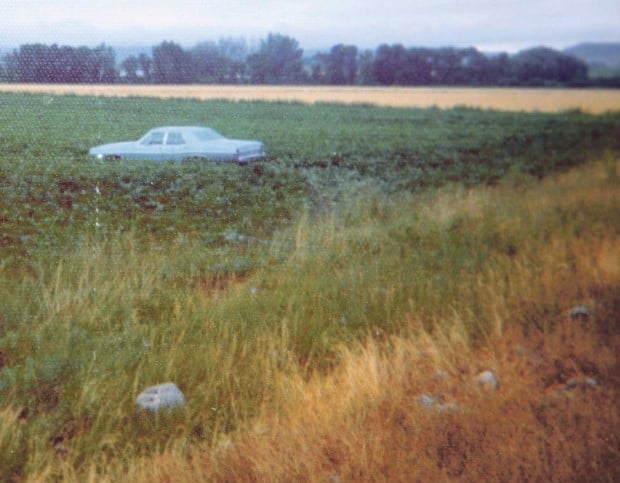 The Petersons recall that at least four accidents a year would occur on Lynn’s Corner, where they lived for a number of years in the 1970s and 80s. 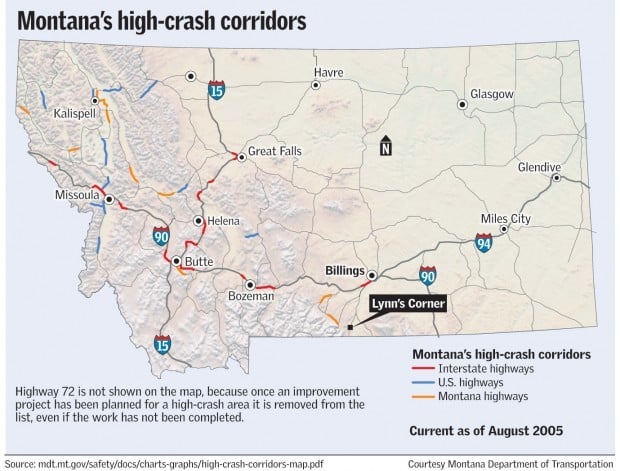 By KAHRIN DEINES Of The Gazette Staff

When a tractor-trailer crash ended in a fiery explosion that killed two people and burned a house on a sleepy stretch of highway between Bridger and Belfry, people living nearby weren't exactly shocked.

They didn't have to be told where the wreck happened. It was on what many know to be a treacherous bend in Highway 72 known as Lynn's Corner, after a family that owned the land around it many years ago.

And despite the tragic proportions of the wreck on July 26 - two lives lost, a family homeless - they could recount a string of disastrous crashes at the same tight turn.

"It's gone on for 30 years that I know of," said Lowell Peterson.

Lowell and his wife, Lou, once lived in the house that was partially burned when the semitrailer hauling diesel exploded in the most recent crash at the corner. Over 13 years, starting in 1974, they had three children there, they worked Peterson Farms with Lowell's family, and they weathered what they remember as at least four accidents a year.

"I don't know what the plans are for that curve, but thank goodness I don't live on that highway anymore," Peterson said.

A 2005 work study prepared for the Montana Department of Transportation found that the Highway 72 corridor north of Belfry fails to meet the state's road standards, and has for many years.

Planning efforts began in the mid-'80s for improving the road, but work hasn't begun because of funding, said Jim Lynch, director of the Montana Department of Transportation.

"We started an environmental document not knowing where the funding was going to be," Lynch said. "What happened is these projects take a long time to get funded."

Lynch said the state has a $10 billion list of needs for its 12,000 miles of highways and roads but receives only about half a billion dollars in annual funding from state and federal sources.

"We have to ask where is our exposure and where do we need to put the resources to maintain a state transportation system," Lynch said.

Between 1992 and 2001, the stretch from Belfry to the intersection with U.S. Highway 310 had a truck crash rate more than double the statewide average for rural highways. The severity rate for those crashes, which reflects injuries and property damage, was nearly three times the state average. The exact same figures were not available for the last 8 years, but vehicle accident and severity rates remained higher for the area than for similar roads between 2004 and 2008.

Lynn's Corner, in particular, is singled out in the 2005 study as a "crash cluster" with "back-to-back substandard curves" and a "high accident history."

The latest accident at Lynn's Corner, which is under investigation by the Montana Highway Patrol, occurred on a bluebird Sunday afternoon, startling Jake and Jessica Hahn, who had been living in the house opposite the curve since last May. They had just settled down for a visit with Jake's dad and his wife when they heard the grinding terror of a semitrailer spinning out of control and then a series of explosions.

"There were flames shooting everywhere in the air," Jessica said. "It was like watching a movie."

The family ran, carrying the Hahn's 4-month-old daughter, to an irrigation creek about a quarter mile to the west of their house. From there, they watched as the flames spread to their rented home. The couple is staying with friends in Clark, Wyo., and searching for a new place to live.

"If that guardrail had given way even a foot earlier the truck would probably have been right in the house," Jessica said.

Kevin and Jodi Woeppel, a Fromberg couple, died in the fiery crash on July 26. They were on their way to Wyoming with a haul of diesel fuel, which exploded in the wreck, sending a blazing funnel of black smoke skyward.

The substandard corner has been a truck trap for as long as the farmers and ranchers living in the sparsely populated Clarks Fork valley can remember. In its time, residents say, it has turned over haulers carrying everything from apples and cattle to logs and fertilizer.

As the Petersons flipped through stacks of photo albums in their dining room recently, pictures of family events were interspersed with shots of one truck after another that had overturned right onto their lawn. Glued in next to photos of their growing children were wrecked vehicles, some looking forlorn in the middle of fields, others torn asunder after skidding to a halt on their side or roof.

"We tried to keep the kids out of the front yard as much as possible, but you know I have old pictures of family picnics right where that fire was," Lou Peterson said, sitting in their new home, which is about a half a mile as the crow flies from Lynn's Corner.

In fact, the Petersons saw so many accidents that Lowell's mother, Beulah Peterson, wrote a letter to the Montana Department of Transportation sometime in 1975 or 1976. She and her husband, Leo, owned the house and land on both sides of the curve, and they offered some of it to the state for free so the corner could be made safer.

Lowell and Lou, meanwhile, developed their own ways of dealing with finding tractor-trailers and cars wrecked in their yard.

"I was a sound sleeper, but when something happened, my wife learned to run out of the house with blankets immediately," Lowell said.

The Montana Highway Patrol officer for the area at the time, Tom Rieger, also gave them his home number. Since the accidents were so frequent, he wanted them to be able to call him any time, Lowell said. The couple believes it was also through his efforts that a guardrail was installed at the corner and suggested - but not legally required - speed limit signs were posted.

Rieger is now the Carbon County Sheriff, but as his law enforcement career has evolved, the road has remained unchanged.

"I took care of a lot of bad wrecks on that corner, and most of them were 18-wheelers," Rieger said recently. "I know we're going to get a new road down there some time, but that's a little way down the road."

As part of a $30 million project, the Montana Transportation Department plans to start reconstructing the Highway 72 corridor between Belfry and U.S. Highway 310 in the summer of 2010. Because the reconstruction plans have been underfunded, the project has been split into three parts.

Lynch said bidding on contracts to rebuild the section with Lynn's Corner will begin in September 2011, if not sooner.

The design plans call for the roadway and shoulders to be widened and the installation of new bridges. The slope on Lynn's Corner is to be changed and its curves softened.

Residents in the area say they will believe it when they see it.

"Every four years they put a new engineer on this road," said Diana Aisenbrey. "For 36 years, we've heard they're going to do something between Bridger and Belfry."

In 2000, Diana's 26-year-old son was killed in a car accident on the fatal turn. Speed was found to be a factor in the accident.

"It's been a hard nine years. Every time an accident happens there I think about Russell," Diana said.

Russell's father, Gordon, pulled him dead from the wrecked car he was riding in with four others, before emergency personnel arrived. He had gone there to check on his cattle and found his son.

Between Russell's death in 2000 and today, the corner has taken at least six lives, and caused many more injuries, by Phyllis Hoskin's estimate.

"I don't know how many people have to die there before they do something about it," said Hoskin, who has been an EMT in the area for the last 10 years.

Before the fiery crash on July 26, Hoskin remembers at least two other truck fatalities in her time riding ambulances. From this spring, she recalls the serious injury of Gary Allan Lawson Jr., of Havre, who wrecked at the corner on his four-wheeler in April. And before that the motorcycle crash that took the life of Kristina Todd of Red Lodge last June.

The Highway Patrol found that excessive speed, alcohol and unfamiliarity with how to handle a bike were factors in Todd's death.

In fact, investigations into many of the accidents at Lynn's Corner have concluded that speed was involved. Truck drivers carrying shifting loads, such as diesel, are especially likely to lose control on the corner if they are going too fast, said Montana Highway Patrol Trooper Bill Bullock.

"It's a terrible corner, a lot of bad things happen there, but you can't blame everything on the road," said Bullock, who has worked as a trooper in the area since 2000. "At some point, there is a responsibility that has to be placed on the driver."

But for those who have seen truck after truck overturn at Lynn's Corner, the road seems like the one factor in the crashes that something could and should be done about.

"We can always find something wrong with the driver after the accident," Lowell Peterson said. "But the real culprit is the Montana Department of Transportation."

Wrecks knock out Belfry power, too

First, I want to say "kudos" to Kahrin Deines on her excellent article regarding the "Notorious Curve near Belfry." She really did her homewor…

2 die in accident near Belfry

Two people died Sunday morning when a tractor trailer traveling southbound on state Highway 72 overturned and caught fire, according to the Mo…

A Fromberg couple died Sunday morning when a truck hauling diesel fuel crashed and caught fire on Highway 72, sending clouds of smoke into the…

Lowell and Lou Peterson, who used to live on Lynn’s Corner near Belfry, look through their photo albums documenting several wrecks while they lived there. A truck went off the road July 26, killing its occupants in a fiery crash.

Lowell and Lou Peterson shot this photo of a truck on the corner in the 1980s.

A crew from Hanser’s Automotive and Wrecker works to clean up contaminated soil at the scene of the fatal truck wreck on Lynn’s Corner near Belfry.

Lowell and Lou Peterson shot this photo of their daughter, Sonya, looking at a truck wreck in their yard in 1981.

The Petersons have this photo of a car that went off the corner in the 1970s.

The Petersons recall that at least four accidents a year would occur on Lynn’s Corner, where they lived for a number of years in the 1970s and 80s.