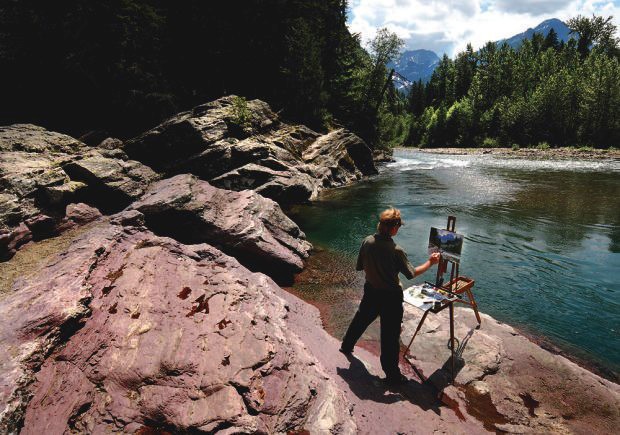 Artist Mark Ogle paints along McDonald Creek at the height of Glacier National Park’s tourist season. Possible upcoming budget cuts could “result in reductions to visitor services, hours of operation, shortening of seasons and possibly the closing of areas,” according to a memo by National Park Service Director Jon Jarvis. 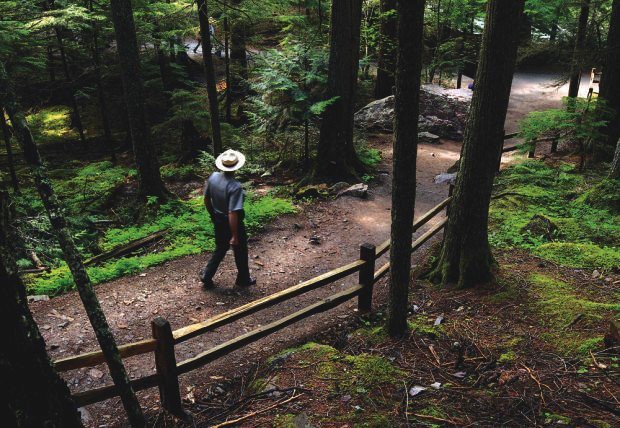 A Glacier National Park ranger walks along the popular Trail of the Cedars. The National Park Service has ordered Glacier to prepare to cut $682,000 from its budget

The memo, written on Jan. 25 by Park Service Director Jon Jarvis and obtained by the Coalition of National Park Service Retirees, outlines the agency’s need to retrench if lawmakers fail to reach a “sequestration” deal by March 1, and explains the chilling effect it would have on park services.

It instructs park officials to begin implementing budget-cut planning immediately, and calls for the potential elimination of seasonal personnel and extended furloughs of permanent employees.

Under the servicewide plan, the agency would need to slash $110 million from the $2.2 billion remaining in its budget over the next seven months, according to the group, even though the proposal comes on the heels of 6 percent in cuts over the past two years.

“This is very troubling and it has the potential to turn already budget-strapped national parks into ghost towns,” retirees coalition chairwoman Maureen Finnerty, former superintendent of Everglades National Park, said.

An attachment to the memo sets forth the exact amounts that would need to be trimmed from each park — about 5 percent across the board — and includes steep cuts of $1.8 million from Yellowstone National Park and $682,000 from Glacier National Park.

The agency memo details how $85 billion in automatic spending cuts scheduled for 2013 would affect the nation’s parks if policymakers fail to reach a long-term deal.

“We expect that a cut of this magnitude, intensified by the lateness of the implementation, will result in reductions to visitor services, hours of operation, shortening of seasons and possibly the closing of areas during periods when there is insufficient staff to ensure the protection of visitors, employees, resources and government assets,” Jarvis concludes in the memo.

Each park must submit a sequestration plan by Feb. 11, and is instructed to specify the number of visitors affected as well as indicate the effect on nearby communities and businesses, according to the memo. Those reports will serve to inform lawmakers on how the sequestration will impact parks and surrounding business communities.

News of the proposed budget cuts perplexed park advocates and Montana’s political leaders, who noted the robust economic value parks provide to surrounding communities and the minimal role they play as a deficit driver — the National Park Service budget amounts to just one-fourteenth of 1 percent of the federal budget.

“It has always been a mystery to me why the National Park Service, which has a very small budget, is put on the same playing field as, say, the Department of Defense,” said former Glacier Park superintendent Mick Holm. “Those proposed cuts would have such devastating consequences to the National Park Service, which has been eroding for years, whereas those same cuts in other departments would not be so significant.”

Jarvis’ memo also instructs officials to postpone making any hiring offers for permanent and seasonal employees, a point that Holm said could be problematic for park officials at a time when they are working to arrange their seasonal workforce.

“The hiring process starts around this time of year so they have employees ready to go when the crowds start to arrive,” Holm said. “That process can really grind to a halt if you don’t have enough time to get folks on board.”

Holm noted that parks have very little discretionary spending, and that budget cuts force administrators to pare back employee hours and reduce services. He said the “continued erosion” would have a direct and immediate effect.

“If this budget proposal comes to pass, the visiting public will see the results right away,” he said. “There will be direct impacts because the only alternative is to cut back hours, cut back staff, stop cleaning restrooms, offer less services.”

The cuts also would sharply reduce the ranks of NPS park rangers, and Holm said there are already fewer rangers in Glacier National Park than there were when he served as superintendent from 2002 to 2008.

“Hopefully,” Jarvis wrote, “the budget issue will be resolved in time to allow you to complete your seasonal hiring.”

U.S. Sen. Max Baucus, D-Mont., said he will continue to advocate for a balanced approach to the nation’s fiscal crisis, and that he understands the role national parks play in supporting jobs and economic development in the state.

“Montanans are outdoor people. We hunt, we fish, we hike and our national parks are part of who we are,” he said. “Just as we owe it to our kids and grandkids to protect our outdoor heritage, we owe it to them to solve our fiscal problems today instead of kicking the can down the road. I’m working hard on a balanced approach to addressing our deficit problem that ensures we’re not damaging key economic drivers to our state and our nation.”

According to the study, which was conducted by a Michigan State University researcher on behalf of the National Park Service, more than 2.2 million visitors to Glacier National Park spent almost $110 million in surrounding communities in 2010, the park’s centennial year. The spending also supported 1,695 jobs, the study shows, providing a boon to the Flathead Valley as it struggles to rebound from the recession.

At Yellowstone National Park, 3.64 million visitors spent $334 million and supported 4,881 jobs, according to the study.

“Montana’s two national parks are treasured for their beauty, but also for the jobs and economic output they provide our local communities,” U.S. Sen. Jon Tester said. “Reducing park hours or services will reduce tourism and have a direct effect on Montana’s $3 billion-a-year recreation economy.”

National parks sustain a quarter-million private-sector jobs and generate $31 billion from tourism and recreation alone, according to figures from the National Parks Conservation Association.

Michael Jamison, Glacier program manager for the NPCA, urged Congress to craft a smart budget plan that focuses on the real deficit drivers rather than enact across-the-board cuts.

“The fact that the National Park Service is actively planning for these cuts shows that they are very, very real, and that by kicking the can down the road Congress has done nothing to deal with the real deficit problems facing our country,” he said. “By enacting blind across-the-board cuts, they will do more damage than good and will impact every single park and every single gateway economy — all while doing nothing of substance to budge the budget.”

Budget cuts to the National Park Service are nothing new, Jamison said, and as the agency has eroded through the years, so too have on-the-ground visitor services suffered at Glacier Park. The park no longer offers overnight ranger-led hikes, no longer has potable water at all campsites and has fewer trail miles.

“These new cuts will not mean doing more with less. Those days are long since passed. These cuts will mean doing less with less. And visitors will notice, as will the regional economy,” Jamison said.

Artist Mark Ogle paints along McDonald Creek at the height of Glacier National Park’s tourist season. Possible upcoming budget cuts could “result in reductions to visitor services, hours of operation, shortening of seasons and possibly the closing of areas,” according to a memo by National Park Service Director Jon Jarvis.

A Glacier National Park ranger walks along the popular Trail of the Cedars. The National Park Service has ordered Glacier to prepare to cut $682,000 from its budget