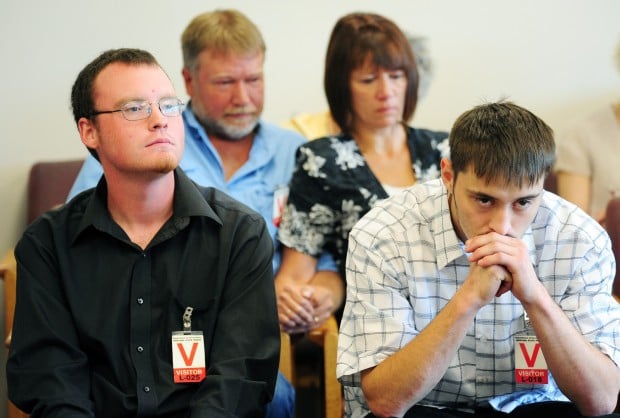 Joseph Wohlers, left, and Kahner Leary, right, listen as testimony is given to the Montana Pardons and Parole Board on Tuesday morning in Deer Lodge. The two young men were shot by Sebastian Olivares-Coster, who is serving three life sentences for the attempted murder of Wohlers and Leary and the murder of Cory Andrewski. Andrewski’s mother and stepfather are behind Wohlers and Leary. 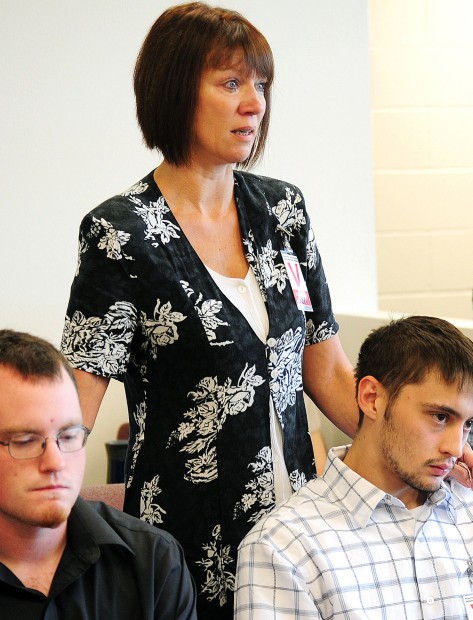 to Sebastian Olivares-Coster, who was convicted of the murder of Andrewski.

DEER LODGE — For the four years since he was shot and nearly killed in Helena by Sebastian Olivares-Coster, Kahner Leary has had trouble sleeping.

He has difficulty with social interactions and holding jobs, not to mention persistent problems in the knee where he was shot.

“I can’t be around people. I have bad anxiety. Any new people I meet I tend to have panic attacks,” he told the Montana Board of Pardons and Parole on Tuesday. “I find myself wondering if just some random person on the street has a gun in their hands.”

Leary was one of seven people, including fellow shooting victim Joseph Wohlers and parents of all three of Olivares-Coster’s victims, who spoke out against his release.

The family members worked successfully in the 2013 Legislature to correct that law. With very little discussion, the three-person board denied parole for Olivares-Coster, who did not appear at the hearing.

Those who did appear talked about how the trauma of that June night remains.

Wohlers said he was hospitalized for more than three months.

“I almost lost my life. I was in a coma. I had to learn how to walk and eat,” he said. “Every day I think about it. Well, actually, I wouldn’t say every day, it’s every second of my life.”

He’s working on resolving the fear, hostility and distrust of others he feels, and figures that fight will go on for the rest of his life.

Wohler was visiting from his current residence, a pre-release center, where he’s serving time related to breaking a window in the Lewis and Clark County Law Enforcement Center long after the shooting. His father, Brian Wohlers, said Joseph had never been in trouble before being shot.

He called Olivares-Coster a “coward.”

“Sebastian didn’t have to … stand in Seattle or at St. Peter’s Hospital and watch these boys fight for their lives,” he said. “He didn’t even give Cory the chance to fight for his life.”

It’s never been made clear exactly why Olivares-Coster shot the boys, whom he did not know well, following a party and apparently provoking a showdown with text messages he sent from another

Olivares-Coster brandished a .45-caliber handgun in what had looked up to that point to be a possible fistfight on Rodney Ridge near the Hale Reservoir.

He shot and killed Andrewski and shot the others, reloading the gun with a second five-bullet clip. After running out of bullets, he pistol-whipped both in the head, breaking his own finger in the process.

He then went home, showered, and went to bed.

Jody Anderson, Andrewski’s mother, said she hopes Olivares-Coster stays in the prison for the rest of his life.

“I’m very, very angry. The fact that we’re here today is a mistake,” said Mick Leary, Kahner’s father. “He doesn’t have the nerve to show up today to face the people he’s hurt. And yet every six years, or however long you decide, we have to come and relive this.”

“He was intending to kill somebody, and from what I can tell, he didn’t care who it was,” she said.

Before the hearing, the families greeted each other with hugs and tears in the bleak waiting area used also by inmates’ visitors.

After surrendering identification, cellphones and other prohibited items to security staff, they passed through a pair of large steel doors, opening and closing with loud crashing sounds, to reach the hearing room, just across a small courtyard from the prison’s high- and low-security areas.

The entire hearing took about 20 minutes.

Olivares-Coster will be eligible for another parole hearing in 2019.

Parole denied for Helena man who killed teen in 2009

A Helena man who killed one teenager and seriously injured two others in a 2009 shooting on Rodney Ridge was denied parole again earlier this week.

Joseph Wohlers, left, and Kahner Leary, right, listen as testimony is given to the Montana Pardons and Parole Board on Tuesday morning in Deer Lodge. The two young men were shot by Sebastian Olivares-Coster, who is serving three life sentences for the attempted murder of Wohlers and Leary and the murder of Cory Andrewski. Andrewski’s mother and stepfather are behind Wohlers and Leary.

to Sebastian Olivares-Coster, who was convicted of the murder of Andrewski.