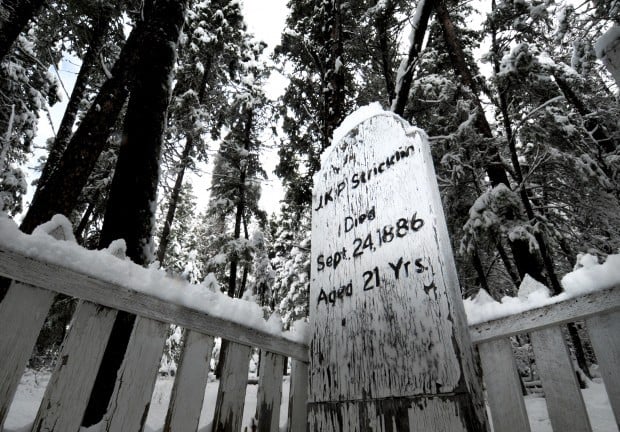 The life of a miner or anyone living in a mining camp in Montana in the late 1800s and early 1900s was difficult on a good day. The fact that many died young, like J.K.P. Stricklin who is buried in the Reynolds City Cemetery, seems natural to those of us living in the air-conditioned new millennium. 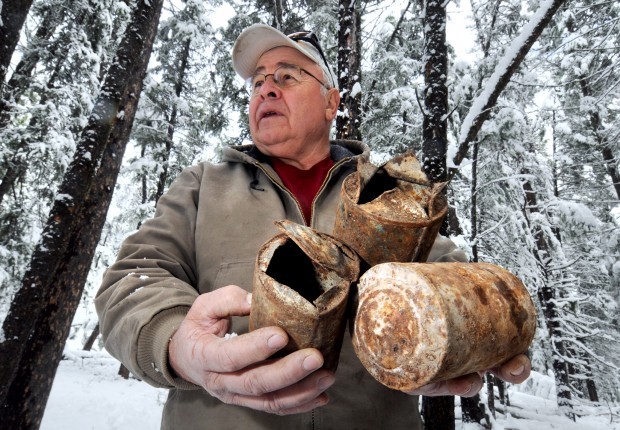 Dick Komberec has been mining in the Garnet Range for years. He theorizes that many miners died young due to lead in their food from eating out of tin cans that were sealed with lead. “They didn’t go to restaurants. They didn’t put it in a pan or anything. They’d eat it right out of the can,” says Komberec. 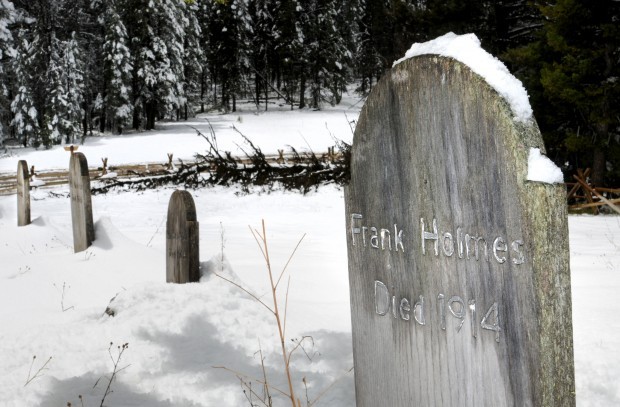 Deep in these impossible mountains, somebody laid Stricklin to rest on a September day in 1886.

Stricklin was 21 years old, according to the lone grave marker in the Reynolds City Cemetery here on the north slope of the Garnet Range. Nothing else is known about him or her. It makes the quiet in the headwaters of Elk Creek all the more deafening.

An anonymous grave nearby is similarly hemmed by a whitewashed picket fence. They’re among two rows of white wooden crosses that seem to denote the sites of 10 graves from a time when Montana was young and mining was king.

“We don’t really know a lot about them,” said Maria Craig of the Bureau of Land Management’s Missoula field office. “The (Youth Conservation Corps) came in and kind of fixed them up in the ’70s, and there’s just not a whole lot known about those things, not a lot written about them.”

Reynolds City’s is the older and more obscure of two small but fascinating graveyards on byways through the Garnets.

The other, Sand Park Cemetery, sits high on the ridge to the west, in a pretty little sloping meadow along the Garnet Range Road. Less than four miles northwest of the preserved and celebrated ghost town of Garnet, Sand Park primarily served Coloma – one of the region’s latest and most enduring mining camps.

A BLM roadside marker on the road below pointed out the poignant anonymity of the men, and posed to travelers the puzzle: Who was Frank Hamilton?

It’s a good question, since no Frank Hamilton is apparently buried there. Frank Holmes, however, was recently brought back to life, in a literary sense, by a couple from Moscow, Idaho.

Don and Melinda Blanchard Crawford described their remarkable search for Holmes’ identity in the winter 2010 issue of “Montana: The Magazine of Western History.” Through federal census records and online genealogical research tools, microfilmed newspapers and local history books, library collections and a visit to the Granite County courthouse in Philipsburg, the Crawfords emerged with a reasonably rounded picture of the man they called simply “Frank.”

Turned out Holmes led a reasonably nondescript life as a quartz miner and saloonkeeper. A 20-year-old immigrant from Sweden in 1880, he lived in Garnet when both the 1900 and 1910 censuses were taken. Holmes never married and was probably rooming in the Iverson Hotel when fire leveled it and most of the rest of downtown Garnet on Oct. 1, 1912.

The Crawfords discovered Holmes died “very suddenly” of heart failure at age 54 on March 11, 1915 – not in 1914 as his grave marker suggests. Most of his assets were related to his saloon business, including a dozen quarts of Budweiser beer, 32 gallons of whiskey, several hundred cigars, various taxidermied animal heads and an Edison Graphophone with 40 records.

The Crawfords summed up their research by writing a full obituary for Holmes, 95 years after the first one appeared in the Drummond Granite County News.

Marta Amelia Timmons, an adjunct professor of archaeology at the University of Montana, has spent eight years studying Coloma as field director of a BLM archaeological project.

Her team’s research included non-destructive subsurface testing of the Sand Park cemetery, where a sixth grave was detected. It’s presumably that of a woman – Mrs. Shipler, wife of Pete Shipler – who was identified in earlier surveys of the site.

What Timmons found interesting was a reference by an old-timer on the Granite County Montana Cemeteries and Funeral Homes website to the presence of some 20 graves years ago.

“We did quite a bit of testing up there and located a subsurface pit next to the cemetery that had been refilled,” Timmons said.

Miners didn’t refill their holes in the old days, she said. They just went on to the next one. And they usually made sure to locate their cemeteries in places that weren’t going to be mined.

“You can read horror stories of where they’ve had to move graves when they discovered there was gold-bearing gravel under them,” said Timmons.

What the archaeologists conjectured and then confirmed was that, in the years before World War II, the Work Projects Administration road that we drive on today was built through the middle of unmarked graves at Sand Park.

“They cut through that cemetery with a bulldozer and tore up all those graves,” Timmons said. “They didn’t know how many graves there were, just a lot of skeletal material and coffins, and so they dug a hole and reburied them all in that spot.”

Seven miles below Sand Park, there’s nothing left of Reynolds City. The highest gold camp on Elk Creek in the Blackfoot River drainage, it was soon superseded by Yreka a few miles down the creek.

A party from Last Chance Gulch led by Jack Reynolds struck gold here in 1865. Most researchers say it was the first of so many in the gulches of the Garnets. And like so many, Reynolds City was all but deserted within a few years, though mining continued as recently as the early 1980s.

What was J.K.P. Stricklin doing at Reynolds City in 1886? What killed him or her at the tender age of 21?

There were many ways to die in this harsh environment, most of them of a violent nature.

“Jack Varley was hung by the citizens of Deep Gulch,” the Deer Lodge Weekly Independent reported succinctly in August 1868.

In her 1962 book “Shallow Diggin’s,” Jean Walton Davis included a story written by Coleman H. Mulcahy of Deer Lodge in 1928. It told of a dispute in Reynolds City by Glen Lindsay and J.B. Taylor over a woman identified only as Letty.

Letty came to town with Taylor in 1865, but he left her destitute a few weeks later.

“Stung by grief and shame (Letty) sank deep into the shadows of a miners’ brothel, where men forgot they had sisters,” Mulcahy wrote.

Lindsay fell for her and rescued her from that life. Taylor came back to town, chided Letty in a noisy dancehall grown suddenly quiet, then shot and killed Lindsay when he stepped in. Taylor was caught and hung in Deep Gulch, Letty became a seamstress and Lindsay became an early – perhaps the first – tenant of the Reynolds City Cemetery.

“Just outside of Reynolds City and to the left of the road there stands a brown worm-eaten board which marks the grave of Glen Lindsay who, with unimpeachable chivalry, truly loved, bravely lost …” Mulcahy concluded.

Dick Komberec thinks there was a more common way to die in Reynolds City. He shuffled through the underbrush of the camp’s old dump last week to find an illustration. He came up with rusty cans made mostly of tin.

These had to date back to that era, said Komberec, a retired commercial airline pilot who’s been running mining operations and panning out history in these mountains for more than 40 years.

The cans had soldered seams on top and down the sides, and holes the size of a silver dollar in the bottoms, some of them with plugs still intact.

What were those solders and plugs made of? Lead. Deadly lead, Komberec said.

Time was gold for the miner, especially the one scrambling for dust on a mountainside claim just 10 feet by 10 feet in size.

“They didn’t go to a restaurant. They didn’t put it in a pan or anything,” he said. “They’d eat it right out of the can.”

Tomatoes, beans, oysters, whatever. Often frozen, and thawed over a fire. All the canned food freighted in by mule or wagon was acidic, Komberec said.

“It was going to get contaminated with whatever we know is in lead. We know today the lengths they go to to make things lead-free, taking it out of the gasoline and out of the paint,” he argued.

If the lead – hot or cold – didn’t get a miner, the mercury could have.

“Those guys had to get every little ounce of gold they could get, and they used mercury to recover it in many cases,” he said.

One ghastly practice was to hollow out a potato and place the amalgam of mercury and gold inside.

“They’d wrap it and throw it in the fire to burn the mercury off and leave just the gold,” Komberc said. “Then they’d eat the potato.”

“My theory is that sometimes we consume ourselves with what we’re doing, and gold mining in particular. People do all kinds of stupid things for gold mining.”

The life of a miner or anyone living in a mining camp in Montana in the late 1800s and early 1900s was difficult on a good day. The fact that many died young, like J.K.P. Stricklin who is buried in the Reynolds City Cemetery, seems natural to those of us living in the air-conditioned new millennium.

Dick Komberec has been mining in the Garnet Range for years. He theorizes that many miners died young due to lead in their food from eating out of tin cans that were sealed with lead. “They didn’t go to restaurants. They didn’t put it in a pan or anything. They’d eat it right out of the can,” says Komberec.