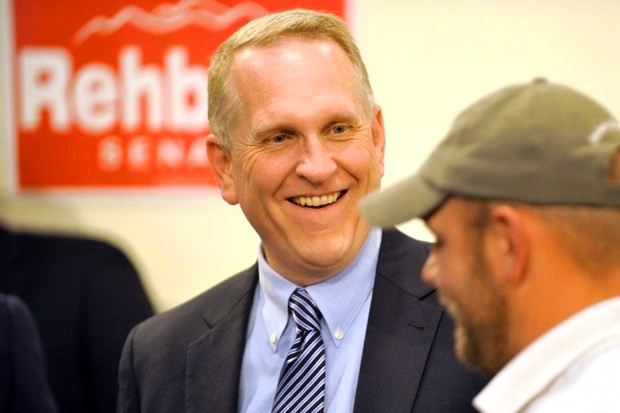 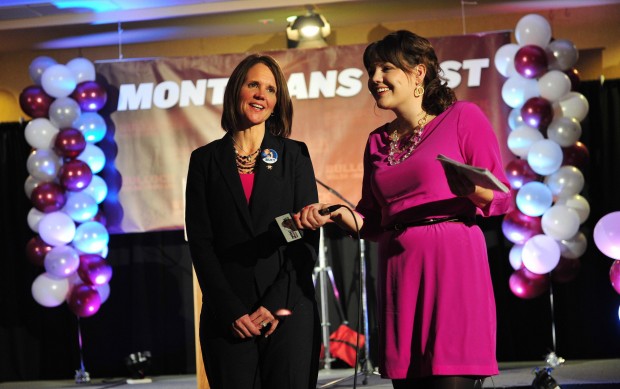 Pam Bucy, candidate for attorney general, prepares for an interview with an NBC affiliate at the start of the Democratic party at the Great Northern Hotel in Helena.

Republican Tim Fox said Wednesday that he will fight what he called the over-reach of federal government as Montana's next attorney general after winning the post by a six-point margin over Democrat Pam Bucy.

Fox, a Helena private-practice attorney, garnered 53 percent to Bucy's 47 percent with most votes tallied. Slow returns delayed a decision in the race until early Wednesday.

"I'm thankful for the hard work everybody put in," Fox told The Associated Press. "While I didn't get all the vote, I hope the people of Montana who voted for me will find me worthy of the respect and trust they put in me — and those that didn't vote for me, that I can earn their trust."

It was Fox's second run at the office. He lost in 2008 to Steve Bullock, who vacated the seat to run for governor.

Fox focused much of his campaign around a promise to challenge federal policies, including the Obama administration's signature health care law. Although the prospects of rolling back or substantially modifying the law dimmed with Obama's re-election, Fox said there is still room to influence its implementation at the state level.

He pledged Wednesday to defend the state's campaign finance laws, an issue that boiled over during the election season with a dispute over whether Republicans took excessive donations in violation of state law.

During the campaign, Fox returned a $32,000 contribution to the state Republican Party after Bucy filed a lawsuit challenging it as illegal under state campaign rules. Fox took the money when those rules were effectively suspended by a federal judge during a six-day window in October. He also returned $12,000 from individual donors.

Bucy came up short in her efforts to convince voters that she was the best candidate because of her experience as a prosecutor and past work in the attorney general's office.

She congratulated Fox in a Wednesday telephone call, according to her campaign. Bucy also issued a written statement urging politicians from both parties to address unresolved campaign finance and disclosure issues. She said Montana elections should be "decided by the people and not by special interests."

The attorney general's post is one of five offices elected statewide that run the Montana Land Board.

Republicans made it a priority this election cycle to wrest control of the board from Democrats, but Fox's seat might be the only one they gain: Democratic incumbents rolled to victory for state auditor and secretary of state. The two remaining seats seat on the Land Board, superintendent of public instruction and governor, remained undecided as votes continued to be counted.

Monica Lindeen took the auditor's race with 56 percent over Derek Skees with 44 percent with most results in.

Lindeen, a Huntley Democrat, gains a second term in which she has said she would seek authority to review health insurance company rate increases. Skees, a Republican state legislator from Whitefish, had promised to use the post to fight federal health reforms.

McCulloch, of Missoula, had said she would build on her first-term efforts to cut wasteful spending, improve efficiency and update Montana's election night reporting system. Johnson, of Bozeman, had promised to seek voter identification rules to prevent fraud if elected, but he was criticized by his opponent as ineffective when he held the post prior to 2008.

The superintendent of public instruction race remained too close to call, with first-term incumbent Denise Juneau holding a lead of less than one point with only a small percentage of votes outstanding.

Juneau, a Democrat and the first American Indian woman elected to a statewide position in Montana, was seeking re-election after spending a first term seeking to prevent dropouts and increase graduation rates. Welch is a consultant from Martin City who argued during the campaign that the state is over-regulating local schools.

McKinnon, a district judge in Choteau for the past five years, stressed the importance of judicial restraint and protecting constitutional rights during the campaign. Sheehy, a public defender from Missoula, said justices should stick to the law and not legislate from the bench. The winner replaces Justice James Nelson, who is retiring after nearly 20 years on the bench.

Airbus A340 plane lands in Antarctica for the first time

Airbus A340 plane lands in Antarctica for the first time

Get Montana and Wyoming election results

Pam Bucy, candidate for attorney general, prepares for an interview with an NBC affiliate at the start of the Democratic party at the Great Northern Hotel in Helena.