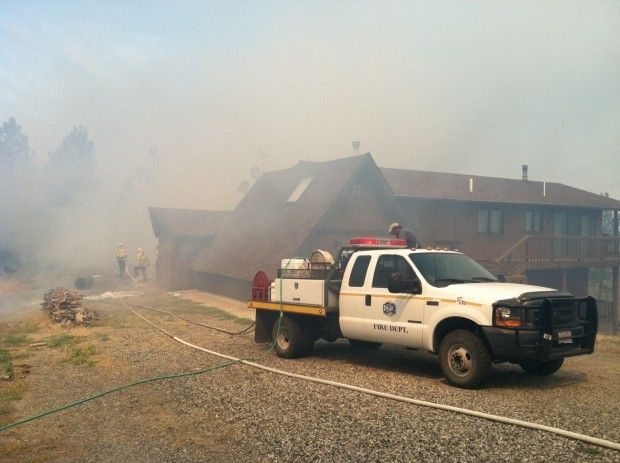 A Department of Natural Resources and Conservation truck sits outside a residence on Pleasant Hollow Trail as firefighters work on a blaze north of Shepherd in August. 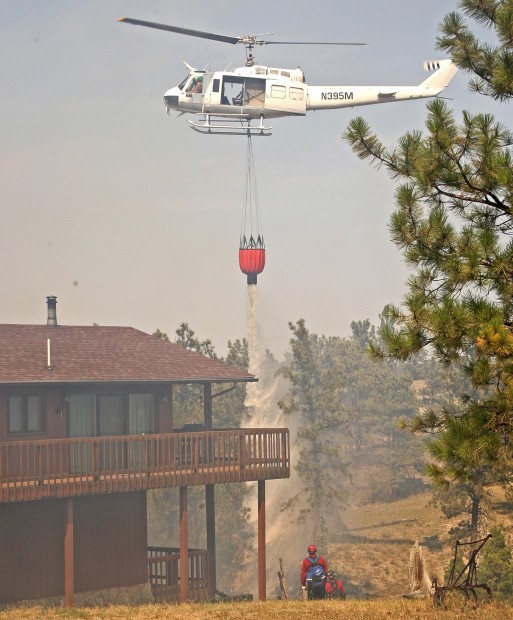 A helicopter makes a water drop on the Pleasant Hollow Trail fire behind Jim Morasse’s home north of Shepherd in August.

Making rural homes more resistant to fire is the best way to reduce the number of homes lost to wildland fires, according to a recent paper published by Missoula researchers.

That statement may suggest a “duh, right,” but in the past much of the pressure to reduce the intensity and occurrence of wildland fires has been on federal and state land managers to remove fuels from public lands through logging.

“We have the ability to change the character of the fires that come out of the wildlands,” said David Calkin, of the Forest Service’s Rocky Mountain Research Station in Missoula, the principal author of the research. “But if we’re concerned about homes burning up, then we need to think about the home ignition zone.”

The home ignition zone is the home itself and the area immediately around it. If a homeowner’s land is left untreated to prevent fire ignition, even low-intensity fires from far away have produced firebrands carried by the wind for miles that have burned houses, Calkin’s research showed.

Many people move to rural areas to enjoy the scenery, the close proximity to forests and grasslands. Yet it’s the closeness to these values that often increases a home’s chance of burning in a wildland fire.

Many insurance companies have taken note and won’t renew or write new policies unless fire dangers are addressed by homeowners.

Programs such as Firewise promote reducing the fuels, such as trees and brush, around rural homes to lessen the chance they will catch fire. The program also advocates such measures as having firewood stacked away from the home and cleaning rain gutters of pine needles – places that embers can land and smolder into flames.

“Hopefully, those kinds of measures will help us be more effective more quickly and the loss would be less,” said Bob Harrington, forester for the Montana Department of Natural Resources and Conservation, who oversees the state’s firefighting force. “But we’re not fireproofing communities, we’re simply trying to improve our chances of catching it when it’s small.”

For the most part, counties do not require homes in rural areas to meet any kind of fire-resistant or fire-tolerant building codes. In 2007, the Montana Legislature considered a bill that would require such measures, but it was weakened to only make recommendations. Such codes in the rural West sometimes are seen as an infringement on property rights.

As Harrington noted, though, “Encouraging voluntary compliance is not getting us to the place we want to be.”

“Clearly there is a strong need for zoning,” Calkin said, but he noted it’s not the only answer.

Calkin’s research examined the 2010 Fourmile Canyon fire in Colorado as an example of how even hazardous fuels reduction on surrounding public land failed to prevent a disastrous fire. The Fourmile fire, which started on private land, burned 168 homes in addition to more than 6,700 acres, yet a survey showed about 96 percent of the homeowners had taken some measures against wildfire.

The paper noted that because extreme fire behavior – which is common along the Colorado Front Range – wasn’t considered when fuels reduction was conducted, the work didn’t mitigate for fires like the Fourmile Canyon blaze.

The researchers agreed that the goal of keeping wildfire out of the wildland urban interface is “unobtainable.” They also said that fuel reductions “do not stop fires (just change behavior).” Instead, Calkin and his co-authors advocated fuels reduction blended with prescribed burns, but those are difficult if not dangerous to conduct around rural homes. But without the burns, fuels reduction work won’t have the desired effect, they argue.

According to a study by Headwaters Economics, a Bozeman nonprofit, 84 percent of the West’s wildland urban interface remains undeveloped, yet 120 million people live in communities vulnerable to wildand fires. In Montana, Flathead County has the greatest WUI development at 27 percent. In Wyoming, Lincoln County leads with 22 percent.

“We’re definitely seeing a lot more development in the WUI area,” said Marna Daley, public affairs officer for the Gallatin National Forest in Bozeman. “Along the Gallatin Face, there are a lot more subdivisions and homes being built.”

This increase in rural building has come as federal wildland fire suppression costs have ballooned to an average of more than $3 billion a year – nearly half of the Forest Service’s annual budget, according to Headwaters Economics. States pay an additional $1 billion to $2 billion annually, the group said.

As federal firefighting costs increase, money is often pulled from other projects to pay fire bills, and as a result work like trail maintenance may not get done.

“The Forest Service looks at non-allocated funds and pulls those back into the Washington office to pay for suppression costs,” Daley said.

Saving homes in the WUI goes beyond just fuels reduction and prevention, the research authors said.

“We need to do a better job of risk sharing,” Calkin said, and not try to solve the problem of fires in the wildland urban interface with just one method.

That will take greater cooperation between federal, state, county and local governments and fire departments, as well as landowners, he said. The groups need to clearly delineate who is responsible for what work.

The DNRC oversees the National Fire Plan in the state that also works to “reduce the effects of catastrophic fire,” including providing defensible-space audits for homeowners. Harrington said that all of Montana’s counties have identified their WUIs, but the boundaries are “eclectic” and don’t always match adjoining counties.

As the costs of fighting large wildland fires continue to increase, Calkin said, there will eventually be a push by taxpayers to require greater restrictions on homeowners in rural areas to fireproof their homes, as well as improvements in community preparedness for the inevitable extreme fires.

“There will always be problems, but there doesn’t have to be disasters,” Calkin said.

A Department of Natural Resources and Conservation truck sits outside a residence on Pleasant Hollow Trail as firefighters work on a blaze north of Shepherd in August.

A helicopter makes a water drop on the Pleasant Hollow Trail fire behind Jim Morasse’s home north of Shepherd in August.