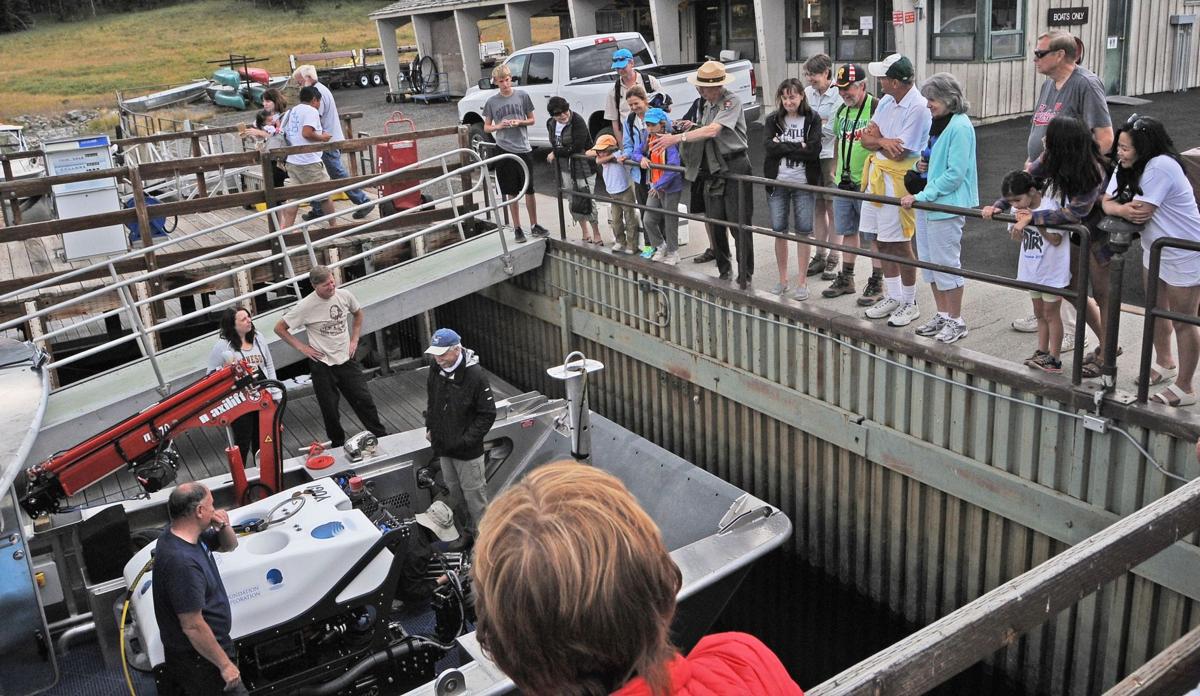 A crowd of tourists surrounds the Global Foundation for Ocean Exploration's new boat, which is carrying scientists and their equipment on to Yellowstone Lake for the first part of a three-year study of the lake's underwater hydrothermal system. 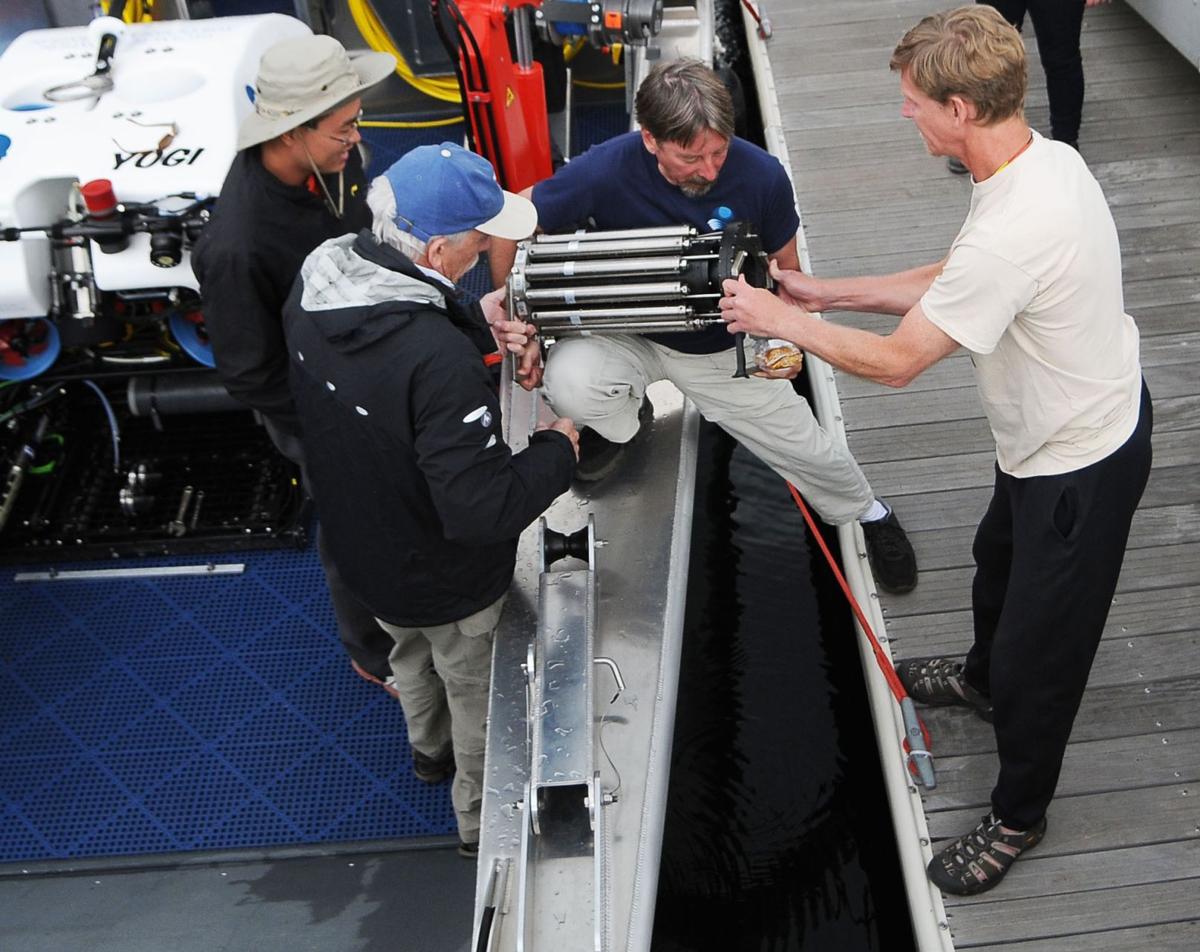 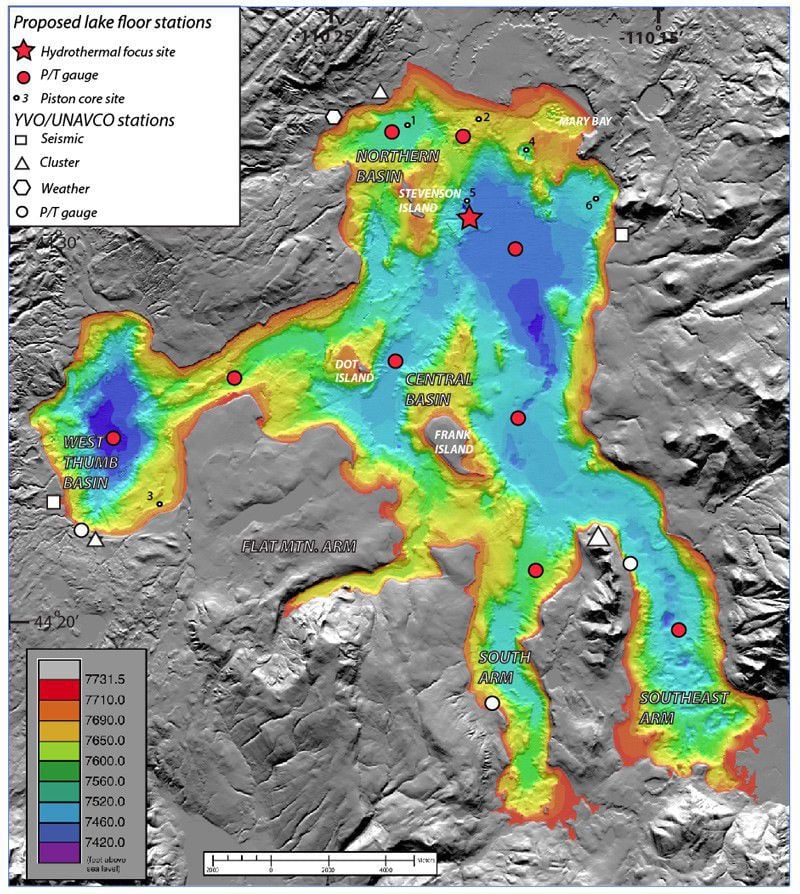 This U.S. Geological Survey map of Yellowstone Lake shows places where monitoring equipment will be deployed. 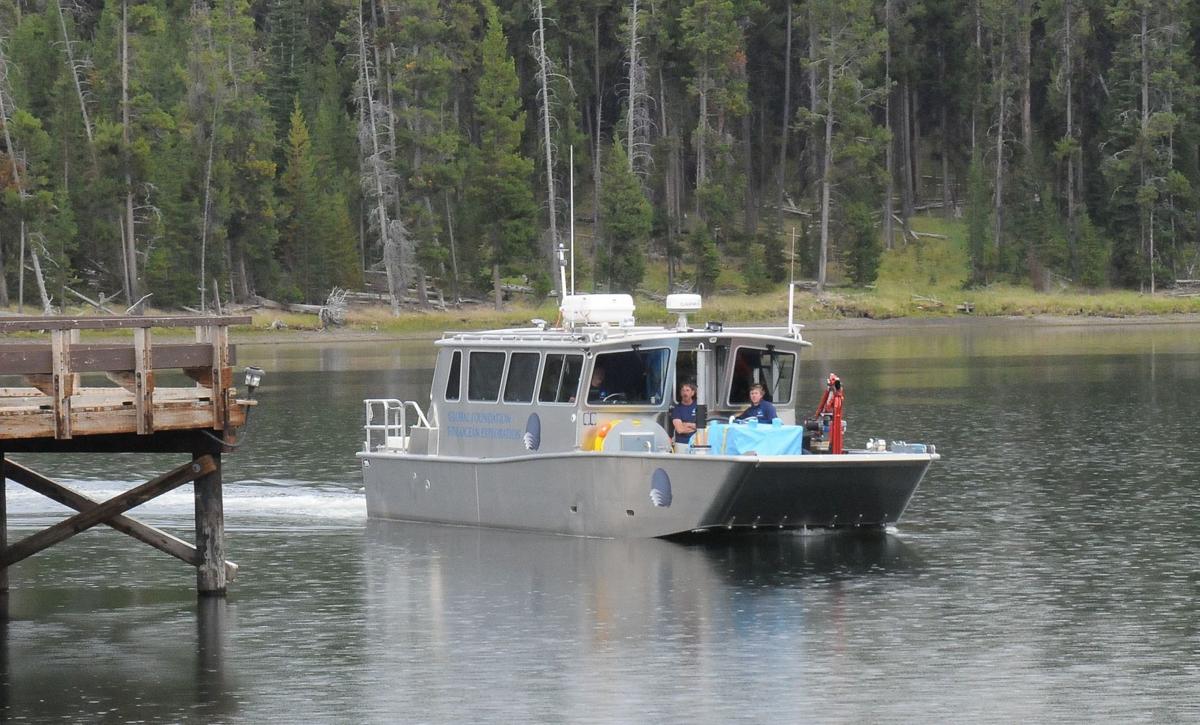 Compared to working miles out on the ocean in deep water, the crew of the boat gets to come in to dock every day. 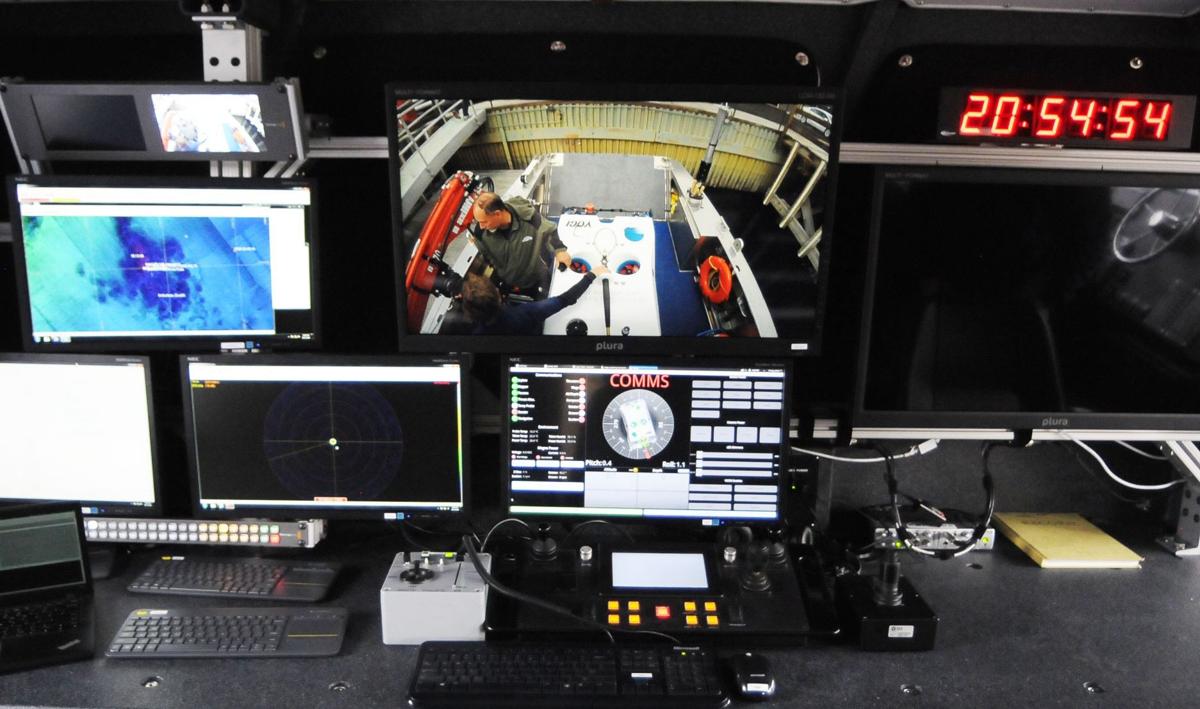 Inside the boat is this control panel and video displays from which remote vehicles are steered underwater. 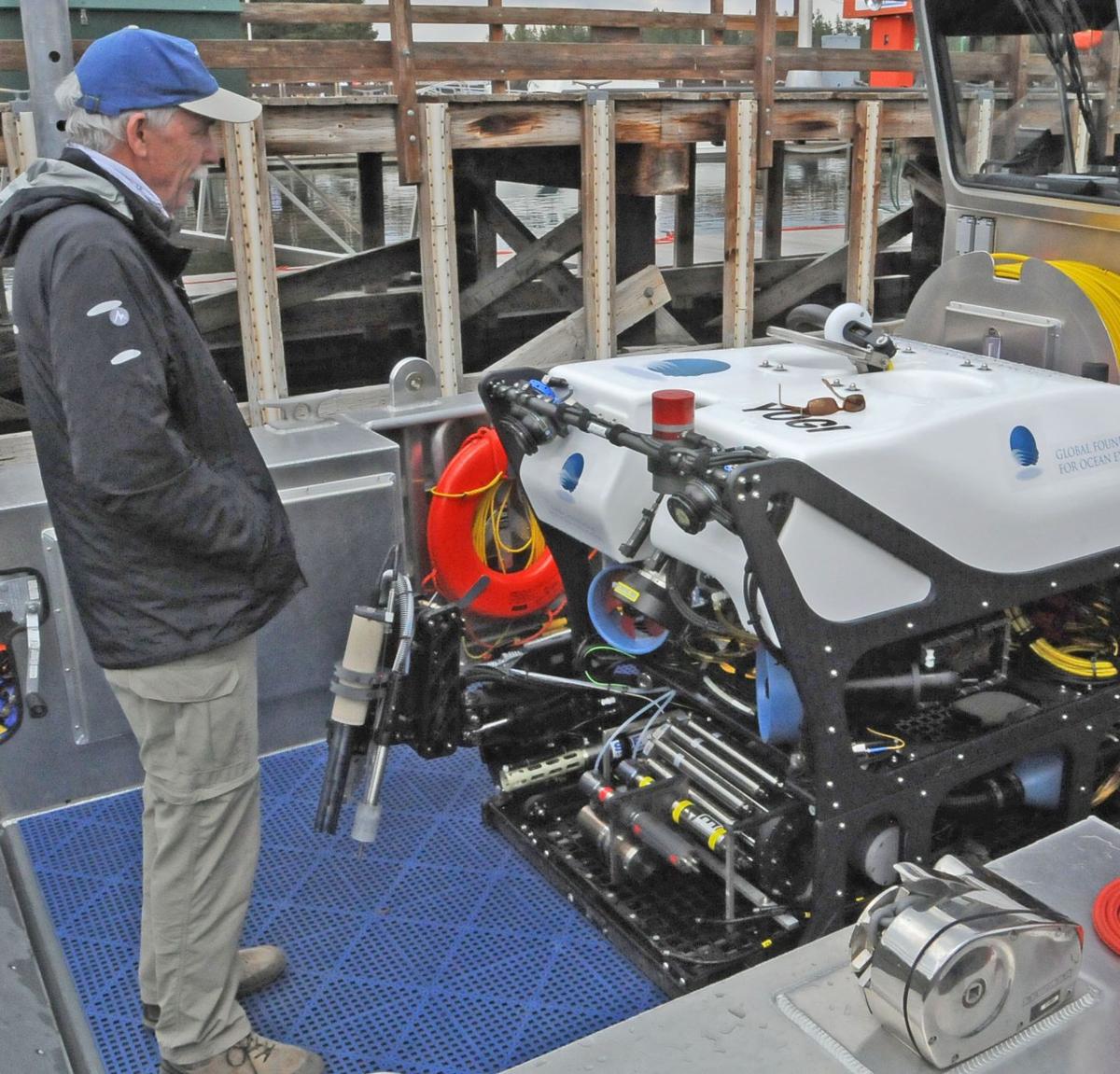 BRIDGE BAY MARINA — Yellowstone Lake has some troubled waters, which is partly why Rob Sohn is here.

There are waves sloshing across the lake possibly created by seismic activity or winds that displace millions of tons of water. Every year the lake freezes and then thaws. When snowfall declines, the lake shrinks. And there are small earthquakes that continually ripple through the largest freshwater lake above 7,000 feet in North America.

All of that activity coupled with the fact that the lake overlies more than 250 hot water vents and the largest known hydrothermal explosion craters in the world has sparked an intensive three-year scientific study that launched last month.

“The goal is to make models of hydrothermal circulation under the lake,” said Sohn, the scientist leading what’s been dubbed the Hydrothermal Dynamics of Yellowstone Lake, or HD-YLAKE project. “That will take four to five years.”

To better understand the system the HD-YLAKE project will deploy an array of scientific instruments worthy of a NASA exploration of deep space.

First, a torpedo-looking Autonomous Underwater Vehicle named REMUS mapped the floor of the lake to an unprecedented scale. In an earlier map of the lake bottom each pixel was 10 meters in size. With the new map each pixel is 50 centimeters.

The map helps the team more accurately place all of its monitoring and sampling devices. Among them are lead-weighted thermal blankets that will measure heat flow around the underwater vents. Those are low-tech devices compared to the meter-long temperature pressure gauges that will be inserted into the lake floor next to the vents to record changes every few seconds for a year.

For the first time seismometers will be placed on the lake floor to measure earthquake activity, even small ones created by the flow of hydrothermal fluid.

The mapping also helped the crew know where to take soil core samples near the vents in preparation for deeper piston coring in September that will provide more details about the hydrothermal system going back to the last ice age.

“That’s partly because we know exactly where to go because of the mapping.”

Each separate project has its own crew that takes turns on a newly built aluminum boat provided by the Global Foundation for Ocean Exploration, piloted by GFOE founder David Lovalvo. All told there are about 30 individuals who will cycle through Yellowstone National Park over the next three years to work on each project.

“Planning all of the people coming and going, I’m like a travel agent,” Sohn joked.

But there’s nowhere he’d rather be. In fact, the project was born out of a discussion he had with the scientist in charge of the Yellowstone Volcano Observatory, Jake Lowenstern, when they were both in the nation’s first national park. Sohn was studying Lone Star Geyser in 2008-09 when a “major earthquake swarm” swept through the lake.

“The immediate question was: How did that affect the lake vents?” Sohn said. “No one had been there since 2005.”

So Lowenstern suggested Sohn put a seismometer on the lake floor to measure the activity.

Sohn’s initial proposal for a grant was turned down, even though the National Science Foundation panel liked the idea. The scientists on the panel suggested he expand the analysis to include other experiments. That required forming a team and another proposal that was finally funded by the National Science Foundation to the tune of $3 million. In addition, the U.S. Geological Survey is partnering with the team to provide technology, expertise and personnel, several universities are contributing and Sohn’s Woods Hole Oceanographic Institution is integral to the work. All told Sohn figures the Yellowstone Lake work is a $5 million project.

“As a scientist when you get something like this funded, you’re not going to get an opportunity like this again, so you want to do as much as you can,” he said.

So even though the hours are long, the location is remote and the juggling of is personnel difficult, Sohn is enjoying his working summer in Yellowstone National Park.

Harlan Kredit, a seasonal Yellowstone interpretive ranger and member of the Global Foundation for Ocean Exploration’s board, couldn’t resist bringing a group of tourists over to the shiny silver science boat after it docked at Bridge Bay last Wednesday.

“Everyone asks about it,” he said. “I love to get people excited about research in the park. Anything we can do to let people know what’s going on is a good thing.”

The technology Kredit pointed to, like the robot named Yogi specifically built for the project through a Kickstarter fund, was shiny and new. Dave Wright, GFOE electrical engineer, piloted the craft into Yellowstone Lake to take water samples that were captured in airtight chambers for testing.

He compared driving the craft to flying a blimp, since both float. Wright was enjoying the relative ease of working on Yellowstone Lake with the dock nearby and the depths relatively shallow since he’s used to working on the ocean days from shore and at depths that require hours of equipment descent and retrieval time.

Whenever Yellowstone is mentioned these days, talk on the internet and blogs always quickly turns to the next eruption of the supervolcano underlying the park. Sohn said visitors have questioned whether the work he and his teammates are doing could set off an aquatic explosion, but he assures them that the scientists are just monitoring what’s happening on the lake floor.

There have been at least 20 big hydrothermal explosions that made craters larger than 300 feet in diameter since glaciers retreated in Yellowstone about 14,000 to 16,000 years ago. Previous studies have suggested that such eruptions may occur as often as every 200 years.

“In terms of risks to the park, these are more likely to happen than the volcanic stuff,” Sohn said.

“We’re trying to understand what are the physical and chemical processes that lead to these underwater explosions,” he said. “We will likely fall short of seeing the thing we want to understand, but the information may be able to predict what makes an explosion happen.”

Science! Yellowstone park is a great place for research

Yellowstone visitation up only slightly in July

BOZEMAN, Mont. — Wildlife managers are considering changes to the hunting and slaughter of bison that leave Yellowstone National Park after pa…

Yellowstone's bison breeding season a window to past

First I saw them as small tan blurs, their lanky bodies barely visible behind clumps of bright green bunch grass. I nicknamed them the four am…

The amount of heat flowing out of hydrothermal vents in the floor of Yellowstone Lake appears to be much higher than previously thought.

As winter approaches, take heart in the fact that it won’t last 80 years.

Although Yellowstone Lake may seem relatively calm, the floor of the lake is littered with hydrothermal explosion craters. Studies are beginning to reveal the details of these explosions, like the one that formed Elliott’s Crater about 8,000 years ago.

A crowd of tourists surrounds the Global Foundation for Ocean Exploration's new boat, which is carrying scientists and their equipment on to Yellowstone Lake for the first part of a three-year study of the lake's underwater hydrothermal system.

This U.S. Geological Survey map of Yellowstone Lake shows places where monitoring equipment will be deployed.

Compared to working miles out on the ocean in deep water, the crew of the boat gets to come in to dock every day.

Inside the boat is this control panel and video displays from which remote vehicles are steered underwater.