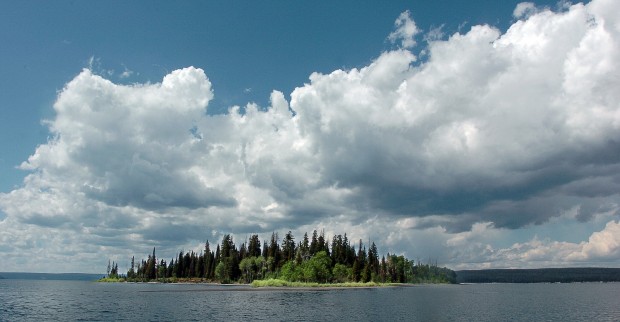 Recently published research has shown that large, slow waves on Yellowstone Lake are being detected by seismic sensors because the huge volume of water slightly deforms the earth's crust. 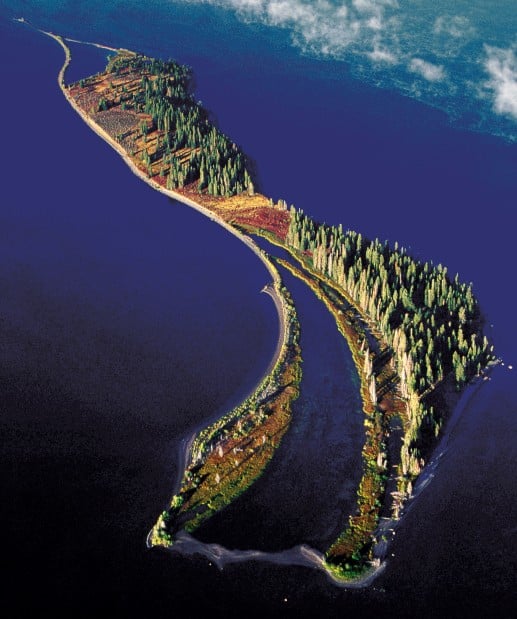 The deepest point in Yellowstone Lake — 390 feet — is just off of Stevenson Island. 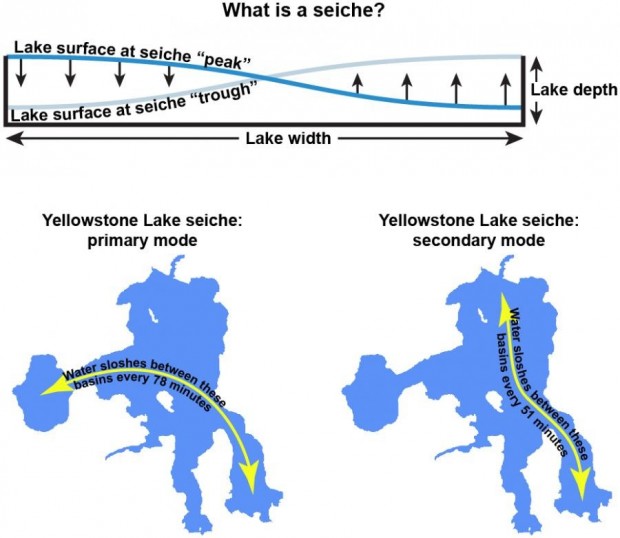 The installation of powerful seismic sensors in Yellowstone National Park over the past four years to track the area’s sleeping volcano has incidentally provided insight into rhythmic wave events on Yellowstone Lake.

“It’s pretty exciting,” said Karen Luttrell, a U.S. Geological Survey research geophysicist based in Menlo Park, Calif., who co-authored a paper on the seiche waves (pronounced "SAYSH"). “It’s a little surprising we detected it at all.”

In Yellowstone, the sensitive sensors as far as 19 miles away from the lake were picking up the wave pattern. The seismic sensors were detecting the lake waves because the waves were displacing so much water within the lake that the water's weight was deforming the thinner earth crust over the volcano’s caldera, propagating the wave through the earth’s molten layer, located about 2 to 4 miles below, to the delicate sensors miles away.

“So the crust kind of bends to get out of the way,” Luttrell said.

The deformation is very small, only one to two nanostrains, or parts per billion — equal to about one or two microns over a distance of two kilometers. There are 25,400 microns in one inch. And the moon and sun daily cause strains of about 50 nanostrains because of their gravitational pull.

“So this is a really small deformation,” Luttrell said.

The waves on the lake are equally small, rising only about an inch or two over the course of an hour and a half. But it may take a few days for the waves to dissipate.

“You wouldn’t notice this if you were out fishing in a boat,” she said.

“So even if it’s not very high, it’s a pretty big mass,” Luttrell said.

By employing her calculator, Luttrell estimated that a 10-centimeter Yellowstone Lake seiche weighs about 5 million tons.

No one is quite sure what causes the seiches at Yellowstone. But they are a well-known phenomenon around the world. Seiches on the Great Lakes have proven deadly. One in 1954 created a 10-foot wave on Lake Michigan that swept away eight fishermen on a Chicago pier. Seiches up to 16 feet have been measured on Lake Erie. They only occur on confined or partially confined bodies of water.

The seiches on the Great Lakes are typically caused by air pressure changes and strong downbursts of wind, according to the Illinois State Geological Survey. The height of the wave varies by the strength of the wind or the magnitude of shift in air pressure.

But seismic events can also trigger seiches. There’s evidence that prehistoric seiches caused by seismic events triggered 33-foot-high waves at Lake Tahoe on the California-Nevada border. Following the 1959 earthquake, a seiche wave sloshed 2 to 4 feet of water over the top of Hebgen Lake Dam.

The odd thing is that the sensors are picking up seiches on Yellowstone Lake even when it’s iced over. The bottom of Yellowstone Lake is known to be an otherworldly place. Much like other areas in the park’s ancient caldera, there are steam vents, craters and evidence of lava flows on the lake’s bottom.

Yellowstone Lake covers about 132 square miles and sits at an elevation of more than 7,700 feet. It is roughly 20 miles long and 14 miles wide with 141 miles of shoreline. At the lake’s deepest point, just east of Stevenson Island, the bottom of the lake is 390 feet below the surface.

In 2009 researchers first picked up the seiche waves on Yellowstone Lake. By installing a tide gauge and other instruments in 2011, scientists were able to prove their theory that the fluctuations they were seeing at their seismic instruments were coming from waves on the lake.

“It’s a natural phenomenon and most likely has been going on as long as the lake has been there,” Luttrell said. “We just never had instruments sensitive enough to detect it before.”

Scan this code or visit insideyellowstone.com to download the free Yellowstone app

Recently published research has shown that large, slow waves on Yellowstone Lake are being detected by seismic sensors because the huge volume of water slightly deforms the earth's crust.

The deepest point in Yellowstone Lake — 390 feet — is just off of Stevenson Island.