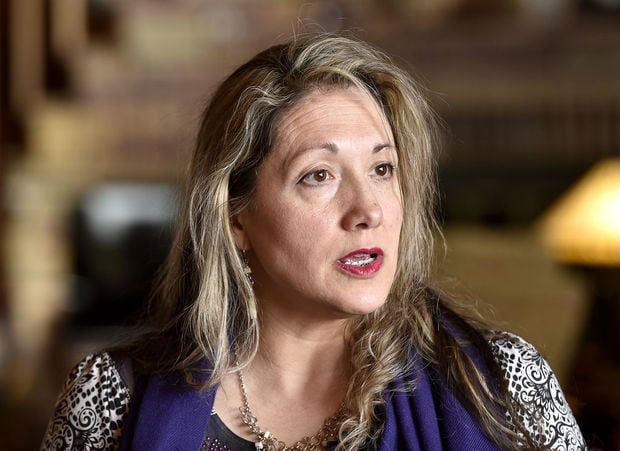 Stephanie Anderson was 13 years old when a man in his late 20s who'd been given guardianship over her by her parents began to use her for prostitution. Now 44, Anderson's pain is still fresh when she recounts what led her into the life and how she got out. 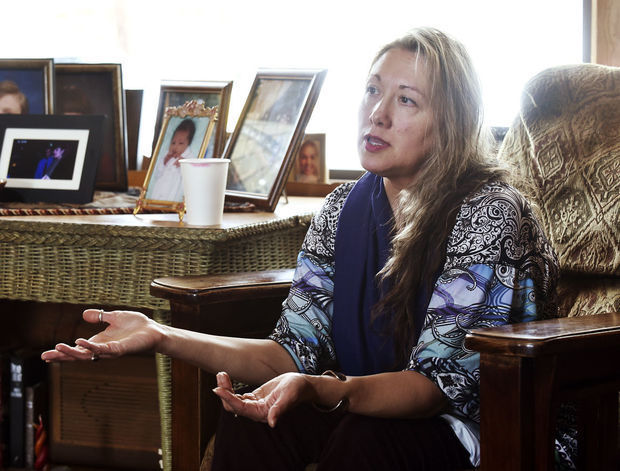 Stephanie Anderson says it took her years to reconcile herself with the sexual abuse and sex trafficking she was involved in as a child.

Stephanie Anderson was 13 years old when a man in his late 20s who'd been given guardianship over her by her parents began to use her for prostitution. Now 44, Anderson's pain is still fresh when she recounts what led her into the life and how she got out.

Stephanie Anderson says it took her years to reconcile herself with the sexual abuse and sex trafficking she was involved in as a child.

His name was Matt. He was tall, tan, well-dressed, well-spoken and in her 13-year-old mind, a gentleman.

It’s been decades since Stephanie Anderson was that 13-year-old girl, fiercely independent and working as a hostess in the Chinese restaurant Matt frequented in Midvale, Utah.

Now a 44-year-old woman with deep brown eyes and tinges of silver in her long, blonde hair, she barely recognizes that young girl wrapped in layers of anger, pain and angst.

But Matt immediately picked up on the signs the vulnerable teenager unknowingly displayed.

“He started asking the right questions,” she explained.

It wasn't hard to win over Anderson. She already felt betrayed by her family. As a young girl, she had been sexually abused by two perpetrators, who in harming her took away her sense of security with her own family.

She was 13 and prematurely eager to strike out on her own.

“I can make sure things are better for you,” he told her, reiterating the message to her parents weeks later, when he asked them to give him guardianship of the girl.

Looking back now, she doesn’t seem surprised by her parents’ willingness to agree to the plan and allow her to live with this man who purported to be 22, but was actually pushing 30.

Her parents had no idea Matt was a pimp and had zeroed in on their oldest daughter, her seemingly tough exterior hiding a fragile and wounded little girl within. Matt knew that Anderson was more profitable than drugs. He understood that young girls like Anderson were reusable, and therefore infinitely profitable.

Matt was a predator.

Her parents signed the guardianship letter as Anderson carried her few belongings to his car.

"I was completely deceived," she said.

It was obvious when she started moving her belongings into Matt's home that she wasn't going to be sleeping in a separate bedroom. Matt moved her into his own room and said she would be safe sleeping in his bed, making her compromise one baby step at a time.

"All of a sudden, it was awareness that this is reality," she said. "This is not going to be what we thought."

Then Matt started sharing Anderson with his friends, she said.

He also isolated her, not allowing her access to a phone and watching her like a hawk. She wasn't allowed to ask questions or to "pry into his business." His business was his business, Anderson said.

Within the first month, Matt started making money off her. Anderson remembers the first encounter vividly – her pain is still visible as she talks.

"It's the wealthy people you are afraid of," she explained. "That first couple wasn't a couple with tattoos, she had long hair and was very pretty."

They also had a newborn baby, she recalled.

As Matt waited outside, she went into the couple's home and started chit-chatting with them. They told her to place a pill underneath her tongue and then they proceeded to rape her.

"They make you feel safe," she said. "They want to be touched, and they will tell you what they want."

When she went back home with Matt, she started vomiting.

"They have to get you past the things you wouldn't do," she explained. "So when I left, I was like, just take me home."

Over the course of the six months she lived with Matt, he transported her to seven or eight different places around Utah and Nevada and pimped her out to couples or men, she said.

There were other girls that he worked and there were pictures that he took of the girls in an attempt to match them with a couple or a man in the different towns and cities where they stopped.

There were times when she would walk out of a room and see another young girl walk out of another room. They never acknowledged each other or their activities.

"You have been exposed to things that you don't want to talk about and you don't want anyone else to know what you have done," she recalled. "You go home and they give you drinks ... and give you a big party to reinforce that this life is so much better. You are independent and you are on your own."

After six months with Matt, it dawned on Anderson that she hadn't gained any of the independence she was seeking from her parents in her new life with Matt. In fact, it was just the opposite. She had less independence and was living with a man who didn't care about her at all.

"There was something inside of me that realized I am in big trouble. I'm in trouble," she said. "He was always watching."

"I started to panic," she said. "I ran away from that situation."

Anderson and her friends, Rick and Patty Freeland, who run a safe house for sex-trafficking victims in Montana, have a term for the situation she was in at age 13.

They call it "the life" and after she ran away from Matt, she never went back to it.

It's actually unusual that Anderson never went back to "the life." According to the Freelands, it's common for girls in the trade to return after leaving it or running away.

All the other factors about Anderson's experience are horrifyingly normal, when it comes to trafficking.

According to the Polaris Project, 100,000 children are trafficked in the United States every year.

The average age of a juvenile who is trafficked in the United States is 14. Sex traffickers, like Matt, frequently target vulnerable teens with a history of abuse. Then predators use false promises, threats and drugs, among an array of other tools, to manipulate them to cooperate.

Even though Anderson left the sex industry, she still used drugs and alcohol to cope with the emotional trauma she had endured in her short life. There was a tremendous amount of pain to mask.

"After coming out of that, we didn't know how to act normal," she said. "The hardest part was that we were 15 years old and hurting ourselves to cover the trauma and pain that had happened to each of us. We did a lot of drugs and alcohol."

For the next three years, Anderson was a homeless teenager, living with friends in shoddy places with other girls who had been through similar experiences.

"Even though you don't want to go back to the life, it was always there," she explained. "I did meet a gentleman who said, 'You look like you are 40 years old. How long has it been since you called your mom?' I was so shocked to even be listening to someone who said that."

The words struck a chord and resonated somewhere deep within her, until one day when she was 17, Anderson woke up in the back room of a gas station and agreed with the man.

She called her mother and was on a bus back home to Utah within hours.

It took years for Anderson to get clean and years for her to reconcile herself with what happened to her as a child – including the sexual abuse and the sex work she performed.

Anderson is a woman of faith and believes her relationship with God has sustained her though the emotional trauma.

That's when the nightmares stopped, she said.

With the help of a trauma counselor, she began writing letters to all the people who she had hurt along the way.

"You have to forgive," she said. "A big part of that is saying these people have hurt me."

She's now married and has a son and serves as a mentor to other women who stay at the safe house in Montana and testifies before legislative bodies about the horrors of trafficking.

"For every girl that I have met, every one has a different story," she said. "There isn't a common story line."

How to spot human trafficking victims

What to watch for:

MISSOULA — It's low risk, high yield. Unlike cocaine, the commodity is reusable.

The pimp whipped Kailyn with a pistol.

“Milan” says she is 19 years old, and that may be true. She has beautiful black hair, tan skin and a full figure peppered with tattoos – all o…

Man accused of trafficking in Bakken wants to fire lawyer

FARGO, N.D. — A man who was featured in a documentary on the North Dakota oil patch and now faces sex trafficking and drug charges wants to fi…

MISSOULA — Missoula police are continuing their search for a 13-year-old girl who has been missing since April.

Charge added against man accused of trafficking in oil patch

BISMARCK, N.D. — Federal prosecutors have added an additional count against a man who was featured in a documentary in the North Dakota oil pa…