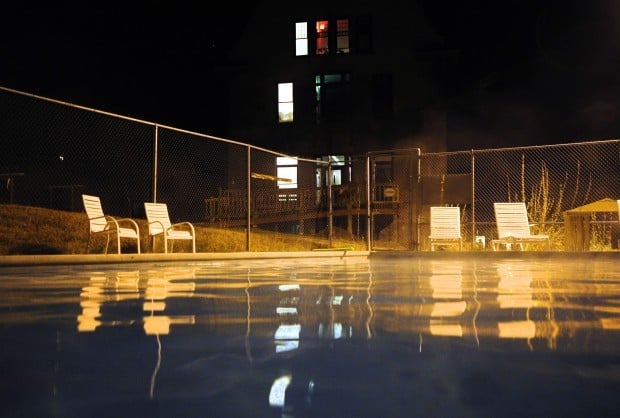 Steam rises from the warm pool outside the hotel portion of the Boulder Hot Springs. Simone was said to be seen in the third floor window. 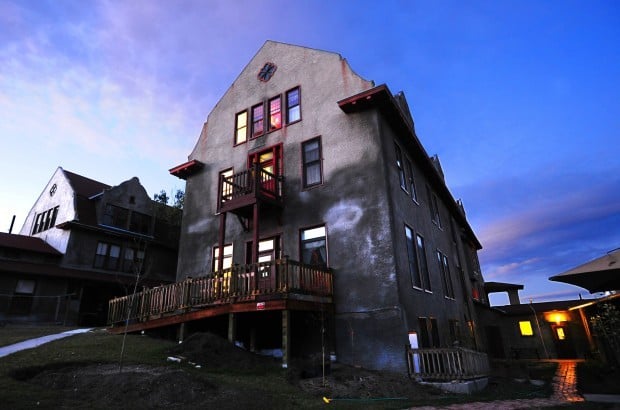 The sun sets at the Boulder Hot Springs, giving way to night — when some say spirits walk the halls of the historic hotel.

HELENA -- Whether Boulder Hot Springs is haunted or not doesn't make a visit there any less intriguing.

Its architecture is obviously historic, it's other-worldly potential easy to imagine. Between Helena and Butte, the colorful destination offers soothing waters and a warm bed all year long.

But there is something about the Halloween season that can stir up unusual "energy."

Boulder Hot Springs has welcomed visitors for 130 years with naturally heated mineral waters, meals and overnight stays. But some go in hopes of seeing a ghostly spirit.

It's said that a prostitute was murdered in the old office area - stabbed by a mining executive from Butte - and that she haunts the halls. Although few have seen this so-called "lady of the night," she's become quite well known.

The Simone Suite is located on the first floor. It has two beds, four tall windows and a big boudoir bathroom. The walls are a simple white but the artwork, bed covers and throw pillows are bright with rich floral colors. The room overlooks the courtyard, the surrounding hills and has a decent view of the old, original part of the hotel.

Some guests who've stayed at the bed-and-breakfast nestled in the foothills of the Beaverhead Deerlodge National Forest say they have encountered an unexplained strong order of perfume, heard footsteps in an empty hallway and even seen a woman in a white gown looking out the windows.

The buildings appear a bit foreboding, but for most, the hot springs provide an oasis of calm and security.

Ellen Baumler, a local historian, says she's never been able to verify the legend of Simone but has heard many stories of spirits.

Barb Reiter, one of the current managers, lived in the hotel in the early 1990s and had paranormal experiences during her stay.

Reiter says she was once a nonbeliever in ghosts until she started feeling colder temperatures and a strong energy. The first time was near the old office, the place were Simone is said to have been murdered. Another time came when she slept in the building's west wing.

"I had this experience of energy that passed over me," she said.

Upon hearing an Independent Record reporter discuss ghostly possibilities with a front-desk clerk, former Montana resident Angie Blenco couldn't help but chime into the conversation about spirits and murdered prostitutes.

Blenco has been visiting the establishment for decades and said she always sensed a strong energy, but never had a specific experience.

While she'd never heard Simone's story before, the fact that the old hotel is said to be haunted came as no surprise, she said.

Patrick Marsolek of Helena took a field trip in 2005 with a group to explore the resort's energy.

"There were so many different kinds of feelings, from a man telling us to go or the loneliness of a small girl, to a community gathering in the dining room, to ladies of the night activity," he wrote in his summary of the experience.

Baumler went along as the historian.

She remembers some men in the group said they really felt like there was some kind of prostitution activity, but she's never been able to document it.

"They men said they were feeling tugged," she said. "Several others said they heard children running up and down the halls. They didn't know this, but the St. Joseph's Orphanage was destroyed (in the 1935 Helena earthquake) and those children stayed there. They thought it was odd, but it really wasn't odd at all."

American Indian legend portrays the hot springs grounds as "Peace Valley," reflecting a belief that the land and the waters were for everyone to share and could not be owned.

The recorded history at Boulder Hot Springs begins in 1860, when prospector James Riley filed a land and water rights claim, and four years later built a crude bathhouse and tavern, according to documents at the Montana Historical Society.

In 1882, new owners built a hotel, and in 1891, it was remodeled and enlarged in the Queen Anne style. The east wing was built some time between 1910 and 1913 and the west wing was remodeled in a California Mission style, including Tiffany glass lighting, beamed ceilings and hand-stenciled walls.

In 1940, C. L. "Pappy" Smith purchased the hotel and named it the Diamond S Ranchotel and Hot Springs. He brought in horses and his own brand to the hotel.

Twenty years later, it was purchased by Albert Lane, who operated a cattle ranch on the land. It's during this time that call girls were said to reside on the fourth floor and some say prominent residents from the surrounding area used a fire escape to visit.

Today, Boulder Hot Springs is owned by Anne Wilson Schaef and a group of partners. She is one of the few people reported to have actually seen Simone.

In the book, "More Haunted Montana," by Karen Stevens, Schaef says she saw Simone standing at the end of the hallway smiling with a mischievous, caring twinkle in her eyes. The book also says that a male guest reported seeing a woman wearing a white gown who seemed to be watching him from a third-floor window as he swam in the pool.

It's hard to deny that the hot springs has a colorful past. But whether that color is based on haunted history or pure imagination is hard todetermine.

"There is definitely energy there, " Baumler says. "But whether you could ever really pinpoint who or what it is, I don't know."

Steam rises from the warm pool outside the hotel portion of the Boulder Hot Springs. Simone was said to be seen in the third floor window.

The sun sets at the Boulder Hot Springs, giving way to night — when some say spirits walk the halls of the historic hotel.