Fisherman drift down the Madison River by Red Mountain

Campground in 2009. Fish, Wildlife and Parks is collecting public

comment on the possibility of greater regulation of the popular 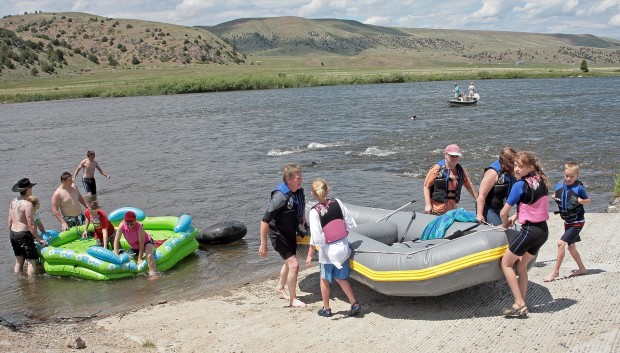 Floaters pull out at Blacks Ford fishing access site on the Madison River in 2009. Greater regulation of recreation on the Madison is a possibility as the state begins collecting comments on management of the popular stream. 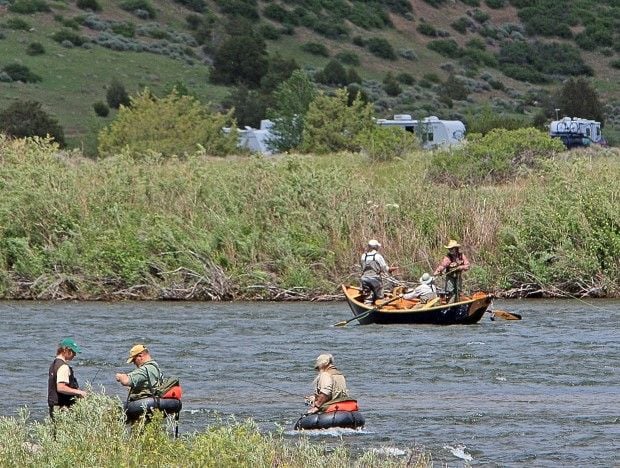 Fisherman drift down the Madison River by Red Mountain Campground in 2009.

The Madison River — the most heavily fished stream in Montana — probably will be administered differently as Fish, Wildlife and Parks begins work to develop a recreation management plan.

"It's an effort to be proactive," said Charlie Sperry, a recreation management specialist for FWP.

The Madison is formed at the junction of the Firehole and Gibbon rivers in Yellowstone National Park. From there, it fills Hebgen and Ennis reservoirs before continuing on to near Three Forks, where it joins the Jefferson and Gallatin rivers to create the Missouri.

The Madison caters to a variety of users. It has long been prized as a trout fishery, especially by fly anglers, on the upper end. Below Ennis Dam, the Beartrap Canyon section of the stream is known for its whitewater rafting. Just downstream, flotillas of inner-tubers are a common sight on hot summer days.

The goal of a management plan is to help preserve the quality of recreational experiences and protect natural resources, FWP said in a statement. That has become more challenging as use of the river has climbed.

In its most recent angler survey, between March 2009 and February 2010, the agency counted more than 218,000 angler days of pressure, more than half of those coming from nonresidents. An angler day is one angler fishing for all or part of one day.

To help craft a document, FWP will hold four public meetings beginning in February, as well as take online comments and applications for a citizens' advisory committee. Sperry said the process is intentionally designed to allow lots of public participation without a preset guideline.

"It's a pretty organic process by design," he said, allowing the public to determine how to manage the river.

FWP has already gathered some background information from three surveys of resident anglers and landowners and an onsite survey of those using the river. Resident anglers complained of crowding on the stream, landowners commented on litter and trespassing, while the onsite survey, completed in 2009, showed river users generally pleased with the experience, although there was less satisfaction with the more-crowded section above Ennis.

"Despite some differences in finding between the surveys, a strong majority of respondents from all three surveys reported the overall quality of the recreational experience on the river as being acceptable or very acceptable," the 2009 survey said.

At least five of Montana's rivers already have some type of management. The Madison and Blackfoot require commercial users, competitive events and organized groups to purchase a special recreation permit, but the number of permits isn't limited. The Big Hole and Beaverhead rivers have regulations that ban nonresident anglers and float-fishing outfitters from certain river sections on some days. The Smith River allows floats only with permits, which are allotted through an annual drawing.

Sperry said development of a management plan for the Madison River will probably take about a year and a half.

"The bulk of this year will go to public participation," he said. "The goal is to finish it sometime in 2013."

Fish, Wildlife and Parks is seeking input on how the public views recreational use of the Madison River. The information gathered will be used in the preparation of a draft management plan, which will then be circulated for public comment.

The first round of public meetings are scheduled at the following sites:

Those unable to attend one of the scheduled meetings may complete an online survey at fwp.mt.gov/recreation/management/madison/default.html or comment by sending an email to mrrp@mt.gov. Comments will be accepted throughout the planning process.

FWP is also seeking applicants to serve on a citizen advisory committee that will be asked to develop recommendations for managing recreation on the Madison River. The committee application form and information about the planning process are available on the FWP website at fwp.mt.gov/recreation/management/madison/default.html. Applications are due by March 16.

For additional information on the Madison River Recreational Plan, log on to: fwp.mt.gov/recreation/management/madison/default.html. Questions may also be directed to Cheryl Morris, river recreation manager, at 406-994-6359.

Fisherman drift down the Madison River by Red Mountain

Campground in 2009. Fish, Wildlife and Parks is collecting public

comment on the possibility of greater regulation of the popular

Floaters pull out at Blacks Ford fishing access site on the Madison River in 2009. Greater regulation of recreation on the Madison is a possibility as the state begins collecting comments on management of the popular stream.

Fisherman drift down the Madison River by Red Mountain Campground in 2009.