BOZEMAN — It takes a good dose of myth, a well-built legend and an unusual nickname to keep a man like John Johnston alive in people’s memories 115 years after his death.

“The stories about him, he keeps getting taller and heavier,” said Nathan Bender, who has researched the history of a Hawken rifle and Bowie knife owned by Johnson, also known as Johnston and Liver-Eating Johnson. They are all the same man.

Even in real life he was a large man, more than 6 feet tall and weighing around 230 pounds, according to some accounts. The Sioux Indians named him Black Bear because of his barrel chest, according to one story.

The rifle and knife were donated in 2000 to the Cody Firearms Museum in Cody, Wyoming. While head of special collections and archives at the University of Idaho Library, Bender examined the articles and wrote a paper published in “Arms & Armour” in 2006. He recently presented the paper to a gathering of the Montana Historical Gunmaker’s Guild in Bozeman, members of which waded in with a few comments.

What’s in a name?

Johnston became famous more recently from the 1972 movie “Jeremiah Johnson,” starring Robert Redford, which was loosely based on Johnston’s life. Yet in his own time the frontiersman was more commonly known as John Johnston, reportedly a fake last name he took after striking an officer and deserting the Navy. He was actually born John Garrison in Little York, New Jersey, in 1824.

The movie portrays Johnston as a madman bent on revenge after Indians kill his native wife. His liver-eating name came from tales of him supposedly dining on his victim’s innards as a further means of revenge. The more likely scenarios for him receiving his nickname are quite different, although just as gruesome. One story has the incident taking place along the Musselshell River, near its junction with the Missouri River, where Johnston and several companions had a run-in with a band of Sioux warriors.

The men were working as woodhawks, workers who cut wood to sell to steamboats traveling up and down the Missouri, when they were reportedly attacked by the Sioux. Outgunned, few of the Indians escaped, and those wounded were tracked down, scalped and then killed. In an attempt to send a grisly message, the white men boiled the dead warrior’s skulls and displayed them on sticks along the river as a warning to others, according to the book “Red Lodge, Saga of a Western Area.”

The book quotes Johnston as saying one Indian’s liver inadvertently stuck to his knife after he killed the warrior and he jokingly made believe he was eating the organ.

“I was all over blood and I had the liver on my knife, but I didn’t eat none of it,” the book quotes Johnston as saying. “The liver coming out was unintentional on my part.”

But one of his companions said he had dined on the man’s liver and for the rest of his life Johnston was wedded to the name. Another account attributes a similar live incident after Johnston killed two Sioux warriors who were following him and a greenhorn as they hunted along the Musselshell River north of Billings.

Johnston’s real life put him at the center of one of the West’s most enduring stories. He acted as an Army scout in the late 1800s as Gen. Oliver Otis Howard pursued the Nez Perce Indians during their flight from an Oregon reservation. The Indians’ escape sent them traveling through the Big Hole Valley, Yellowstone National Park, past Billings and Laurel while on the way to the Bears Paw Mountains near Montana’s northern border.

Johnston spent his later years as a deputy sheriff in the town of Coulson, where a Billings park along the Yellowstone River now sits, and in Red Lodge.

Bender wrote that the knife and rifle in possession of the Cody Firearms Museum “fit easily with other known historic sources of information about ‘Liver-Eating’ Johnson in the 1860s-90s in Montana, Wyoming and Canada.”

The items reportedly came from William W. Alderson, who met Johnston when Alderson served as an Indian agent at the Milk River Agency in Fort Peck from 1873 to 1875. The two became friends, and Johnston reportedly gave the items to Alderson before he died.

Alderson was a founder of Bozeman, where a street still carries the family name. He also served as a state representative to Congress for Montana and published one of Bozeman’s first newspapers. The rifle and knife supposedly passed from Alderson to a gun collector, then back to a family member and then another collector before being donated to the museum.

Although one affidavit accompanied the donation, there was no documentation of the original sale to aid in Bender’s research. Consequently, he was left to speculate as to whether the origins of the gun and knife fit into the same timeframe as Johnston’s life.

“The Hawken was a pretty good hunting rifle up until the 1870s,” said Dan Phariss, a Livingston historic rifle maker. “They were supplanted by the rolling block and Sharps in the early 1870s."

Knowing that Johnston was an avid hunter and sharpshooter, it would make sense that he owned a Hawken, Phariss said.

“I’ve shot a lot of critters with them, ranging out to about 150 yards,” he added. “So they were a very viable hunting arm until” other guns came along to displace them.

“There are tales that Johnson had a lot of rifles,” he said. “He used to (pawn) them to the bartender to stand him for drinks.”

The Cody Firearms Museum is more certain of the Hawken’s provenance. “Well we know that this is the .56 caliber half-stock Hawken rifle that he carried during his time in the West,” wrote curator Ashley Hlebinsky in her blog. “He was photographed with the firearm as well.”

Such speculation about Johnston, his legendary life and even his personal possessions would likely please the man. His mythic stature continues to live on. But in reality his life did not end in a blaze of glory like an old Western movie.

After having served several terms as constable of the coal mining town of Red Lodge, in 1897 — at the age of 73 — he settled on 160 acres south of Red Lodge. Two years after receiving the patent for his land, Johnston left for the Old Soldier’s Home in what is now Los Angeles. He was there less than two months before dying.

In 1972, after learning of his burial in California, a class of Los Angeles middle school students lobbied the Veterans Administration to have Johnston’s remains dug up for reburial closer to his mountain home. The owner of Old Trail Town in Cody, Wyoming — Bob Edgar — agreed to take the remains. On June 8, 1974, Johnston was reburied as a crowd gathered, some dressed as if living in the mountain man era. Actor Robert Redford — who had portrayed Jeremiah Johnson — served as one of the pallbearers, drawing a large crowd to the event.

“The ceremony had something of a circus atmosphere,” wrote Gary Svee for the Billings Gazette at the time.

That Johnston was reburied in Cody instead of Red Lodge did not sit well with some. An attempt to get a restraining order to halt the move was denied by a federal judge, despite the intervention of then-Sen. John Melcher. Testimony in that case included a sworn affidavit by Red Lodge resident Fred Longmore. Longmore said as a child he held Johnston’s hand on the railroad platform before he departed for California.

“He looked at the Beartooth Mountains and tears rolled out of his eyes and I said, ‘Don’t feel sad, Mr. Johnston, because you’ll come back. They won’t keep you down there long.’ Johnston replied, ‘Oh, Freddy boy, I’ll never see them mountains again.’”

“He would have abhorred the reburial at a tourist stop near some warehouses in a Wyoming town,” wrote Harry J. Owens in his Red Lodge history book. “Nowhere can be seen his beloved Beartooths. Liver Eating Johnston would enjoy the last laugh, however, as all that was left of his earthly remains when the grave was opened was a large leg bone and a few fragments of the cedar coffin he had been buried in. And, although this tourist stop now claims his remains, they did not capture his spirit. The spirit of John Johnston still roams wild and free over his Beartooths and, in the final reckoning, that is what really counts.”

Lots of great stuff at the Buffalo Bill Center, but you should see what's in the basement

They have Ernest Hemingway’s shotgun, and William Cody’s Medal of Honor. And, there's a custom rifle built for Abraham Lincoln with the presid…

For many tourists, firing a Gatling gun or machine gun rounds out Yellowstone vacation

Steve Heinowski started the last morning of his family’s trip to Yellowstone cranking a Gatling gun capable of firing 10 rounds per second. Th…

CODY — Kenneth Zheng and his vacationing family dropped into the Cody Firearms Experience to shoot guns and hang out with John Wayne.

CODY, Wyo. — When Warren Newman got his first Winchester shotgun at the age of 12, the Texas boy was beside himself with joy. His days were fi…

LOVELL, Wyo. — On a tour of the Lovell-Kane Area Museum, museum president Karen Spragg points out a wood-and-glass display case.

Even Sheriff Walt Longmire would have had trouble with these ne’er-do-wells.

70-year-old wanted to 'wear a coonskin cap, hunt bears, be a real woodsman' — so he did

A hunter shot and killed a grizzly bear Saturday near Pendroy, according Montana Fish, Wildlife and Parks.

"Blood Brothers: The Story of the Strange Friendship between Sitting Bull and Buffalo Bill"

Commonly used firearms in the American West will be discussed by Danny Michael, assistant curator at the Cody Firearms Museum, at the April 23…

On Saturday morning, history buff Ralph Saunders described to an audience of 15 people how four members of Lewis and Clark’s Corps of Discover…

Gary Svee, longtime Gazette writer, remembered for his sense of social justice and his dedication to journalism.

The Laurel Police Department released photos Tuesday afternoon of a man they believe robbed a Taco Bell at gunpoint Thursday. 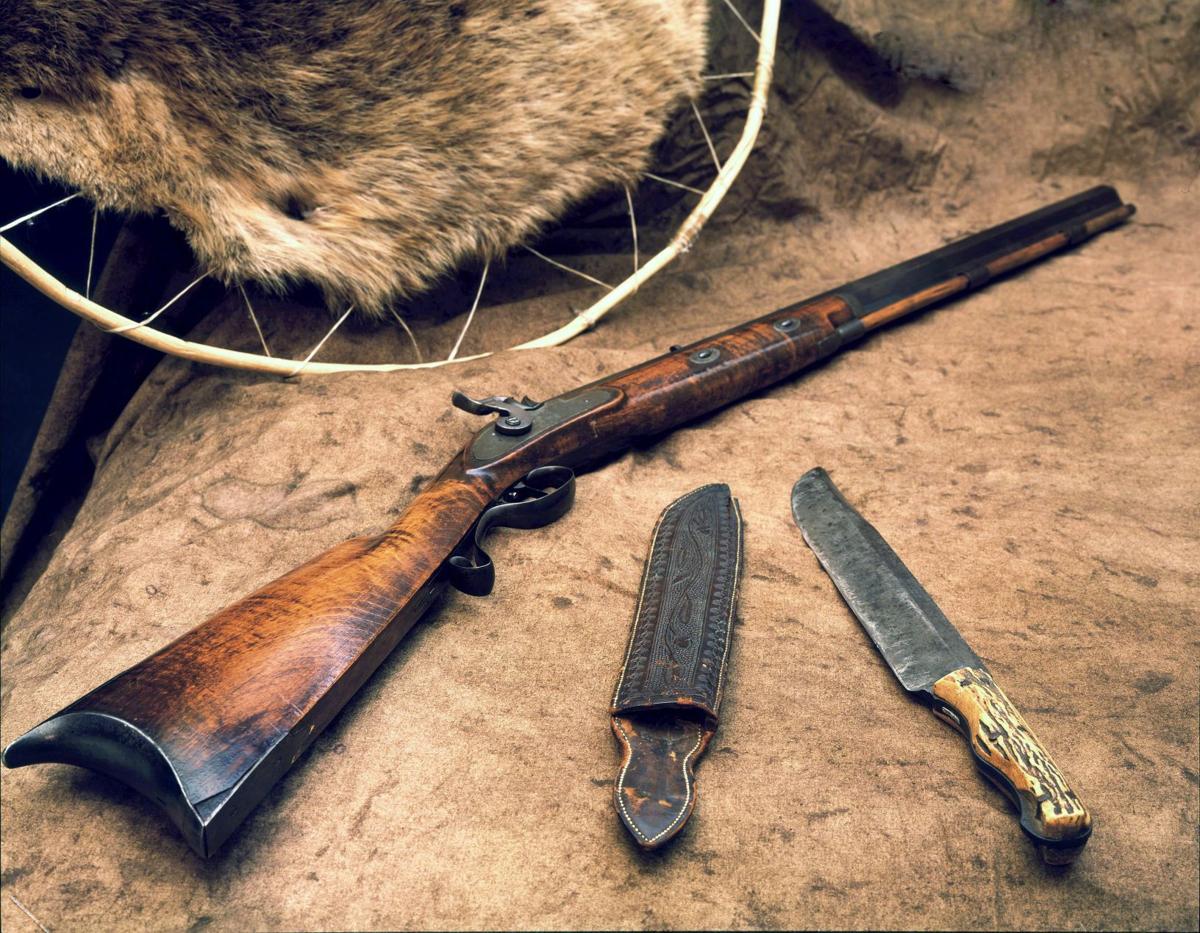 This Hawken rifle and heavy-bladed knife were once owned by John "Liver-Eating" Johnston. The items were donated to the Cody Firearms Museum in 2000, about 100 years after their owner had died in a Los Angeles old soldiers home. 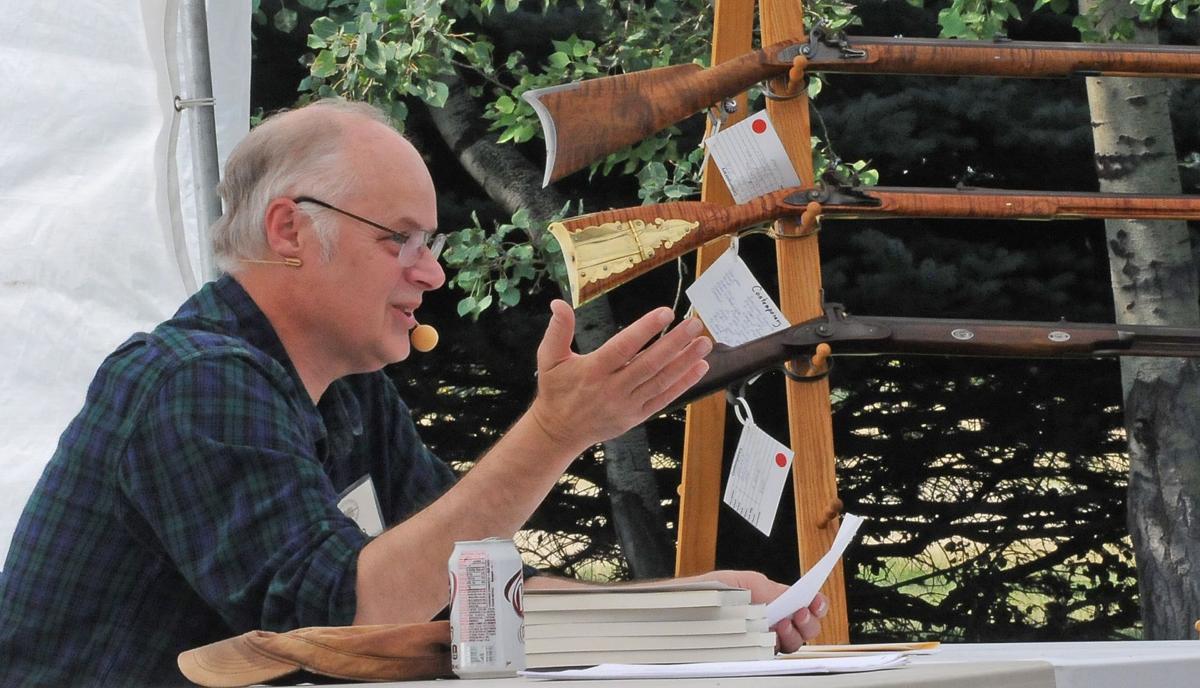 Nathan Bender, a research librarian, talks to the Montana Historic Gunmaker's Guild about John "Liver-Eating" Johnston during the guild's recent gathering in Bozeman. Bender examined a rifle and knife owned by Johnston and wrote about the pieces.

This is the .56 caliber Hawken Rifle owned by John "Liver-Eating" Johnston that was donated to the Cody Firearms Museum. 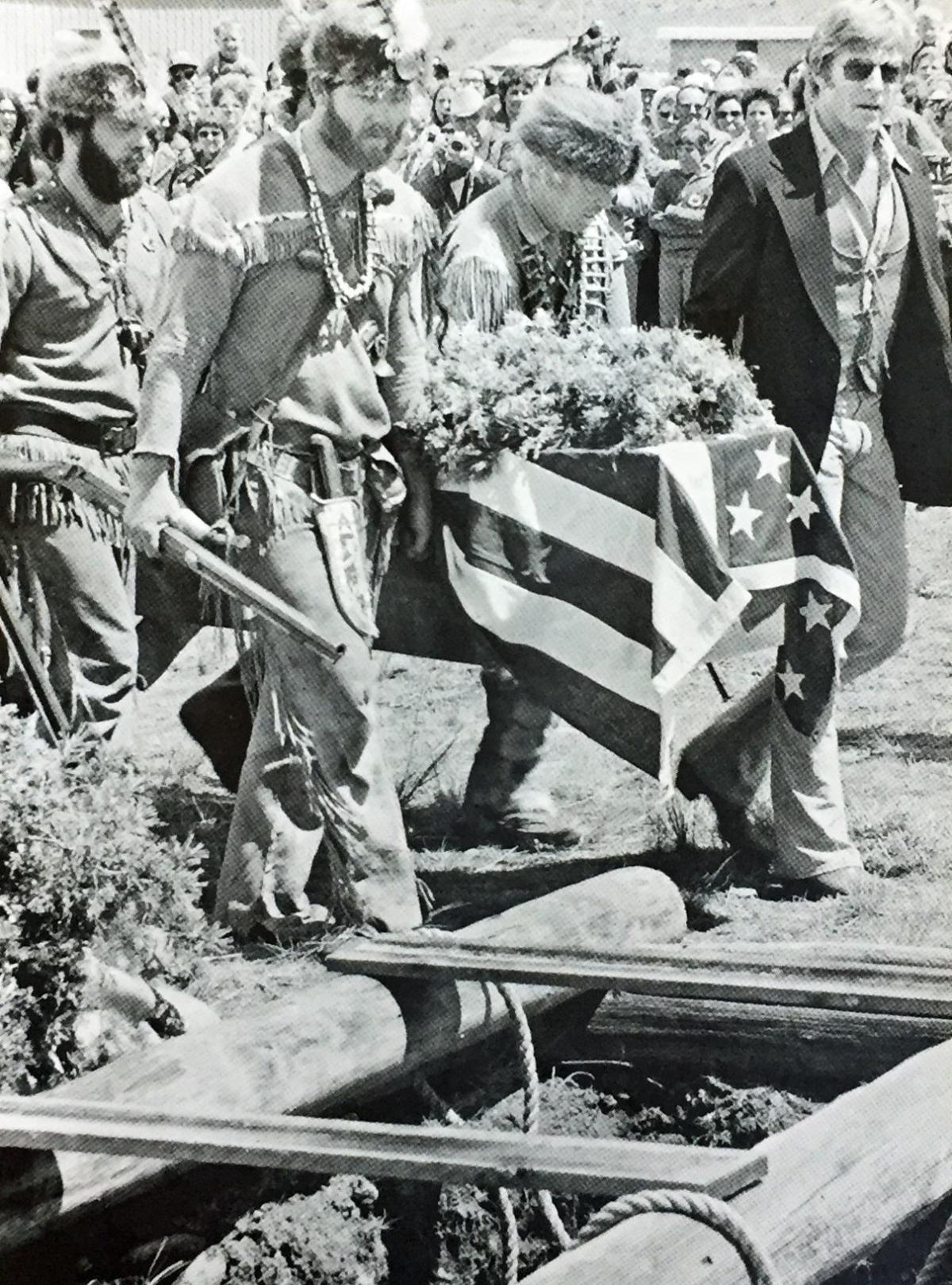 Then-Billings Gazette photographer Dave Shors photographed actor Robert Redford acting as one of the pallbearers for the reburial of John Johnston's remains in Cody, Wyoming's Old Trail Town in 1974. 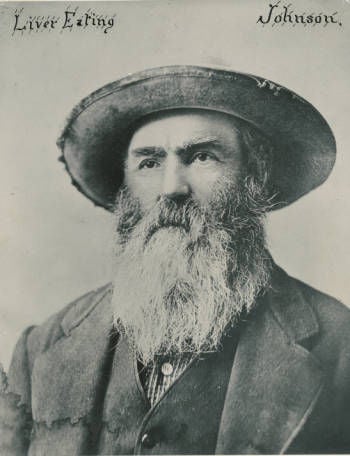 Liver-Eating Johnson was a Civil war veteran, government scout in the 1870s, buffalo hunter, and deputy sheriff of Red Lodge.