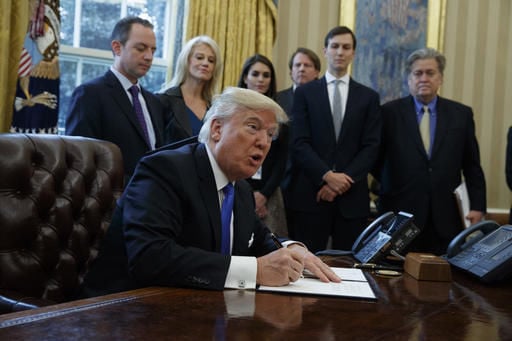 President Donald Trump signs an executive order on the Keystone XL pipeline Tuesday in the Oval Office of the White House in Washington. 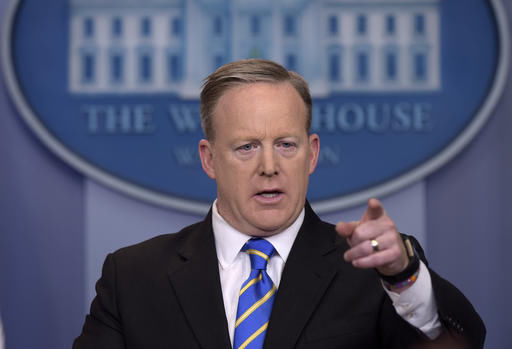 White House press secretary Sean Spicer calls on a reporter during the daily briefing at the White House in Washington on Tuesday. Spicer answered questions about the Dakota Pipeline, infrastructure, jobs and other topics.

WASHINGTON — The Trump administration has instituted a media blackout at the Environmental Protection Agency and barred staff from awarding any new contracts or grants, part of a broader communications clampdown within the executive branch.

The prohibitions came to light Tuesday as the agency moved to delay implementation of at least 30 environmental rules finalized in the closing months of President Barack Obama's term, a potential first step to seeking to kill the regulations.

A summary of the actions posted in the Federal Register includes a long list of regulations that include updated air pollution rulings for several states, renewable fuel standards and limits on the amount of formaldehyde that can leach from wood products. President Donald Trump signed a directive shortly after his inauguration on Friday ordering a "regulatory freeze pending review" for all federal agency rules that had been finalized that have not yet taken effect.

The Trump administration has also ordered what it called a temporary suspension of all new business activities at the department, including issuing task orders or work assignments to EPA contractors. The orders were expected to have a significant and immediate impact on EPA activities nationwide. EPA contracts with outside vendors for a wide array of services, from engineering and research science to janitorial supplies.

Similar orders barring external communications have been issued in recent days by the Trump administration at other federal agencies, including the departments of Transportation, Agriculture and Interior.

Staffers in EPA's public affairs office are instructed to forward all inquiries from reporters to the Office of Administration and Resources Management.

"Incoming media requests will be carefully screened," one directive said. "Only send out critical messages, as messages can be shared broadly and end up in the press."

A review of EPA websites and social media accounts, which typically include numerous new posts each day, showed no new activity since Friday.

White House spokesman Sean Spicer said Tuesday he had no information on the blackout.

"We're just trying to get a handle on everything and make sure what goes out reflects the priorities of the new administration," Ericksen said.

Beyond what was stated in the internal email, Ericksen clarified that the freeze on EPA contracts and grants won't apply to pollution cleanup efforts or infrastructure construction activities. The agency later said it would also seek to complete that review by Friday.

State agencies that rely on EPA for funding were left in the dark, with both Democratic and Republican officials saying they had received no information from EPA about the freeze.

"We are actively seeking additional information so we can understand the impact of this action on our ability to administer critical programs," said Alan Matheson, executive director of Utah Department of Environmental Quality.

"This decision could have damaging implications for communities across New York state and the country, from delaying testing for lead in schools to restricting efforts to keep drinking water clean to holding up much-needed funding to revitalize toxic brownfield sites," Schumer said.

The executive director for the advocacy group Public Employees for Environmental Responsibility, Jeff Ruch, said the orders go beyond what has occurred in prior presidential transitions.

"We're watching the dark cloud of Mordor extend over federal service," Ruch said Tuesday, referring to the evil kingdom in the epic fantasy "The Lord of the Rings."

Ruch noted that key posts at EPA have not yet been filled with Republican appointees, including Trump's nominee for EPA administrator, Scott Pruitt. That means there are not yet the new senior personnel in place to make key decisions.

Environmentalists said the orders were having a chilling effect on EPA staff, many of whom were suffering from low morale. Trump and Pruitt have both been frequent critics of the agency and have questioned the validity of climate science showing that the Earth is warming and man-made carbon emissions are to blame.

Liz Perera, climate policy director for the Sierra Club, said Trump's move to freeze all EPA communications and contracts should be "a major red flag for all Americans."

"EPA was created to ensure that all Americans can enjoy clean air to breathe, clean water to drink and have their health protected from environmental and climate threats," Perera said.

Staff at the Agriculture Department's Agricultural Research Service also received orders not to issue any news releases, photos, fact sheets and social media posts. After an email of the order leaked to the media, the agency said it would rescind the memo.

The AP reported over the weekend that staff employees at the Interior Department were temporarily ordered to stop making posts to its Twitter account after the official account of the National Park Service retweeted a pair of photos that compared those gathered for Trump's inauguration with the much larger crowd that attended Obama's swearing-in.

Trump later falsely claimed that more than 1 million people attended his inauguration, which Spicer insisted was the most watched in history.

In a test of what the new administration will tolerate, the official Twitter account of the Badlands National Park published a series of posts Tuesday accurately quoting climate science data that included the current record-setting high concentrations of carbon dioxide in the atmosphere. The tweets were soon deleted.

Montana asbestos victims to get $25M from state

KALISPELL — The state of Montana has reached a $25 million settlement with more than 1,000 victims of asbestos-related disease over claims that health officials failed to bring attention to the hazards of a contaminated mine.

BILLINGS — A deluge of opposition from dozens of American Indian tribes, conservation groups and some scientists is tying up a decision on lif…

A Trump administration clampdown on the Environmental Protection Agency is sowing confusion among states that rely on funding from the agency. The new administration has frozen new contracts and grants, and it's uncertain how widely the holdup will extend or how long it will last. A media blackout is preventing officials from providing details. The EPA also is taking a potential step toward killing environmental rules approved toward the end of the Obama administration.

Gazette opinion: What Trump team doesn’t want us to know

The U.S. government wants to keep the public in the dark. That’s nothing new to journalists and other citizens who have tried to access govern…

President Donald Trump signs an executive order on the Keystone XL pipeline Tuesday in the Oval Office of the White House in Washington.

White House press secretary Sean Spicer calls on a reporter during the daily briefing at the White House in Washington on Tuesday. Spicer answered questions about the Dakota Pipeline, infrastructure, jobs and other topics.