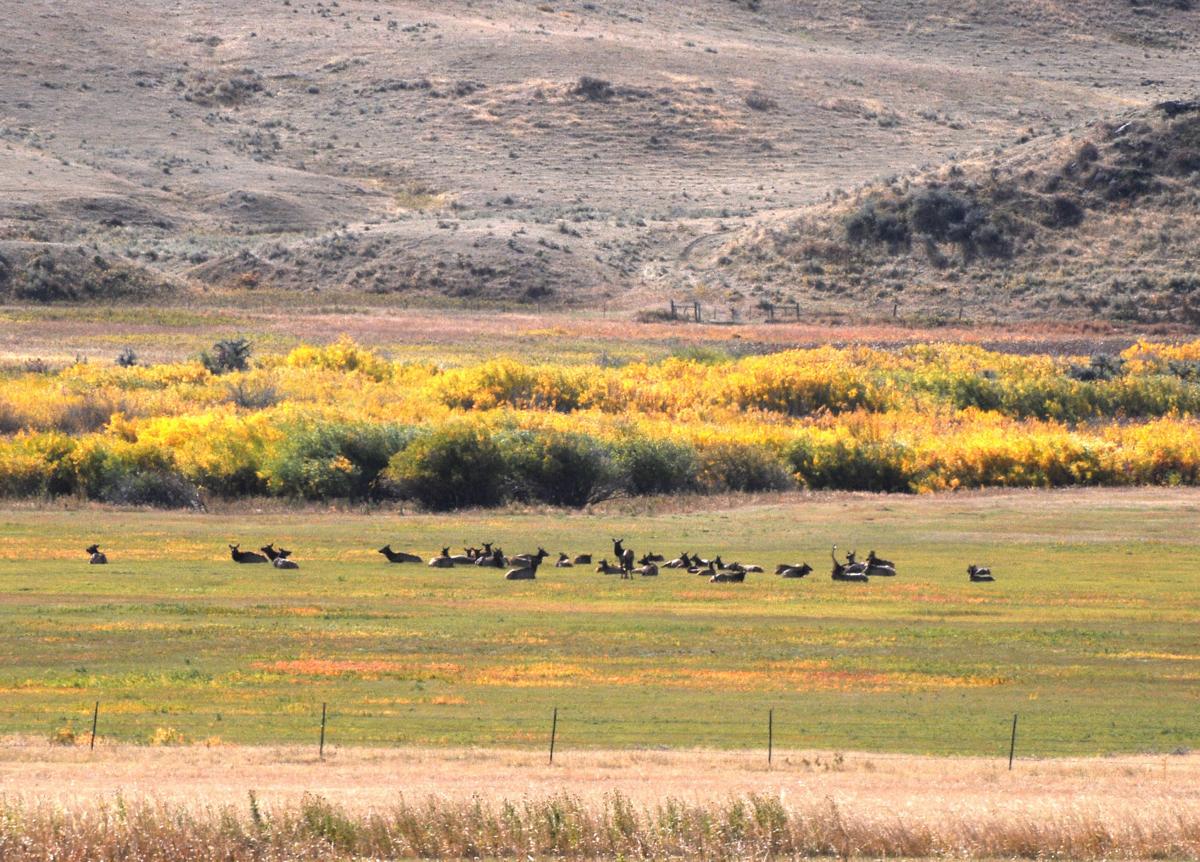 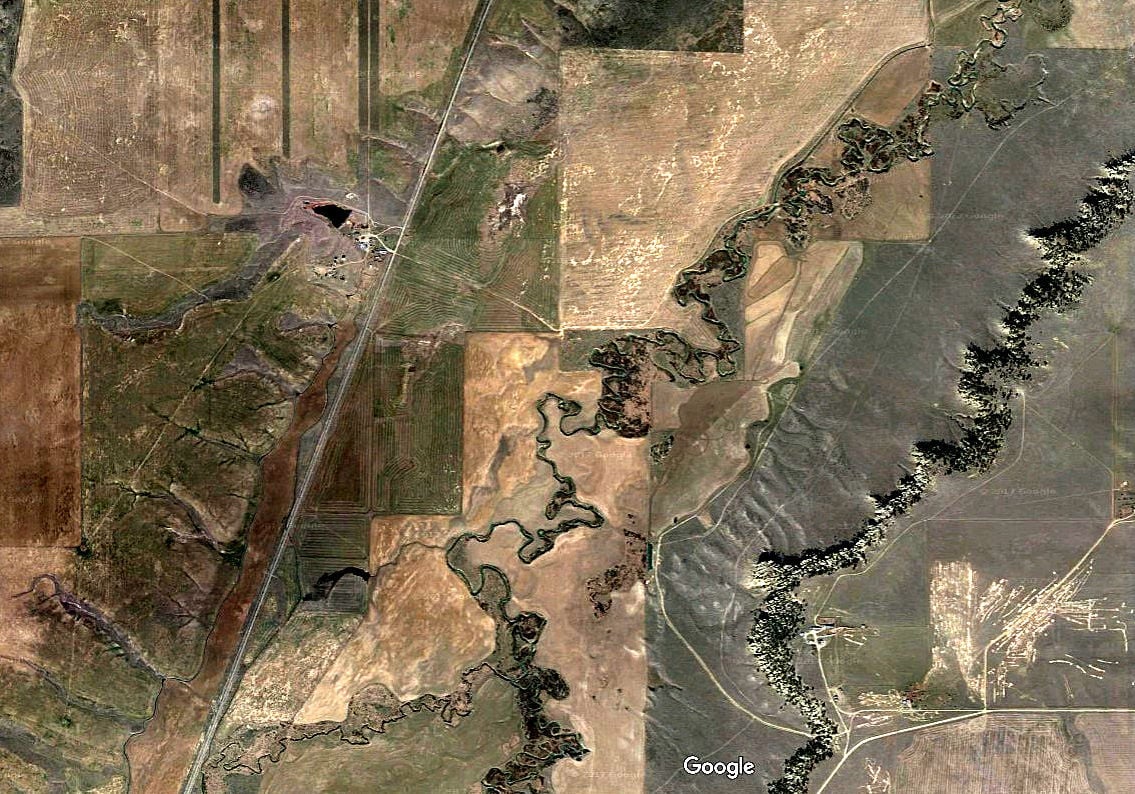 This Google Earth satellite image shows Flatwillow Creek winding through the center of the photo. Irrigation water drawn from the stream is at the center of an ongoing court battle.

A water rights case in Petroleum County has revealed an irrigation district in organizational disarray, accusations of perjury by witnesses and charges by attorneys that the water master overseeing the case ignored factual evidence.

The case revolves around Gene Klamert, a Winnett-area landowner who was accused of abandoning the most senior water right on Flatwillow Creek, which dates back to 1882. In June, Water Master Ben Sudduth, of the Montana Water Court, ruled in Klamert’s favor that he had not abandoned his right to use the water. The Water Court is a special district court that rules on water rights cases.

Sudduth’s decision was based on the testimony of lessees and neighbors of Klamert saying the land had been irrigated, along with expert testimony about satellite images that could be viewed through different filters to show crop growth on the ranch.

Klamert’s upstream neighbors, Daniel Iverson and Wilks Ranch Montana LTD, have argued since 2011 that the rancher abandoned his water right by not irrigating for 17 years. Following Sudduth’s ruling in Klamert’s favor, attorneys for Iverson and Wilks have filed objections.

Heightening the attention to this case is the fact that Dan and Farris Wilks, owners of Wilks Ranch Montana, are two of the largest private landowners in Montana. Their historic NBar Ranch — the first of many lands they purchased in the state — surrounds the upper reach of Flatwillow Creek.

Since their purchase of the NBar in 2011, the brothers amassed an estimated 672,000 acres by 2016, according to The Land Report, ranking them as the 11th largest landowners in the U.S. The Texas brothers made billions after selling their oil fracking business and have now invested heavily in land around the United States, especially in Montana.

But the brothers have also raised the ire of some locals by fencing off a public land inholding popular with elk hunters and for pursuing a land exchange with the BLM that would have given them that disputed property.

Part of Sudduth’s 35-page report paints the Flatwillow Improvement Association, which polices water use on the creek, in an unflattering light. Water use seemed to be on the “honor system.” Measurement of water use by irrigators was infrequent. “New water commissioners received little or no training … .” Consequently, record keeping by the water commissioners was poor or hard to understand. One previous water commissioner measured a ditch’s water velocity by throwing a stick or cigarette butt in the water.

That level of dysfunction might not be that unusual in the past, said Stan Bradshaw, legal counsel for Montana Trout Unlimited who has worked on water rights cases for the conservation group as well as wrote a buyers’ guide to water rights in Montana.

“When you look at the roster of water commissioners, some were only there for a year,” he said. “It’s easy to understand why. It’s crappy work, it doesn’t pay well and you’re often working with people who are pissed off at each other.”

But he also said the idea that the water commissioners’ records were going to be used as evidence in such cases was “wishful thinking” because they vary so widely in detail and even legibility because they “are written by hand by some guy out in the ditch.”

In their 52-page objection, attorneys Abigail Brown and Michael Cusick also take Sudduth, the water master, to task. They argued that “many” of his findings of fact are “clearly erroneous” or “clearly mistaken after a review of the entire record” and that Sudduth used his “own opinion or analysis instead of the opinion or testimony of witnesses.” They go on to allege that Sudduth “misapplies or misunderstands fundamental tenants of Montana water law.”

In conclusion they recommend the water judge “reject the Master’s report altogether” because the report is “clearly erroneous on multiple levels.”

Bradshaw said that although such terms may seem inflammatory to the layman, they are commonly applied phrases when attorneys are requesting a review of a judgment.

Perhaps more scathing are some of the claims made by Iverson’s attorney, Oliver Urick. In his objection Urick wrote that “it becomes apparent” reading the water master’s report that Sudduth “had decided Claimant was going to win” and that the water master “often misinterpreted or misstated the facts as if they were actually presented in evidence.”

He also attacked the testimony of one of Klamert’s lessees, Sig Pugrud, saying she “clearly committed perjury in her earlier testimony where she said she saw irrigation occurring everywhere, and the Wa(t)er Master chose to believe that.”

Bradshaw called that assertion astonishing, noting that perjury is a crime.

Likewise, Urick faulted the testimony of Brad Kinsey as “far from credible,” saying he “certainly sounded” as if he had “a vendetta against the N Bar and the subsequent owners, the Wilkses.”

On Tuesday, Nov. 1, Klamert's attorney, Jo Messex Casey, filed a 58-page response to the two objections. The other parties now have until Nov. 21 to file their replies.

In the document Casey contended that the objections raised were "not supported by or are contradicted by the record." She said the objectors couldn't even agree on the time period for when the water right was allegedly abandoned and that trying to use the irrigation district's records to back up their claim was a bad idea since those documents were "inconsistent and unreliable.

"To shore up their mistaken theory, the Objectors attempt to undermine the Water Master's discretion to weigh the evidence presented at trial, malign witnesses, and rely on their own less-than-credible witnesses," Casey wrote.

Without the water right, Casey wrote that Klamert will have to sell 40 percent of his cattle because he will be unable to raise enough hay for feed.

At issue in the case are 15 cubic feet per second of water, which is allotted to Klamert via his water right. Although this may seem like a small amount by some standards, a water commissioner’s 2008 letter entered as evidence in the hearing stated that if Klamert exercised the right on his lands so far downstream it would “radically change the way things are handled, with respect to other water users.”

Under Montana water law having a water right with an early priority date is beneficial since water is allocated on a “first in time is first in right” basis. The earlier the priority right the better the water right. Water rights in Montana also have value, increasing a property’s worth.

Bradshaw said in the past Montana’s Water Court judges have “cast a critical eye on assertions of abandonment.

“Abandonment is a hard thing to prove and the courts in Montana have been reluctant to find abandonment.”

The case will now proceed to associate water Judge Douglas Ritter, who will consider the objections and water master’s findings before issuing his decision, which can then be appealed to the Montana Supreme Court.

“It’s pretty clear there’s not going to be a settlement,” Bradshaw said, and continuing to fight the issue in court will drain everyone’s wallet.

A friend said the final court for Klamert will be bankruptcy court.

“Hiring expert witnesses and lawyers, this is an expensive hearing,” Bradshaw said. “For years, the water court in the 1980s was sort of letting people represent themselves. Over time it’s tightened up some.

“In a lot of instances simmering disputes get resolved because the parties can’t afford to get into this,” he added.

PABLO — The Confederated Salish and Kootenai Tribes plan to file more than 2,800 water claims both on and off the Flathead Indian Reservation …

The state of Montana is considering what would be the largest and most expensive purchase through its land banking program, almost 24,000 acre…

In the aftermath of the Lodgepole Complex fire, as cowboys on horseback rounded up the hoofed survivors from 270,000 charred acres, there were…

This Google Earth satellite image shows Flatwillow Creek winding through the center of the photo. Irrigation water drawn from the stream is at the center of an ongoing court battle.