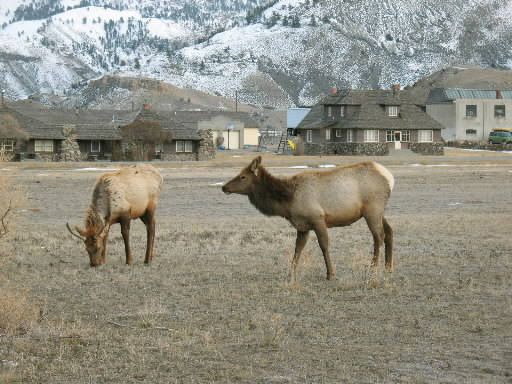 By BRETT FRENCH Of The Gazette Staff

Despite a sizable drop in the number of wolves residing inside Yellowstone National Park, the park's Northern Range elk herd suffered a 20 percent decline in 2010, according to an annual aerial survey completed in December.

Since 1995, when wolves were reintroduced to the park's ecosystem, the elk herd has declined 70 percent — from 16,791 to this year's 4,635. This year's figure, however, seems anomalous since elk numbers have fluctuated between 6,000 to 7,100 over the last four surveys, and even showed an upward trend in 2009's survey.

Doug Smith, Yellowstone's wolf biologist, said the decline could be a measurement error.

"We got a lot of snow early," he said. "Elk were in completely different places than in earlier years."

Smith also said predators could be to blame.

"It's safe to say this is one of the richest predator environments in North America," he said.

Grizzly bears, hunting pressure and drought are factors cited by wildlife biologists as contributing to the decline of Yellowstone's Northern Range elk herd, but it is federally reintroduced wolves that have borne the brunt of the public's fury — much of it from Montana hunters and hunting outfitters.

As the elk population has declined, though, wolf numbers have shown a similar drop. Disease and killings of wolves by each other have cut the wolf population on the Northern Range from 94 wolves in 2007 to 37 last year.

Biologists expect the reduction in the number of wolves and the elimination of Montana's late-season elk hunt will result in some increase in the elk population. But as Smith points out, there are other predators eating elk, including cougars, black bears and coyotes.

"It's more than just wolves," he said.

Although hunters once took hundreds of elk annually, hunters aren't much of a factor anymore, according to Karen Loveless, a Fish, Wildlife and Parks biologist in Livingston. This past season only 30 cow elk permits were allotted for the area north of Gardiner, which is where many of the elk migrate for winter. In 2005, 1,102 late-hunt permits were offered. Between the 2006 and 2010 seasons, that number was cut to 100 permits. No late hunt was held this year, and one won't be held next year.

"Our current harvest is extremely conservative," Loveless said. "It's really negligible what we can do right now."

Although hunters with a general elk license can shoot a bull in the area, Loveless said that's not a factor in the reproductive capacity of the herd.

Formerly when harvest limits were high, FWP tried to reduce the size of the burgeoning herd. Most agreed that 16,000 elk were too many. Loveless said the habitat in Montana's Paradise Valley, where part of the Northern Range herd winters, can support 3,000 to 5,000 elk. This year, Loveless counted a little more than 2,200 — the same as last year.

Maybe the elk herd's population decline has bottomed out. Loveless said the cow-to-calf ratio, one indicator of recruitment, has been good the last two years. As a general rule of thumb, 20 calves per 100 cows is seen as a minimum to maintain a herd. Last year, 22 calves per 100 cows were counted in the spring and this year the number was up to 34.

"So that seems to be an improvement, and we'd like to see that continue," Loveless said.

Grizzly bears are cited as one of the main predators of young elk calves. The calves are easy for bears to catch, calving traditionally occurs in the same areas so bears remember where to go for a meal, and grizzlies are looking for a good source of protein in June after relying on carcasses and green vegetation after emerging from hibernation.

According to the Interagency Grizzly Bear Study Team, grizzly numbers in the Greater Yellowstone Ecosystem are at capacity — nearly 600 animals. As elk numbers have declined, though, fewer grizzly bears are being seen on the Northern Range during elk calving season.

The biologists of the Northern Yellowstone Cooperative Wildlife Working Group, which compile the winter survey, agree that predation on newborn elk calves by grizzly bears may limit the elk population's ability to recover from earlier losses.

A long-term drought earlier this decade is also partly to blame, biologists agreed, by reducing the nutrition and abundance of forage. That reduction may have lowered reproduction rates in some elk.

"This is a multicausal decline," Smith said.