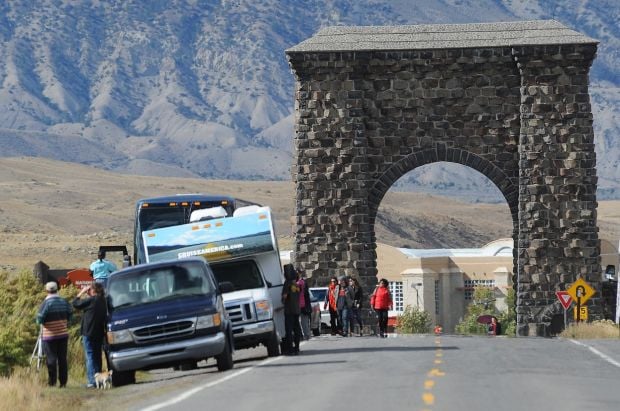 Tourists gather near the Roosevelt Arch to find Yellowstone National Park is closed to visitors as the government shutdown affects the park. 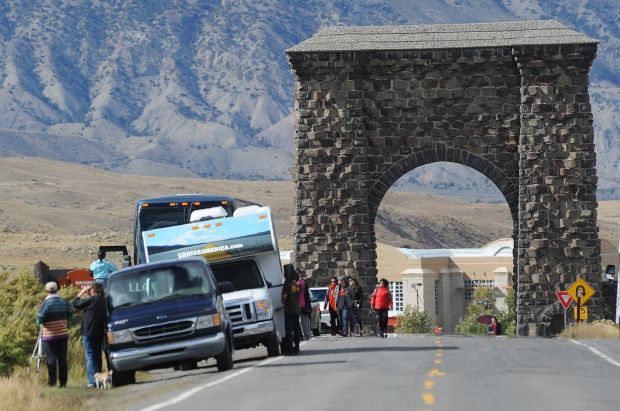 Increased fees at national parks this year will help fund improvements around Yellowstone National Park and others.

The last weeks of fall are critical to businesses in the four gateway communities surrounding Yellowstone National Park, a last chance to make money for the season.

Matt “Raz” Schneider, who owns The Miners Saloon in Cooke City, said the congressional shutdown of the federal government shot holes through his potential sales.

“We really depend on what we can get in the last few weeks of the season,” he said. “With that road being shut, we’re at a dead end. There’s no reason for someone to come up here.”

He figures the shutdown, if it goes past three weeks, could cost his business $30,000 in lost revenue.

The saloon is one of the few places to eat dinner in Cooke City this time of year, so Schneider canceled his regular delivery truck and drove to Bozeman to buy supplies for a limited menu.

The Miners Saloon normally closes Halloween, but with the shutdown, Schneider is operating with a skeleton crew on shorter hours. A dozen employees are left in the lurch.

“These people are really going to suffer. They counted on those last weeks of work and tips,” he said.

Down the main highway at the High Country Motel, Brandon Richardson took cancellation calls from would-be guests, including a tour bus from Jackson.

“I’ve lost the majority of my October reservations. Thousands and thousands of dollars worth are gone,” he said. “And in my experience, they aren’t coming back. They make other plans.”

Al Nash, Yellowstone Park’s public affairs chief, was almost single-handedly answering calls on Wednesday. Because the post-Labor Day is a popular time to visit, the park normally would have 54,000 recreational visits the first week of October and more than 138,000 for the month.

“Revenue impact to gateway communities for the first week of October would be $5.5 million,” Nash said.

If the shutdown lasts a month, the hit would climb to $13.5 million for the communities at the park's gateways, he said.

In addition, the National Park Service could lose camping, fishing and entrance fees worth $440,000 for October.

Those numbers don’t include fuel sales in the park, sales at the gift shops and stores or revenues lost to Xanterra Parks & Resorts, the Denver company that runs the concessions in Yellowstone and Glacier national parks.

The company loses nearly $1 million per day while the parks are closed, not including overhead. Salaried staff will get three weeks of pay. Seasonal employees aren’t guaranteed pay or work, but Xanterra will provide lodging and meals for up to three weeks.

The economic reach of the park also spills over to other cities in Montana and Wyoming.

“You’d be amazed how many people stay in Billings or Bozeman to travel here,” Nash said.

The main roads to Cooke City close in the winter, except for the northwest route across Yellowstone Park to Mammoth and Gardiner and Chief Joseph Scenic Highway, which is sometimes closed by weather.

But the federal shutdown means the road is closed to just about everyone, except park employees and workers and residents with a Cooke City sticker and “49” Park County license plates.

But a highway from Jackson, Wyo., to Dubois through Grand Teton National Park remains open to the public, Richardson said.

In Wyoming, US Highway 26/89/191 remains open from Jackson to Dubois, but drivers cannot stop in the park, said Grand Teton spokesman Jeanny Anzelmo-Sarles. The highway remains open because it is a major thoroughfare, she said.

In Yellowstone, the roads are run by the National Park Service, Nash said, with the exception of U.S. Highway 191 cutting through the northwest corner of the park, where there are no entrance stations.

In West Yellowstone, Marysue Costello, executive director of the Chamber of Commerce, said local businesses generate about $4.1 million in sales in October. The exact financial hit to the tourism-dependent town won’t be known until early November when West Yellowstone’s resort taxes are counted, she said. But she’s anticipating cancellations and lost revenues.

“It’s hard to have tours when you can’t tour,” Costello said.

With the park closed, neighboring communities are steering tourists to other local attractions.

“People are still looking for activities in and around Cody: the Buffalo Bill Center of the West, Old Trail Town, wildlife, some of the geography of the Yellowstone system, if not the park itself,” said Scott Balyo, executive director of the Cody Chamber of Commerce.

An interactive on the U.S. federal budget has been UPDATED with the breakdown of the Senate vote on a short-term spending bill.

Add Montana sexual and domestic violence shelters to the list of services vulnerable to the federal government shutdown.

Scan this code or visit insideyellowstone.com to download the free Yellowstone app

American Indian tribes have more than access to national parks on the line with the government shutdown, as federal funding has been cut off f…

Federal employees in Montana showed up to work on Tuesday morning to get the news about the federal government shutdown.

WEST GLACIER — You can’t get into Glacier National Park.

MISSOULA — Two federal agencies housed at the University of Montana were either closed or in the process of shutting down early Tuesday, follo…

With a federal government shutdown looming Monday, few agencies would say what was in store for government services or Montana’s 12,400 federa…

Tourists gather near the Roosevelt Arch to find Yellowstone National Park is closed to visitors as the government shutdown affects the park.

Increased fees at national parks this year will help fund improvements around Yellowstone National Park and others.