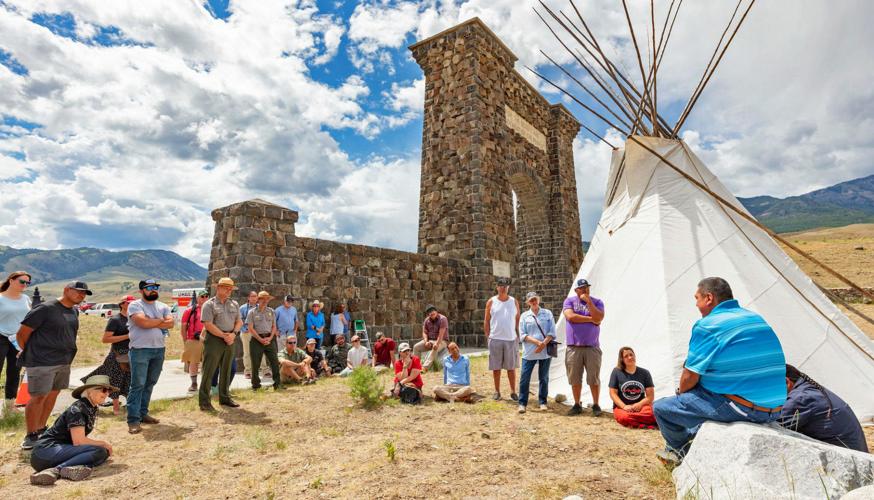 Crow tribal members talk about the history of the tepee during a visit to Yellowstone National Park's North Entrance in June. 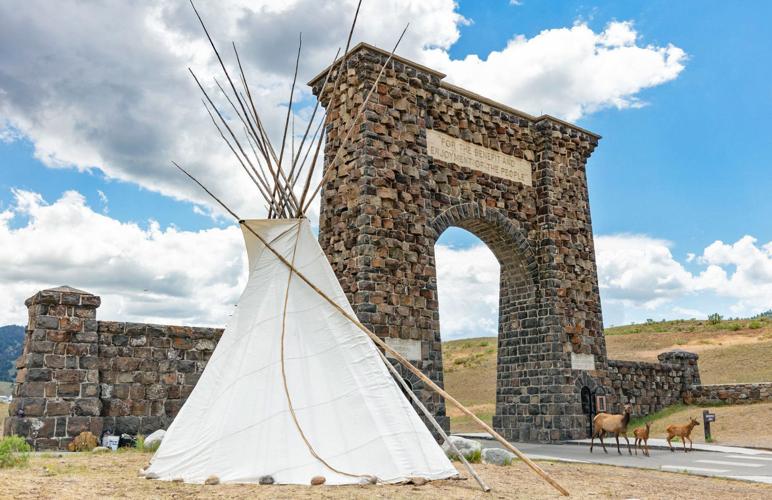 A Crow tepee was set up next to the Roosevelt Arch at the North Entrance to Yellowstone National Park in June this year as part of a project to install indigenous art in the park for its 150th anniversary next year.

Some June visitors to Yellowstone National Park were treated to a Crow-style teepee set up next to the Roosevelt Arch at the North Entrance.

During a ceremony at the teepee, tribal members recounted the structure’s origin and sang an honor song. Participants included members and college representatives from the Crow, Northern Cheyenne, Salish-Kootenai and Northern and Eastern Shoshone tribes.

The ritual was the culmination of a gathering of about a dozen tribal representatives at the nearby B Bar Ranch to discuss Indigenous place-based art installations next year to mark the 150th anniversary of the creation of Yellowstone, the world’s first national park.

The park was designated on March 1, 1872, by President Ulysses S. Grant after he signed the act protecting the unique landscape, which is dotted with geothermal features like geysers, mud pots and hot pools.

“As the Yellowstone 150th anniversary approaches in 2022, the park is working to engage with tribes around potential actions to expand tribal presence and representation of their important cultural heritage in the park during the anniversary and beyond,” according to a park news release.

MaryBeth Morand, executive co-director of Bozeman-based Mountain Time Arts, helped facilitate the retreat. Morand said her staff will be working with the tribal representatives to develop art projects that “reflect what the stakeholders feel about the landscape.

“No land is neutral,” she noted. “There’s always been a narrative.”

The Native American narrative will be an important part of Yellowstone’s celebration because the land was long used prior to Euro-Americans' arrival and the creation of the park, Morand added. For many decades, Indigenous occupation and use of Yellowstone was downplayed or dismissed. Archaeological digs have helped reveal the long history of Native people’s presence in the region, dating back to the end of the last Ice Age, about 11,000 years ago. Evidence of hunting, fishing and mining Yellowstone’s obsidian rock for tools has been found.

Euro-American occupation of the West in the 1800s overlooked or dismissed Native Americans’ presence, with some place names in Yellowstone honoring men of the times who are now considered racist — such as Gustavus Cheyney Doane, whose name was affixed to a Yellowstone peak.

Doane was a lieutenant under Maj. Eugene Baker’s command when the U.S. Army killed an estimated 200 members of Heavy Runner’s Piegan Blackfeet tribe in Montana territory on Jan. 23, 1870. The U.S. Board on Geographic Names has been petitioned to change the names for several such landmarks. In July, congressional Democrats introduced a bill to rename more than 1,400 places across the United States that have racist or bigoted names.

The discussion hasn’t been limited just to place names. In April the cover of Atlantic magazine featured an article titled “Return the National Parks to the Tribes,” highlighting the debate that continues to swirl around the displacement of native people across North America.

Atlantic deputy editor Ross Andersen noted the idea of wilderness preservation — articulated by John Muir in the 1800s that led to the preservation of places like Yellowstone and Yosemite — is “a fine sentiment, except that Muir’s most beloved peaks, canyons, and forests were empty because they’d been depopulated by force within his own living memory.”

Yellowstone Superintendent Cam Sholly met with the tribal representatives in June to “further the conversation about strengthening the relationship and creating a vision for the future,” according to a park press release. That was preceded in April by a park-tribal “listening session where discussions centered on potential actions and initiatives that Yellowstone and interested tribes could collaborate on.

“Our goal is to substantially engage every tribe connected to Yellowstone,” Sholly said. “It’s very important that the 150th anniversary is not just about Yellowstone as a national park, but also a pivotal opportunity for us to listen to and work more closely with all associated tribes. Our intent is to partner with associated tribes to better honor their significantly important cultures and heritage in this area.”

The public art installations, titled “Yellowstone Revealed,” would be one part of the interaction to “offer viewers an opportunity to explore the longer Indigenous history of the park,” according to Mountain Time Arts.

Future retreats — attended by Indigenous elders, academics, historians, archaeologists, artists and activists — are also planned to draw from faculty and senior administrators from Montana and Wyoming’s tribal colleges “in hopes of creating an awareness through art that will create new curriculum and a role for Indigenous students in the future of America’s national parks,” Mountain Time Arts wrote in a press release.

The organization is also working to engage locals, starting with the Gardiner Chamber of Commerce and Park County Commission, to get the word out, Morand said.

“Because it’s place-based, we really need to work across the community,” she said. “The whole point of it is to open these dialogues and maybe bring people together to create new partnerships and have this project enrich the discussion.”

David Treuer wrote in the Atlantic article, “We live in a time of historical reconsideration, as more and more people recognize that the sins of the past still haunt the present. For Native Americans, there can be no better remedy for the theft of land than land. And for us, no lands are as spiritually significant as the national parks. They should be returned to us. Indians should tend — and protect and preserve — these favored gardens again.”

Yellowstone’s staff noted the National Park Service has been working with 27 tribes who have “historic and modern connections to the lands and resources now found within the park.” That work includes the transfer of park bison to the Fort Peck Reservation for eventual redistribution to other tribal entities.

“The park also initiated a multi-year partnership with Native American Studies faculty at Salish Kootenai College as they bring a unique understanding of the cultural importance of archaeological resources within the park,” the agency said.

Technology offers great tools for archaeologists, such as analyzing the residue in ancient ceramic containers to reveal what they contained, o…

Hunters similar across the ages

Despite all of the technological advances hunters have seen developed in the last 50 years — no-scent sprays, exceptional optics and weatherpr…

The lack of rain in June and throughout much of the summer meant the park saw some of its driest conditions since the 1930 Dust Bowl era.

The pandemic will preclude Yellowstone National Park from planning any large-scale events to mark its 150th anniversary this year.

Until about three years ago, the examination of burial sites or historic human remains was an informal effort between a biological anthropologist from the University of Wyoming, the state archaeologist and volunteers.

A perceptible disconnect exists between the realities of tribal communities and traditional sources of capital development.

Gunman kills 10 in ‘racially motivated’ shooting in Buffalo, US

Crow tribal members talk about the history of the tepee during a visit to Yellowstone National Park's North Entrance in June.

A Crow tepee was set up next to the Roosevelt Arch at the North Entrance to Yellowstone National Park in June this year as part of a project to install indigenous art in the park for its 150th anniversary next year.