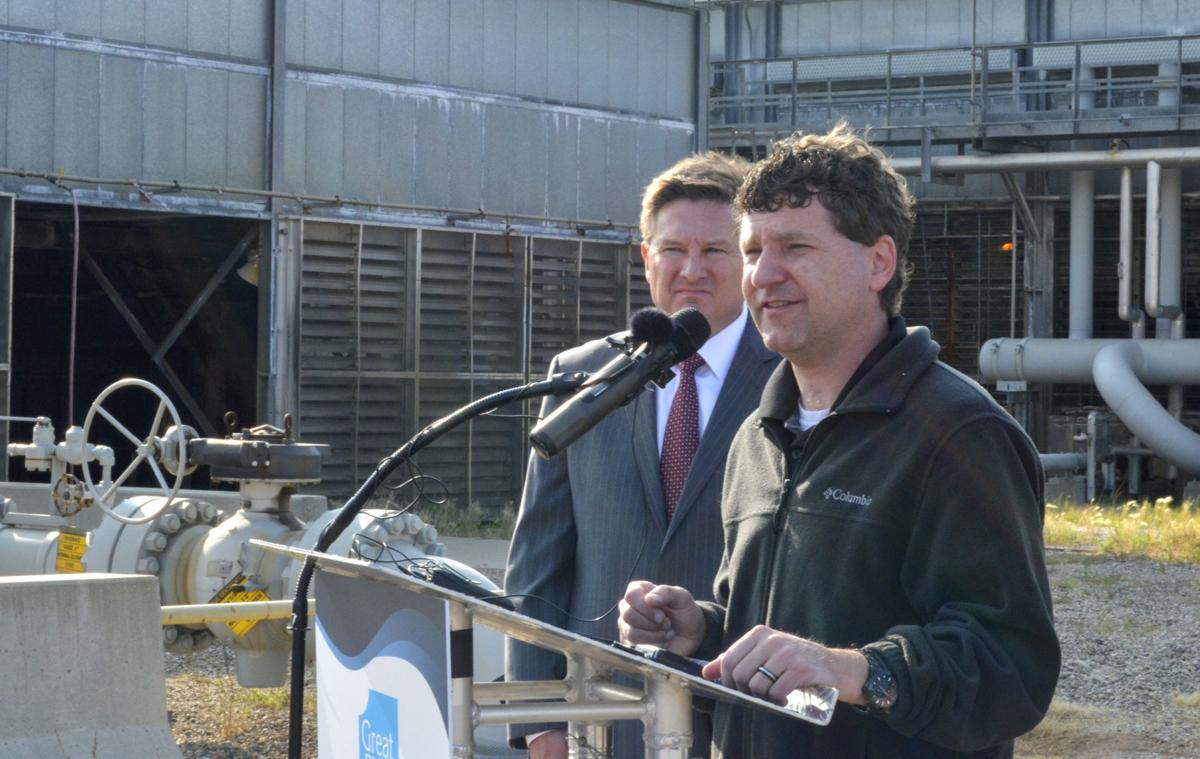 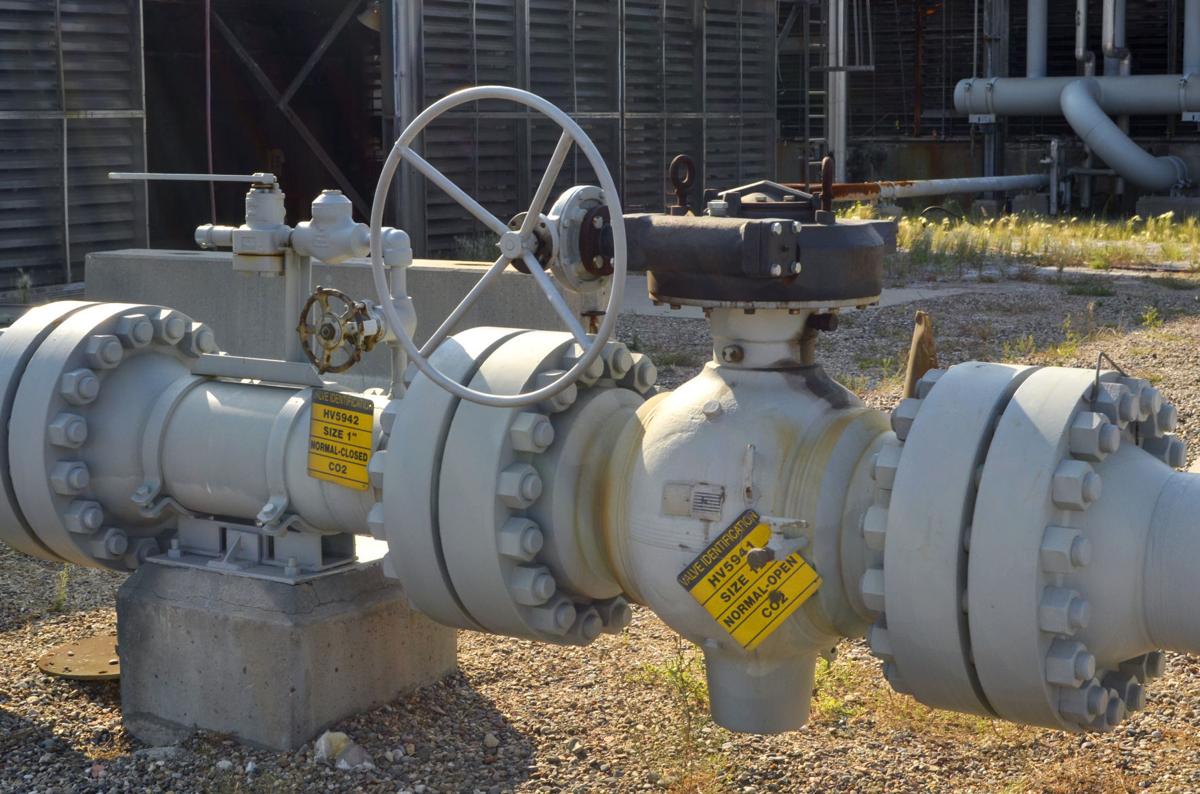 Carbon dioxide is transported through a pipeline that starts here at Basin Electric's Great Plains Synfuels Plant and extends to Canada. 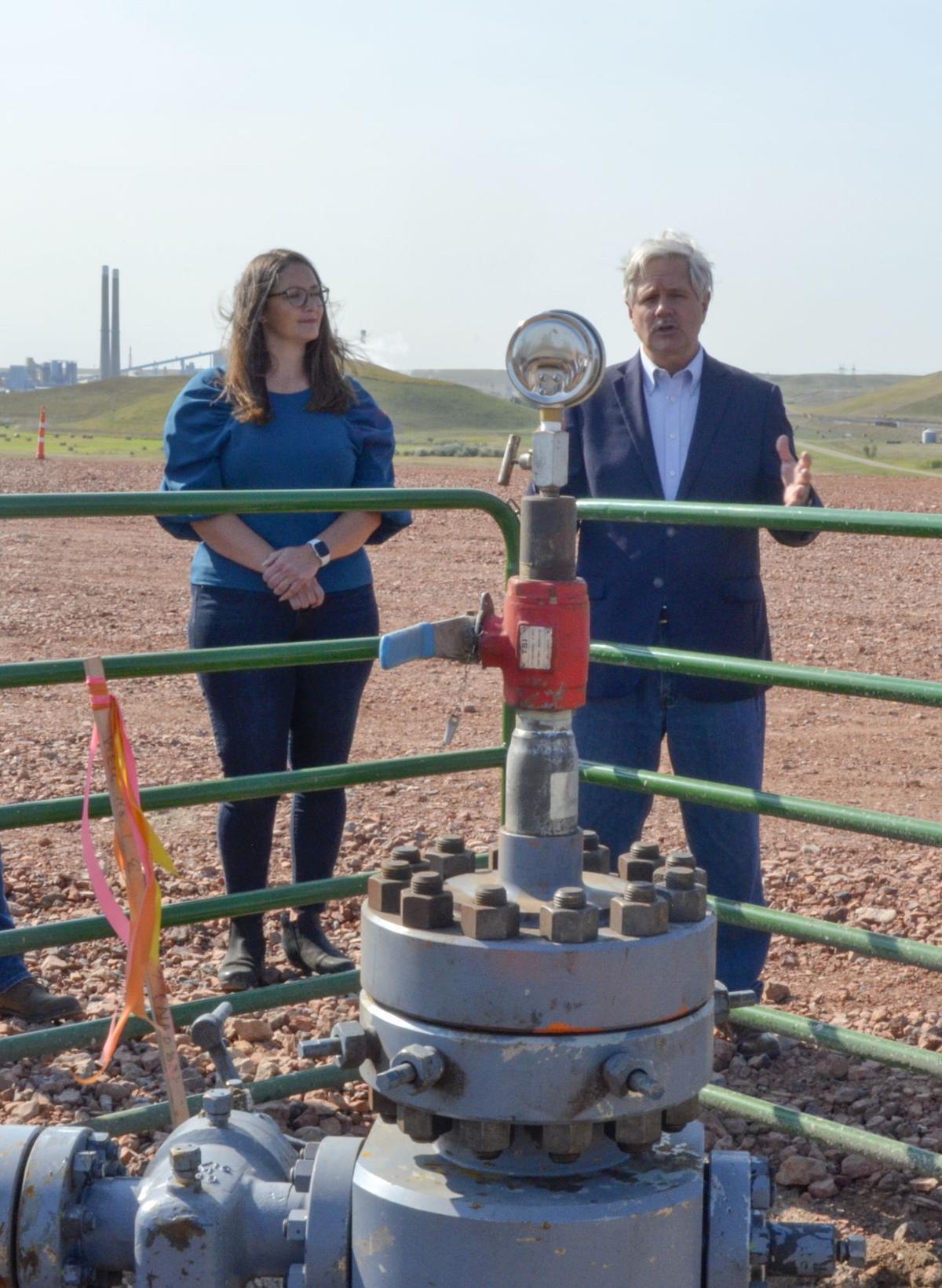 BEULAH, N.D. — Basin Electric Power Cooperative plans to expand the carbon capture system at its Great Plains Synfuels Plant near Beulah to contain as much as 70% of the carbon dioxide the facility generates.

The co-op has secured a state permit to build a short pipeline slated to carry some of the carbon dioxide from the plant to a site nearby where it will be injected underground. Work on the line, which will extend north to Coteau Properties Co. land, is expected to begin next month. Coteau operates the mine that feeds coal to the synfuels plant.

Basin subsidiary Dakota Gasification Co. runs the plant and already captures about 2 million metric tons of carbon dioxide each year from the facility, which produces synthetic natural gas from coal along with a host of other products. The gas is compressed into a liquid form and piped north into Canada where it’s sent underground into old oil fields to boost their production.

“With the expansion, we’re looking to go up to about 3 million metric tons a year almost right away,” said Trinity Turnbow, assistant plant and operations manager.

The carbon dioxide is separated from the stream of raw gas produced at the plant and compressed into a liquid form. The synfuels plant has been doing that for 20 years to prepare the carbon dioxide for transport to Canada.

Basin is in the process of selling the synfuels plant to Bakken Energy, which is partnering with Mitsubishi Power Americas to produce hydrogen at the site. The plant employs more than 500 people, and it’s faced financial woes amid low natural gas prices.

Bakken Energy and Mitsubishi plan to capture carbon dioxide generated by hydrogen production, and Turnbow said equipment already at the plant that handles carbon emissions could be used as part of that process. Carbon dioxide is a greenhouse gas that contributes to climate change when emitted into the atmosphere.

Basin has partnered with Colorado-based Carbon Vault, a subsidiary of Rampart Energy, to inject the additional carbon dioxide it plans to capture underground. Carbon Vault drilled a test well at the proposed injection site this summer to examine the rocks where it wants to store the carbon dioxide.

The company is eyeing the Broom Creek formation about 6,000 feet deep. Above and below it are impermeable shale rocks meant to act as a seal so that the carbon dioxide forms a plume in the Broom Creek layer and stays there without migrating back up to the earth’s surface, Carbon Vault President Van Spence said.

The company ultimately plans to drill six injection wells. Spence said the area is ideal for such a project in part because it’s far from the Bakken oil fields of western North Dakota.

“One of the concerns when you’re trying to store this stuff is to make sure this is where it stays put,” he said. “If it’s been pin-cushioned with other oil wells and if you have a bad plugging job on an old well, that’s a conduit where you could have a problem.”

The injection site is outside the oil patch, so “we don’t really have to worry about that,” Spence said.

Representatives of Basin and Carbon Vault said they will take measures to ensure the pipeline and injection site operate safely. Basin will regularly launch a device known as a pig that crawls through the pipeline to detect any anomalies, Turnbow said.

Carbon Vault has taken steps to prevent corrosion within the test well it drilled, which will eventually be used as one of the injection wells. Carbon dioxide and water together can be corrosive, so parts of the well that might come into contact with those substances use resistant stainless steel material, Spence said.

The company plans to apply by the end of the year for state permits to operate the injection site. Officials hope to start sending carbon dioxide underground next summer.

The project is one of numerous carbon capture efforts underway in North Dakota. The concept is popular among ethanol producers and coal-fired power plant operators. All seek to take advantage of a federal tax credit designated for carbon dioxide storage.

Although there are similarities in the projects, each industry goes about capturing carbon dioxide in different ways. Power plants, for example, may require extensive retrofits that could run into the billions of dollars.

In contrast, the project at the synfuels plant will cost in the tens of millions of dollars, according to Basin.

The flurry of carbon capture projects in North Dakota is in part due to the fact that the state was the first in the nation to secure authority from the U.S. Environmental Protection Agency to permit the injection of carbon dioxide underground.

“The regulatory framework is so much friendlier here, and they’re so much further out ahead than most of the other states,” Spence said.

Sen. John Hoeven has long been active in efforts at the state and federal level to bring carbon capture projects to fruition in North Dakota. He led an event at the synfuels plant Thursday to formally announce the project.

“We’re the leader of the pack,” he said. “This is world-leading innovation that this company, Basin Electric, is doing.”

Bridger Coal Company will close its underground mining operation near Rock Springs in November. Ninety-four employees will be affected, though not all will be laid off.

92 Bridger mine layoffs have been anticipated for years

Fifteen of the workers will move to jobs at the neighboring surface mine, and 10 will retire. The company expects another 10–12 positions to open at the surface mine before the closure. That leaves upwards of 50 workers lacking a clear path to employment after November.

The Zoom event, "A Climate Conversation," will take place on Oct. 28 at 7 p.m. and Gore will be accompanied by former U.S. Sen. and Ambassador Max Baucus.

Carbon dioxide is transported through a pipeline that starts here at Basin Electric's Great Plains Synfuels Plant and extends to Canada.