Travelers allowed on Highway 212 Thursday morning passed through a curtain of smoke before reaching Lame Deer.

Two wildfires nearly put the Northern Cheyenne capital in a vice, and sparked a massive response from the tribal government. During a meeting Thursday, the tribe’s council chamber was transformed into an incident command center.

Councilwoman Norma Gourneau laid out the priorities for the tribal council to the Gazette following the briefing: “No loss of life. Taking care of our members, specifically our elders and the handicapped. Making sure people stay informed and protecting structures, but that’s low on the list.”

She said that as of Thursday's meeting, no injuries had been reported due to either fire.

Tribal, local and federal firefighters have been wrangling with wildfires burning in Rosebud County and on the reservation since Sunday, when the Richard Spring fire began southwest of Colstrip. It has since spread to over 166,000 acres, according to a National Interagency Coordination Center report on Thursday morning.

A second fire, just west of Lame Deer, was reported Tuesday. It has since reached over 4,600 acres, according to NIFC. The cause of the fire is still under investigation.

Officials urged all Lame Deer residents to leave town about 11 p.m. Wednesday night, and not return until told to. Transportation was provided for some residents at the town's Boys and Girls Club.

Gourneau braced herself at the start of the week. She joined the “town crier,” who drives a Subaru fitted with a PA system, on a trip to Ashland on Tuesday to alert residents to be prepared to evacuate. They left with the Subaru speckled red with retardant dumped by a C-130.

The only real frustration, she said, was seeing the number of people who stayed in town, despite the barrage of warnings both online and from the town crier.

John Grinsell, who serves in law enforcement for the Northern Cheyenne, said during the briefing that some people in Lame Deer can be "stubborn," resisting the evacuation order. He and others working security still managed to run two buses with evacuees to Red Cross shelters Wednesday night.

Around lunchtime Thursday, food started flowing out of the Boys and Girls Club. Tribal members loaded boxes of sack lunches into the back of a minivan bound for Birney. District representative Gwen Talawyma and three of her children then went door-to-door.

“I’ve been doing this since the pandemic … The announcement went out about food in Lame Deer, but a lot of people here still aren’t aware of it. I try to keep them as informed as possible,” said Talawyma, elected to the tribal council in November of last year.

On the southern edge of town, a black reminder of the fire season stretched from a private lot to the road. While the reservation prepared for the oncoming Richard Spring fire Tuesday, a trailer erupted in flames.

Talawyma’s adolescent sons were among the first to help snuff out the flames, shoveling dirt onto the fire to halt the spread.

During her trip through Birney, she reminded residents that the town was still under a pre-evacuation notice. Flashlights, she told the Gazette, were the biggest necessity for residents. They just saw their lights come back on the previous night after two days with no electricity.

Power and cell service kicked back on Wednesday evening for the larger towns on the reservation, as well as Ashland and Broadus, after the Richard Spring fire ate through several dozen power poles in the region. The damage to the transmission lines left the majority of Tongue River Electric Cooperative customers without power.

Fire crossing Highway 212 caused a closure of the highway Wednesday night. It remains closed "until further notice" between Crow Agency and Broadus, according to a social media post from Rosebud County Sheriff Allen Fulton. Local traffic and deliveries are being allowed, and drivers are being warned about firefighter activity and cattle on the roadway. As of early Thursday morning, the fire was still active south of Highway 212 and east of Lame Deer.

The Red Cross has established an evacuation center in Busby at the Northern Cheyenne High School. The shelter is located at 1 Campus Drive.

Andrew Harper with the Red Cross, also present Thursday in Lame Deer, said at least 150 people have come through the shelter in Busby. That includes both elders and entire families. At least 30 elders are staying in hotel rooms in Hardin, the cost covered by the tribe.

Additionally, the Red Cross is assisting with a partnership between the Crow and Northern Cheyenne Tribes to operate a shelter at the Crow Tribal Multi-Purpose Building in Crow Agency. That shelter is located at 178 Multi-Purpose Road.

Photos from the Richard Spring fire in Rosebud County on Wednesday, Aug. 11, 2021.

A 150,000-acre wildfire, the largest in Montana this year to date, flared up only a mile away from the town of 400 people just east of the Northern Cheyenne Reservation.

Sheriff Allen Fulton was trying to communicate information about the rapidly evolving situation in a place where cell service is spotty on the best days, but absent Wednesday after the fire caused a vast power outage that could take days to fully repair.

Flames jumped Highway 212 in Big Horn County near Muddy Cluster, causing officials to close the road between Crow Agency and Broadus for the second time this week. Highway 39 from Lame Deer to Colstrip remained open to limited traffic.

Jennifer Costich with Northern Rockies Incident Management said “there is the potential for wind gusts today, so there are still concerns for Lame Deer, which is still under evacuation status."

While winds have died down, rising temperatures may hinder Richard Spring firefighting efforts.

Richard Spring fire was 65% contained Tuesday, although additional firefighting crews are hard to come by. 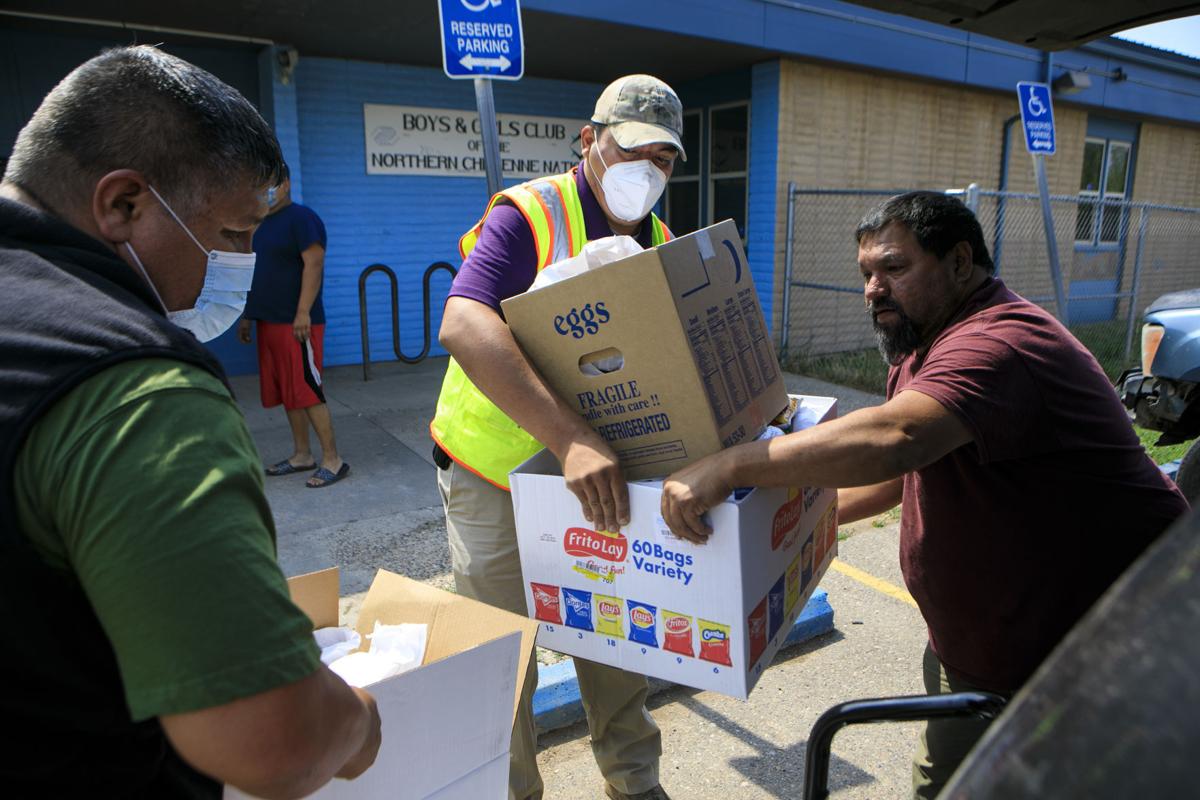 Volunteers load up lunches to be delivered to people without power, which was caused by the Richard Spring fire Thursday in Lame Deer. 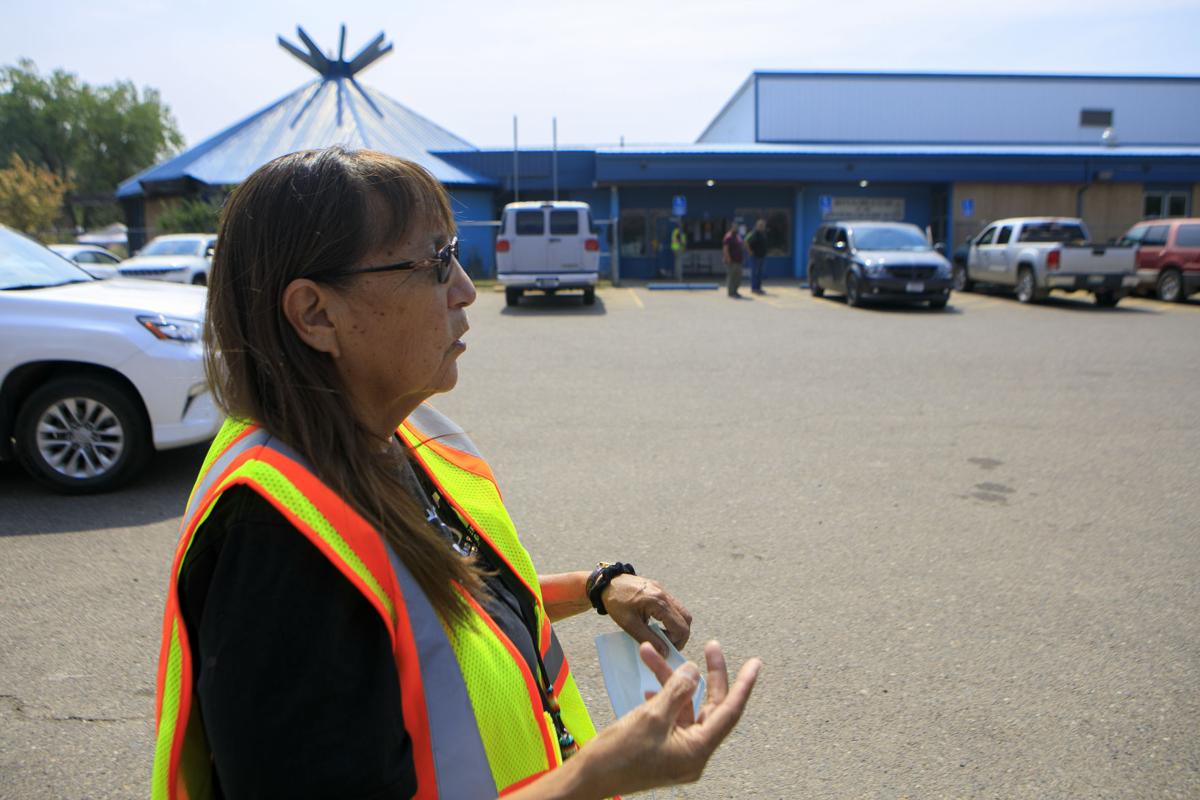 Councilmember Norma Gourneau walks over to the Boys & Girls Club to help load food into the back of a van during the Richard Spring fire Thursday in Lame Deer. 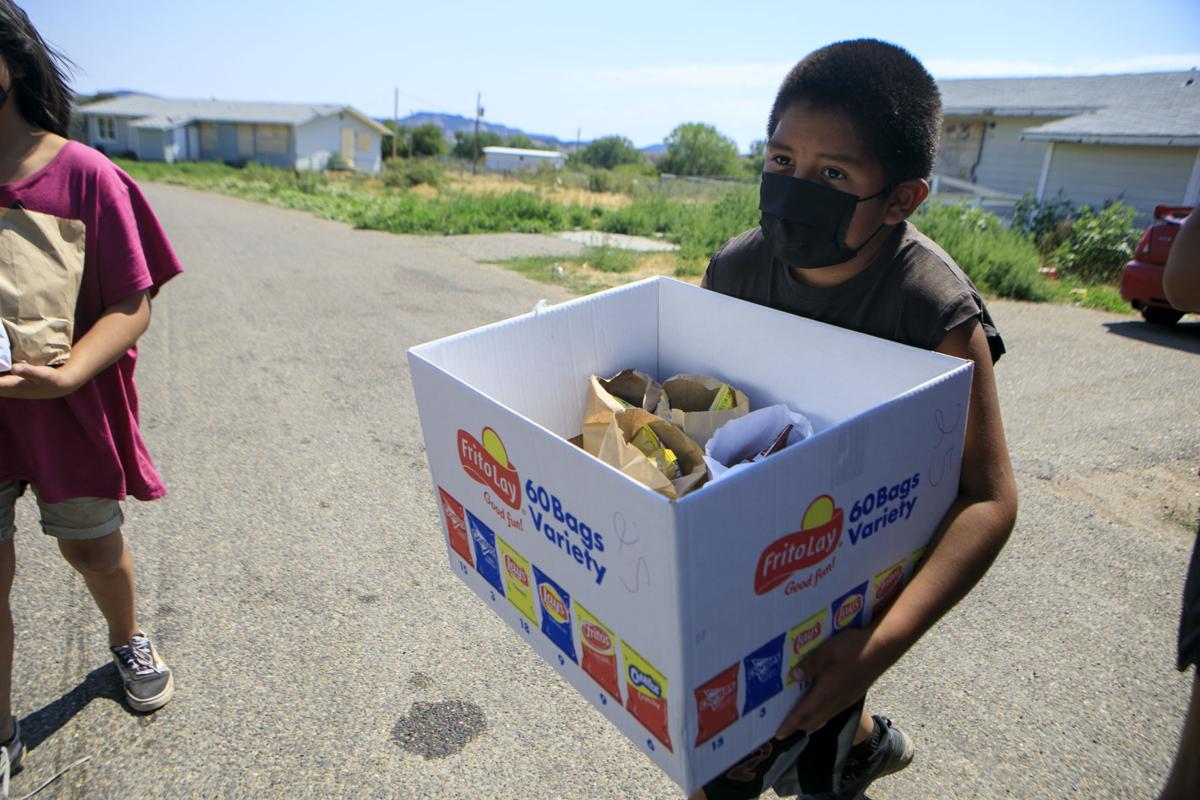 Ten-year-old Trae Duran goes from door to door delivering food from the Boys & Girls Club to families without power Thursday, August 12, 2021 in Birney. The Richard Spring fire has taken out power for thousands of people on the Northern Cheyenne reservation. 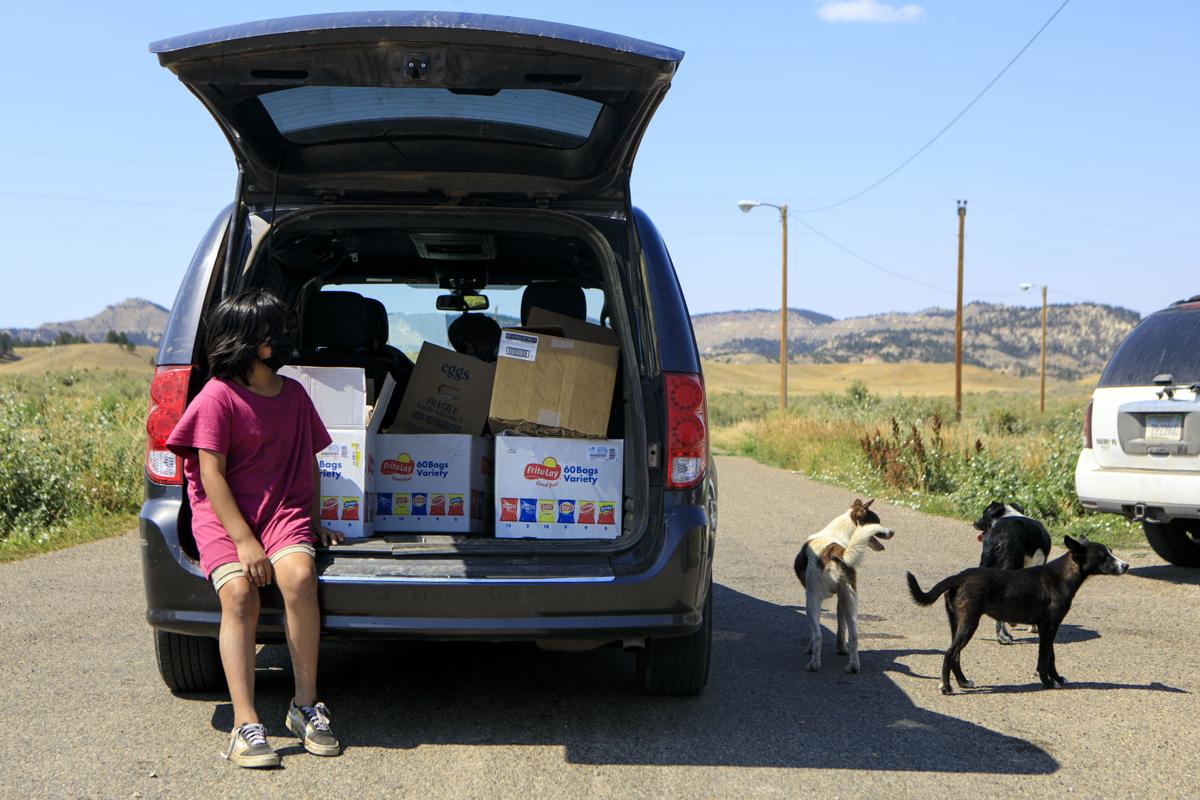 Simaya Duran, 9, waits to see how much food she needs to deliver to a home while handing out meals to people without power Thursday, August 12, 2021 in Birney.