“Pack rats compulsively gather all kinds of stuff in their nests — bones, shiny stuff, owl pellets, scat — and they bring it to their nest,” said Jenny McGuire, an assistant professor of Earth and Atmospheric Sciences at Georgia Tech University.

At Natural Trap Cave in the foothills of the Bighorn Mountains, pack rats have built large nests on ledges above and around the 85-foot deep hole in the ground. Over the years, some of those objects have fallen to the bottom of the cave and been buried by sediment, leaving clues to the past.

“It tells you what the community looked like at that time,” said Julia Schap, a conservation paleobiologist working on her PhD at Georgia Tech. “We’re able to find a wide variety,” which also includes animals that have fallen in on their own.

From this buried assemblage, scientists like McGuire and her colleague on the dig — Des Moines University associate professor and vertebrate paleontologist Julie Meachen — are building a greater understanding of how the region, its animal and plant life changed over the past 30,000 years.

What they decipher could help us understand how North America will respond to climate change.

During her six summers working in Natural Trap Cave and at sites like Rancho La Brea Tar Pits in Los Angeles, Meachen has already learned that rare species became more abundant as the earth’s climate changed, partly because there are fewer of the dominating common species around to compete with.

Ideally, Meachen would like to unearth ancient horse and pronghorn teeth from Natural Trap Cave to assess water fluctuations in the past. Horses are more sensitive to loss of water sources than pronghorns, which have adapted to live in dry areas.

Like tree rings, teeth can reveal periods of drought and wet years, as well as what the animals were eating.

“Teeth are the main mode to extract the data,” Meachen said. “The goal is to track drought sensitive and insensitive species. What can we learn from that about modern species?”

Ungulates like bison, bighorn sheep, North American horses that went extinct and pronghorns are all related to animals still around, she added.

One of the graduate students at the cave this year is setting traps above ground to survey the number of mammals and lizards. That will help the scientists understand the relative abundance of animals near the cave today versus 30,000 years ago.

It will also help scientists understand what species were common and which were rare, and how rare versus common species persist over time.

“I’m really excited about having that modern survey,” McGuire said.

During the period in North America when glaciers reached farthest south, known as the Last Glacial Maximum, it is theorized that a narrow passageway may have opened a corridor allowing travel from north to south. Prior to 25,000 years ago, animals may have been able to walk from Siberia to the Bering Strait and across to Alaska, Canada and then south into what is now the United States. That passageway may have funneled mammals to the area near Natural Trap Cave.

At some point around 11,000 to 14,000 years ago, as the glaciers retreated and more humans explored the region, North America lost more than half of its large mammal species, everything from mammoths to short-faced bears and large dire wolves.

“Many species went extinct, and what we have around today are remnant species,” Meachen said.

Mountain lions today are not related to ones from the last ice age. The same goes for today’s wolves which are distinctly different from ice age dire wolves. One theory is that these animals that are more common today may have survived in small populations in places like South America and eventually recolonized the northern half of the continent.

“We’re starting to get a picture that more species went extinct in North America than anywhere else,” McGuire said.

As glaciers disappeared, the plants would have changed rapidly as well. Animals that had adapted to certain food sources may have struggled to change fast enough, McGuire explained, noting that trees take a long time to grow.

“Humans come in and basically exacerbate things,” Meachen said. “It may not even be that humans are killing animals. Maybe they are modifying the habitat even more and it has a cascade effect.”

A research paper Meachen wrote for publication, due out in January, tracks a similar change in mammal disbursement following the industrial revolution. Large mammals shifted away from areas modified by humans to live in deserts and on mountain tops. Meanwhile, smaller mammals expanded into agricultural areas thriving in “micro environments” that humans created, she said.

This summer the researchers are working to find a missing period in the cave’s geological time scale — between 9,000 and 19,000 years when the extinction event occurred.

“We’re trying to figure out how water moves in the cave,” McGuire said, in hopes of finding the lost 10,000 years.

By moving some large boulders, the scientists are hoping to unearth the missing periods.

Yet she is hopeful that animals, and bits of animals that have fallen into the cave from pack rat nests, may help broaden scientists’ understanding of that mass extinction event.

“I think we’re really close to having a nice mid-level picture,” McGuire said. “We’ll be looking for very specific information to answer questions.”

LOVELL, Wyo. — For portions of the past two summers Kacia Cain — an otherwise easygoing high school biology teacher in Des Moines, Iowa — has …

LOVELL, Wyo. — Out of the darkness of an ancient cavern near here light is being shone on the last ice age.

It’s nearly 100 degrees on the bare limestone near the western base of Wyoming’s Bighorn Mountains, with shade scarce.

Man who guided illegally in Yellowstone gets week in jail

A judge has sentenced an Oklahoma man to a week in jail and ordered him to pay $1,100 for guiding visitors illegally in Yellowstone National Park. 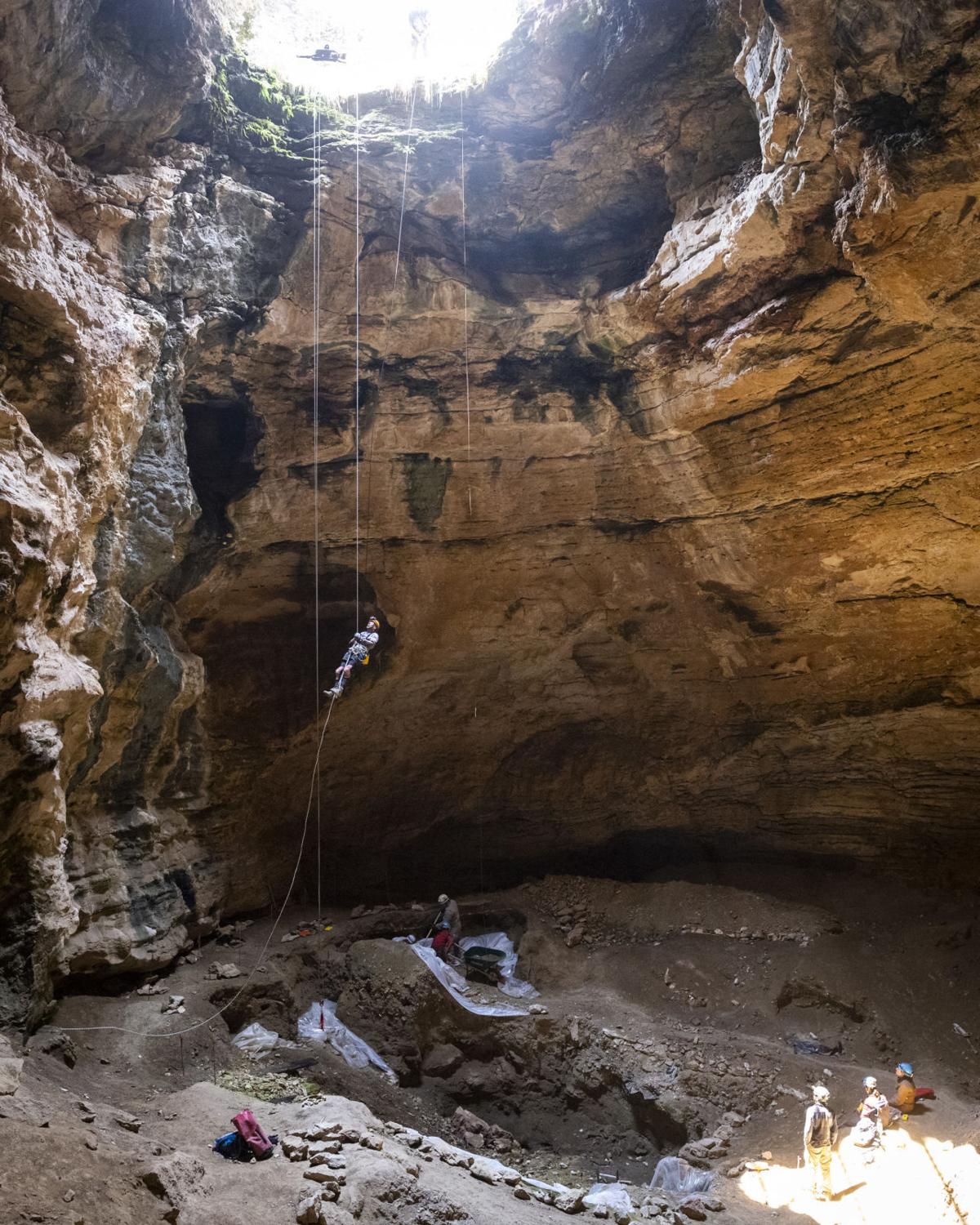 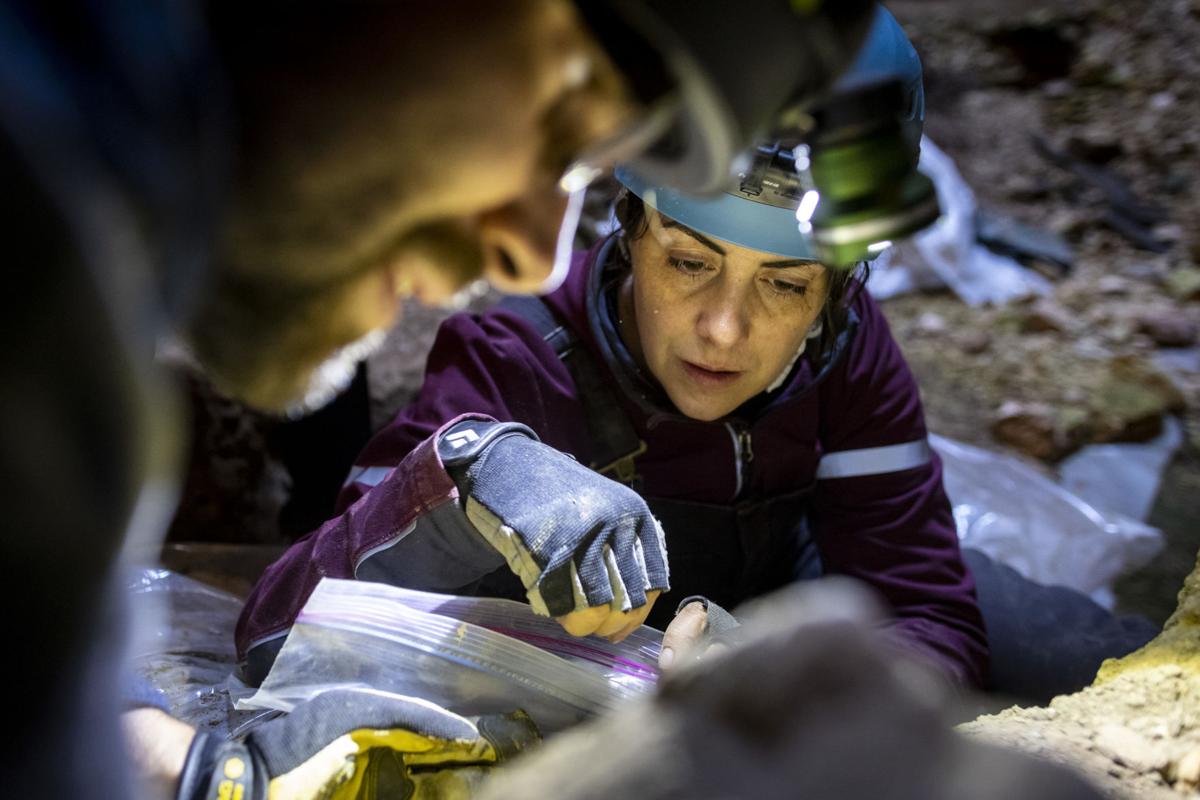 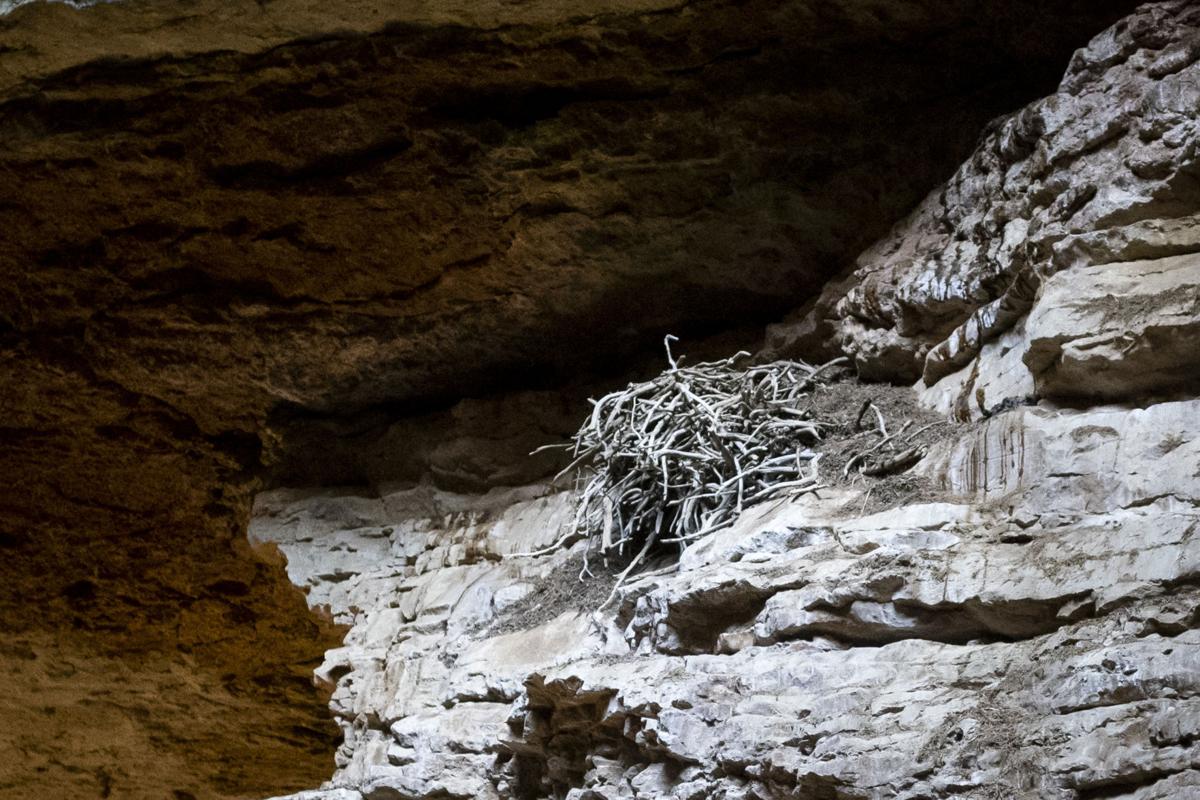 A pack rat nest, also called a midden, rests on a ledge near the entrance to Natural Trap Cave. 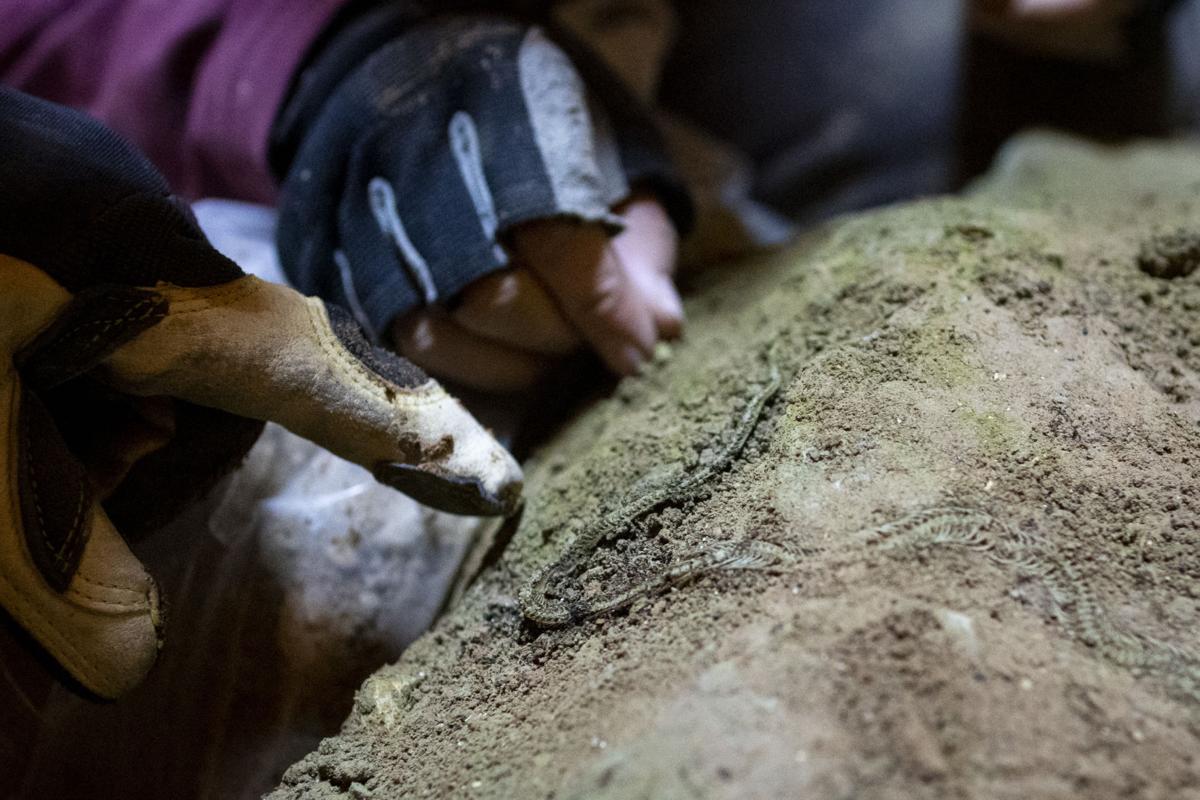 The remains of a modern snake in Natural Trap Cave. 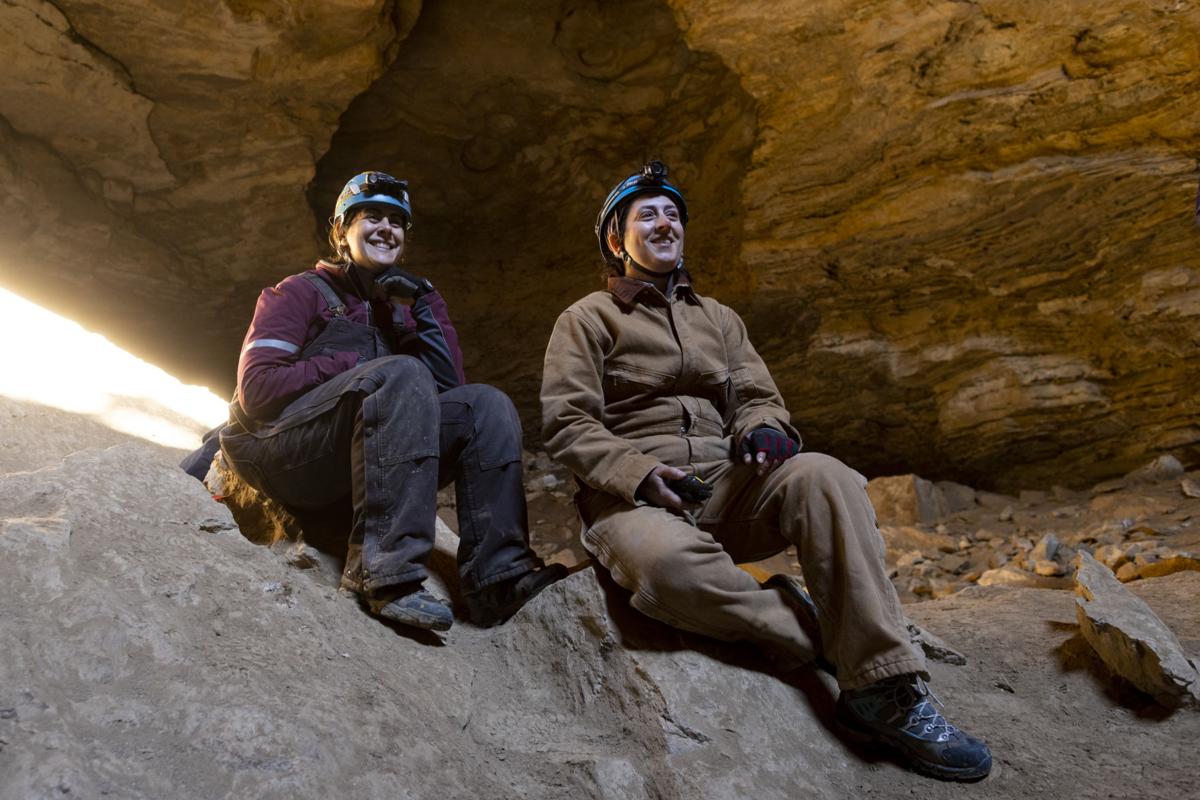 Jenny McGuire, left, and Julie Meachen relax while waiting their turn to ascend to the surface in Natural Trap Cave on July 8.