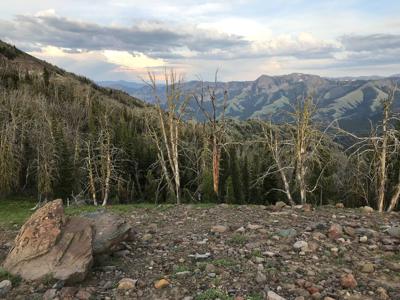 This story is part of the Lee Enterprises series "Grizzlies and Us." The project examines the many issues surrounding the uneasy coexistence of grizzly bears and humans in the Lower 48, which have come more into focus in recent years as the federally-protected animal pushes farther into human-occupied areas. The 10-part series, comprised of more than 20 stories, was produced by reporters and photojournalists across the Rocky Mountain West.

It was an unusual sight, about eight years ago, when 17 grizzly bears grazed on wild caraway plants in a field not far from Malou Anderson-Ramirez’s ranch home.

“When I was a child I only saw one grizzly bear my whole time being out with the sheep,” she said.

The increase in grizzly activity has prompted new technology that may rattle old ranching traditions.

Since they were placed under federal Endangered Species Act protection in 1975, grizzly bears have been mostly a Yellowstone National Park feature in southwest Montana.

That changed about 10 years ago, coinciding with when large die-offs of whitebark pine trees were being recorded. Blister rust and pine beetles were killing the long-lived trees that grow at high elevations. The trees’ seeds have long provided a high-protein food source for grizzly bears in the fall. Being an adaptable species, capable of dining on a variety of foods, the grizzlies sought out other sources of nourishment and started showing up in Tom Miner Basin.

The basin is located about 30 miles south of Livingston at the base of the Gallatin Mountains and just north of Yellowstone National Park. Wild country surrounds the high meadows and grasslands Anderson-Ramirez’s family has ranched since her grandparents bought property there in the 1950s.

So many bears feeding in one place is unusual in the Greater Yellowstone Ecosystem, with the exception of high elevation talus slopes where some grizzlies congregate to feed on cutworm moths.

Kerry Gunther, Yellowstone National Park’s lead bear biologist, said seeing a dozen bears on a rocky slope was the most unique grizzly interaction he’s had in his 39 years working in the park.

“Seeing that many bears that close together with no conflicts, they had a hierarchy worked out,” he said.

Likewise, the bears feeding in Tom Miner Basin seemed willing to share and be close to each other when feeding, defying human conceptions of the animals as solitary and defensive when it comes to food sources.

“There are quite a few sows with cubs that live up here or come through here,” Anderson-Ramirez said. “It’s just kind of a nice place to raise young.”

That’s something she can relate to, raising two daughters with her husband, Andres, on the family ranch. In describing herself, Anderson-Ramirez said she is “a mother first and foremost,” in addition to being a rancher, business owner and community supporter.

“I would say that it’s a gift to be able to be here and to raise children in such a wild place,” she said. “And it’s a good lesson in tolerance and understanding. We can learn a lot from the bears and other wildlife around the evolution of change and being able to be adaptable.”

For her family and the cattle they raise, that has meant traveling across the landscape in a consistent and predictable pattern so wildlife adapt to their rhythms. That may mean moving irrigation pipes at the same time on the same days, or keeping cows out of densely wooded coulees and draws in the fall when bears are seeking berries or other foods to fatten up before winter. It also requires removing attractants from the landscape, like salt or molasses blocks provided as livestock supplements.

Anderson-Ramirez’s sister started a range rider program to check on cattle and keep predators at bay. They also can quickly identify predator-killed livestock to document for reimbursement under the state’s livestock loss program, as well as remove the carcasses to ensure predators don’t camp out at the site. Camera traps have taught them wildlife migratory paths through the area, as well as den sites, so they can alter where they graze livestock to avoid conflicts.

“There’s a humility that comes with living in places like this where one really has to understand when a feeling isn’t quite right,” she said. “I’ve learned to really follow my gut. When I don’t have a good feeling about something I don’t push the envelope.”

She compared it to a surfer assessing the ocean and deciding not to ride when conditions seem dangerous.

Anderson-Ramirez is being proactive in another way, co-founding a technology company designed to help ranchers track cattle and monitor them from afar.

Called TEAL – which stands for Technology, Education, Agriculture and Landscape – the goal is to create a cost-effective tracer for livestock. Using cellphone technology, ranchers could monitor cattle by receiving a signal if there’s a mortality, or even if the cow’s heart rate increased rapidly during a confrontation with a predator. The tags could also be used for geo-fencing, creating invisible fences to contain cattle to certain allotments, somewhat similar to an invisible dog fence.

Prototypes of the tags are still being tested, and it may be three years before they are ready to market at a projected cost of $5 to $15 each, she said.

“The end result is to have a simple tool for producers to use to better manage their livestock in wild places,” Anderson-Ramirez said.

Once developed, encouraging ranchers to try TEAL tags will be the next hurdle she will have to overcome. That could be a tough sell to a ranchers who have been stereotyped as self-reliant.

“We are a sentimental and loyal group of people that are nostalgic and sentimental to our old value systems,” Anderson-Ramirez said. “But with the regenerative movement and looking more at the importance of profitability on ranches and keeping large landscapes intact … I think that’s helping to change the language and the narrative around how important it is to diversify, to be open to change, to be adaptable.

“The important thing is … honoring our struggle, everyone’s struggles, including the wildlife and the bears and the badgers and the people,” she said. “I really think that’s what coexistence is for me. Just honoring the struggle that we all have as we try to live and conserve and protect these wild places.” 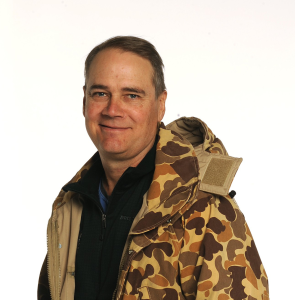 Outdoors editor for the Billings Gazette. 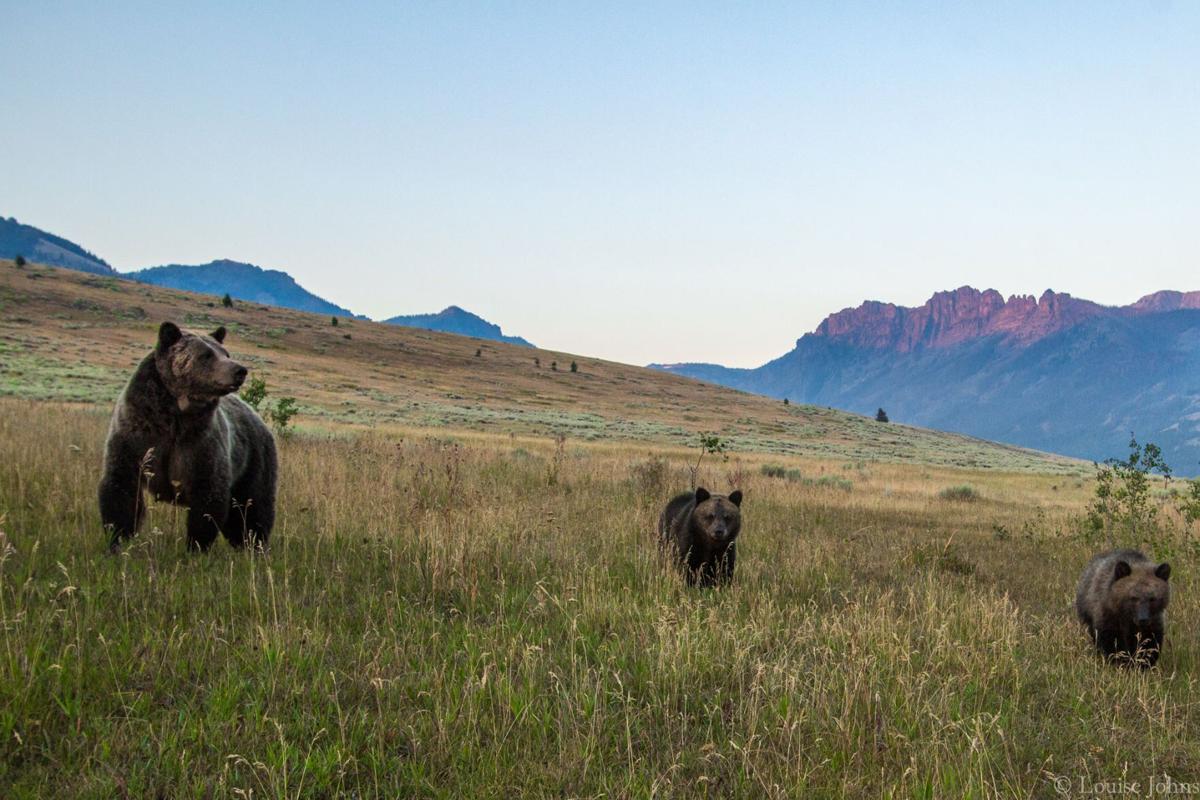 Tom Miner Basin is home to one of the most dense grizzly bear populations in North America. Wolves, elk, mountain lions, moose and other iconic species also live there. A sow grizzly and her cubs pass through private land on the Anderson Ranch in the basin. Due to a remarkable recovery of grizzly bears, they have increased dramatically over the last five years, posing significant challenges to ranchers. 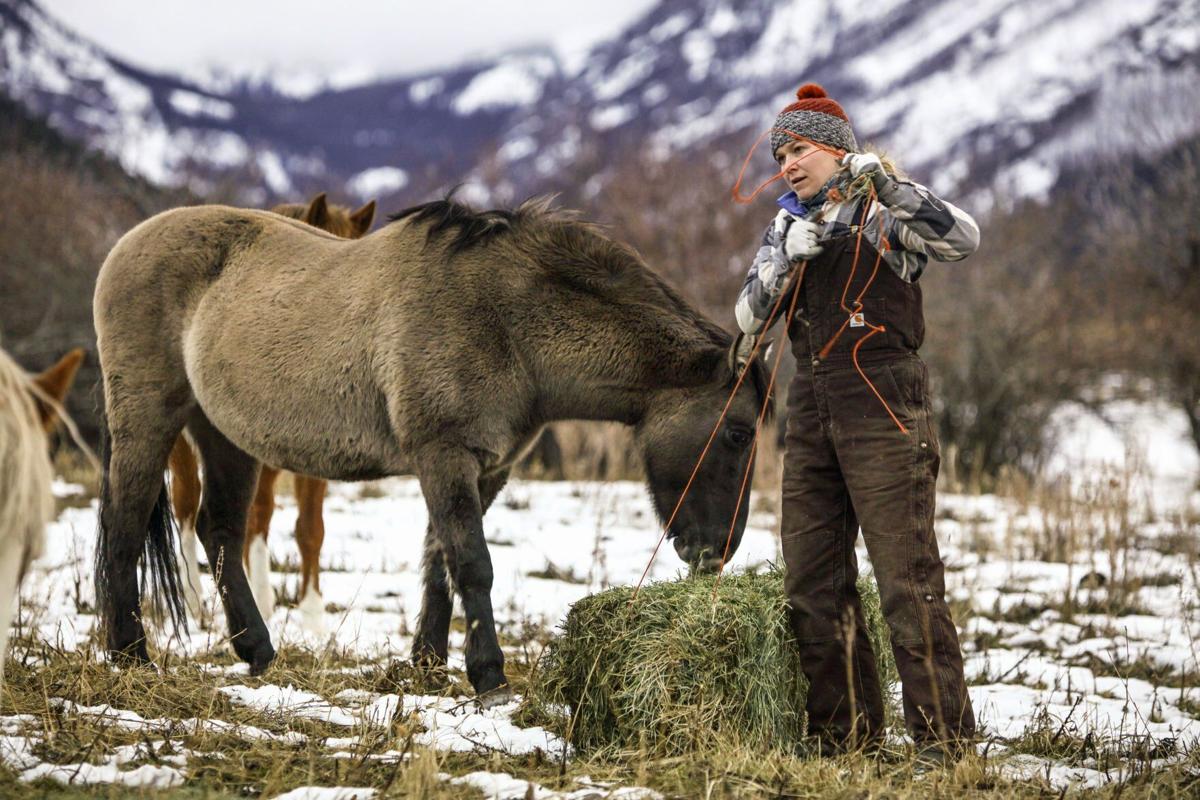 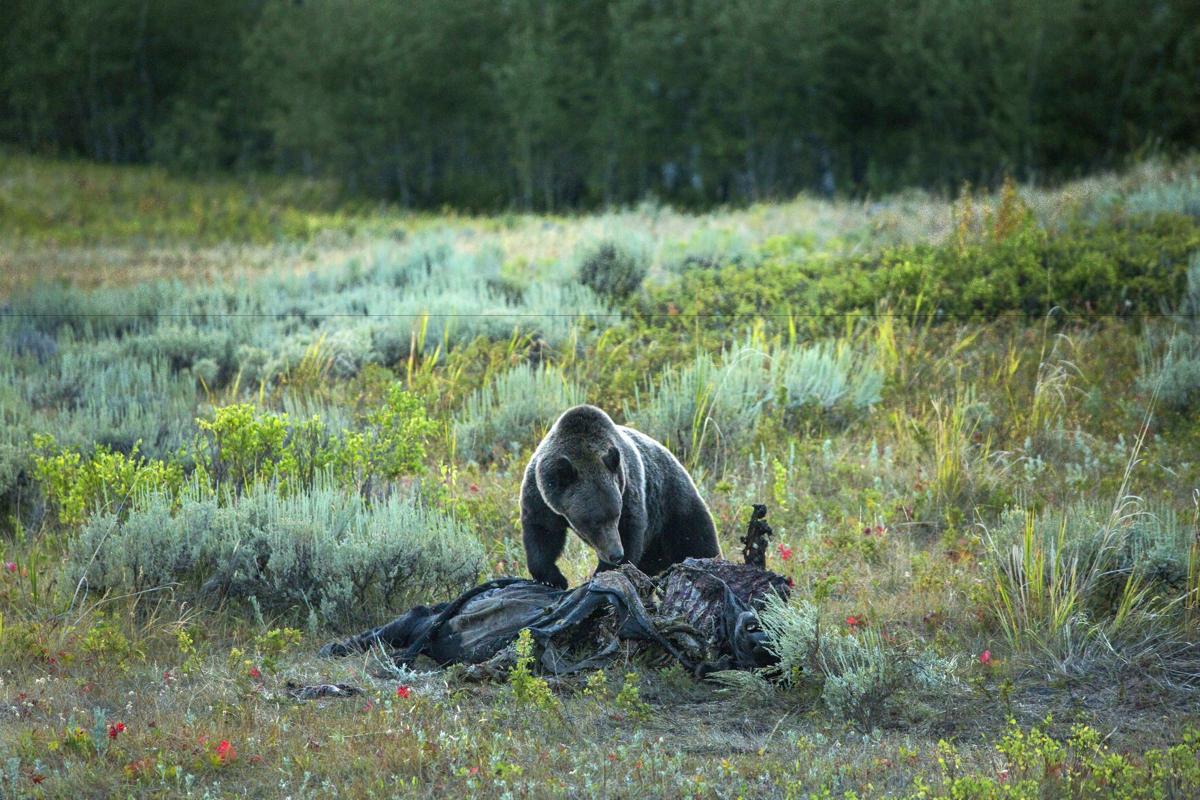 A grizzly bear feeds on the remains of the carcass found by range riders in Tom Miner Basin and confirmed as a grizzly bear kill in early August 2016. The carcass was disposed of far from cattle and human travel to keep from luring predators into the area. 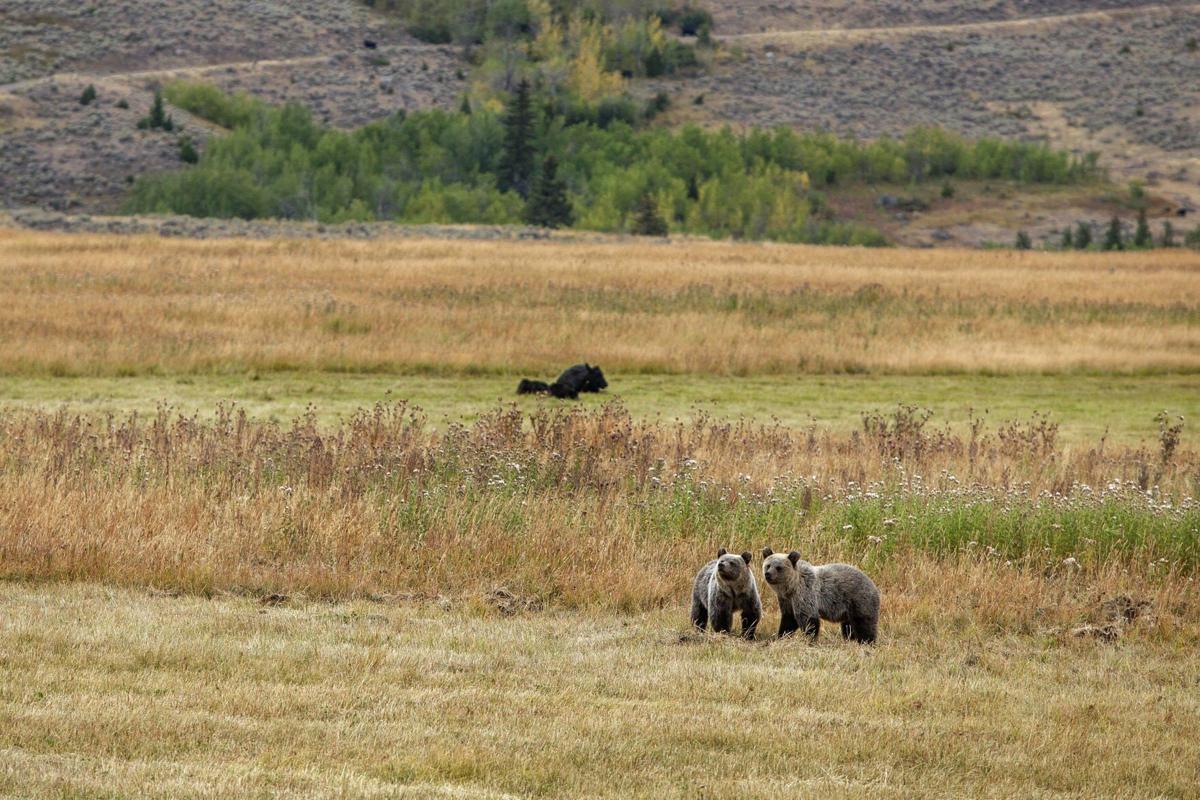 Two grizzly bear cubs dig for caraway root in a cattle pasture in Tom Miner Basin as cattle graze behind them. 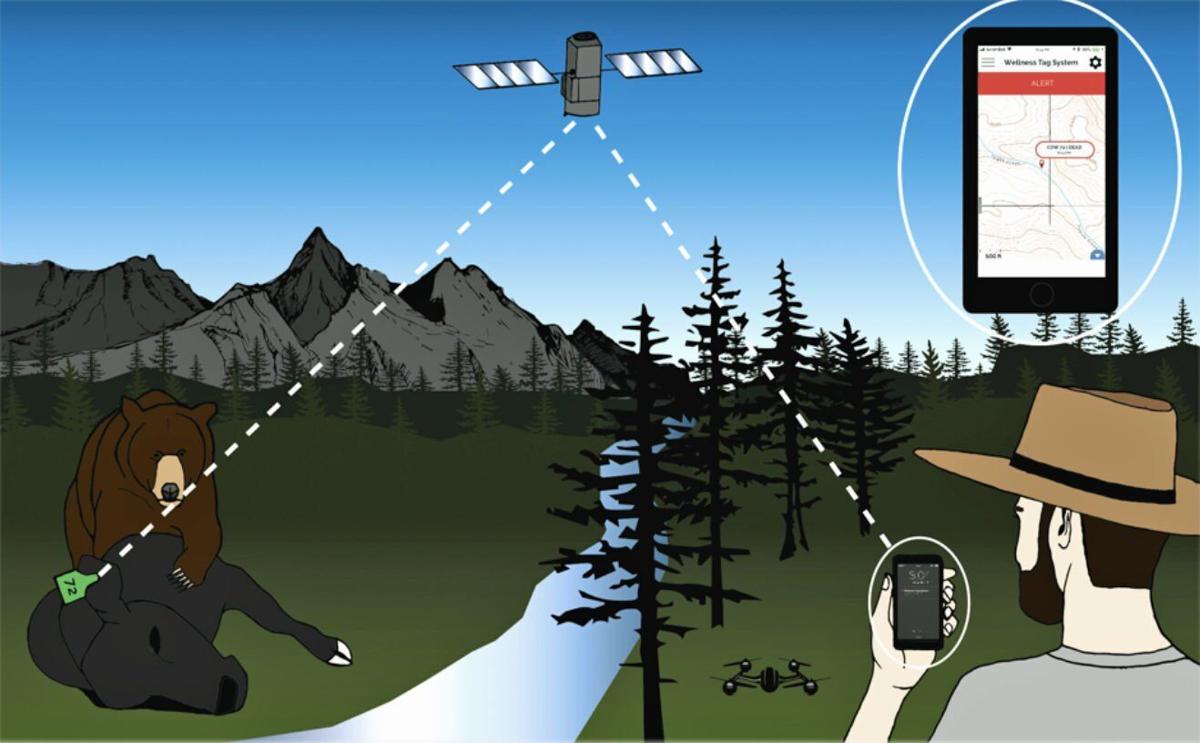 TEAL tags are a newly developing technology that would help ranchers monitor livestock from afar.