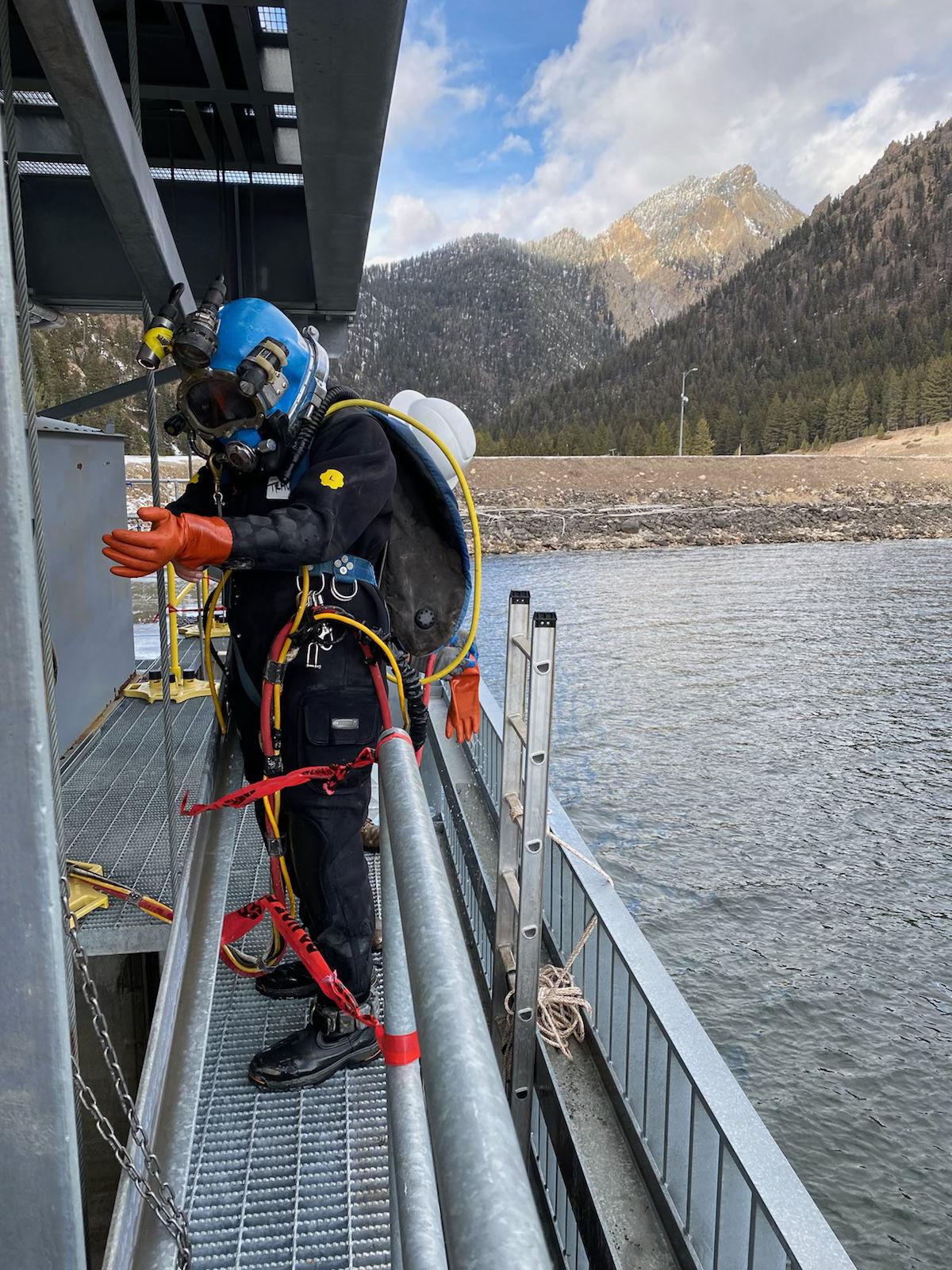 Travis Wilson, a diver from Associated Underwater Services, preps to go into the river to look at the component that failed on Hebgen Dam. 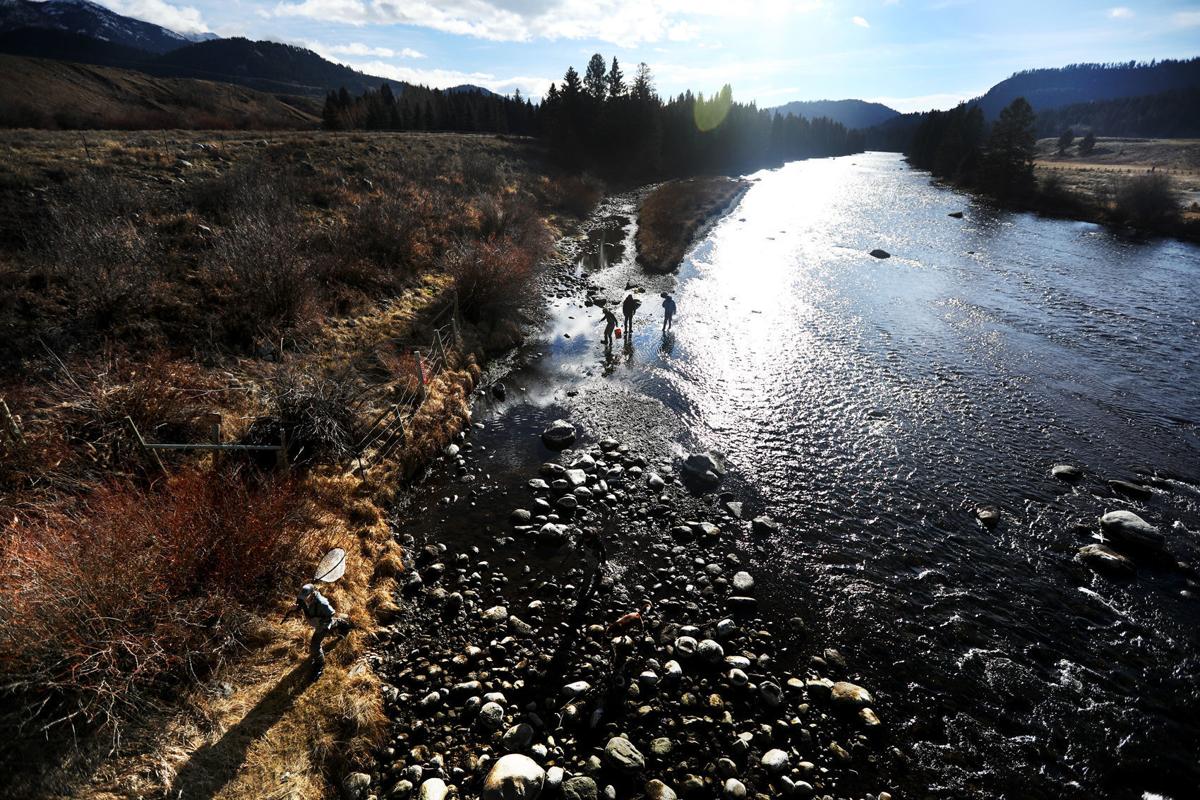 In this file photo, volunteers search for fish in a pool along the Madison River after a gate malfunction at Hebgen Lake Dam cut off water to the river. 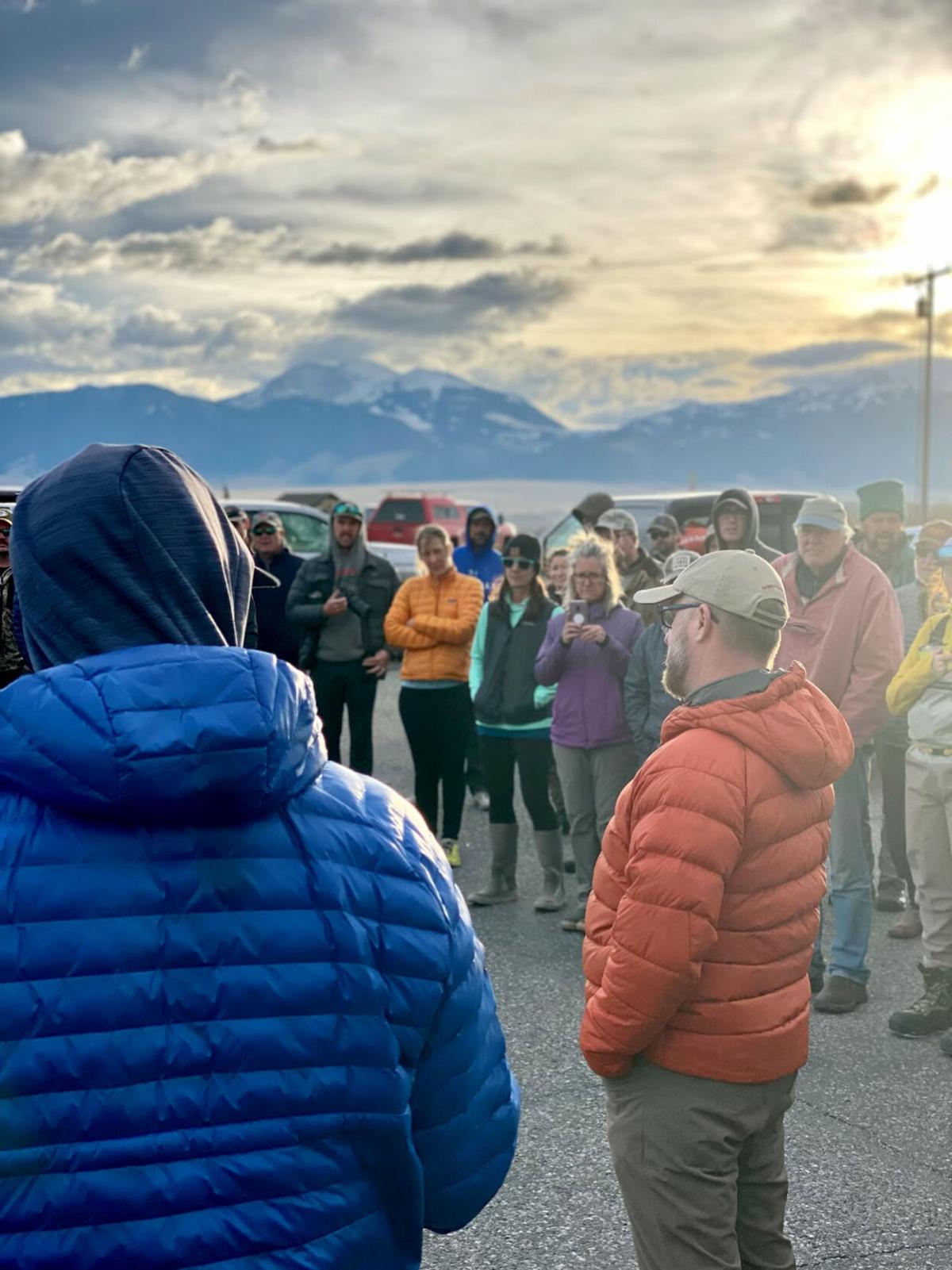 Just before midnight Wednesday a replacement part was installed on a broken spillway gate on the Hebgen Lake Dam and flows to the Madison River downstream were quickly boosted.

NorthWestern Energy announced the successful repair on its social media. The U.S. Geological Survey hydrograph showed the water rising as steeply as it had dropped two days earlier, climbing back to 640 cubic feet per second from about 248 cfs.

“The crews were nothing short of elated when the gate was able to be opened and flow restored to the river as the culmination of all their efforts and teamwork,” said Jeremy Clotfelter, NorthWestern Energy director of hydro operations, in an email.

The accidental drawdown was the result of a broken shaft on the spillway gate. A new shaft was made by Anaconda Foundry Fabrication Co. workers following an all-night shift, trucked to the site and installed by divers and company crews working into late Wednesday night.

“From the time this issue was identified, work was underway without stoppage until the river flows were restored,” Clotfelter said. “Additionally, the repair was completed safely and without requiring any further flow reduction in the river.”

Clotfelter said installation of the new part, while “feeling slow at times,” went well as “it was essential for them to work purposefully and complete the repair correctly the first time.”

He added NorthWestern would now focus on what caused the part to break and how to establish “corrective actions that would prevent a similar failure in the future.”

One problem to be resolved is how the drawdown occurred without company officials being alerted more quickly to the problem. Instead, an angler saw the dewatered river and, when unable to reach NorthWestern employees, called Montana Fish, Wildlife & Parks officials who contacted the company.

In the wake of the accident, the company’s fisheries experts will be working with FWP to study any impacts to the river, its fish, bugs and plant life.

“NorthWestern has a FERC approved five-year fisheries plan which describes, at a high level, the focus area and activities NorthWestern Energy and partnering resource agencies will undertake,” said Andy Welch, manager of hydro license compliance for the company.

NorthWestern is required to file a report on the incident with FERC, the Federal Energy Regulatory Commission, within 14 days which will be reviewed as part of the oversight process.

Travis Horton, Region 3 fisheries manager for the Montana Department of Fish, Wildlife & Parks, said the dewatering was isolated to the upper river and short term enough that the fishery should not be significantly impacted.

“We got fairly lucky,” he said.

Although some fish were stranded and died, many others were able to escape to pools. Another concern was brown trout spawning beds, called redds, that may have been dewatered killing eggs that were laid this fall.

“Not all spawning is in the main river,” Horton noted.

He also said that even without such a catastrophic occurrence, there is annually a natural mortality rate of about 30% to 40% for young fish. The number of fish killed is unknown and difficult to calculate since dead fish sink or are picked up by scavengers.

However, when there are fewer fish in the river, that means less competition for food to survive, Horton said.

“Given that resiliency, we’ll probably be in good shape,” he added.

FWP biologists will be discussing what steps to take next to evaluate the effects of the dewatering event in addition to annual fish sampling that occurs in the spring and fall. Brown trout populations were already declining on the Madison, along with other streams in southwestern Montana, puzzling state fisheries biologists.

Until then, FWP was working to reverse an emergency fishing closure on the river by midnight Thursday, according to Eileen Ryce, FWP fisheries program manager.

Although an unusual event, this is not the first time the Madison River has been so dramatically dewatered. The 1959 Hebgen Lake earthquake created a natural dam that blocked downstream flows for weeks. In a published review of the quake, scientist Frank Stermitz wrote, “The abundance of spring inflow to the Madison River a few hundred yards downstream from the slide, however, kept the river alive.” Flows into Ennis Lake, downstream, were estimated at 530 cfs.

Kelly Galloup, owner of the Slide Inn fly fishing shop, lives not far from where the 1959 slide occurred as well as close to the two-mile stretch of river that saw the greatest impact from the Tuesday morning dam failure. He said fishing pressure is low at this time of the year, so he’s not worried about any immediate financial effects.

“It’s pretty much back to normal right now,” he said.

Had the low water stretched out for another five days, he predicted the harm to the fishery could have been “catastrophic.”

An estimated 200 volunteers showed up on Wednesday to help move fish trapped in isolated pools back into the main river, raising Galloup’s spirits. He also received calls from as far away as South Dakota from anglers offering to drive to the Madison to help out. One volunteer estimated rescuing 200 to 300 fish.

“Talk about something that made your heart feel good,” Galloup said.

“All the scary stuff is over now.”

“It’s pretty amazing to see that camaraderie and care for our river,” she said.

The one upside to the scare is that it reinforced the importance of the Madison River to the region, Gentry added.

“That river is the lifeblood of this community. Not only for fishing businesses, but for ranching, hunting and migratory birds. Everything needs water.”

Photos: A race to rescue the Madison River

A replacement part has been manufactured and could be installed at Hebgen Lake Dam by this evening to restore water to the Madison River.

Three conservation groups says new fishing rules that take effect Jan. 1 on the Madison River should not be repealed.

Although the failure of a specialized dam part resulted in significant dewatering of an upper Madison River below Hebgen Lake Dam on Nov. 30, …

Creation of an ambassador corps is being considered to help defuse anxiety and tension at Madison River boat ramps.

Travis Wilson, a diver from Associated Underwater Services, preps to go into the river to look at the component that failed on Hebgen Dam. 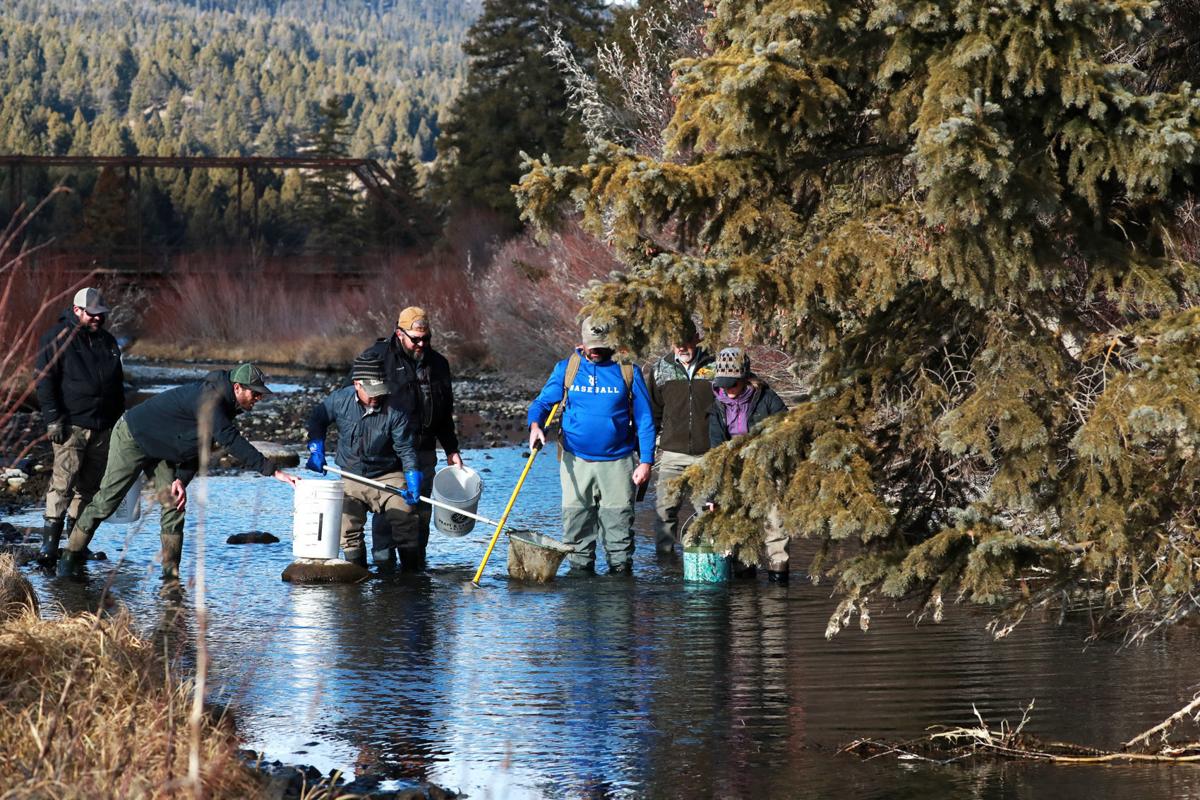 Volunteers wade through a channel of the Madison River on Wednesday morning with a Fish, Wildlife & Parks biologist as they work to save trapped fish in sections that have been cut off from the main river flow. The river began to dry up after a malfunction occurred at a gate on the dam at Hebgen Lake.

In this file photo, volunteers search for fish in a pool along the Madison River after a gate malfunction at Hebgen Lake Dam cut off water to the river. 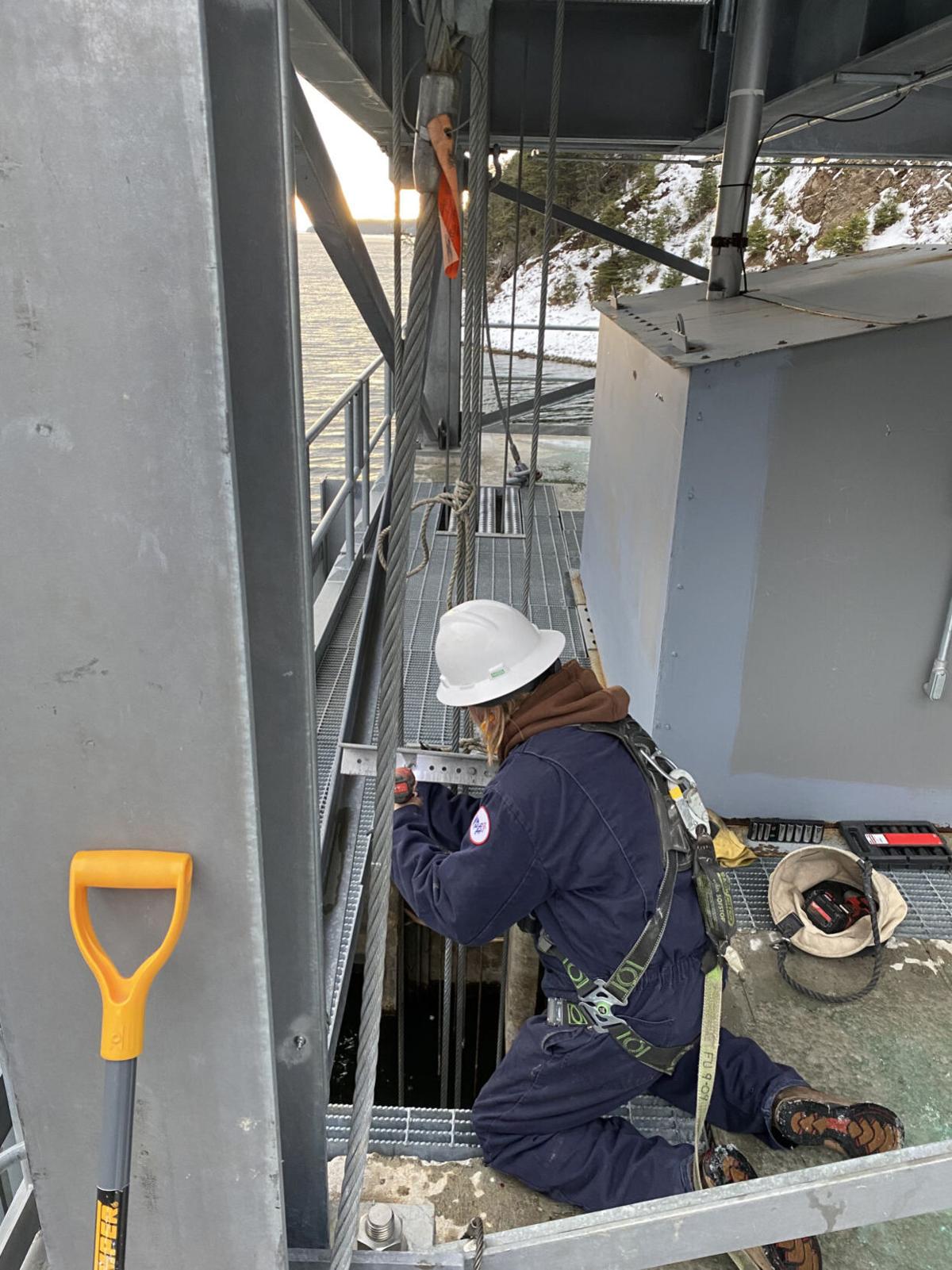 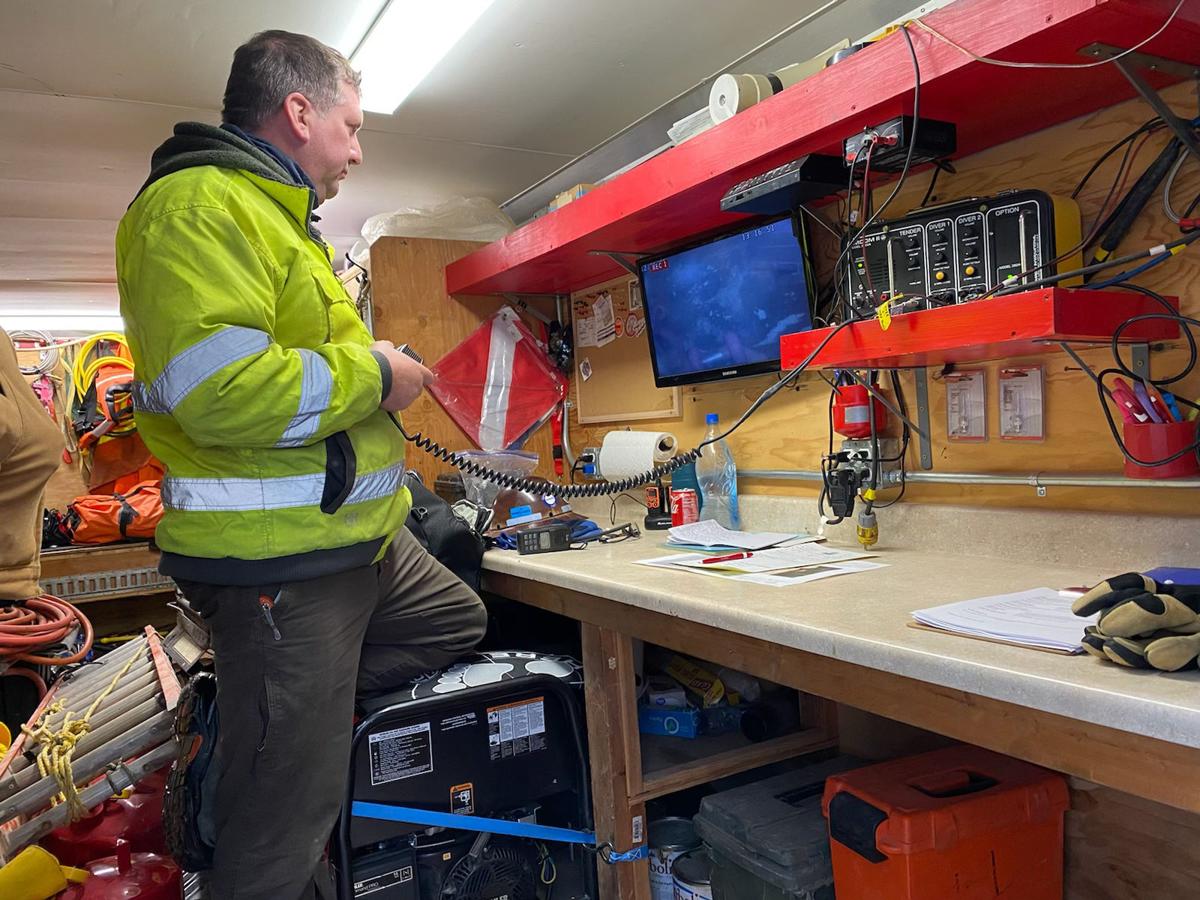 Chris Calero from Associated Underwater Services watches the diver as he works underwater on the dam. 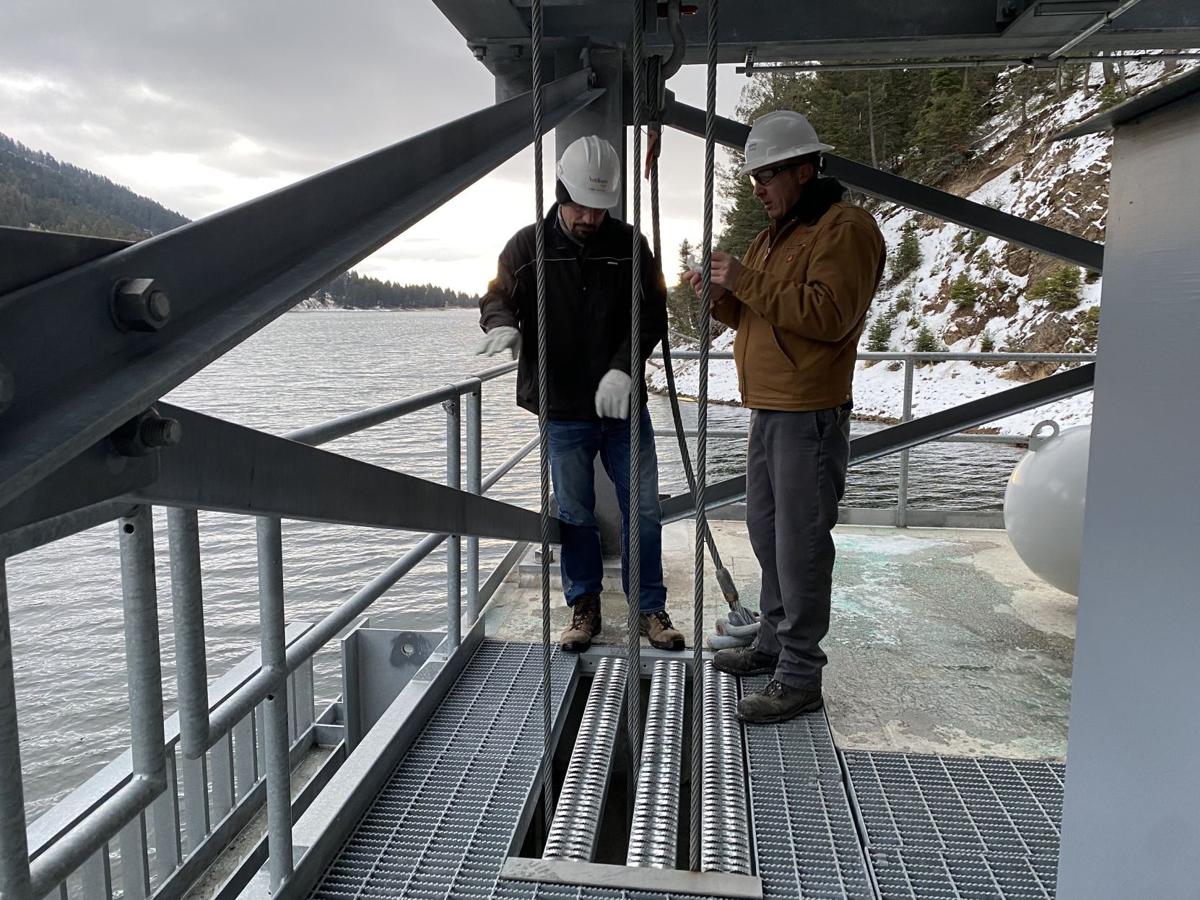 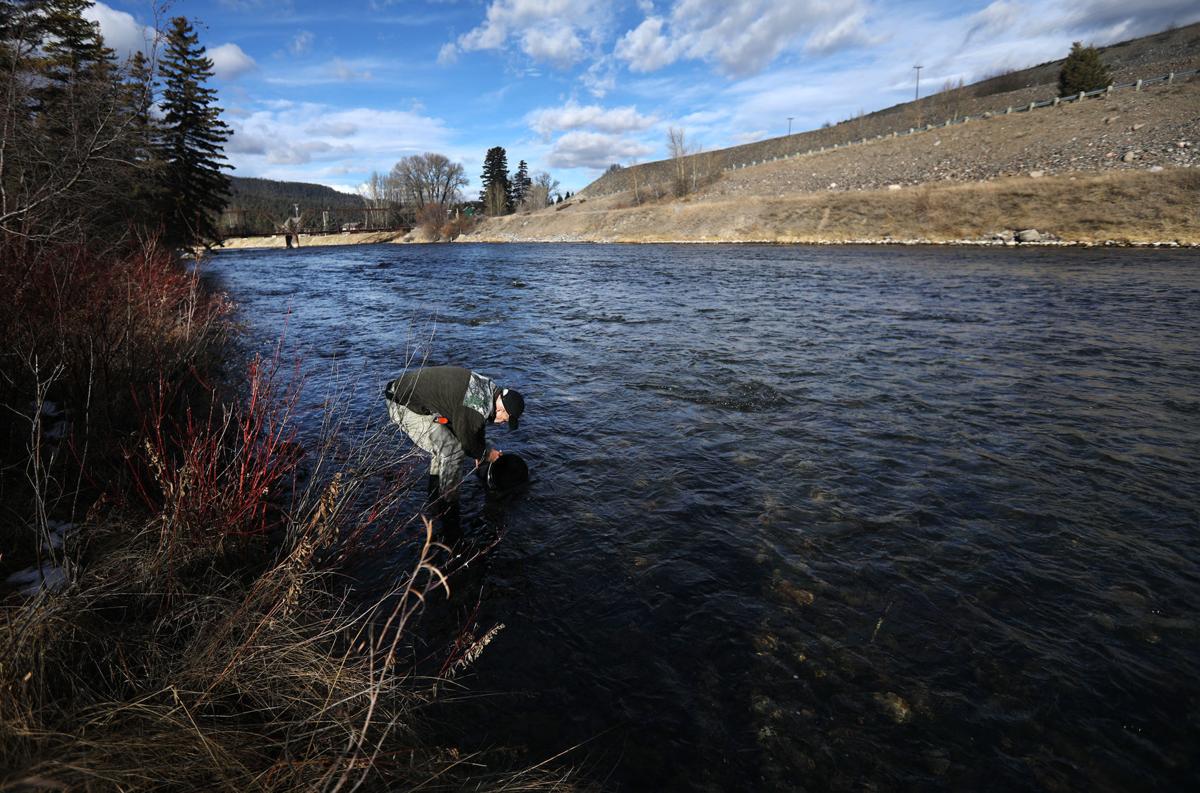 Casey Johnston, a volunteer from Divide, slowly releases a bucket full of trout as he and dozens of others work to save trapped fish in sections of the Madison River that have been cut off from the main river flow. The river began to dry up after a malfunction occurred at a gate on Hebgen Lake Dam. 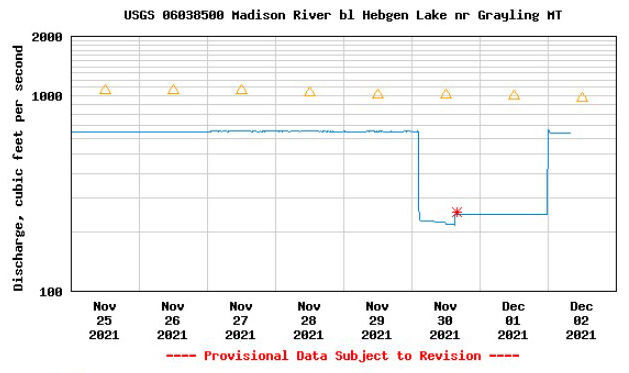