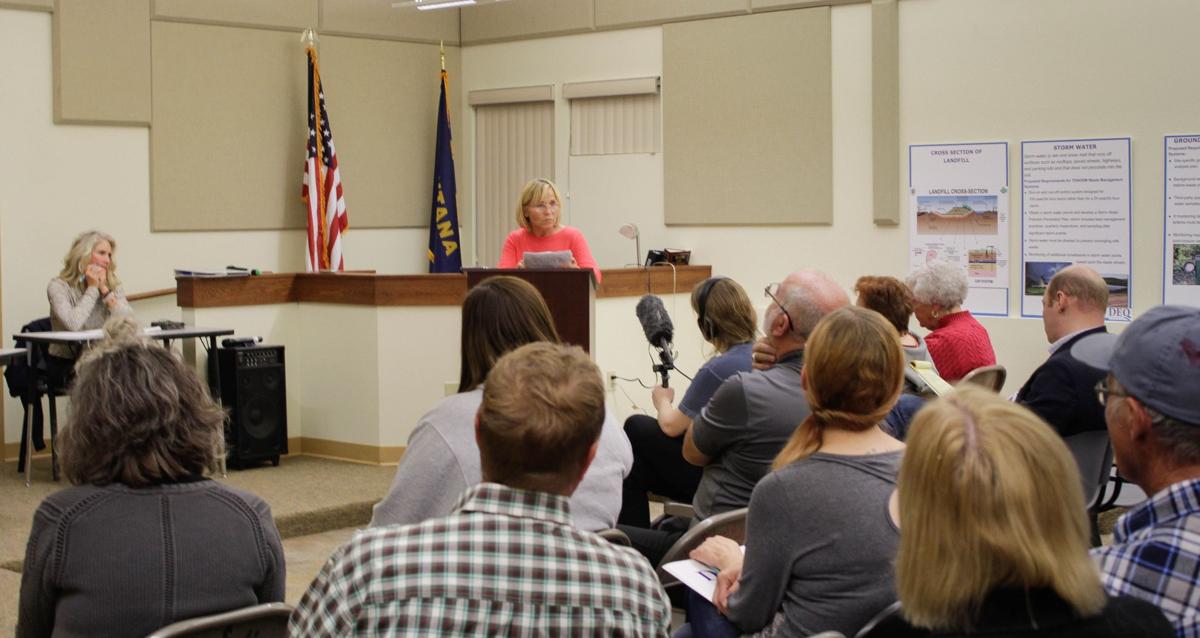 Laurel Clawson speaks during a DEQ public forum, on proposed rules for dumping radioactive waste in Montana, on Wednesday evening in Glendive. Clawson is a Plentywood-area rancher and member of the Northern Plains Resource Council. 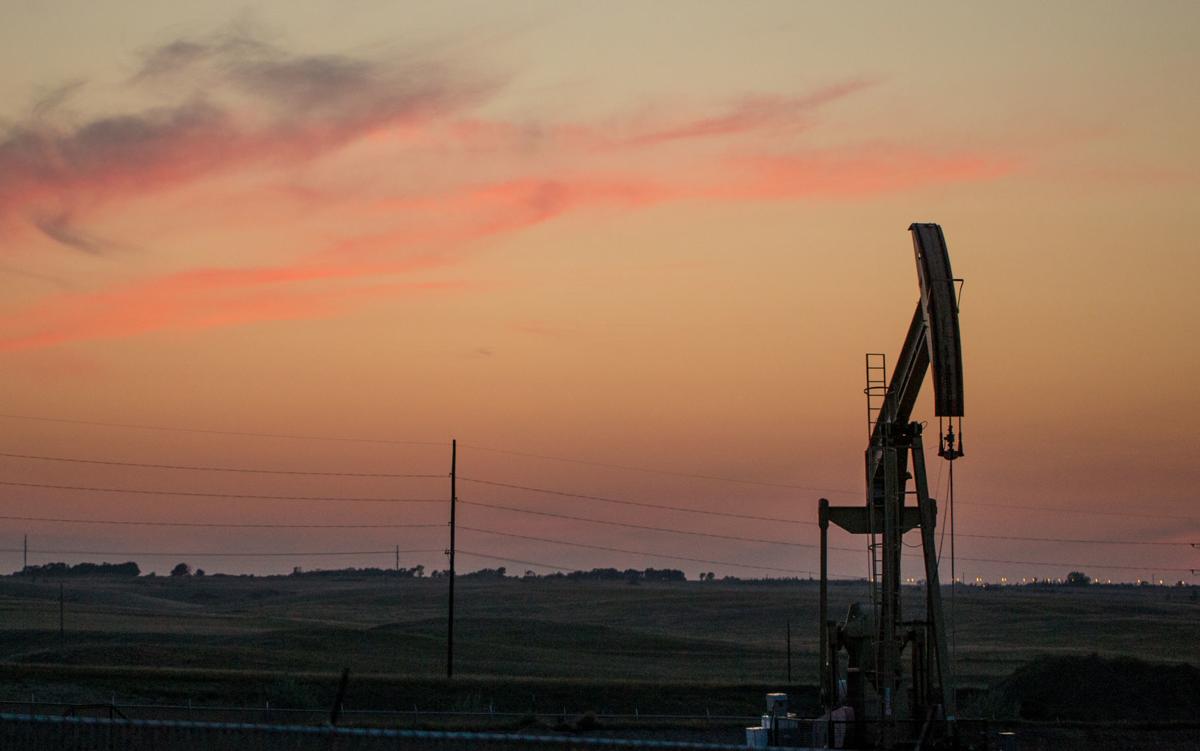 An oil jack extracts crude from the Bakken oil field outside of Williston, North Dakota. 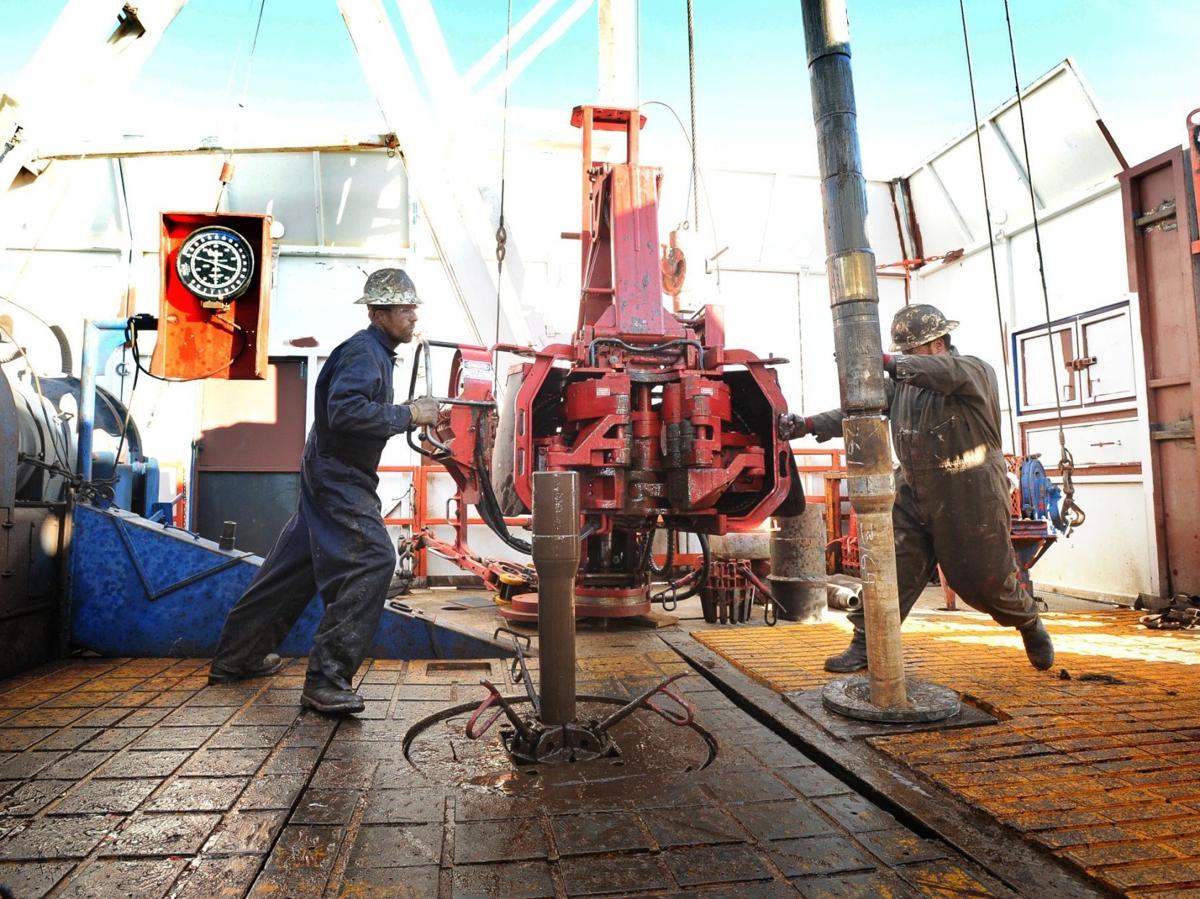 Oil rig workers change pipe on a Bakken rig for Continental Resources on a drilling site between Sidney and Culbertson. 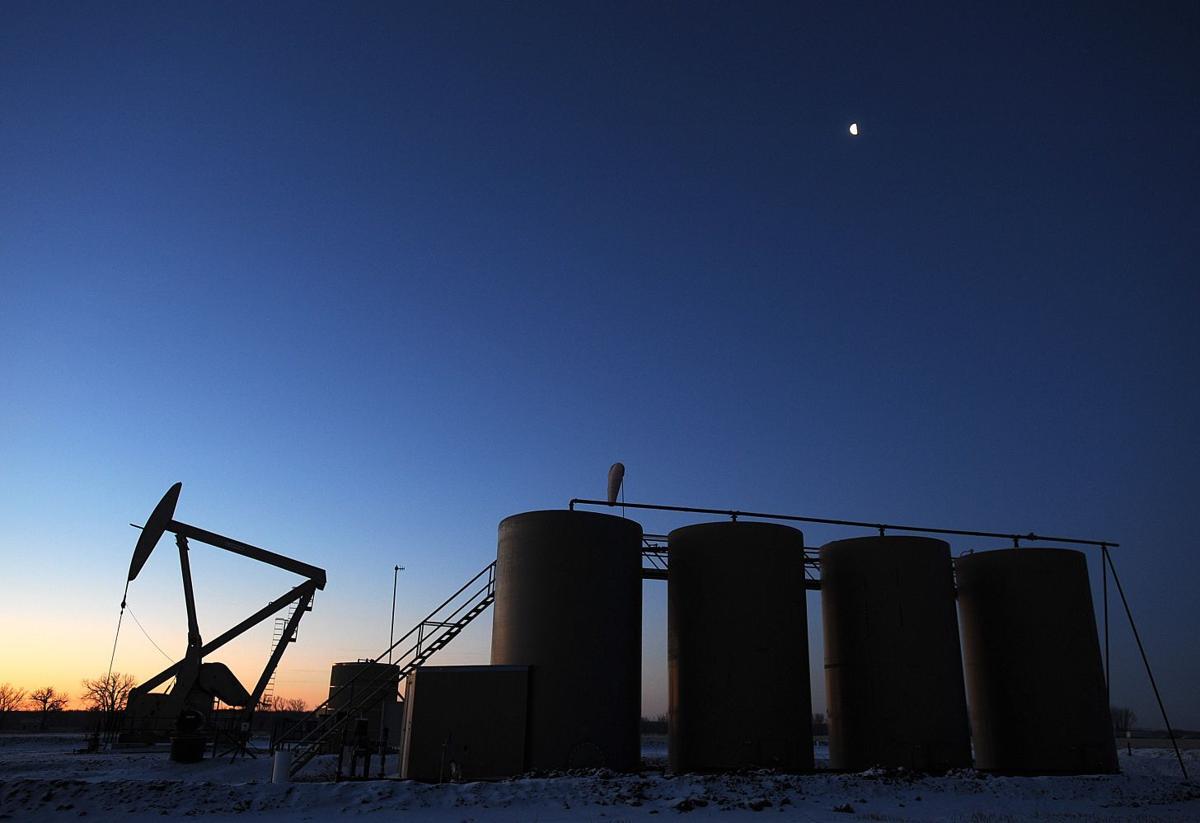 An oil well in the Bakken oil field boom in the Williston, N.D. area. 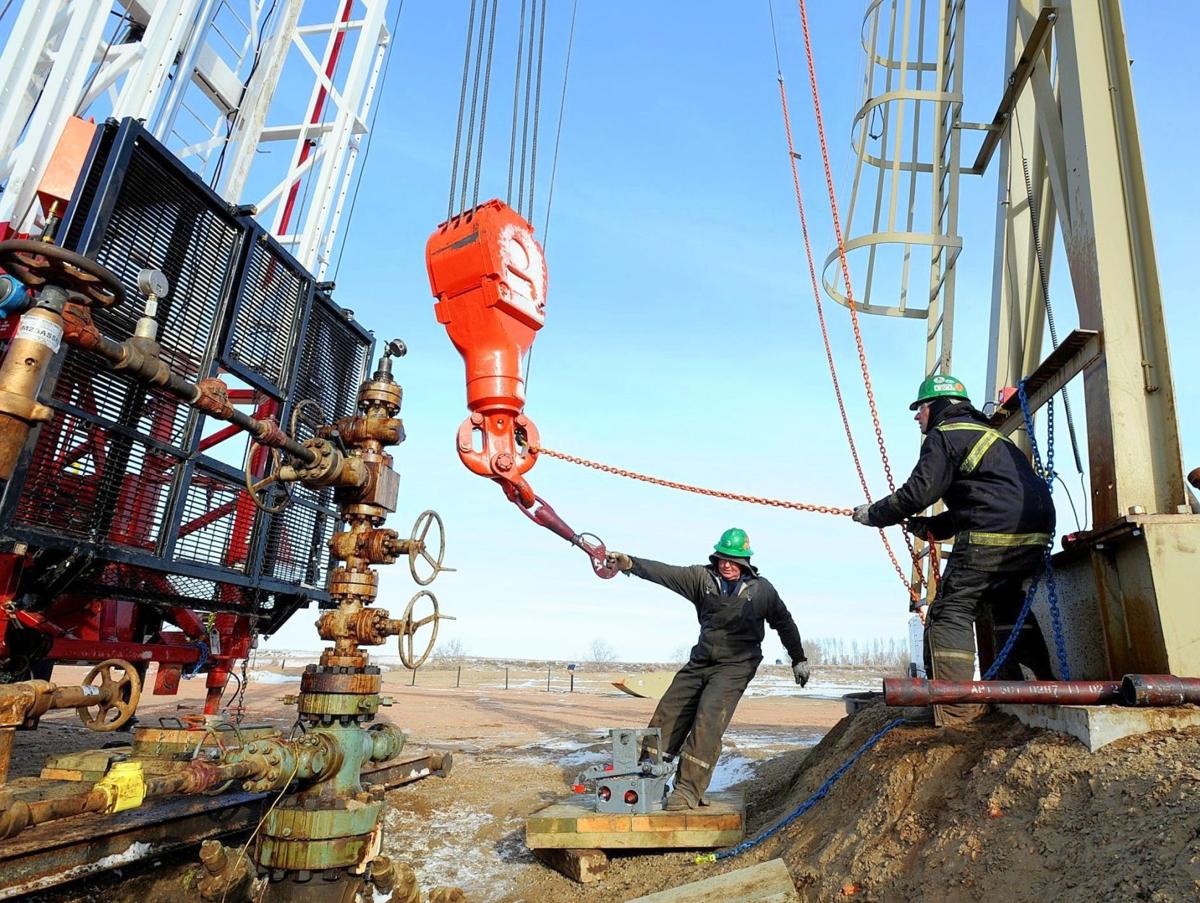 The crew of an MBI Energy Services workover rig finishes a new oil well near Fairview, Montana on February 22, 2013. 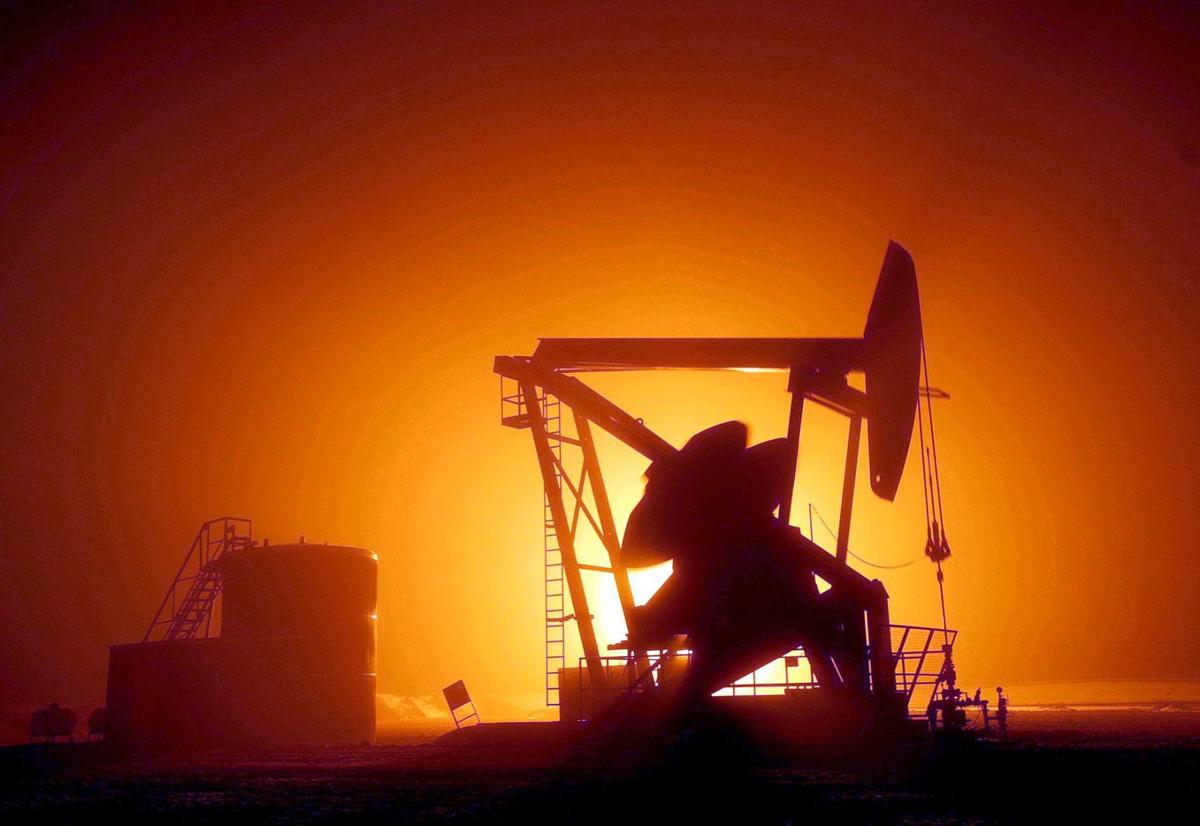 Despite a steep decline in oil prices and drilling activity, oil production from the Bakken has experienced only a slight decline, experts say.

Laurel Clawson speaks during a DEQ public forum, on proposed rules for dumping radioactive waste in Montana, on Wednesday evening in Glendive. Clawson is a Plentywood-area rancher and member of the Northern Plains Resource Council.

An oil jack extracts crude from the Bakken oil field outside of Williston, North Dakota.

Oil rig workers change pipe on a Bakken rig for Continental Resources on a drilling site between Sidney and Culbertson.

An oil well in the Bakken oil field boom in the Williston, N.D. area.

The crew of an MBI Energy Services workover rig finishes a new oil well near Fairview, Montana on February 22, 2013.

Despite a steep decline in oil prices and drilling activity, oil production from the Bakken has experienced only a slight decline, experts say.

GLENDIVE - June Peterson’s Eastern Montana ranch is divided by a country road that’s used to transport Bakken oilfield waste to a nearby landfill. Nearly daily, Peterson sees trucks go to and from the only Montanan facility that can accept the radioactive waste.

"(Our ranch) is much more than a place of business. It's very precious and irreplaceable to us," she said, during a testimony before the Montana Department of Environmental Quality on Tuesday in Glendive.

Peterson said the ranch her grandfather homesteaded along the Sevenmile Creek would be spoiled by pollutants, dust from trucks, and runoff from the Oaks Disposal Services landfill about 25 miles from Glendive.

She questioned why Montana would propose less stringent rules, including accepting higher levels of radioactive waste, than neighboring North Dakota, a state largely responsible for generating the waste. Her testimony mirrored many of the about 70 people who attended an emotionally charged DEQ hearing on the latest draft of proposed regulations on radioactive waste in Montana.

The rule, proposed in late August, would regulate TENORM — technologically enhanced naturally occurring radioactive material — which typically comes to Montana from North Dakota oilfields in the form of drill cuttings or filter socks.

Unlike NORM —naturally occurring radioactive material —TENORM could pose a threat to human health if ingested or inhaled, according to DEQ.

The draft for the disposal of TENORM has been in the works for two years, and would be the first statewide regulation. TENORM is not federally regulated.

Currently, regulations are addressed in a case-by-case basis when licensing facilities, combined with existing laws for solid waste disposal and landfills. Oaks Disposal Services, about 20 miles from Glendive, is currently the only facility that accepts this type of waste in Montana.

Under current licensure, Oaks can accept up to 50 picocuries per gram of radium-226 and -228 during a single load. Picocuries per gram, pCi/g, is the most common unit of measurement for TENORM.

Under the new proposal, Oaks could accept up to 200 picocuries during a single load of waste, but must maintain an average annual concentration of waste of 50 picocuries within the facility, according to the proposal.

Under the new proposal, facilities would self-report each intake, find the average of 50 picocuries that would be reported quarterly to DEQ, along with DEQ inspections, said Ed Thamke, waste and underground tank management bureau chief.

Only one of 14 people who testified did not question the proposed increase that a facility could take in. Alan Olson, executive director of the Montana Petroleum Association, called the public's response mostly "emotional and somewhat fear-based," during his testimony. Olson was the only person who did not receive applause after his testimony.

Olson pointed out that several other states, including Utah and Colorado, accept much higher levels than Montana. He also echoed a DEQ fact sheet that compares TENORM levels to NORM levels. For example, coffee grounds has a NORM level of 27 picocuries, and phosphate fertilizer has a level of 123 picocuries, according to the DEQ.

Another concern with the current draft is that facilities would be responsible for self-reporting, and self-monitoring.

Thamke didn’t share the same concern. When asked if Oaks had failed to report yet, he said no.

“We know when they aren't," he said. "They have no incentive to do anything other than operate as their license enables them. Because if they don’t then they get into enforcement and have the possibility to get their license rescinded."

A new addition to the proposal says facilities would also be responsible for water testing by independent ground water scientists, on a semiannual basis. If groundwater and wells downstream of the site were found to have high concentrations above background radiation the site would have to take corrective action.

Seth Newton, who owns a ranch near Oaks and is also a member of Northern Plains, fears groundwater contamination and wants a requirement that storm water ponds be lined. He brought up a 2018 report — released in February — that showed there were higher levels of radioactive material in Oaks’ wells.

During a question-and-answer portion, Newton asked what had been done about a reported contamination of Oaks groundwater wells, found during a third-party report in November 2018.

In answering the question, Rick Thompson, solid waste section supervisor for the DEQ, said he wasn’t aware of the report, but that the DEQ would look into it—noting that no DEQ representatives with water quality control were present.

The water sampling report showed that Oaks had higher levels of radium-226 and -228, including higher levels of chloride concentrations, at two of Oaks’ wells and a nearby storm water pond in November 2018.

However, the report states the concentrations were highly variable over months, and didn’t suggest a sustained impairment of groundwater quality.

Speaking after the meeting, Thamke said he knew of the report that had been referenced. He said lining in the storm water ponds had since been installed, and that storm water catch basin had been made three times larger. The surrounding water, that had seen higher chloride concentrations, was already naturally attenuating, he said.

Still, landowners expressed concern they hadn’t been alerted to higher levels of radium in Oaks’ water.

“We need to be more communicative, and sensitive to concerns (so) it doesn’t end up where they don’t know what’s going on.” Thamke acknowledged.

Thamke said he's already planning on writing a written response to the report for public consumption.

One motivation behind increasing the amount receivable is to prevent illegal dumping, said Thompson.

North Dakota’s limit is 50 picocuries, but there is no facility in North Dakota that can accept TENORM, and illegal dumping has been common in both states.

A landfill near Williston is in the process of becoming the first facility to accept TENORM waste in state, according to the Bismarck Tribune.

When asked if Montana had the option of simply not accepting waste from North Dakota, Thompson bluntly said no.

But Dawson and Richland County residents at the hearing feared that having a higher limit than North Dakota would incentivize more waste being brought to Montana.

Montana’s rules should be the same as North Dakota, said June Peterson, during her public testimony.

“Anything less invites our neighbor to dump their hazardous waste in our home,” she added.

Speaking after the meeting, Thamke said he could appreciate the fine line between incentivizing more dumping of waste, and having a higher limit to mitigate illegal dumping.

“There is a dichotomy and I recognize that,” he said. “But what we’re proposing is reasonable… it makes sense environmentally.”

The proposal also outlines other regulations for TENORM, including  monitoring levels for workers and residents nearby the facility. And a new addition to the proposal is monitoring the facility boundary to make sure it doesn’t exceed a certain level of 100 millirem per year — a unit of measurement to find the amount of radiation deposited in human tissue.

Another public hearing is set for the Metcalf Building in Helena at 9 a.m. on Oct. 10.

The DEQ is accepting comment on the proposed rules through Oct. 21. The public can send written comments by mail to Sandy Scherer, Department of Environmental Quality, 1520 East Sixth, P.O Box 200901, or emailed to sscherer@mt.gov.

Montana considering increasing how much radioactive waste it accepts

Montana is considering quadrupling the amount of radioactive waste it can accept, according to a proposed rule change.