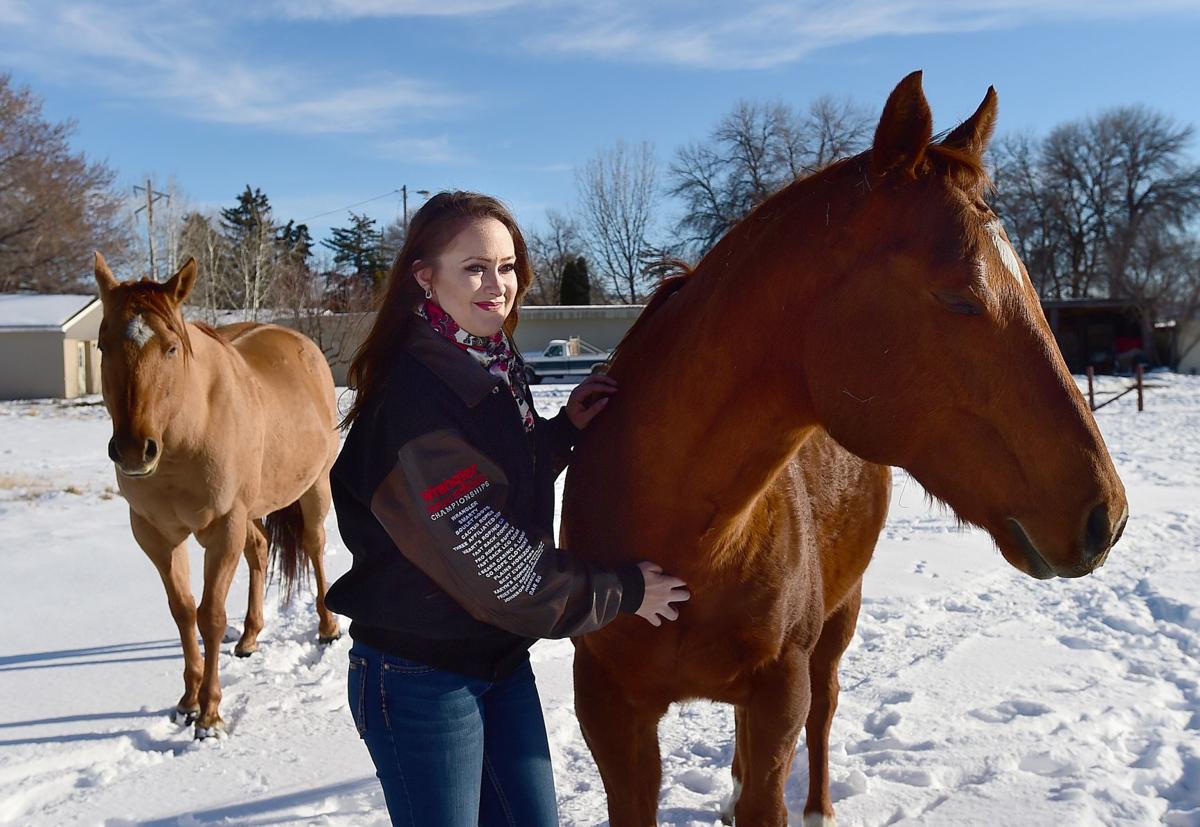 Rodeo performer and artist Elyssa Leininger pets "Whistling Missile" on Tuesday after the quarter horse was stolen from a pasture and was found tied up at the Vegas Hotel in Billings. Missile shares the field with "Doc." 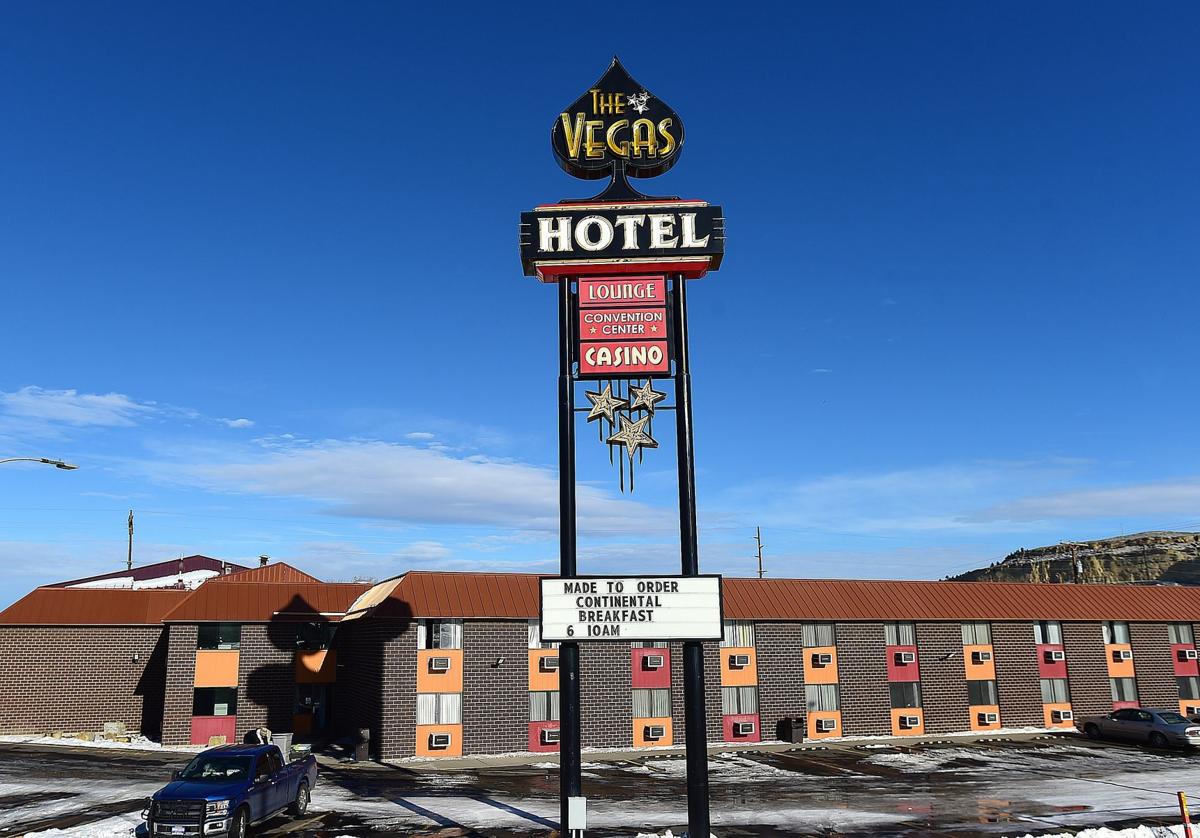 A quarter horse was found tied up outside of a room at the Vegas Hotel in Billings Sunday morning. 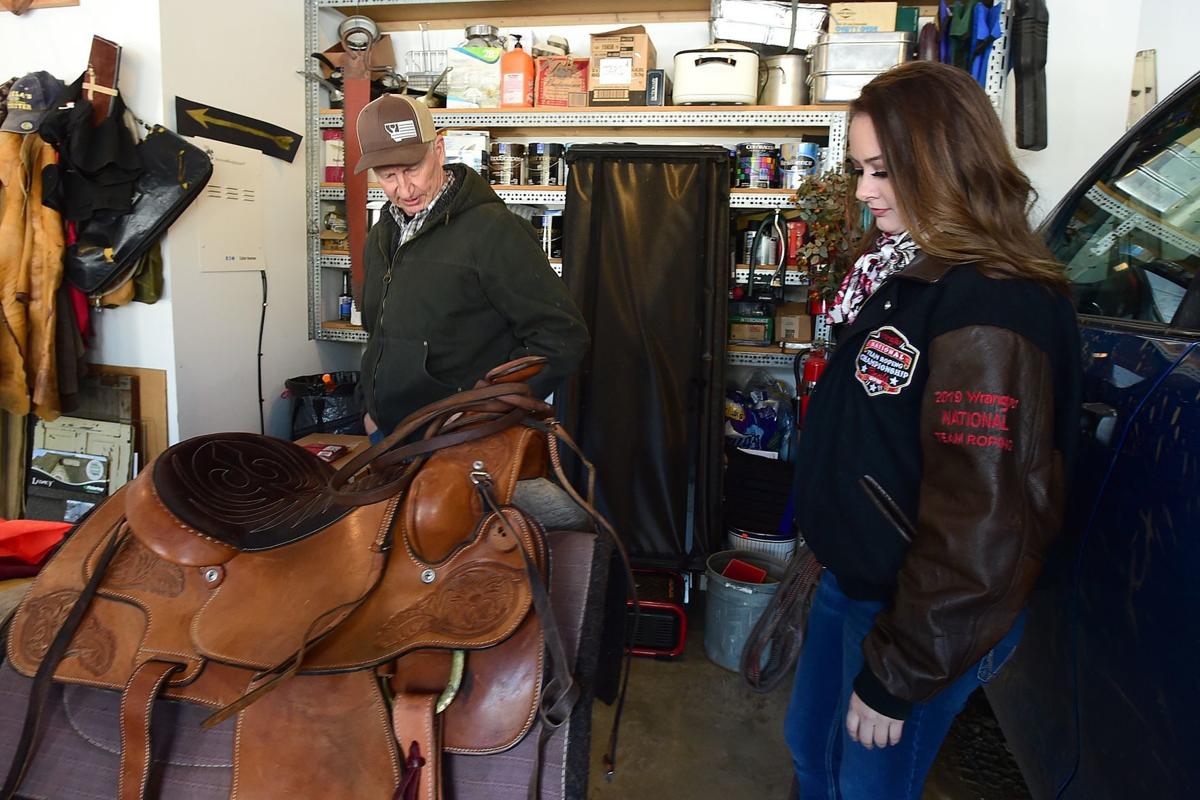 Rodeo performer and artist Elyssa Leininger and her father Dean look over damage to a saddle after it and her horse "Whistling Missile" were stolen from her pasture.

To hear Elyssa Leininger tell it, by the time anyone realized her prized quarter horse, “Whistling Missile,” had been stolen, the animal’s moonlight trip to the Vegas Motel was already lighting up Facebook.

It was Sunday morning, and Leininger’s father, Dean, had gone outside to check on the animals and discovered his daughter’s horse missing. There was one set of boot tracks leading from King Avenue East into the family’s snow-covered South Billings pasture, and one set of horse tracks alongside the boots in a trail leading back to the street.

“They walked the horse down King Avenue, east past my house. They went down Washington Street and started riding across fields. That’s where we lost their tracks,” Elyssa Leininger said.

Elyssa Leininger was frantic. The horse she bought as a 4-H project, barrel raced on and rode as a queen in the Miles City Bucking Horse Sale, had vanished. The horse thief had quite possibly had an easy time nabbing Missile because the horse was too nice after a decade of a girl's love for horses.

Dean busied himself trying to pick up Missile’s trail, while Elyssa began notifying friends in the Billings horse community that her barrel racing partner had been abducted. One of her girlfriends, who had dealt with missing animals before, told Elyssa to spread the word on social media. So, she did, after calling police.

“In less than an hour, we had 2,000 shares and people commenting ‘I saw a horse,’ and then 'I saw a horse at the Vegas Motel,’” Leininger said. Then, someone shared photo evidence: tethered to a hotel staircase, posing beside a hotel wastebasket filled with water, there was Missile.

“Yes, here at the Vegas Hotel we are definitely pet friendly, but a (horse emoji)??? Hahahaha only at the M-- Vegas,” posted Shawnee Rodriguez, the motel’s assistant general manager.

The Vegas is a former flagship of Montana's War Bonnet Inn franchise. The horseshoe-shaped motel is the kind that offers deeply discounted rates and asks guests to remain at the counter while a maid looks over the room before bills are settled.

Vegas employees working the graveyard shift reported seeing the horse tethered outside room 310 around 4 a.m. Guests reported a man roaming through the Vegas with a saddle. He was a big man. Though security cameras failed to capture a decent image of Whistling Missile’s midnight cowboy, the footprints through the snow at Leiningers’ suggest his boots were sized larger than 13.

Dean Leininger arrived at the motel shortly after the police, who had already spoken with the occupants of room 310. No one in the room recalled seeing a horse, but they remember a man with a saddle showing up to a party in the wee hours Sunday.

No one answered the door to the motel room when The Billings Gazette knocked Tuesday. The area outside the room told Missile’s side of the story. There are landscaping rocks in disarray where the animal had spent the night and a thick carpet of horse manure that had been boot stamped into the threshold of room 310. The beige wastebasket was still beside the stairs three-quarters full with a block of ice.

It’s not uncommon for cowboys staying at the Vegas Motel to park their animal trailers in the parking lot, where the horses spend the night, said Jessica Schmidt, Vegas general manager. The hotel is located on 27th Avenue South, right next to the interstate. It’s a quick 10 minutes from two stockyards. It's also 1.7 miles from Missile's home.

A good saddle costs several thousand dollars, Schmidt said. Guests usually bring them into the hotel for the night. But yes, a horse tethered to the motel stairway, drinking water from the wastebasket isn’t normal.

It was the wastebasket that got Elyssa thinking that the horse thief cared about Missile, at least a little bit. The horse had been found with a blanket mark pressed into his hair, an indication that his abductor knew better than to leave it on the animal damp in the cold December air.

The way the thief opened the family’s horse trailer, picked out the right all-purpose saddle and managed to get it cinched up on Missile showed he knew what he was doing, said Dean Leininger. The abductor might have been admiring Missile for some time, at least long enough to saddle up in the dark.

There’s a criminal element to the East King Avenue where the Leiningers live. The Yellowstone County Detention Center is just down the street, and there’s a lot of foot traffic to and from the jail along East King Avenue.

When Dean Leininger pulled up to the Vegas Motel with his truck and horse trailer, Missile was ready to go. The quarter horse broke for the back end of the trailer without a fuss. At home, Missile gave out a few kicks and raced around the yard before settling down.

The saddle didn’t return home right away, Elyssa Leininger said. The party was over by the time police arrived and both the midnight cowboy and the saddle were gone.

But officers found the saddle later in the back seat of a small car pulled over for suspicious activity.

“It was strange, the sheriff said something in the car didn’t look right and they pulled it over,” Elyssa Leininger said. “The people in the car said they didn’t know it was in the backseat.”

The people in the car surrendered the saddle, which the Leiningers said had a foul, drug smell.

It could have been worse, said Elyssa Leininger’s mom, Chris. Had the horse abductor walked the animal out to a trailer and driven away, the animal might be lost. That he rode away on Missile was a stroke of luck.

Elyssa Leininger went outside and comforted her friend after his return Sunday. It had been only an hour since she posted his disappearance on social media, but he was back.

She logged onto the Facebook to thank everyone who spread the word. The story was still churning, getting weirder by the minute. There were comments from people in Las Vegas, not surprised by the abduction, but the snow outside the Vegas Motel.

Outside, Whistling Missile was too busy filling up on hay to reveal what really happened at the Vegas, where he’s been dubbed motel mascot.

The old Dooley church attracted a congregation that never sat in its pews. Instead, for years the flock gathered outside the leaning, abandone…