Coyotes and golden eagles may help keep infectious diseases like brucellosis from spreading, a recently published study has found, raising questions about the advisability of predator control and the use of lead bullets.

Brucellosis can be spread from infected cow elk when their aborted birthing materials are touched by cattle. Brucellosis infection in livestock leads to mandatory quarantine and testing that is expensive for ranchers.

Scavengers and predators that find and consume an infected elk’s afterbirth appear to lessen the chances for the disease, caused by bacteria, from infecting other animals – including livestock, dogs, elk, bison and even humans.

Ravens, crows and magpies were some of the first species to show up at the test sites, possibly alerting other scavengers.

“That was another thing that caught our attention is the role avian scavengers played,” Szcodronski said, especially when compared to other studies conducted in Wyoming.

All told, 15 different species visited – including black bears and wolves, skunks and pine martens – for the free USGS meal.

“It was just surprising how quickly the remains were removed by scavengers,” Szcodronski said.

Removal of the test material was often consumed within 16 days. Depending on the conditions, brucellosis can persist in infected birthing material on the landscape for several weeks to months.

Consumption was more likely in grasslands as opposed to forest and sagebrush lands, possibly because the fetuses were easier for scavengers to see and smell.

“The main takeaway is that scavengers can potentially reduce the risk and potential spread of brucellosis between elk and livestock,” Szcodronski said.

Erik Molvar, of the conservation group Western Watersheds Project, said the study emphasizes the need for “robust populations of native predators.” A similar claim has been repeatedly echoed by wolf advocates as Montana legislators and the state’s wildlife agency have loosened restrictions on wolf hunting and trapping.

Molvar said Montana and other western states need to get more comfortable with “allowing nature to do its job” rather than targeting predators and scavengers as nuisance species.

“A little humility about coexisting with nature would come in handy,” he said.

Coyotes can be shot year-round in Montana and are sometimes targeted by ranchers and the U.S. Department of Agriculture’s Wildlife Services to reduce depredation on livestock, especially sheep.

While acknowledging the role of scavengers in a healthy ecosystem, Gail Keirn, legislative and public affairs specialist for the USDA-APHIS-WS National Wildlife Research Center in Colorado, said her agency attempts to focus on “specific animals causing damage in very limited areas.”

The study highlights paradoxes for ranchers and wildlife agencies. Should ranchers reduce predator control efforts on lands near infected elk populations to lessen the likelihood of brucellosis transmission to their cattle?

The study pointed out: “there was a high probability (88%) that ranches with active scavenger reduction have slower removal time of abortion materials, potentially exposing those ranches to higher spillover risk given the same background rate of brucellosis prevalence in elk.”

Recognizing the fallout such findings may trigger, the researchers acknowledged the complications.

“We recognize that although mammalian scavengers can help reduce disease transmission risk, there is a balance for ranchers to consider between the costs of negative impacts to livestock operations from mammalian scavengers and the benefits they provide in removing abortion materials from rangelands,” the researchers wrote. “Studies suggest that livestock losses to predators appear to be relatively low on a landscape scale, but losses are not uniform spatially and small losses can represent a significant burden to ranchers which may lead to more aggressive scavenger removal actions.”

On the other hand, public Forest Service lands although allowing hunting still saw high scavenger removal rates of the test material, Szcodronski noted. That could be due to their abundance on public lands or it may be that the landscapes are so large and connected, she speculated.

The study also highlights another issue: Should hunters be required to use only copper bullets to reduce lead poisoning in golden eagles? Golden eagle populations have declined across the West with studies pointing toward lead poisoning as a major cause, in addition to the birds colliding with human-made objects like wind turbines and power lines.

“Lead poisoning is prevalent in golden eagles in southwest Montana with lead being detected in the blood of 97% of wild-caught eagles in southwest Montana, with 45% of those showing acute lead levels,” the scientists noted. “Much of this lead poisoning likely comes from hunter-killed carcasses and from recreational shooting of ground squirrels, coyotes, and other unregulated species. These studies highlight the potential importance of carcass removal programs and using more wildlife-friendly non-lead ammunition for hunting and demonstrate the role state game agencies, conservation groups, and the hunting public can play in reducing the amount of lead available to scavengers on the landscape while educating others on the potentially harmful effects of lead-based ammunition.”

The study was conducted at 264 sites in southwest Montana in 2017 and 2018. The research required Szcodronski to study more than a quarter-million photos.

The analysis used disease-free cattle fetuses placed across different landscape types – grasslands, sagebrush and forest – to document which scavengers may arrive at an abortion event and how quickly they would find the material. Remote cameras were set up to document what animals visited. VHF radio transmitters were installed in a portion of the fetuses, collected from a slaughter house, to track how far away the material was moved.

These regions are part of Montana’s Designated Surveillance Areas for brucellosis in elk, where the Montana Department of Fish, Wildlife & Parks works to prevent transmission from elk to cattle and monitors infection rates. Under the agency’s brucellosis management program, tools such as hazing, fencing and lethal removal are used to keep elk and cattle separated, especially during the spring when elk give birth.

Brucellosis, which infects an estimated 20% of elk in the Greater Yellowstone Ecosystem, can cause pregnant elk, bison and cattle to abort. About 60% of Yellowstone National Park adult female bison have been exposed to brucellosis, one reason the state of Montana has fought to keep the animals from migrating into the state in winter. Livestock in the DSA are monitored and vaccinated against brucellosis.

February through July is the window for elk abortions, with most incidents concentrated from March through May.

Infected birthing material is the main way brucellosis is spread, as animals come into contact with tainted fetuses. The study documented deer, bison, pronghorns and cattle touching the uninfected test fetuses. At least 142 elk visited the aborted fetuses, including two cases where 20 elk showed up within one hour.

Concentrations of elk, such as at winter feedgrounds in Wyoming, can raise the risk of disease transmission. But studies in Wyoming have also shown that these large gatherings of elk can attract scavengers to clean up aborted fetuses, helping to explain why brucellosis infection rates are now about the same in fed versus free-roaming elk, the study noted.

A similar study near Yellowstone in 2012 “estimated the mean removal rate of (bison) fetuses was 18 days.”

Chronic wasting disease – an always fatal infection in elk, deer and moose – has been slowly but steadily spreading across Montana and other regions of the United States.

The first case was documented in wild deer in Montana in 2017. Since then, CWD has been found in whitetail and mule deer across much of the state, with isolated infections in elk and moose.

Recent research highlighting the role scavengers may play in reducing the spread of brucellosis also noted these animals could play a role in limiting the spread of CWD. Recent CWD research may not support that claim.

“On the one hand, predators and scavengers can effectively reduce or theoretically remove potentially infectious animals and/or carcass parts from the environment,” Cory Anderson, a graduate research assistant at the Chronic Wasting Disease Response, Research and Policy Program at the University of Minnesota, wrote in an email. “However, the resilience of CWD prions raises questions about just how much reduction or removal is really taking place.”

Prions are the proteins that spread CWD. They can remain infectious for months and possibly years on the ground, placed there by an infected animal’s bodily fluids and feces. Hunters and meat processors are advised to use a 50% bleach/water solution and soak their equipment for one hour to avoid spreading prions. The other alternative is 1,800 degree heat.

Anderson cited two studies that showed prions remaining infectious even after passing through the digestive tract of crows and coyotes – up to three days after the coyote consumed the infected material.

“With this finding, the authors concluded that mammalian scavengers were capable of moving CWD prions and leaving them in the environment,” he said.

“That being said, it's still unclear just how much risk this adds or detracts,” he added. “There's the potential that predators and scavengers could dilute the amount of infectious material via consumption and subsequent defecation. At the same time, it's possible that they could help seed infection in other areas.”

Studies have confirmed COVID-19 infections or exposure to the virus in wild whitetail deer in several states.

A total of 398 bison were sold Saturday at this year's auction.

University of Montana, MonTEC get $850K to support Indigenous entrepreneurs

The grant will allow MonTEC to collaborate with Salish Kootenai College and Blackfeet Community College to develop programming online in a wide array of subjects to support female entrepreneurs.

Free elk hunts offered through a random drawing are helping the Paradise Valley Ranch reduce its elk population while also building relations with the community.

Elk fed amid concern about spread of chronic wasting disease

Elk are being fed this winter in the Greater Yellowstone Ecosystem amid concern that concentrating thousands of animals on feed could worsen the spread of chronic wasting disease.

With its diversity of predators, could Yellowstone National Park be a disease-free island in a surrounding sea of chronic wasting disease? 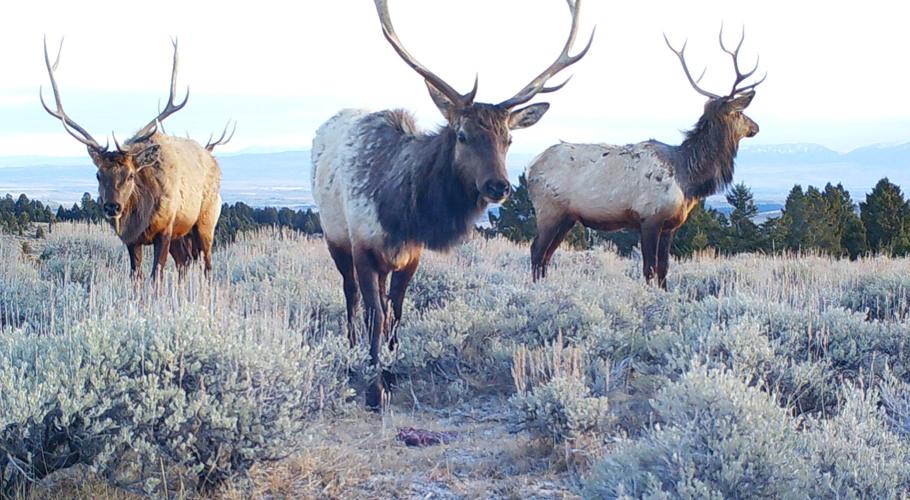 Bull elk investigate a fake abortion site in southwest Montana as part of a study examining disease spread. The elk were photographed with a game camera set up at the site. 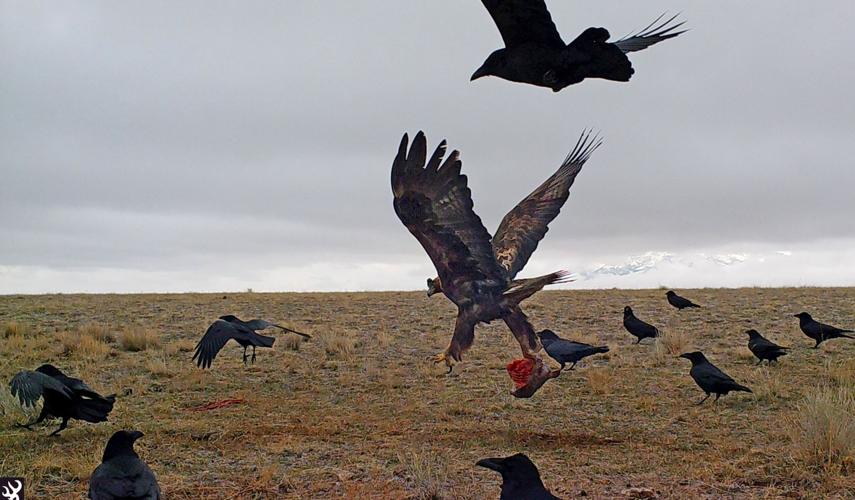 Avian scavengers were often the first to arrive at the study sites, which may have attracted larger animals like this golden eagle. 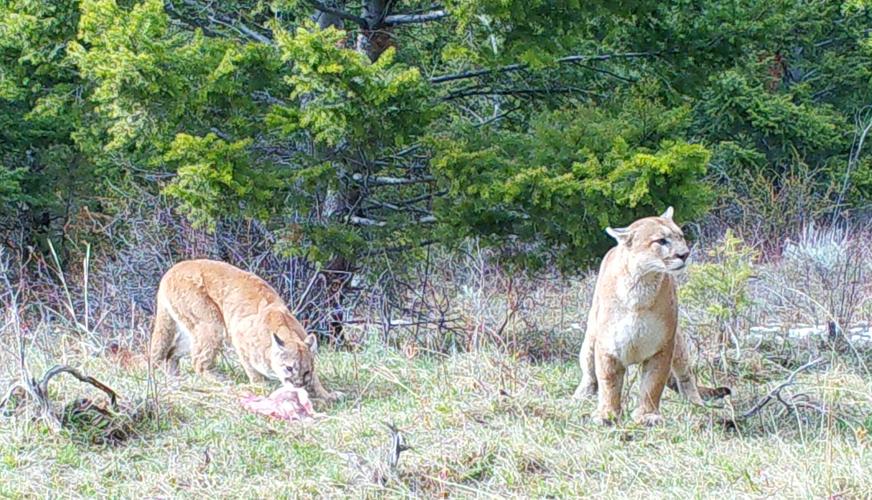 Mountain lions were one of 15 species that were photographed visiting the test sites. 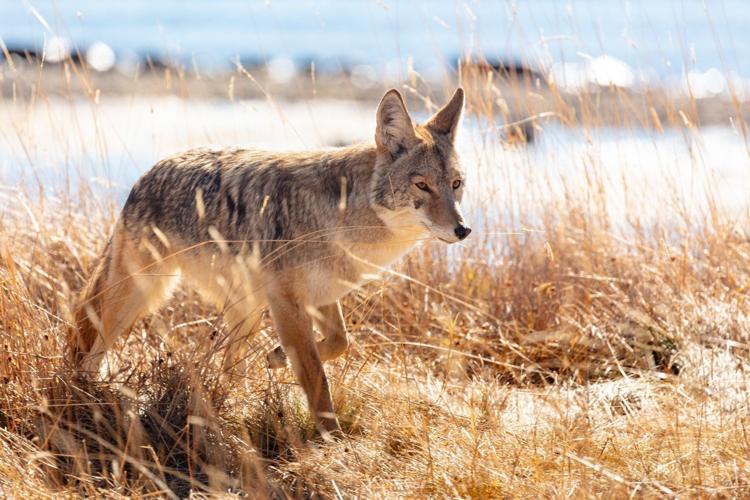 Scavengers like coyotes can play a key role in reducing the spread of disease by consuming infectious material, a recent U.S. Geological Survey study has found. 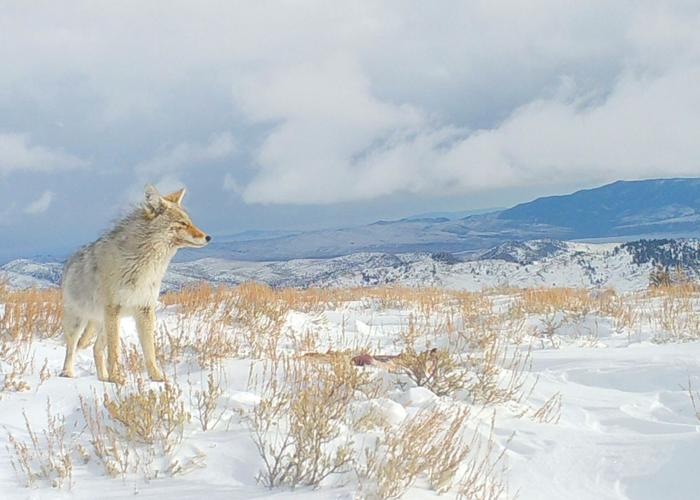 Coyotes and golden eagles consumed the majority of the test material.