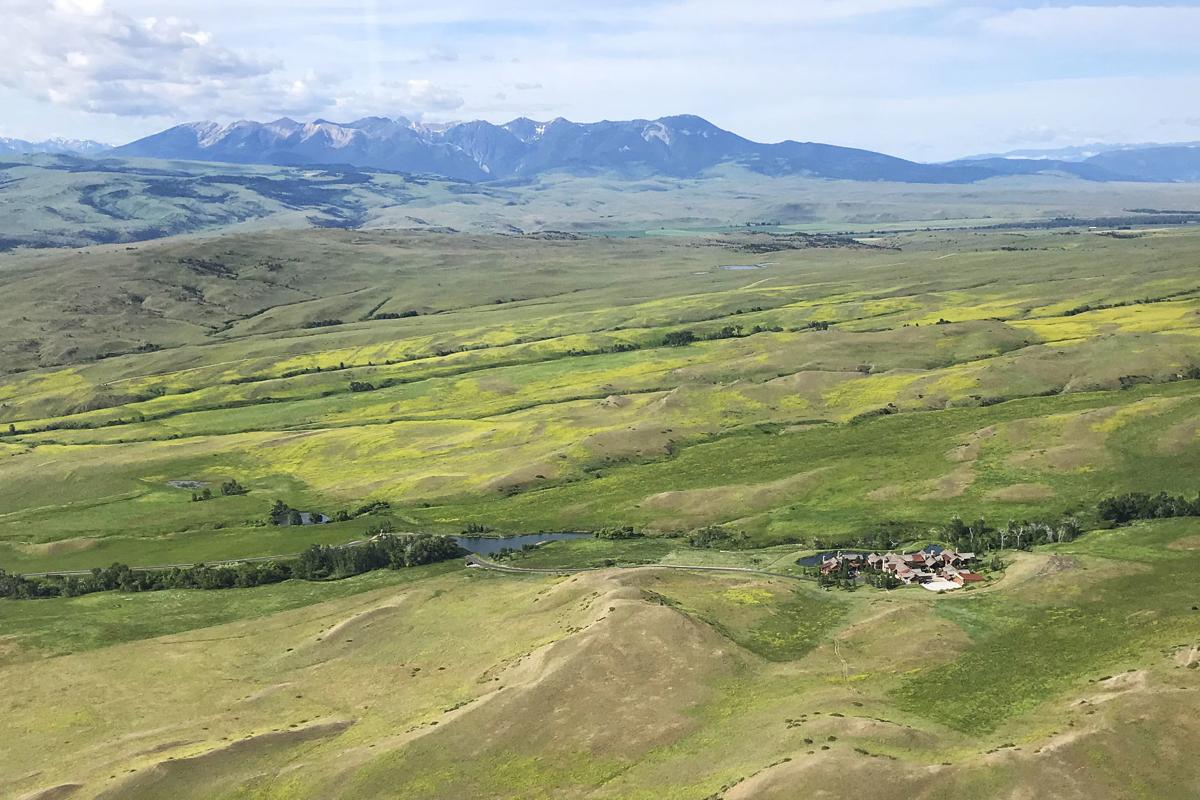 A large estate with a helicopter landing pad is tucked into the hills north of the Yellowstone River and with the Absaroka Mountains in the background. 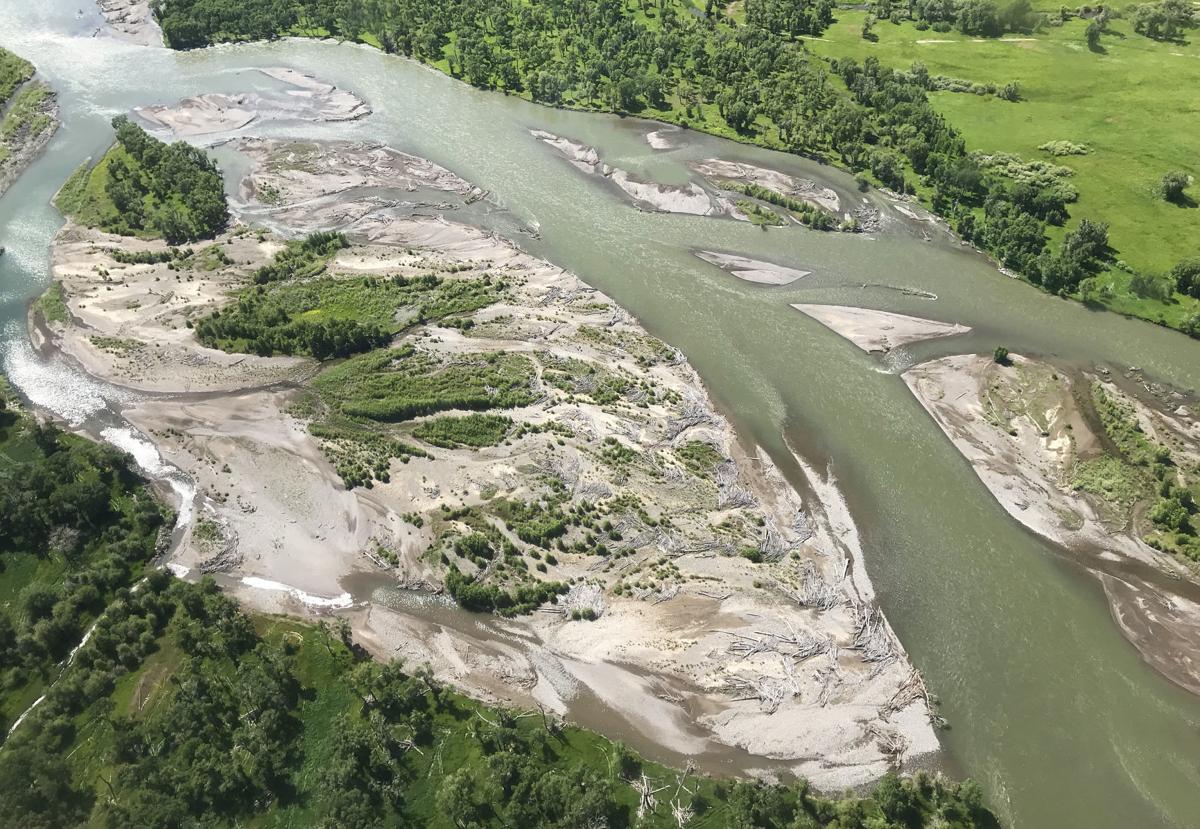 The Yellowstone River curves around an island between Big Timber and Livingston. 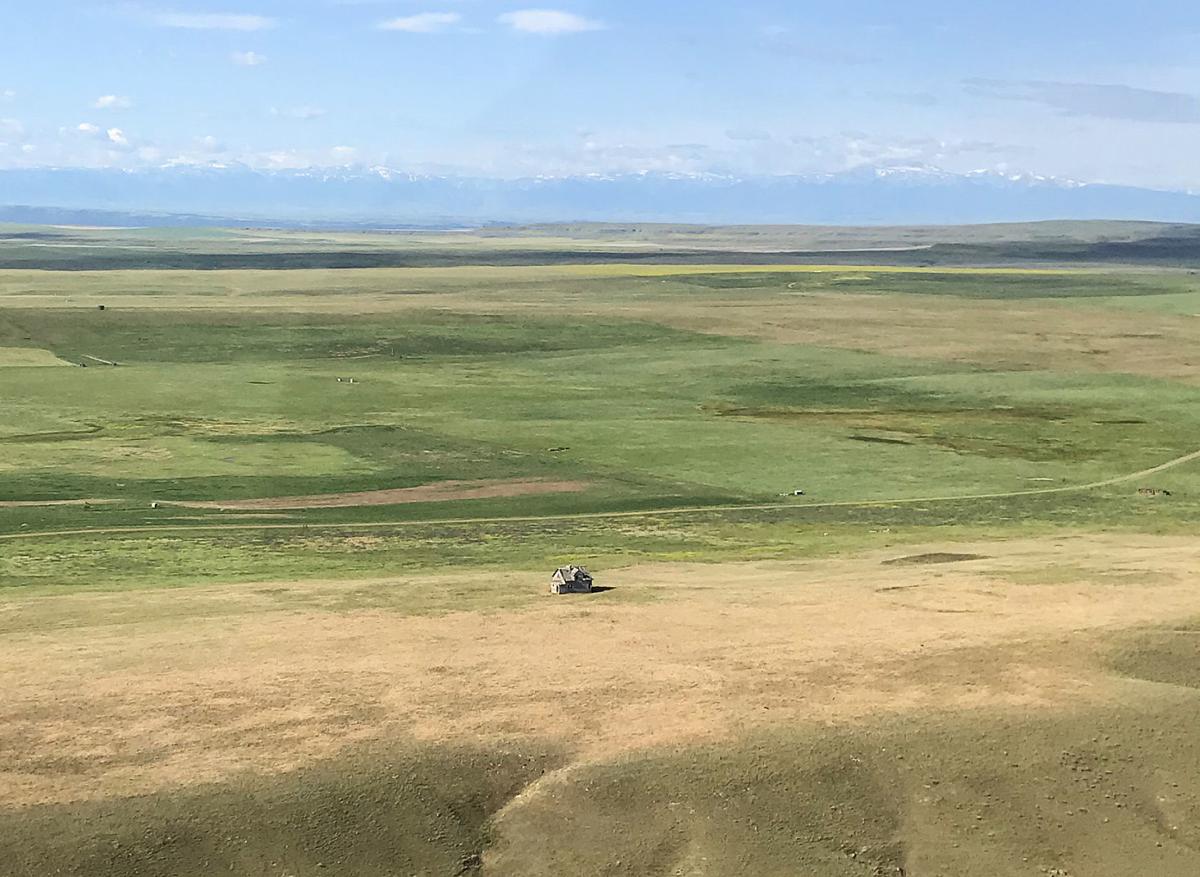 A large abandoned homestead stands atop a hill on the prairie north of Laurel and with the Beartooth Mountains visible in the distance. 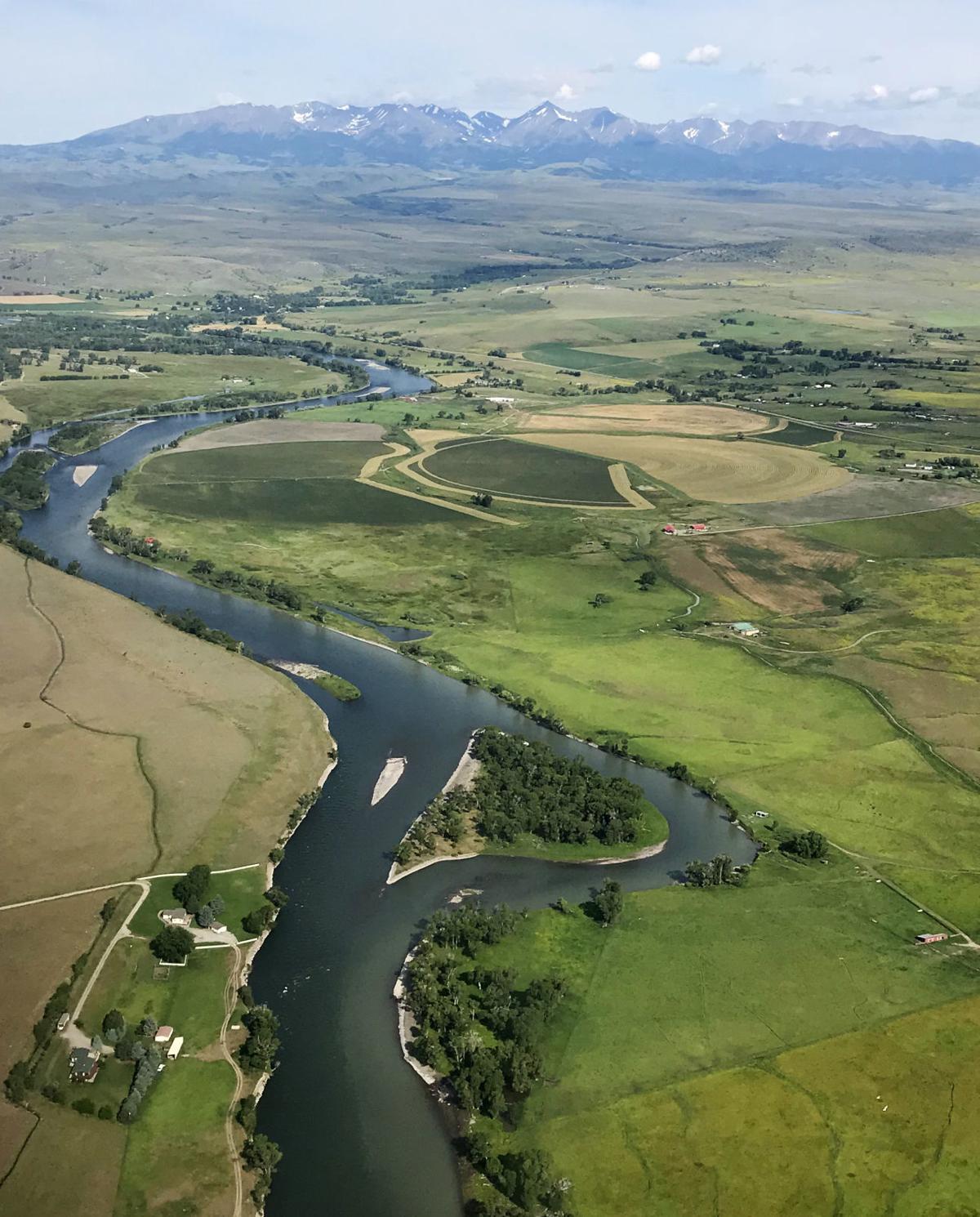 The Yellowstone River twists its way downstream below Big Timber and with the Crazy Mountains in the distance. 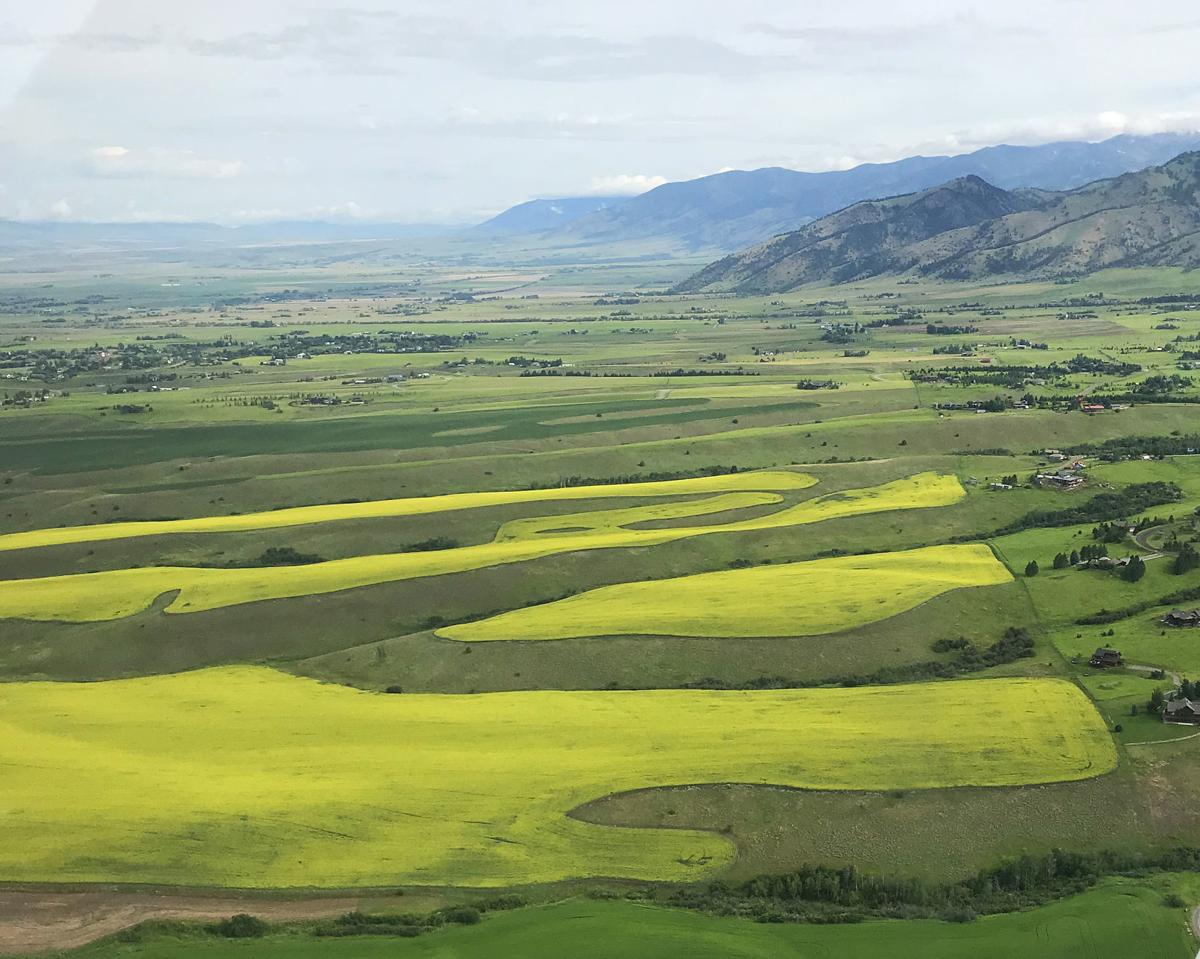 Yellow sweetclover covers fields at the base of the Bridger Mountains north of Bozeman. 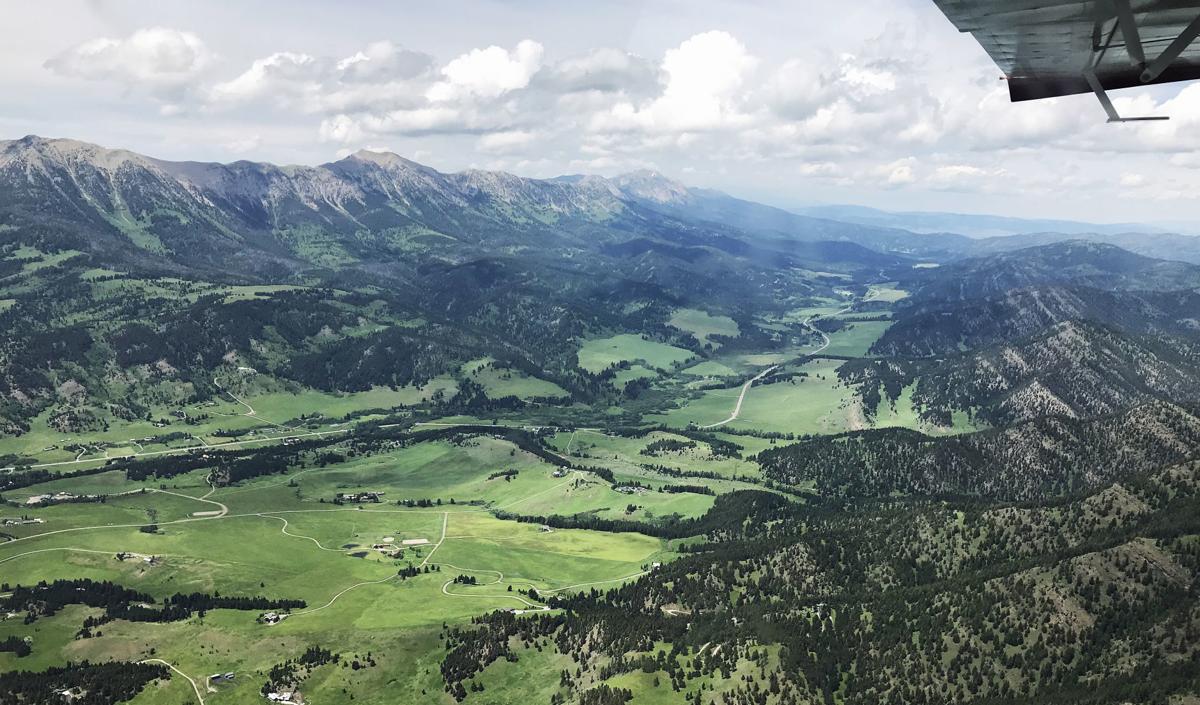 The Bangtail Mountains at right provide an arching contrast to their larger Bridger Mountain peaks across the valley to the left. 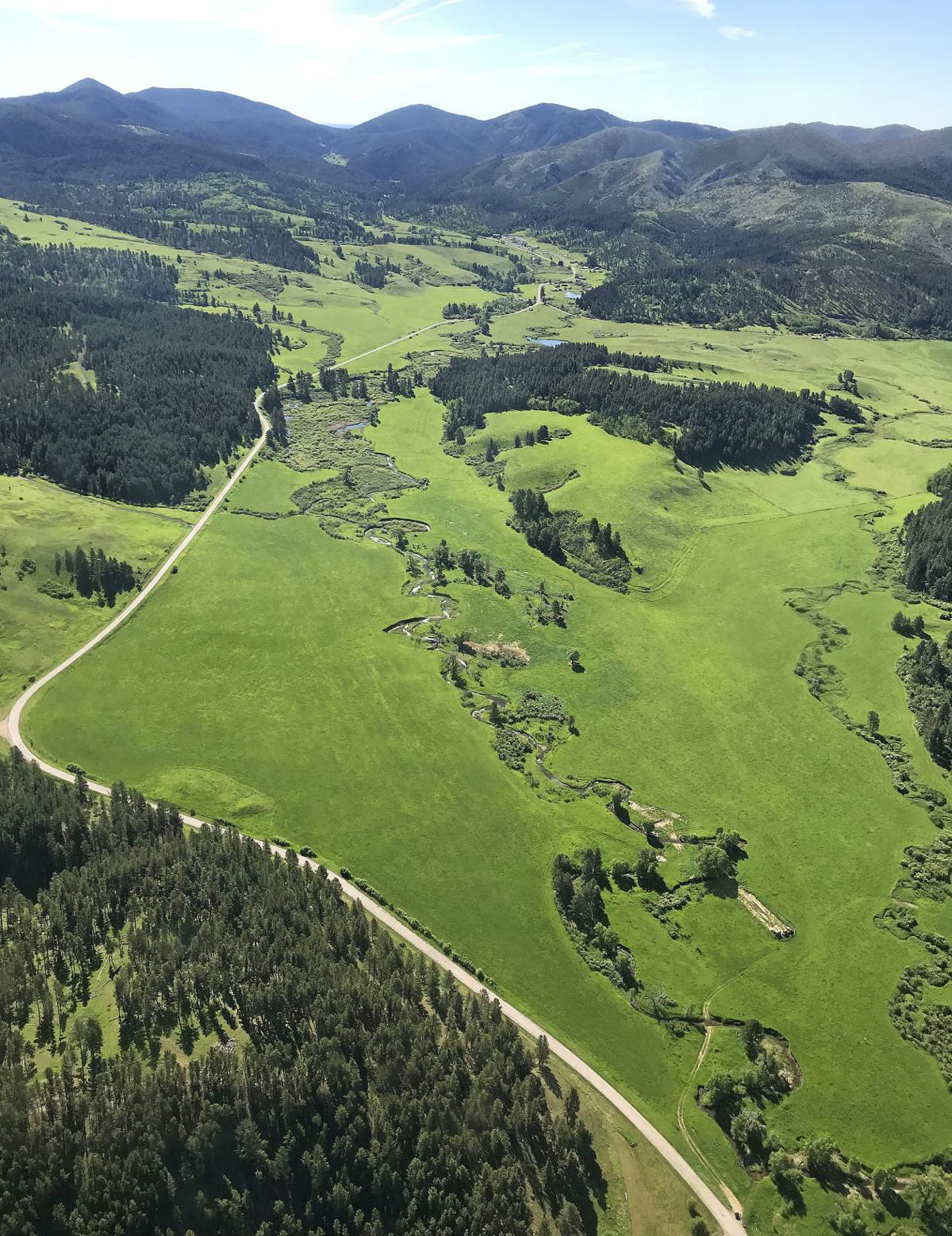 Fields below the Judith Mountains are green with growth and cut by the squiggles of two streams.

Nothing makes me feel much smaller in this world than flying over the countryside in a light plane.

A huge combine looks more suitable for a gnat to drive. Antelope are tiny white-and-tan specks. Prairie dog burrows appear like crater holes with the large rodent’s trails radiating outward as if blasted into the ground by an impact.

This summer I’ve been lucky enough to fly over the Missouri River Breaks, Crazy Mountains and from Billings to Bozeman. It’s always fun to try and pick out certain landmarks from the air, as if it ties me to the landscape passing serenely below from which I’ve been temporarily detached.

At times I feel like a downy feather lightly adrift on the wind, but with a much greater sense of gravity when it comes to an unexpected descent.

There are a few things following these aerial tours that have resonated with me.

One is that Montana has such huge swaths of undeveloped land. I have known that ever since I grew up roaming the hills of Bozeman and visiting my cousins near Grass Range. But seeing the vast expanse from the air with little development drives home that fact. We are few and far between.

Rushing down interstates or even two-lane highways, it’s easy to forget that just a quarter of a mile away there are acres and acres of prairie or forest. Most development occurs, for obvious reasons, along the roads we are tied to in our vehicles. But launch above it all and you will see just how spread out Montanans are between this spiderweb of roads connecting rural homes, towns and cities.

That fairly empty expanse also emphasizes how lucky we are in Montana to have agricultural, reservation, state and federal lands that remain undeveloped. Residents and visitors have lots of room to roam.

This spring has been unusually wet across the state, making it as green as I imagine Ireland to be. Mixed in with that has been a huge bloom of yellow sweetclover, covering entire fields in yellow blooms. Such greenery this late in the year seems so unusual for Montana and is highlighted by being airborne.

The state appears lush, almost tropical. The air is thick with humidity, the sky taking on a gauzy appearance from the moisture hanging in the air.

Winding through the greenery are the meandering creeks, rivers and canyons that always capture my attention. There’s just something about the serpentine nature of waterways that amazes me, how they can almost connect at oxbows only to be diverted by a rocky bank or vegetation.

Canyons are somewhat similarly defined by the furrows of side canyons and waterways carving their sloping sides in raisin-rough contours. The shadows and contrasts of such relief on the landscape adds to its beauty, a good reason not to fly at high noon. Better to wait until the shadows are longer in the morning, especially since the air seems to be much calmer at that time of the day for lightweight flyers like me.

If you build it

One other thing I’m struck by while flying above the earth is that people will build anywhere and everywhere. It can be startling to see a road carved up a vertical cliff just to reach a small butte where a cabin rests.

Damn the cost of road construction, or the price of hauling all of the lumber and other building materials to the top of a mountain. If someone likes the view they will spare no expense getting to that prime building lot that some farmer or rancher probably gladly parted with, laughing all the way to the bank, because it was so inaccessible.

Many of these homes — whether used a few months in the summer, winter or year-round — are tucked back far from the nearest highway so that until a fire burns through the timbered hills you wouldn’t know there were so many houses tucked into the countryside. A few of them are huge, with fishing ponds in the backyard even though a river runs through the front, or a helicopter landing pad in the courtyard. Seeing such features seems almost voyeuristic, since the homeowners have taken such great pains to be so far from anyone's view.

Airborne views also reveal the vestiges of our prairie ancestors dotting the plains: planted trees creating windbreaks for homesteads that no longer stand, or abandoned houses sandblasted free of paint by the endless torment of wind, whose ceaseless blowing it is easy to imagine driving the homeowners mad.

Not all of my flights have been so reflective in nature. My first time in a small plane I foolishly ate a microwave burrito and then was staring through a telephoto camera lens to photograph a truck convoy. Try driving down the highway looking through binoculars and you’ll see how quickly it can make your stomach and head feel queasy. Looking through a camera while flying in a plane is similar.

One of my fellow passengers this spring was a young woman who quickly became uneasy as we occasionally bounced like socks in a dryer while skirting the Crazy Mountains. Luckily, she made it back to the airport without losing her lunch, but she spent most of the trip with her eyes closed. Hopefully that experience won’t keep her from giving small airplane flights another try.

If anyone ever offers you a chance to fly low and slow over the landscape, or the opportunity arises to pay for such a flight, give it a whirl. Leaving this earth may seem like a routine event for the pilot, but for those of us green in the wings it can provide an entirely new perspective on the world.

Of course, you will have to open your eyes for that solemn experience.

Photos: Montana and Wyoming from above