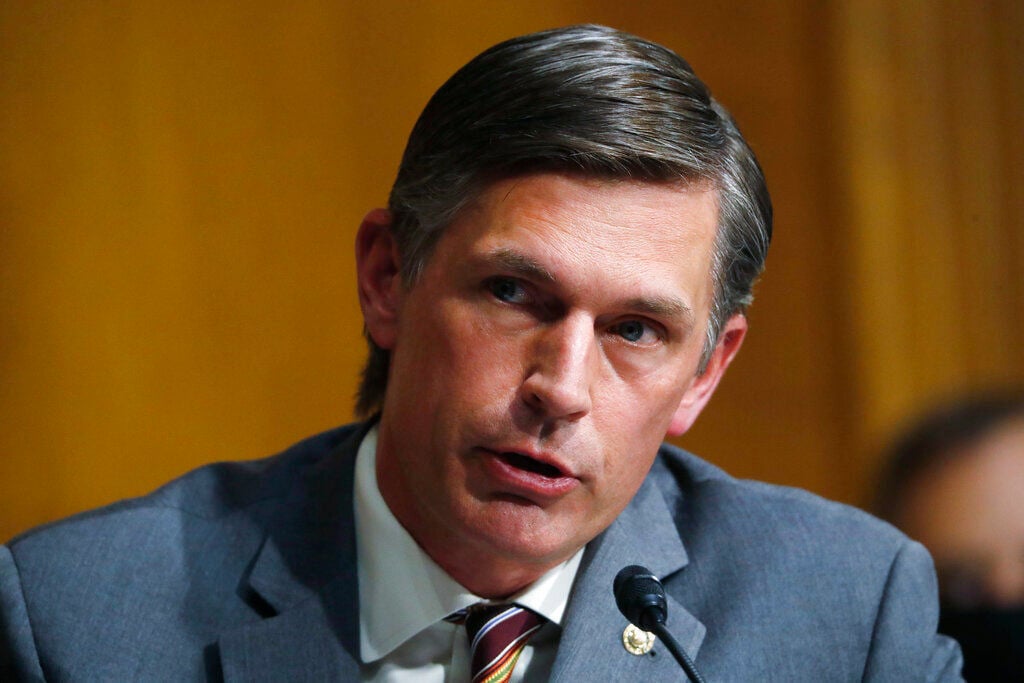 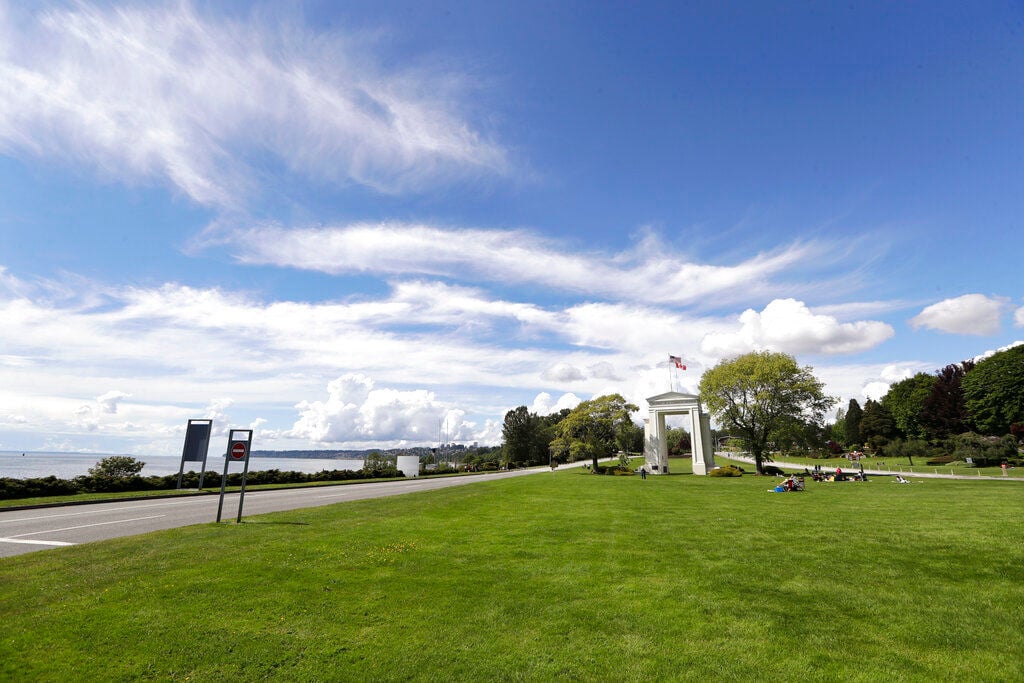 In this photo taken May 17, 2020, a handful of people meet at the Peace Arch in Peace Arch park, between the U.S. and Canada, in Blaine, Wash. (AP Photo/Elaine Thompson) 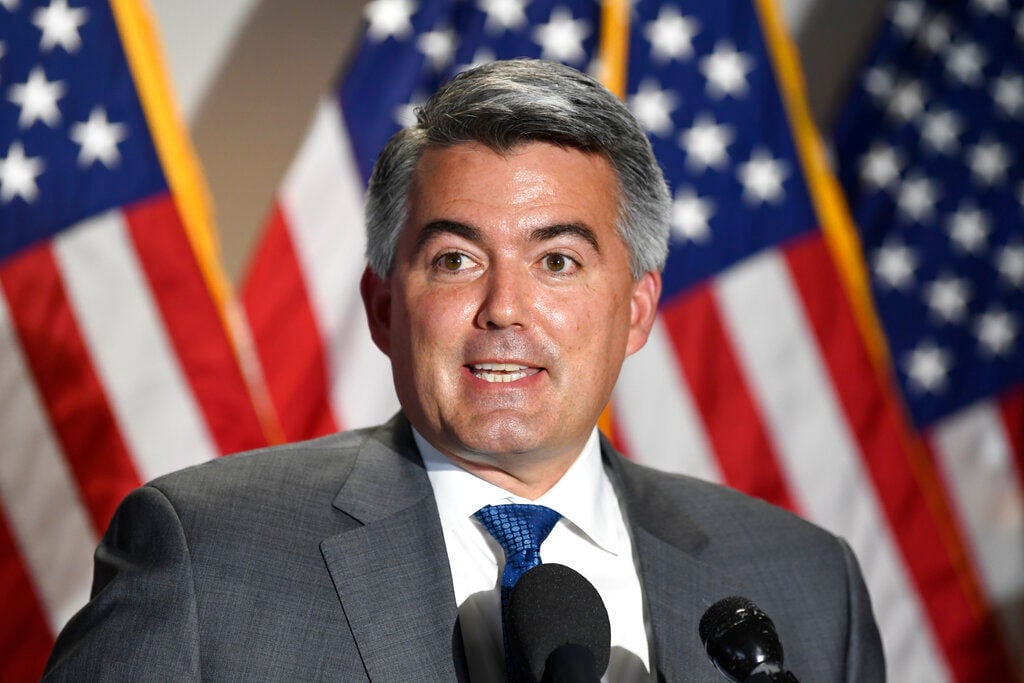 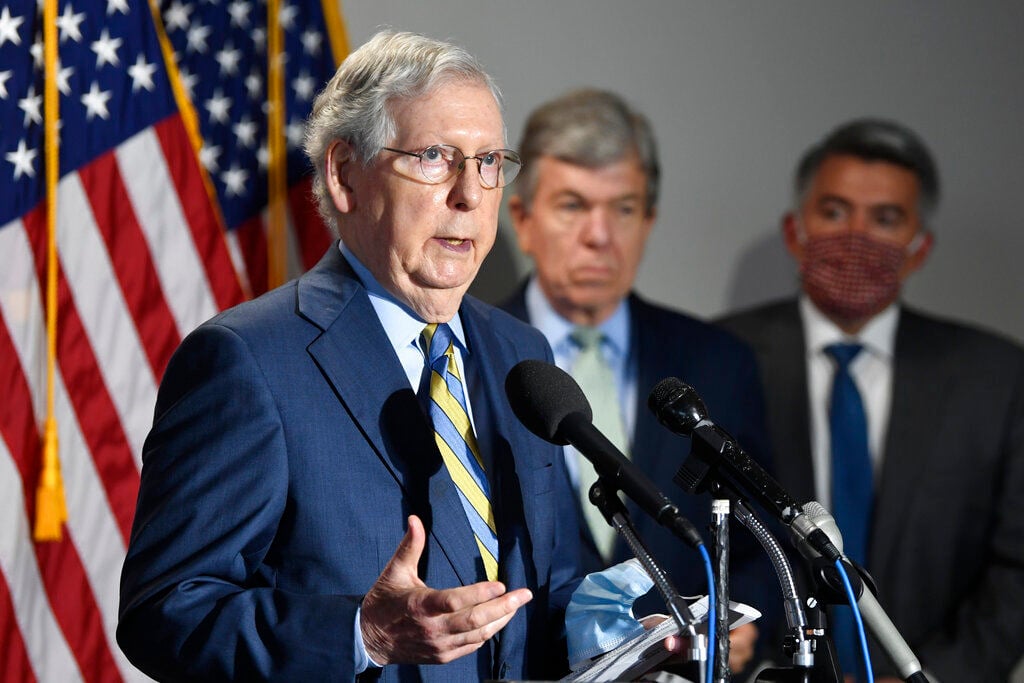 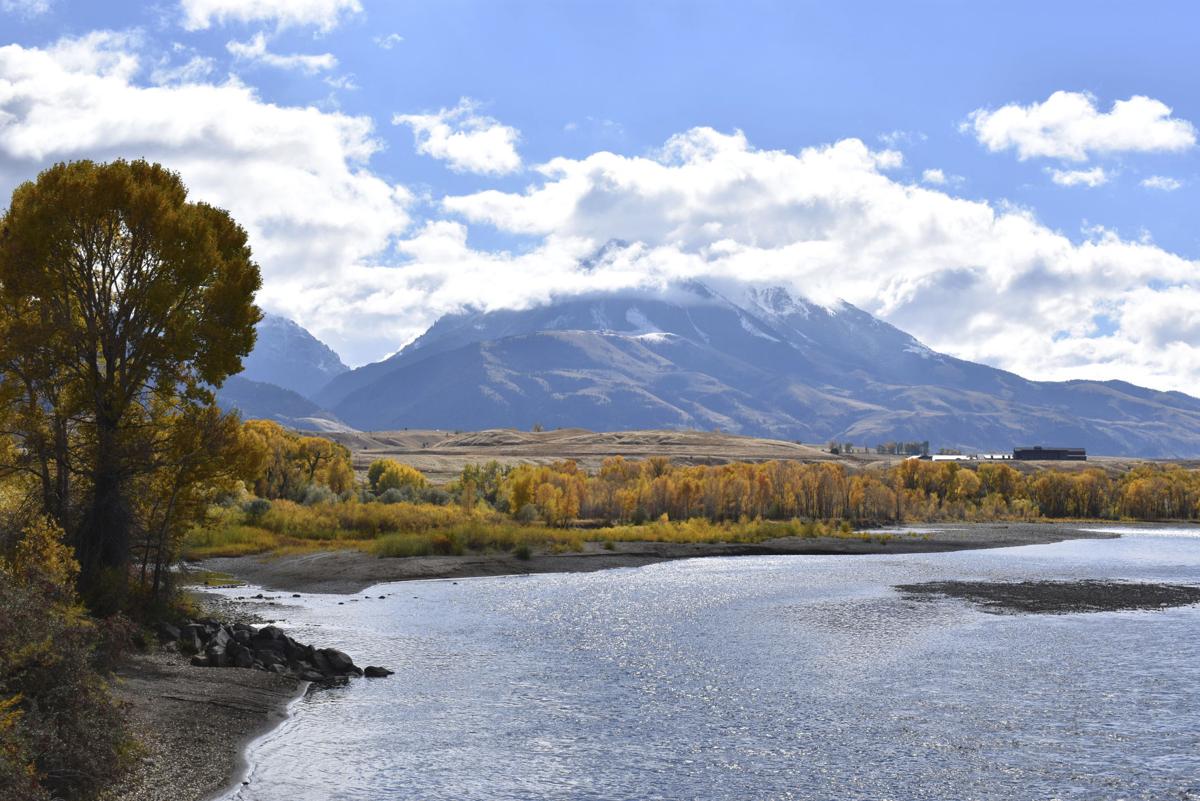 Emigrant Peak is seen rising above the Paradise Valley and the Yellowstone River near Emigrant in this Oct. 8, 2018, file photo. 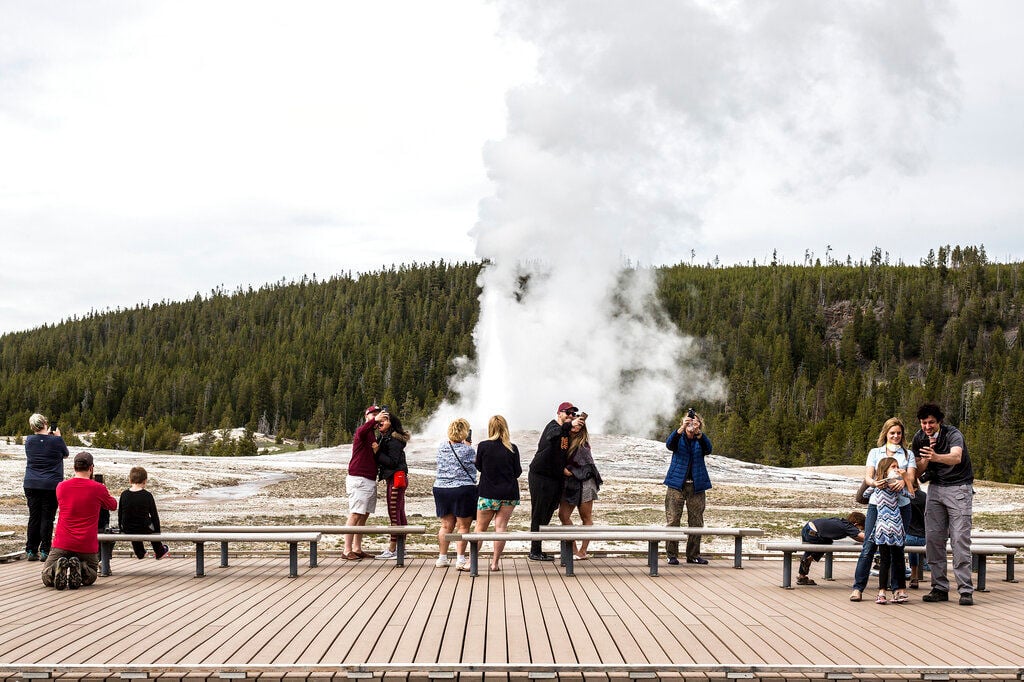 FILE - In this May 18, 2020 photo, visitors watch as Old Faithful erupts on the day the park partially reopened after a two-month shutdown due to the coronavirus pandemic, at Yellowstone National Park, Wyo. Lawmakers have reached bipartisan agreement on an election-year deal to double spending on a popular conservation program and devote nearly $2 billion a year to improve and maintain national parks. (Ryan Dorgan/Jackson Hole News & Guide via AP, File)

WASHINGTON — The Senate has approved a bipartisan bill that would spend nearly $3 billion on conservation projects, outdoor recreation and maintenance of national parks and other public lands, a measure supporters say would be the most significant conservation legislation enacted in nearly half a century.

The 73-25 vote on Wednesday sends the Great American Outdoors Act to the House, where approval is expected. The bill would spend about $900 million a year — double current spending — on the popular Land and Water Conservation Fund, and another $1.9 billion per year on improvements at national parks, forests, wildlife refuges and rangelands.

"Public lands hold a unique place in the life of every state in America — from their natural beauty to their use for recreation to their pivotal roles in local economies,'' said Senate Majority Leader Mitch McConnnell, R-Ky.

The Senate vote will "ensure this inheritance will stand the test of time for generations of Americans yet to come,'' McConnell said, urging the House to pass it quickly.

Sen. Cory Gardner, R-Colo., one of the bill's chief sponsors, said the bill will create at least 100,000 jobs, while restoring national parks and repairing trails and forest systems.

Those measures are especially needed now, when communities surrounded by public lands have high unemployment rates because of shutdowns caused by the coronavirus pandemic, Gardner said. "This is an economic and jobs package as much as it is a conservation package,'' he said, adding that Americans who have been shut in by the pandemic "are ready to get into the great outdoors.''

Sen. Steve Daines, R-Mont., who has pushed for the bill with Gardner, said it "will help protect public access to our public lands and supports our national parks. It preserves and protects our Montana outdoor way of life.''

Gardner and Daines are among the Senate's most vulnerable incumbents, and each represents a state where the outdoor economy and tourism at sites such as Rocky Mountain and Yellowstone national parks play an outsize role.

The lawmakers persuaded President Donald Trump to support the bill at a White House meeting this year, even though Trump repeatedly tried to slash spending for the federal Land and Water Conservation Fund in his budget proposals. Trump has tweeted in favor of the lands bill, saying it "will be HISTORIC for our beautiful public lands.''

Sen. Martin Heinrich, D-N.M., said permanently and fully funding the program "will be a monumental victory for conservation and the places where we all get outside.'' He cited studies showing that each dollar spent by the fund creates an additional four dollars in economic value.

Visitors cannot enjoy national parks such as Yellowstone and Yosemite "if the bathrooms don't work, if the trails and campgrounds aren't open, or if the roads are in disrepair,'' Heinrich said. "These places that we all cherish deserve better.''

The bill's opponents, mostly Republicans, sounded a similar note as they complained that it would not eliminate an estimated $20 billion maintenance backlog on 640 million acres of federally owned lands. The bill authorizes $9.5 billion for maintenance over five years.

"The problem is, in the sixth year we'll still have a maintenance backlog,'' said Sen. James Lankford, R-Okla. "We'll still have issues, and there's still not a plan to pay for" the remaining work.

"We need to be better managers of our land, but we're managing our land by not managing our debt and not making the hard decisions that people have to make,'' Lankford said.

But to one GOP supporter, Ohio Sen. Rob Portman, doing "a better job in stewardship" would mean lower costs of maintenance in the long term.

Sen. Maria Cantwell, D-Wash., credited a "new coalition" of lawmakers from both parties who support conservation and public lands.

"We've made people aware of the juggernaut that the outdoors economy has been," Cantwell said, noting statistics showing that outdoor recreation and tourism supports $887 billion a year in consumer spending and 7.6 million jobs, much of it in the West.

"America deserves a break right now, and the outdoors is restorative," Cantwell said.

The conservation fund is paid for by revenue from offshore drilling for oil and gas, and that has led to complaints by some Gulf Coast senators that inland states receive an unfair share. Senators rejected an amendment by Sen. Bill Cassidy, R-La., to target his state and three others for additional spending.

Cassidy was among 25 senators, all Republicans, who opposed the bill. Twenty-eight Republicans supported it, along with 43 Democrats and two independents who caucus with Democrats. Democratic Sen. Patty Murray of Washington state and Ed Markey of Massachusetts missed the vote.

A fire in downtown Gardiner Tuesday destroyed at least three buildings and left a large plume of smoke hovering over the town.

Eastern Montana took stock Wednesday of hail and wind damage from rough storms the day before that also produced a tornado near Winnett.

Yellowstone County saw three deaths from the virus this week, all tied to a memory care facility.

Montana has added 85 positive cases of COVID-19 Saturday after reporting record-breaking daily new cases since the start of July.

Thirty-seven of the new cases added Monday were in Yellowstone County, where two more residents of a memory care facility have died. Another 19 were in Lincoln County, where late last week the county health department said it was investigating a possible cluster.

Comeback from COVID-19: 'You're not over it in three weeks'

Four months after suffering through and surviving the onslaught of COVID-19, life is still not normal for Heather Roan Robbins and her wife, Wren Walker Robbins. They’re not sure if it will ever be again.

Though he was saddened to hear of the deaths in Billings, Dr. Bruce Troen said that he wasn't surprised.

'Community of people' stricken by COVID-19 in Libby

More than 20 new COVID-19 cases in Lincoln County are tied to the interactions of a community of people in Libby, a health official said Monday.

The state's data dashboard also reported two additional deaths, for a total of 34.

Amid a mish-mash of guidance about how Montana schools should handle the upcoming school year as the COVID-19 pandemic continues, there's been…

In this photo taken May 17, 2020, a handful of people meet at the Peace Arch in Peace Arch park, between the U.S. and Canada, in Blaine, Wash. (AP Photo/Elaine Thompson)

Emigrant Peak is seen rising above the Paradise Valley and the Yellowstone River near Emigrant in this Oct. 8, 2018, file photo.

FILE - In this May 18, 2020 photo, visitors watch as Old Faithful erupts on the day the park partially reopened after a two-month shutdown due to the coronavirus pandemic, at Yellowstone National Park, Wyo. Lawmakers have reached bipartisan agreement on an election-year deal to double spending on a popular conservation program and devote nearly $2 billion a year to improve and maintain national parks. (Ryan Dorgan/Jackson Hole News & Guide via AP, File)