RAPID CITY, S.D. — The South Dakota attorney general said in a statement Monday night that he and the local sheriff searched a crash scene after he thought he hit a deer Saturday night but they both missed spotting the pedestrian he had hit and killed.

Jason Ravnsborg said he used Hyde County Sheriff Mike Volek’s personal vehicle to drive home to Pierre and then returned it to Highmore the next day.

As he passed by the crash scene Sunday morning, Ravnsborg said he stopped to look for the deer but instead found the body of Joe Boever, a 55-year-old man from Highmore.

Instead of calling 911 Ravnsborg drove to Volek’s house “to report the discovery,” leaving Boever on the side of the highway where he had been since 10:30 p.m. the night before.

Ravnsborg shared this information and other details in a statement written on the letterhead of the Office of Attorney General and sent from his campaign email address.

Ravnsborg sent the email at 10:07 p.m. Central Time without the knowledge of his office’s chief of staff/spokesman.

“I have not seen what you are talking about,” Tim Bormann said Monday evening. “I have not prepared a press release.”

Bormann — who answered questions earlier Monday about the incident — said Monday night that he’s no longer issuing any statements about it and that Ravnsborg is working with a new spokesman on this issue.

Mike Deaver, who lives in Salt Lake City, said he’s a “friend of Jason’s" and also did not now about Ravnsborg's statement.

Deaver said he works for the Strategies 360, a Seattle-based communications firm. He said he has discussed the incident with Ravnsborg, but they have not yet talked about payment for his services. 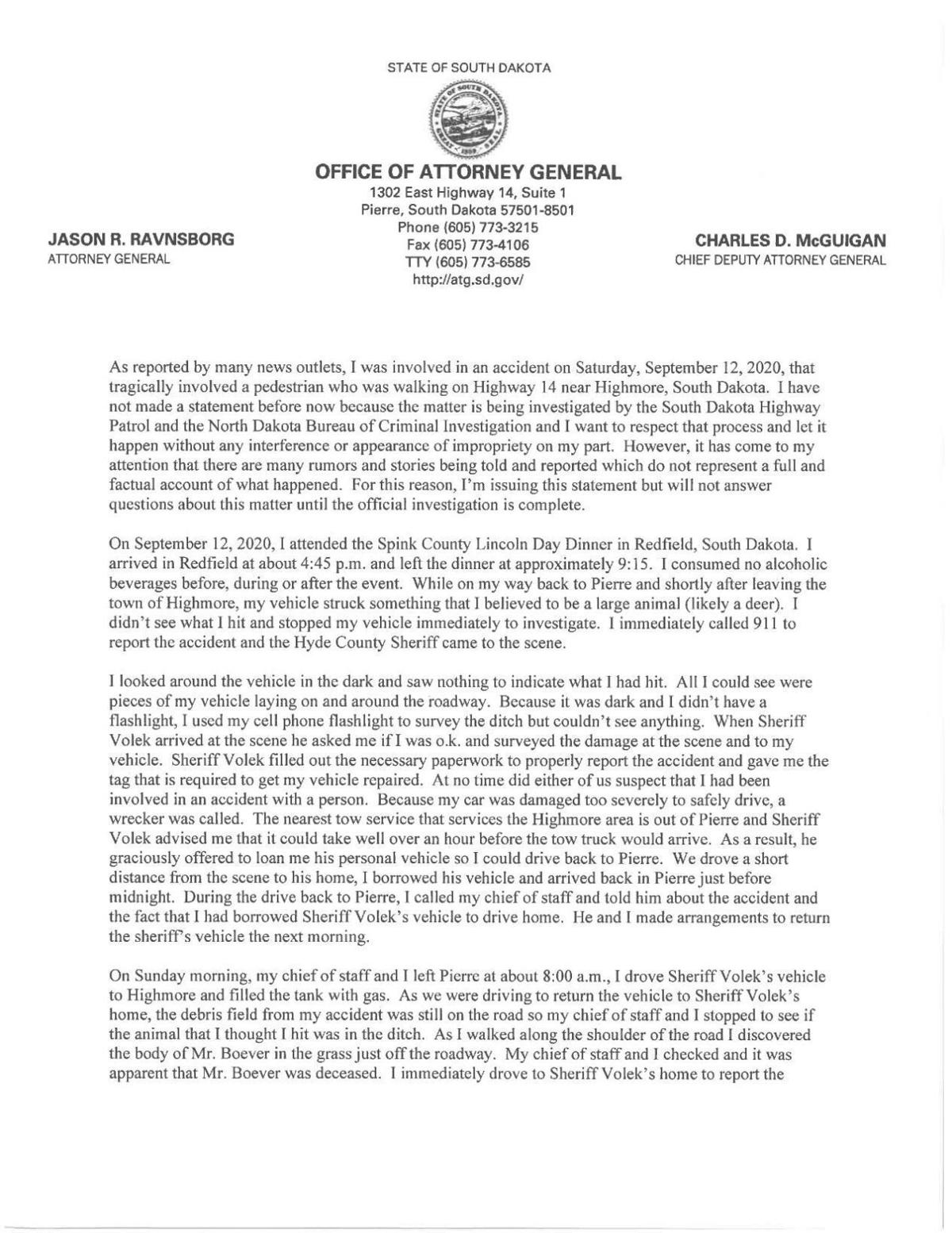 Ravnsborg said he wrote the statement to address the “many rumors and stories being told and reported which do not represent a full and factual account of what happened.”

The attorney general said he arrived at the Spink County Lincoln Day Dinner in Redfield around 4:45 p.m. Saturday and left around 9:15 p.m. The event was held at Rooster’s Bar and Grill, according to the website of the South Dakota Republican Party.

“I consumed no alcoholic beverages before, during or after the event,” Ravnsborg wrote.

He said he called 911 after he hit something that he “believed to be a large animal (likely a deer)” shortly after passing through Highmore. The crash occurred around 10:30 p.m. on U.S. Highway 14 just west of the town, according to the Highway Patrol.

“I looked around the vehicle in the dark and saw nothing to indicate what I had hit,” Ravnsborg wrote.

Ravnsborg said he only saw pieces of his vehicle lying around the road and he used the flashlight on his cell phone to look in the ditch.

He said Volek arrived, inspected his car and the area, filled out accident paperwork, and gave him a tag required to get his vehicle repaired.

“At no time did either of us suspect that I had been involved in an accident with a person,” Ravnsborg said.

Ravnsborg said his vehicle was too damaged to drive home so he called the nearest tow service, which is in Pierre.

Volek “graciously offered to loan me his personal vehicle so I could drive back to Pierre” after saying it would take more than an hour for the tow truck to arrive, Ravnsborg wrote.

The attorney general said he called Bormann to tell him about the crash and that he was driving Volek’s car back home. Ravnsborg said he arrived in Pierre around midnight.

Ravnsborg said he drove Volek’s car back Sunday morning and Bormann went with him. He said he noticed debris was still present at the crash site so he and Bormann stopped to see if they could find what he hit.

“I discovered the body of Mr. Boever in the grass just off the roadway,” Ravnsborg wrote.

The attorney general said he and Bormann checked on Boever and it was obvious he was dead.

“I immediately drove to Sheriff Volek’s home to report the discovery and he accompanied me back to the scene,” Ravnsborg wrote.

He said Volek said he would “handle the investigation” and told him to return to Pierre.

Ravnsborg said he’s cooperated with the investigation by providing a blood sample, letting officials search his two cell phones, and sharing the names of people at the dinner who could confirm that he didn’t drink alcohol. He said he was also interviewed about the incident.

“I am deeply saddened by the tragic nature of these events and my heartfelt condolences go out to the Boever family,” Ravnsborg said.

The attorney general said he would not be answering any questions from the media until the investigation is complete. ​

South Dakota Gov. Kristi Noem said Tuesday that she was bringing in outside investigators to look into how the state's top prosecutor struck and killed a man with his car.

South Dakota AG told 911 he hit 'something' in fatal crash

South Dakota Attorney General Jason Ravnsborg told a 911 dispatcher that he had hit “something” in the middle of the road the night he struck and killed a pedestrian, according to a recording of a 911 call authorities released Tuesday.

South Dakota Attorney General Jason Ravnsborg was distracted before he drove onto a highway shoulder where he struck and killed a pedestrian in September, state Secretary of Public Safety Craig Price said Monday.