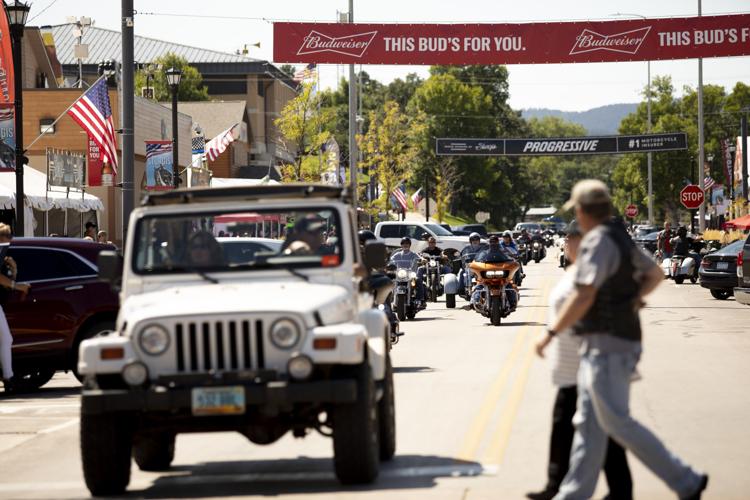 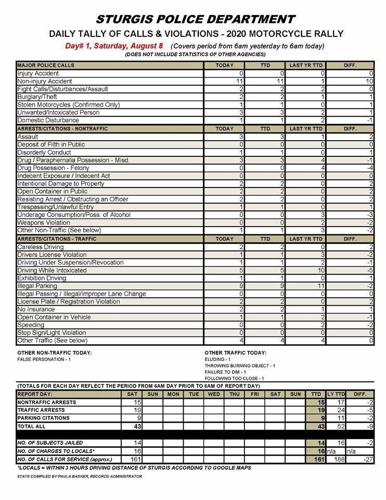 Sturgis Police Chief Geody VanDewater said his department is down by 27 calls overall, although there's been an increase in non-injury accidents.

According to information the department released this morning, there were 11 non-injury accidents as of 6 a.m. Friday and 6 a.m. Saturday. Last year there was one.

Meade County Sheriff's Ron Merwin said they had 21 people move through the county jail, which is one short of last year.

"We're running pretty even," he said.

Those arrested are going through the courthouse basement jail rather than the general population county jail. He said people taken in go through COVID-19 screening.

The only difference this year is that judges have agreed to be on call every night, so about 98% of those brought in, if they have a .06 or below alcohol limit, are bonded out and return to court the following day.

Merwin said the majority of cases have been for reckless driving and DUI.

State Highway Patrol Capt. Jason Ketterling said the number of crashes has picked up since Friday, but that it's still comparable to last year.

He said the state has seen more motorcycle fatalities than previous years, but there's not necessarily a concrete conclusion that can be drawn.

Ketterling said the Department of Transportation will release it's traffic numbers starting Monday.

All departments said their officers are equipped with personal protective equipment.

Battle Creek Fire Department announced on Facebook Saturday that it responded to two additional motorcycle wrecks since two from Friday. The department cautioned motorcyclists to keep the difficulty of roads in the Black Hillls in mind and to not "overdrive your skill/experience."

"We want everyone to come out here and have a great time, and to enjoy what the Black Hills have to offer," the posts reads. "We just want you to get home safely even more."

Arrests down but spending up at Sturgis Motorcycle Rally, local officials say

Arrests are down a bit, but spending appears to be up at this year’s Sturgis Motorcycle Rally, according to local officials.

Vehicle traffic counts for the first three days of the Sturgis Motorcycle Rally are down just 3.8% compared to 2019.

Vandoliers perform in Billings in 2019.