SIOUX FALLS, S.D. — A surge of coronavirus cases in Wisconsin and the Dakotas is forcing a scramble for hospital beds and raising political tensions, as the Upper Midwest and Plains emerge as one of the nation's most troubling hot spots.

The three states now lead all others in new cases per capita, after months in which many politicians and residents rejected mask requirements while downplaying the risks of the disease that has now killed over 210,000 Americans.

"It's an emotional roller coaster," said Melissa Resch, a nurse at Wisconsin's Aspirus Wausau Hospital, which is working to add beds and reassign staff to keep up with a rising caseload of virus patients, many gravely ill.

"Just yesterday I had a patient say, 'It's OK, you guys took good care of me, but it's OK to let me go,'" Resch said. "I've cried with the respiratory unit, I've cried with managers. I cry at home. I've seen nurses crying openly in the hallway."

The efforts to combat the quickening spread of the virus in the Midwest and Plains states are starting to recall the scenes that played out in other parts of the country over the past several months.

In the spring, New York City rushed to erect field hospitals as emergency rooms were flooded with desperately ill patients. Then, as Northeastern states got a handle on the outbreak, it spread to Sun Belt states like Arizona, Texas and California over the summer. It then moved into the Midwest.

"What worries me is we haven't learned our lessons," said Ali Mokdad, a professor of health metrics sciences at the University of Washington in Seattle. He cited data, compiled by the company Premise, showing mask usage at 39% in Wisconsin and 45% in the Dakotas, both below the U.S. average of 50%.

"People let down their guard. They said, 'It's not us. It's big cities,'" Mokdad said. "But eventually, like any other virus, it's going to spread. Nobody lives in a bubble in this country."

In North Dakota, which does not require residents to wear masks and whose 770 new cases per 100,000 residents are the highest in the country, 24 more deaths were reported Wednesday, triple the state's previous single-day record.

"The reported number of deaths today is heartbreaking," said state Health Department spokeswoman Nicole Peske said. "Unfortunately, the deaths and the increase in cases in long-term care are a direct reflection of what's happening in the community."

In Wisconsin, health officials plan to open a field hospital next week at the state fairgrounds to prevent health care centers from being overwhelmed by virus cases, even as state Republicans challenge Democratic Gov. Tony Evers' mask mandate in court.

"We hoped this day wouldn't come, but unfortunately, Wisconsin is in a much different, more dire place today, and our health care systems are beginning to become overwhelmed," Evers said.

The state surpassed 3,000 new virus cases for the first time on Thursday, more than 200 above its previous daily record, set earlier this month.

South Dakota set records Thursday for active cases, hospitalizations and new deaths, with 14. A small hospital that serves the Cheyenne River Sioux Tribe transferred two virus patients out of state after administrators at 14 other facilities said they were diverting patients.

That contradicted assurances by Gov. Kristi Noem, a Republican whose plan for combating the virus has focused on increasing treatment capacity rather than preventing infection. Noem, who has insisted since the spring that the spread of the disease was inevitable, has come under growing criticism.

"It is the height of arrogance and ignorance for her to claim her inaction is a badge of honor," state Democratic Party chairman Randy Seiler said.

Despite the rising numbers, Kathleen Taylor of Redfield, South Dakota, said she sees a lot of apathy in the community of about 2,300. For months, the town had been largely spared by the pandemic. But now, she said, she knows 14 people who have tested positive.

"I watch the governor tell people how marvelously we are doing and how relying on people's own sense of responsibility has worked," said Taylor, a 67-year-old author. "Then I go into town and I see maybe three people wearing masks and nobody distancing."

Iowa on Thursday reported over 1,500 new confirmed cases over the previous 24 hours and a record 449 people hospitalized. A report issued by the White House coronavirus task force said the state has seen high transmission of the virus over the past month, with "many preventable deaths."

The report came a day after Republican Gov. Kim Reynolds urged residents not to let the virus dominate their lives, echoing the words of President Donald Trump. Reynolds, who has rejected health experts' repeated recommendations that people be required to wear masks, bristled Wednesday when asked why she hadn't done more to reduce virus spread.

"We are doing a lot, and I'm proud of what we're doing, but you know what? Any death is one too many, and it's heart-wrenching to see the numbers, but I have to balance a lot," she said.

Nationwide, newly reported cases have risen in recent weeks to about 44,000 a day, and deaths are running at around 700 a day, according to a tally by Johns Hopkins University.

While those numbers are down from the spring, when cases and deaths peaked at much higher levels, public health experts warn that infections are far too high as the nation moves toward flu season and colder weather that will send more people indoors, where the virus can spread more easily.

"We really need to figure out how to be engaged with one another socially but physically distant," White House coronavirus response coordinator Dr. Deborah Birx said Thursday in Hartford, Connecticut. "I think that it's going to be a critical message through the fall. It will protect us against flu, and it will protect us against COVID if we keep up those behaviors."

Photos: Look inside the Wyoming Public Health Laboratory, where COVID-19 samples are tested

North Dakota legislative candidate died of COVID-19; path could be complicated if he wins

A Bismarck-area legislative candidate who has died just weeks before the conclusion of the general election succumbed to COVID-19.

There have now been more than 6,000 confirmed cases reported in the state.

Cases of COVID-19 and hospitalizations related to the coronavirus disease have taken big jumps in North Dakota, and 11 more people have died, according to state data released Friday.

Kristi Noem on Tuesday blamed South Dakota's recent surge in coronavirus cases on an increase in testing, even as the state saw a new high in the number of people hospitalized by the virus. 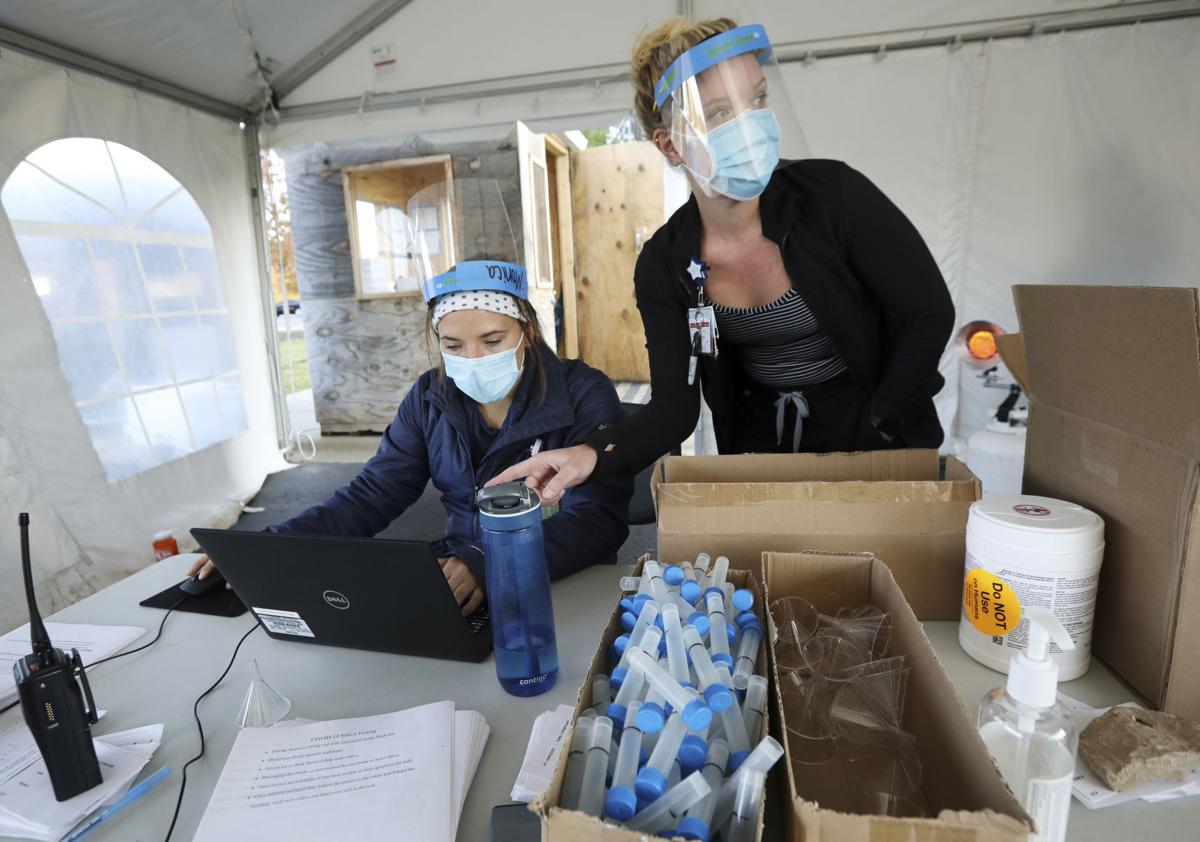 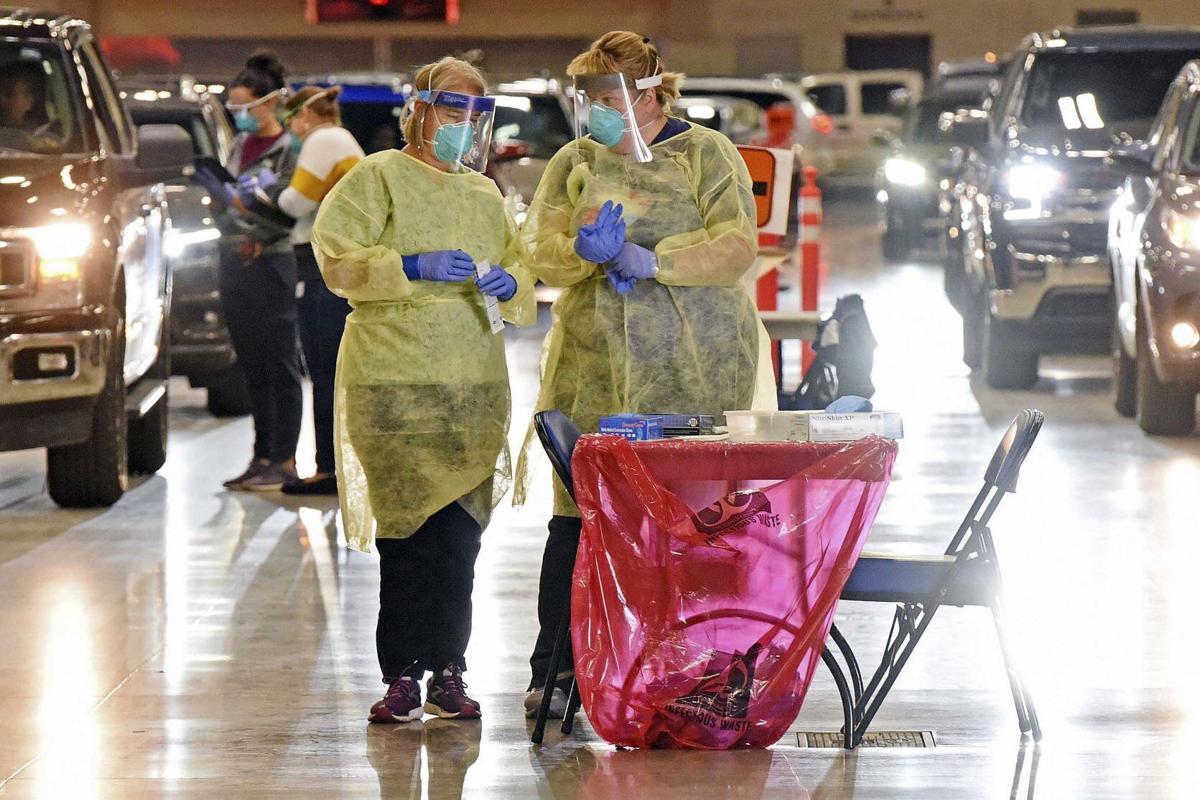 In this Sept. 8, 2020, file photo, Bismarck-Burleigh Public Health nurses Crys Kuntz, left, and Sara Nelson confer inside the Bismarck Event Center in Bismarck, N.D., where vehicles were lined up for the weekly drive-thru COVID-19 testing. 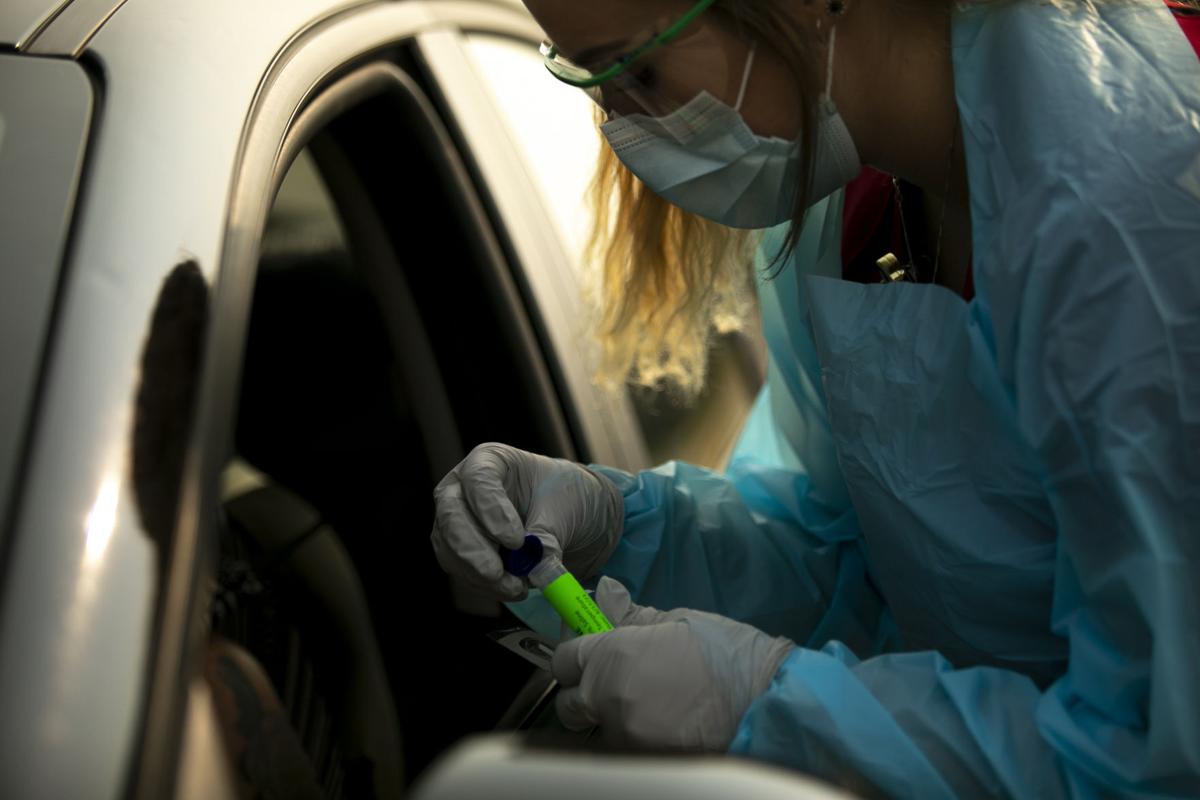 In this Aug. 24, 2020, file photo, Lindsey Helkenn, a medical lab technician from Spearfish, conducts a COVID-19 test in Sturgis, S.D. 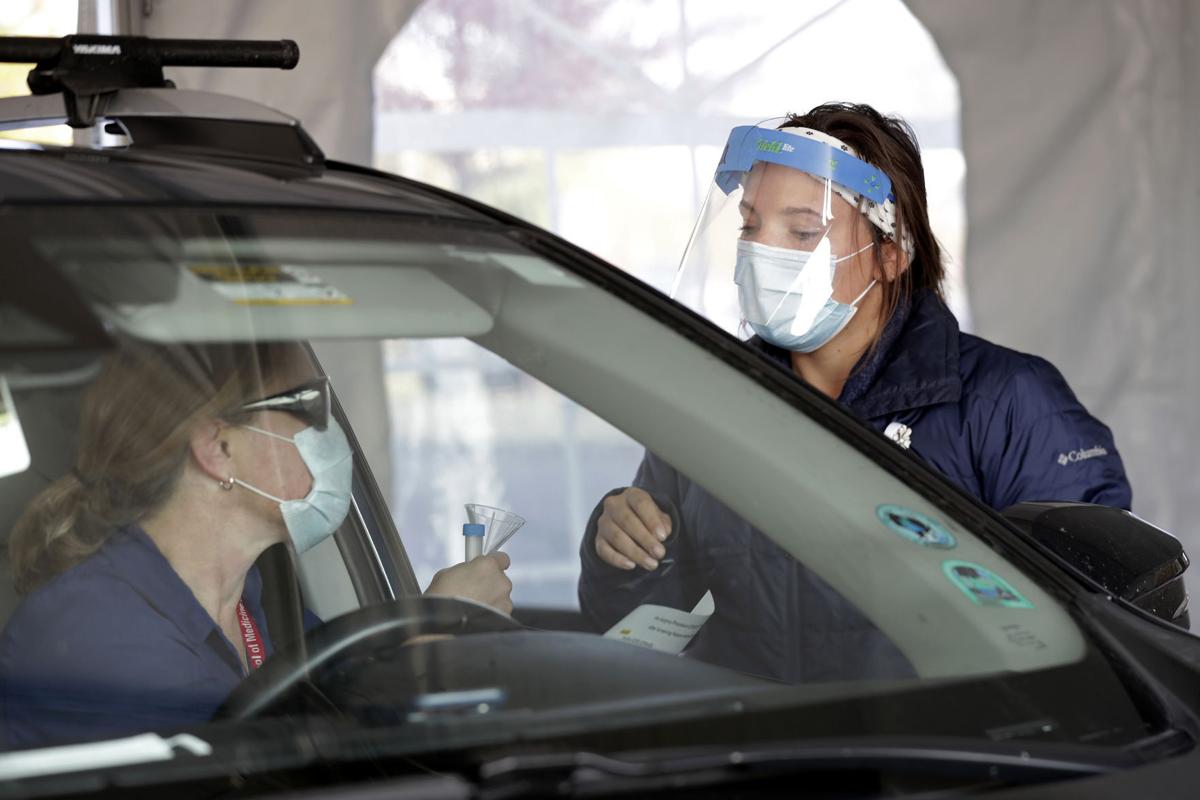 Nursing assistant Monica Brodsky, right, hands over a funnel and vial for a saliva test, that tests for COVID-19, to Janet Legare.