For tourists traveling to Yellowstone National Park as it reopens its southern loop on Wednesday morning, here’s what you can expect.

The North Entrance at Gardiner and Northeast Entrance near Silver Gate and Cooke City remain closed for now, following unprecedented flooding on June 13 that consumed portions of park roadways making them impassable. All park visitors were evacuated the night of June 12.

Chuck Sams III, the National Park Service director, said in a Sunday press conference in Gardiner that his agency realizes it’s important to get the two entrances reopened as quickly as possible.

Yellowstone Superintendent Cam Sholly said officials are looking for “temporary solutions” to reconnect Cooke City and Silver Gate “as quickly as possible while we work on a permanent, long-term solution.” Within the next week the Park Service should have timelines for the completion of all of the work, the officials said.

The map above displays areas in Yellowstone National Park that have seen damage from flooding activity, as well as what roads are open, closed, or under construction. On the map, click the icon to the left of the map title "Yellowstone National Park: what's open, what's closed," for a full menu explaining the icons. Generally speaking, blue highlights represent the routes that will open on June 22, and orange routes are closed.

Some roads less severely damaged in the north loop should be reopened within the next two weeks or less, Sams announced.

“Which will give the American public 80% access to the park,” he added. “The work that they’re doing is just phenomenal. What I saw today by the staff and our partners, and to be able to announce with strong confidence that within the next two weeks that we’ll have the northern loop open, is very exciting for all of us.”

The north loop roads that will be open include the route from Norris to Mammoth, Mammoth to Roosevelt and Tower Fall. There will be limited services when these sites reopen. Mammoth Hotel has been closed for the season.

In the meantime, only license plates ending in an even number, or zero, will be admitted to Yellowstone on even numbered days. This also applies to all motorcycles. If your plate ends in an odd number, or you have a vanity plate, you can enter only on odd days.

The Park Service will make an exception if visitors have a hotel, campground or backcountry reservation for that night. Here’s another catch: Backcountry areas accessible from roads will be open to the public for day use only until July 1. From July 1 on, overnight use will be allowed from some southern loop trailheads.

All commercial tour buses can enter no matter the day, in addition to any service vehicles, like mail or food delivery, contractors and employees.

Even though visitors will be able to drive this loop, there are some temporary closures in effect. These include: Canyon Village Lodges & Cabins; campgrounds at Canyon, Madison, Norris and Lewis Lake; and Fishing Bridge Visitor Center and Trailside Museum.

To reconnect Gardiner to Mammoth at the North Entrance the Park Service has shifted a contractor from another job inside the park to work on building an entirely new road. With a hurry-up timeframe the road may be open in two months. The route will be away from the Gardner River and closer to an existing service road, known as the Old Gardiner Road.

“It’s about as fast as you can mobilize a plan for a new road and those kind of construction assets,” Sholly said.

At some point, commercial operators of tours in Gardiner should be able to get up the road before it is completely finished and opened to the public, Sholly added.

Opening the old road to all visitors would make it too difficult for crews building the new route to operate, he added.

Assessments are being made to re-establish some type of access to Yellowstone at the Northeast Entrance, but the road between the gate and Tower-Roosevelt suffered damage in six places where the road may have to be rerouted away from Soda Butte Creek and the Lamar River to ensure the repairs are more resilient to any future flooding.

“We’re looking at less than three miles of really major damage,” Sams said, noting he had flown over the park to examine the destruction. “But it just happens to be in the most critical points within the river system that’s really going to take us a lot of time to be able to rebuild those roads in a way that they will have that resiliency and adaptation built into it.”

“There are three sections that are majorly impacted,” Sholly said. “Some of them might be easy to bypass the damage, a couple are going to be complicated.”

Sholly stressed that even with the temporary closures up north, much of the park will be open to the public. He noted there are 1,750 acres of roads spread across the park’s vast 2.2-million acre landscape. Most people, he added, never get more than a half-mile from their vehicle during a visit.

“We are going to look very, very carefully where we reconstruct, how that looks, what’s the future look like, not making bad investments and, I can’t tell you exactly what that looks like right now, but we’ll have some good alternatives to look at moving forward,” he said.

Sams said the Park Service is “putting every effort into” reconnecting Yellowstone’s roadways. He added that the support of the region’s congressional delegations and the House and Senate appropriation arms will help direct money and personnel to the repairs.

“But we need to do those assessments so we can clearly tell them what that’s going to cost,” Sams said.

Federal officials say most of Yellowstone National Park should reopen within the next two weeks. Record floods pounded the region last week and knocked out major roads. Yellowstone's superintendent said the park will be able to accommodate fewer visitors for the time being, and it will take many months to re-connect the world-renowned park's roads with some southern Montana communities. Yellowstone will partially reopen at 8 a.m. Wednesday. Only portions of the park that can be accessed along its “southern loop” of roads will be opened initially and access to the park’s scenic backcountry will be for day hikers only. Within two weeks officials plan to also open the northern loop.

What happens when one of the country's biggest tourist attractions suddenly closes?

Tourists who waited years to see Yellowstone found themselves stranded outside its gates. Businesses that rely on park tourism are already losing money. No one is sure when the park will reopen.

🎧 Historic floods, earning extra money and the top news of the week. Here are our latest podcast episodes!

The work will be fast-tracked by $50 million in emergency funds from the Federal Highway Administration and the diversion of a construction crew from work near Old Faithful. 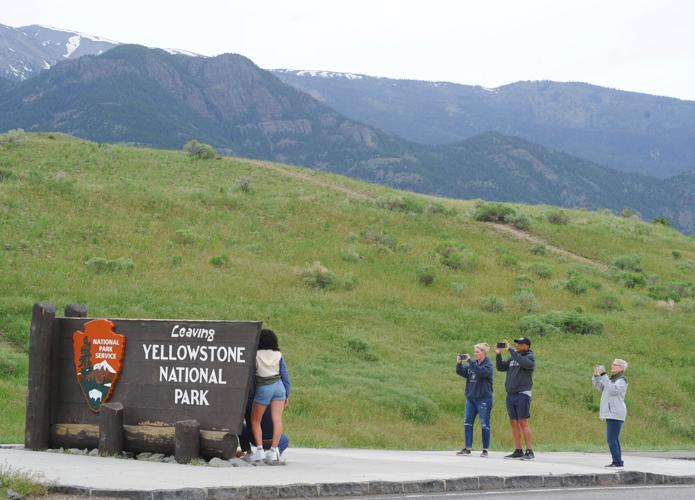 Visitors in Gardiner pose for a photo at the sign before the North Entrance to Yellowstone National Park on June 19. The road from Gardiner into the park has been closed since June 13 following a serious flood that damaged the road to Mammoth Hot Springs, Wyoming. But the Park Service has reopened travel to parts of the park's north. 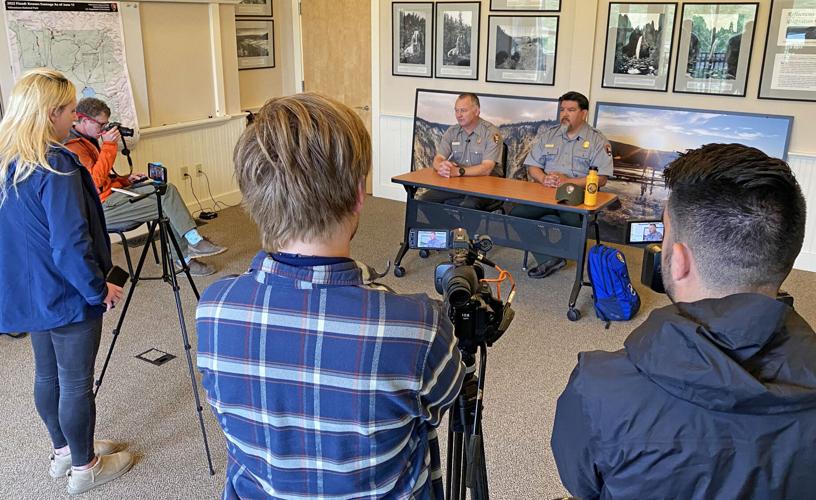 Members of the regional press gather on Sunday in Gardiner for an update from Yellowstone Superintendent Cam Sholly, at left, and National Park Service Director Chuck Sams III. 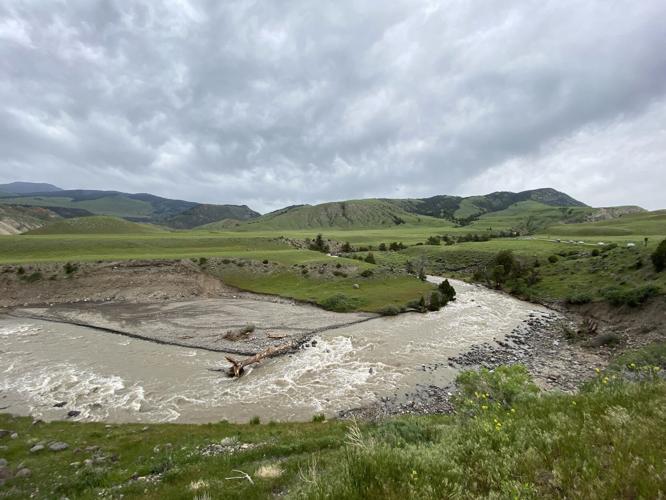 A new beach was scoured along land next to the Gardiner River near Yellowstone National Park's North Entrance during an historic flood that swept through the region on June 13. 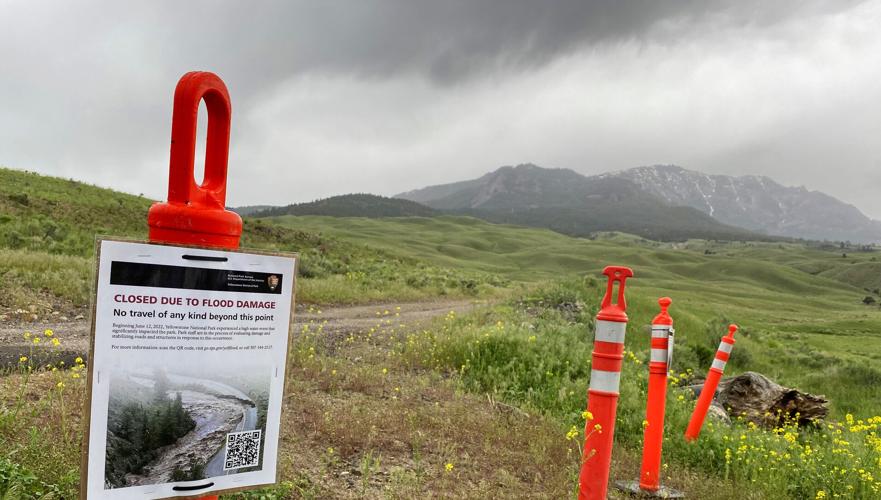 Signs and construction cones block the route up the Old Gardiner Road between Gardiner and Mammoth Hot Springs, Wyoming. The road will be rebuilt over the next two months to provide access via the North Entrance, replacing the old road that was damaged by floodwaters.