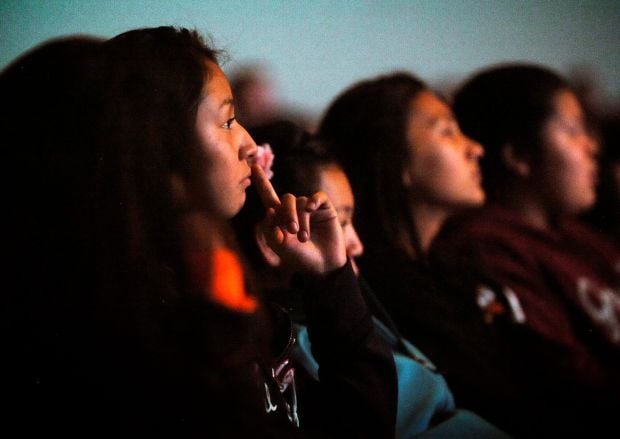 In this file photo, students from St. Charles School in Pryor watch as performers put on the opera “La Traviata” at the Alberta Bair Theatre in Billings in 2014. 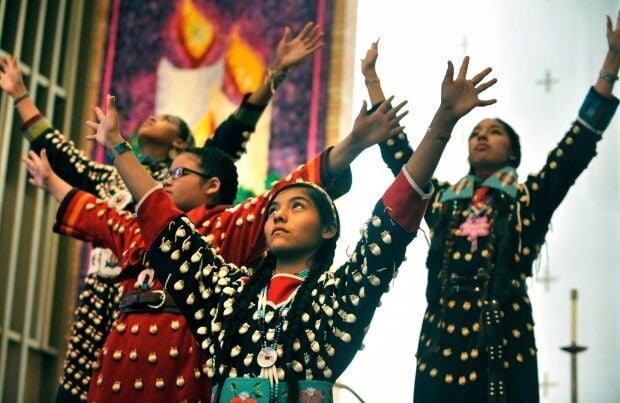 In this file photo, students from the St. Charles Indian Mission School in Pryor sign the Lord's Prayer using Native American sign language at the First Congregational United Church of Christ in Billings in 2013.

MELINDA YOUNG For The Billings Gazette

The small private Catholic Church-run school is on the reservation in Pryor about 35 miles south of Billings.

Crow leaders were among those gathered Thursday for a meeting that included representatives from the U.S. Department of Justice and the American Civil Liberties Union of Montana.

The meeting was prompted by the principal’s response to a girls basketball game in November between St. Charles and Roberts Junior High.

The game in Roberts, which St. Charles won, had gotten physical and emotionally charged. A Roberts player was knocked down during aggressive play, and at one point a Roberts fan ran onto the court confronting referees.

Following the game, someone from the St. Charles team wrote a profane message on a school white board and the team left the locker room in disarray.

It was Rashkow’s response to that conversation, however, that most alarmed Crow leaders.

Rashkow had girls from the St. Charles team pulled from class and loaded onto a school bus for a trip to Roberts to apologize one by one to members of the Roberts team.

Some parents and guardians of members of the St. Charles team saw the forced apologies as a public shaming, and were upset the girls were bussed off the reservation without their knowledge.

Even Ator, the Roberts superintendent, thought Rashkow’s response was over the top.

"As far as the decision to put the students on the bus and bring them to Roberts, I found that highly uncomfortable, and it would not be the administrative approach I would have gone with," Ator said.

The purpose of the Thursday meeting with tribal, school and civil rights leaders was to “uplift the voices of impacted community members and hear about their experiences," said Angeline Cheek, Indigenous Justice Organizer with the ACLU Montana in Missoula.

Cheek heard about the basketball team incident from Crow community members and is continuing to monitor the situation.

In addition to the apology trip, Rashkow also had two St. Charles Mission players suspended, and kicked 13-year-old Lovae Bull Chief off the team. It was Lovae who had knocked down the Roberts player, an incident Lovae calls an accident.

"She was pushing me and told me to get out of the f-ing way,” Lovae said. “And, I thought she was going to push me, so I pushed her back and my hand hit her neck and she fell to the ground.”

Carol Good Luck, Lovae’s guardian and grandmother, said the forced trip to Roberts and the apologies humiliated the St. Charles girls. It has also made Lovae unhealthy, she said.

After the apology trip, Good Luck said Lovae began obsessing about the incident and felt she couldn't breathe. She now meets with a counselor.

"Lovae got really depressed and has been sleeping a lot, withdrawing from family," Good Luck said. "Her appetite is not good and she blamed herself. She also was hyperventilating and thought she was going to have a heart attack."

Jason Kills Pretty Enemy, a senator representing the tribe’s Arrow Creek district, went even further, saying the trip to Roberts caused a trauma the girls may carry for a lifetime. He’s one of the Crow senators advocating to ban Rashkow from the reservation, which would essentially also bar her from the mission school.

"Our Crow youth were driven off the reservation, out of the county, and then made to apologize, and this was done during school hours," he said. "That part is unheard of."

Members of the Crow community already deal with daily challenges, including having to travel more than 30 miles to the nearest grocery store. Their students historically have endured deprivations and multiple families may share one home, added Sampson DeCrane, also a senator for the Arrow Creek district.

"We're tired of being treated like second-class citizens, that we're less than," DeCrane said.

The COVID pandemic has been especially brutal in Indian Country where the death rate has been much higher than in the non-native population. That’s been true on the Crow Reservation, too, added Kills Pretty Enemy.

So, school teachers and administrators should do everything they can to help protect students' emotional health at this time, Kills Pretty Enemy said.

"The principal took away their safe haven, a school where students should feel safe and feel free to learn without being devalued," he said.

Ozzie, the oldest male gorilla in the world, dies at Atlanta Zoo

New radio image of the Milky Way is gorgeous

New radio image of the Milky Way is gorgeous

US announces $83M in latest round of tribal housing grants

The latest infusion — $83 million — will benefit 74 tribes across the country and boost the total amount awarded so far to $209 million spread among 191 tribes.

In this file photo, students from St. Charles School in Pryor watch as performers put on the opera “La Traviata” at the Alberta Bair Theatre in Billings in 2014. 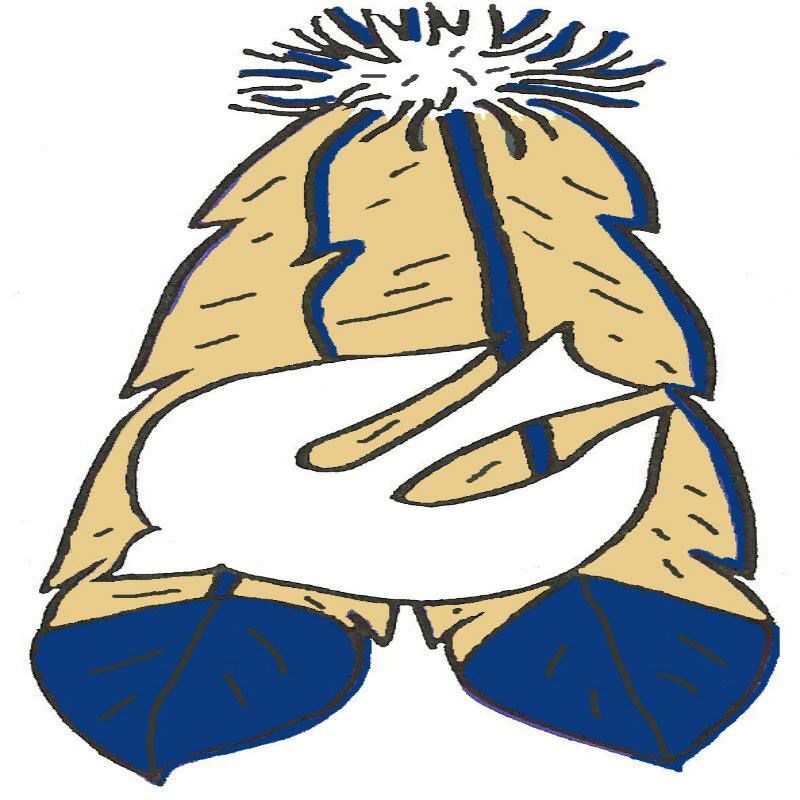 In this file photo, students from the St. Charles Indian Mission School in Pryor sign the Lord's Prayer using Native American sign language at the First Congregational United Church of Christ in Billings in 2013.