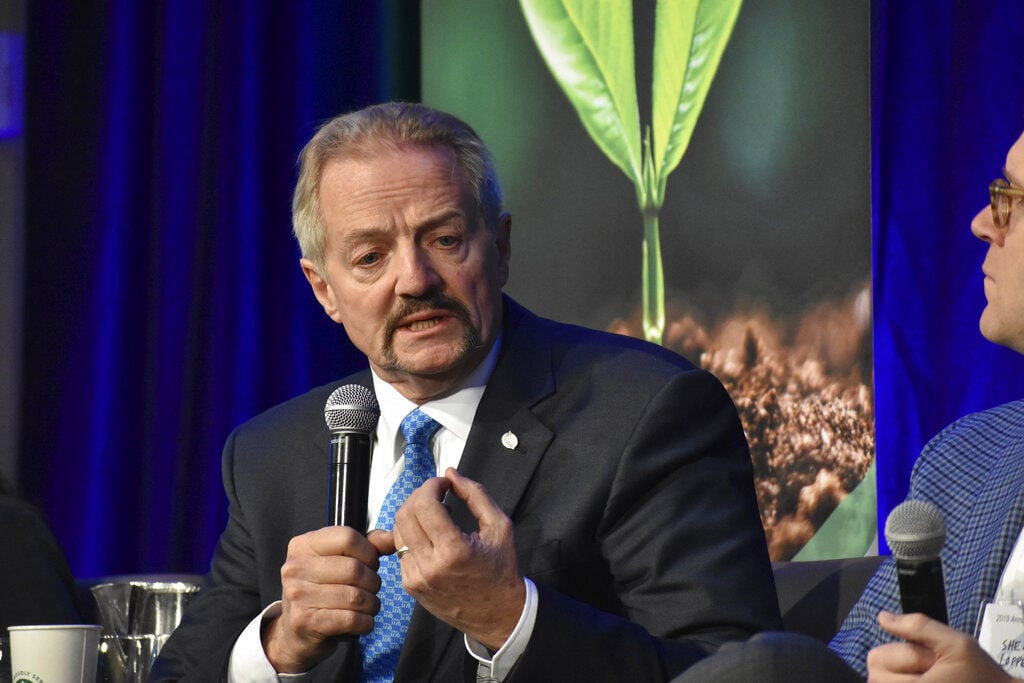 In this Oct. 11, 2019 photo, U.S. Bureau of Land Management Acting Director William "Perry" Pendley speaks at a conference. A new report from the Government Accountability Office faulted the Trump administration for ordering 170 of the agency's Washington D.C.-based employees to relocate to a new BLM national headquarters in Colorado. 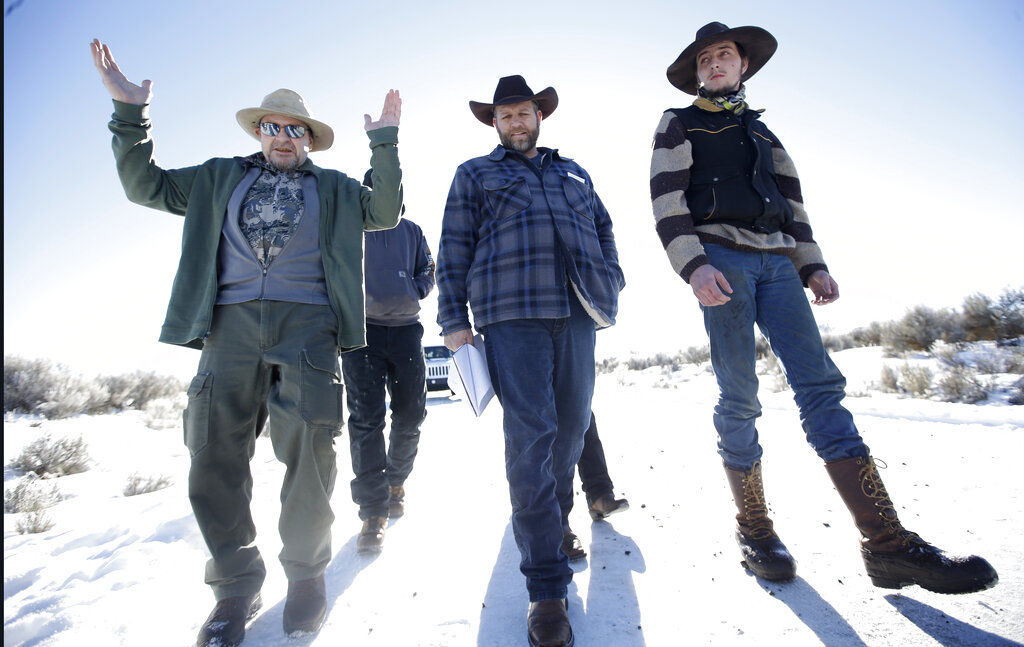 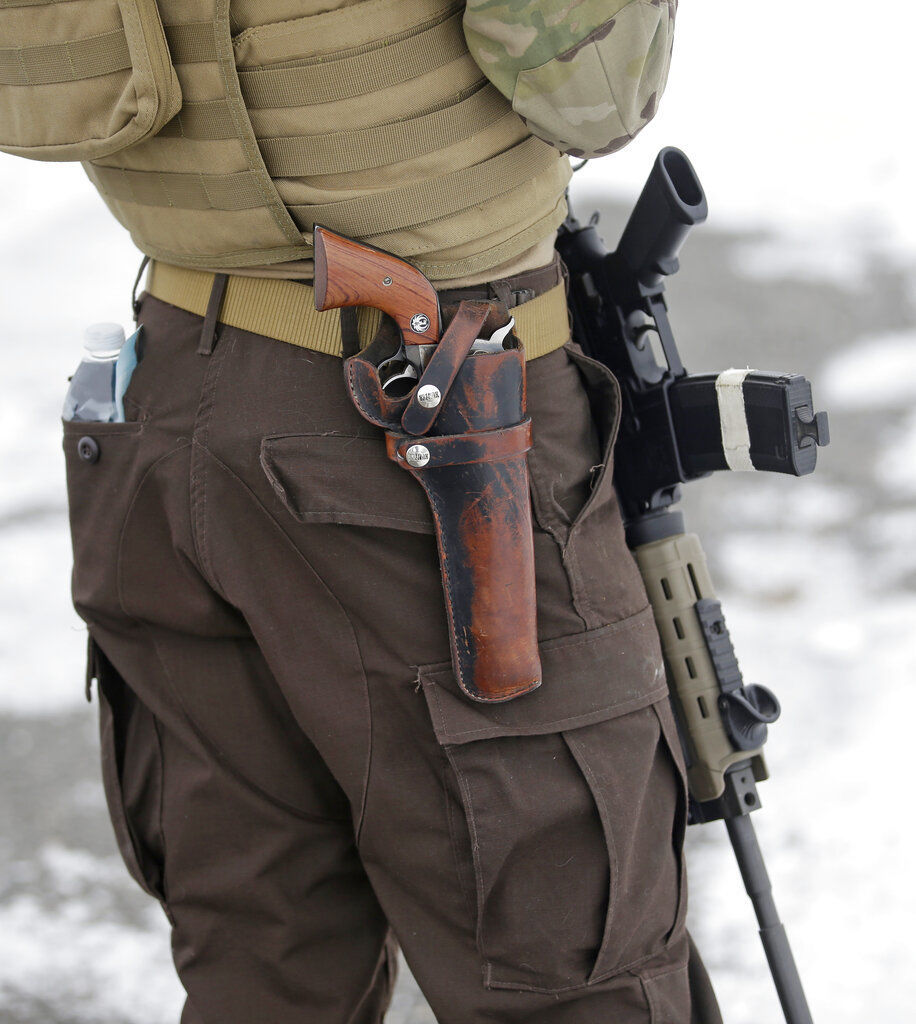 In this Jan. 9, 2016, file photo, a man stands guard after several organizations arrived at the Malheur National Wildlife Refuge near Burns, Ore. A new report from the Government Accountability Office highlights violence against public lands employees amid heightened tensions with anti-government groups.

The Government Accountability Office in a new report highlights anti-government tensions that at times have boiled over, including a six-week armed occupation of a federal wildlife refuge in Oregon in 2016 and other standoffs with armed protesters in Montana and Nevada.

The clashes have been rooted in a deep distrust of government on the part of the protesters, who view the federal bureaucracy as unlawfully impeding people from using public land for grazing, mining and other economic purposes.

Even a routine traffic stop or the collection of a park entrance fee can be enough to trigger an assault or threat, according to GAO investigators.

The incidents investigators cataloged during interviews with federal workers ranged from threatening phone calls and gunshots fired over the heads of employees, to the stabbing of a Bureau of Land Management worker outside a federal building.

Some of the assaults triggered FBI domestic terrorism investigations, although the precise number was not disclosed because it was considered sensitive information.

The report did not say whether rates of assaults and threats were increasing. But it noted a dwindling number of federal officers patrolling the nation's vast forests, parks, wildlife refuges and other open spaces, which cover more than 670 million acres primarily in 12 Western states.

The report cited a 19% drop in the ranks of officers at the U.S. Forest Service between 2013 and 2018 The Bureau of Land Management saw a 9% drop and now has one officer in the field for every 1.2 million acres the agency oversees.

The GAO investigation faulted officials at U.S. land agencies for failing to come up with plans to assess the security of government facilities, leaving employees at greater risk.

The findings will be addressed by lawmakers during a hearing Tuesday before the House Subcommittee on National Parks, Forests and Public Lands. Witnesses include Anne-Marie Fennell, who directs the GAO's natural resources and environment team.

A Forest Service official said increased awareness about employee security — fueled by high-profile standoffs with protesters — may have contributed to additional reporting of potential threats.

But the service's internal data does not show any change in the rate of assaults and threats, said Forest Service spokeswoman Babete Anderson. She added that government workers have "millions of contacts and interactions with members of the public each year...that are peaceful and uneventful."

In a formal response to the GAO report, Interior Department Assistant Secretary Scott Cameron agreed with recommendations to carry out security assessments at hundreds of government facilities. Forest Service Chief Victoria Christiansen also agreed with the recommendation for security review.

Neither gave details on when the security work would occur.

"Our highest priority is the safety and well being of our employees and visitors on our public lands," said Interior Department spokeswoman Melissa Brown.

The security review was requested by U.S. Rep. Raul Grijalva, an Arizona Democrat and chairman of the natural resources committee. It covered four agencies: the Forest Service, BLM, Fish and Wildlife Service and National Park Service.

"Making a folk hero out of Bundy, that sets a dangerous precedent," Grijalva said. "At the top of the agency, they reinforce and embolden some of these actions by doing nothing and previously being in support of them."

Pendley, a former property rights attorney, routinely lambasted federal bureaucrats prior to his appointment in July and warned of another populist "Sagebrush Rebellion" if the government didn't open more Western lands to development.

The original Sagebrush Rebellion of the 1970s was a period of intense mistrust between some ranchers and federal land managers. It arose in part from court rulings that said public range land was being overgrazed, ushering in new restrictions for the livestock industry.

Pendley now calls his past anti-government statements irrelevant. He told The Associated Press in a recent interview that the Trump administration has helped quell any rebellion by giving more deference to states on natural resource development.

Professor John Freemuth, an expert on U.S. land policies at Boise State University, said it was true that the Trump administration's pro-development policies could help quiet resentments toward the government. But Freemuth added that anti-government rhetoric also gets legitimized when it's espoused by prominent figures.

"Sometimes it's hard to be a federal employee," he said. "There seems to be a general hostility that bubbles around."

Ultra luxury is coming to one of the three private clubs in Big Sky.

Completing construction of the new U.S. Highway 212/310 project from Laurel to Rockvale will be a priority among projects discussed Wednesday …

Dark clouds gather over distant mountains. Mosquitoes and flies hum into and out of view and the wind blows steadily through the dry prairie grass.

Where to begin in responding to activist Eric Molvar’s venomous diatribe (Jan. 5 guest opinion) regarding, generally, President Trump and Secr…

In this Oct. 11, 2019 photo, U.S. Bureau of Land Management Acting Director William "Perry" Pendley speaks at a conference. A new report from the Government Accountability Office faulted the Trump administration for ordering 170 of the agency's Washington D.C.-based employees to relocate to a new BLM national headquarters in Colorado.

In this Jan. 9, 2016, file photo, a man stands guard after several organizations arrived at the Malheur National Wildlife Refuge near Burns, Ore. A new report from the Government Accountability Office highlights violence against public lands employees amid heightened tensions with anti-government groups.