With his state reeling amid one of the worst COVID-19 outbreaks in the nation, the last thing South Dakota Speaker of the House Steven Haugaard wants to be dealing with during the upcoming legislative session is marijuana. But the state’s voters haven’t left the Republican much choice.

South Dakota voters enshrined legal marijuana in the state’s constitution. So if Haugaard had any thoughts about reversing the initiative once lawmakers reconvene on Jan. 12, they’ve been dashed.

“With a constitutional amendment, there’s really not much we can do about it. It’s written in stone until it’s repealed,” Haugaard said.

South Dakota is one of a handful of states in which voters both approved marijuana ballot questions and elected Republicans to lead state governments. Montana and Arizona, two other states in which Republicans control (or will soon control) the governor’s office and legislature, also backed recreational marijuana at the ballot box. Mississippi passed a measure legalizing medical marijuana.

Many conservative lawmakers oppose the legalization of marijuana, an illegal drug under federal law. But they are discovering obstacles to simply passing bills to reverse the initiatives when state legislatures return to work in January. Some marijuana opponents, realizing the limitations to altering a constitutional amendment, are turning to the courts or local officials to undo the measures or at least blunt the effects of legal pot.

The will of Montana

In conservative states like Montana, where passage of a bill can change or negate a ballot initiative, one thing giving lawmakers pause is that many voters who elected them also approved the legalization of marijuana use for adults 21 and up.

Those kinds of margins are what caused state Rep. Derek Skees to reconsider a bill he was drafting to repeal the Montana ballot measure in anticipation of its passage.

Skees told the Missoulian the day after the election that after it became clear voters supported it — while also supporting Republican candidates for office up and down the ballot — he decided to shelve it.

"There's no way I'm going to try to overturn the will of Montana," Skees told the newspaper.

Haugaard said opposition to the South Dakota measure was derailed by the pandemic and voters never got the message from opponents about the potential negative impacts of legalization.

Proponents of legalization spent nearly $800,000 on their campaign in South Dakota — most of it coming from the New Approach Political Action Committee, a pro-legalization group that works across the country — and five times what opponents of ballot measures raised.

Colorado, the first state to allow recreational use of marijuana in 2014, is often held up as the poster child for what can happen. Proponents say the state has benefited from increased tax income and economic activity. But opponents, including Haugaard, point to studies about increased traffic deaths in Colorado since legalization to explain why they think it’s a bad idea.

“That side of the story wasn’t told and had it been told I think this vote would have gone differently,” Haugaard said.

Marijuana opponents aren’t waiting to see what state lawmakers do, if anything — they’re going to court. The Pennington County, South Dakota, sheriff and the superintendent of the South Dakota Highway Patrol have filed a lawsuit challenging the constitutionality of the marijuana amendment. The Rapid City Journal reported the suit had the backing of Gov. Kristi Noem, and that the state was paying for part of the suit. Noem was a vocal opponent of legalization during the campaign.

Should the legal challenge fail, the amendment is scheduled to take effect July 1 and, according to the governor’s office, it will be up to the state health department to implement it. The legislature will have more control over how the medical marijuana program will work. Haugaard said that will be a big focus of the 37-day session.

Opponents in Montana are also asking the courts to disallow recreational marijuana. Steve Zabawa, a Billings car dealer who has campaigned against legalized marijuana for years, said in his lawsuit that what the voters passed would illegally take power from state lawmakers by designating where tax revenue will go.

Zabawa blamed its passage at the ballot box on pro-marijuana advocacy groups that so outraised and outspent opponents of the measure that he compared it to David and Goliath.

“They candy-coated this deal. They lied to the entire state of Montana by saying that this would benefit veterans and fish and wildlife,” Zabawa said. “They crossed a line and we’re calling them on it.”

Zabawa said that if the courts don’t block recreational marijuana, he’s hopeful that Montana’s Republican-controlled legislature will stymie its implementation.

“I just don’t think there’s a lot of love for marijuana in Montana,” Zabawa said.

In Arizona, a recreational marijuana ballot measure was rejected by voters just four years ago. This year it passed by a wide margin. The state’s voters also chose Joe Biden over President Donald Trump, the first time a Democrat won the presidential election in the state since 1996.

It’s unlikely Arizona’s Republican-led legislature can do anything to stop implementation because of a 1998 law that prohibits lawmakers from changing a voter-approved initiative without a three-quarters majority.

State lawmakers’ hands may be tied, but the initiative did give municipalities some power to restrict its use. The day after the initiative passed, Oro Valley Town Council approved an emergency declaration that would limit which type of businesses could sell marijuana and prohibited its use in public places.

The declaration was based on language written by the League of Arizona Cities and Towns and given to members prior to Election Day.

One of the major backers of the state ballot measures is the Marijuana Policy Project, a Washington, D.C.-based organization that supports sweeping marijuana policy changes across the country. Deputy Director Matthew Schweich said this election showed how the public’s opinion on marijuana is rapidly evolving.

Schweich said he believes the results of the 2020 election bode well for future legalization efforts in states and even at the federal level. Because of that growing support, he dismissed any chance Montana or South Dakota could derail recreational legalization but added that his organization will do whatever it can to fight those efforts.

“This is a bipartisan issue [and] I think we’re at a tipping point. We’ve passed it in big states and small states, liberal states and conservative states,” he said. “We’re feeling pretty good. We believe that 2021 is our year.”

— Kaiser Health News is a nonprofit news service covering health issues. It is an editorially independent program of KFF (Kaiser Family Foundation) that is not affiliated with Kaiser Permanente.

Recent votes in neighboring Montana and South Dakota for marijuana legalization might bode well for similar efforts in North Dakota.

Four Mountain West states have legalized marijuana. Could Wyoming be next?

Wyoming is now one of the few Mountain West states that have not voted to legalize marijuana.

Eastern Montana legislative races seemed to favor incumbents, with a few Democratic seats still poised to flip in the Billings-area as the las…

South Dakota Gov. Kristi Noem spent the weekend traveling out of state to appearances in Texas and Georgia, as she continued to build a national profile among Republicans even as her state deals with one of the nation's worst outbreak of the coronavirus. 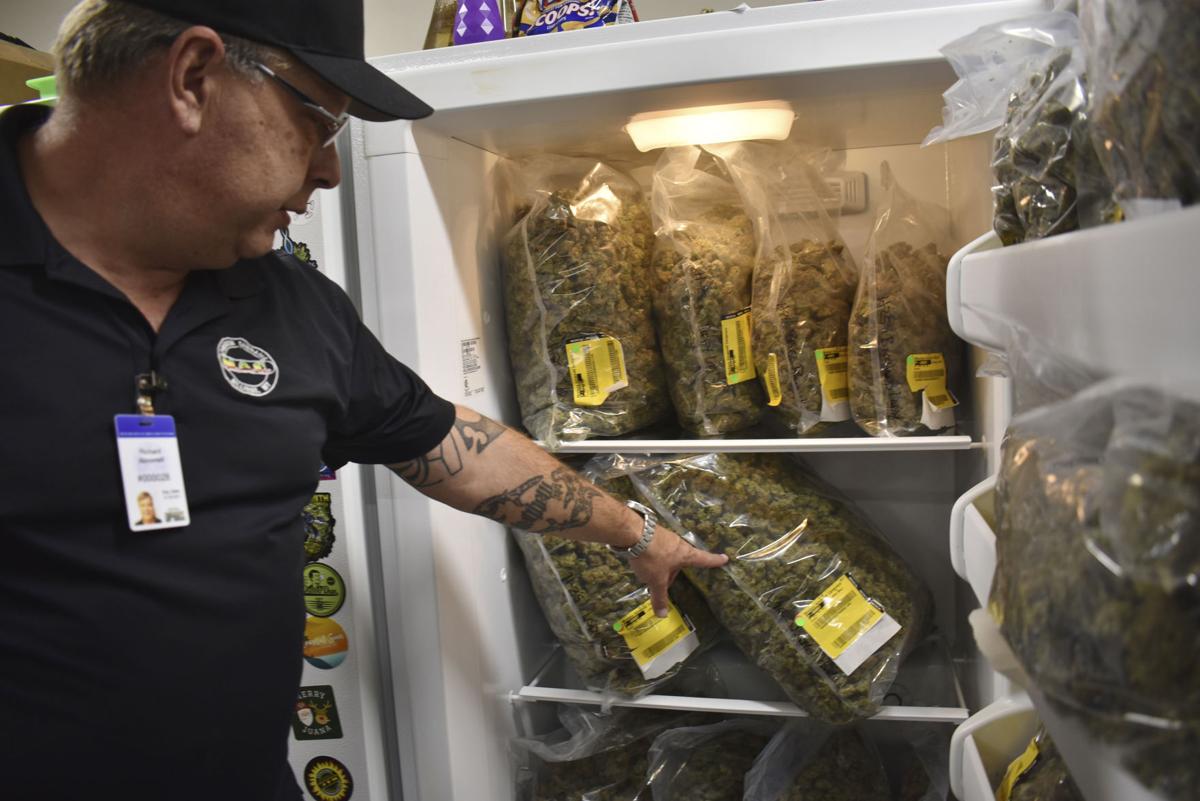 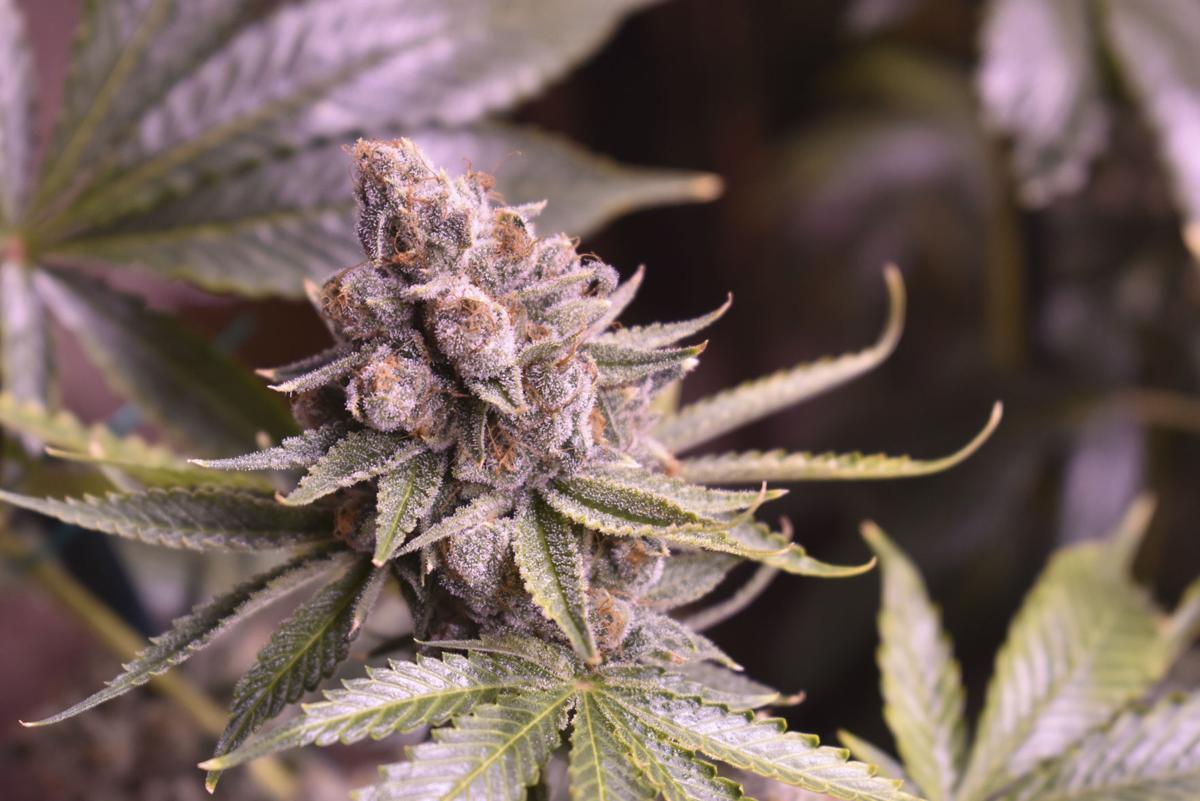 A marijuana plant nearly ready for harvest is seen at Montana Advanced Caregivers, a medical marijuana dispensary in Billings. 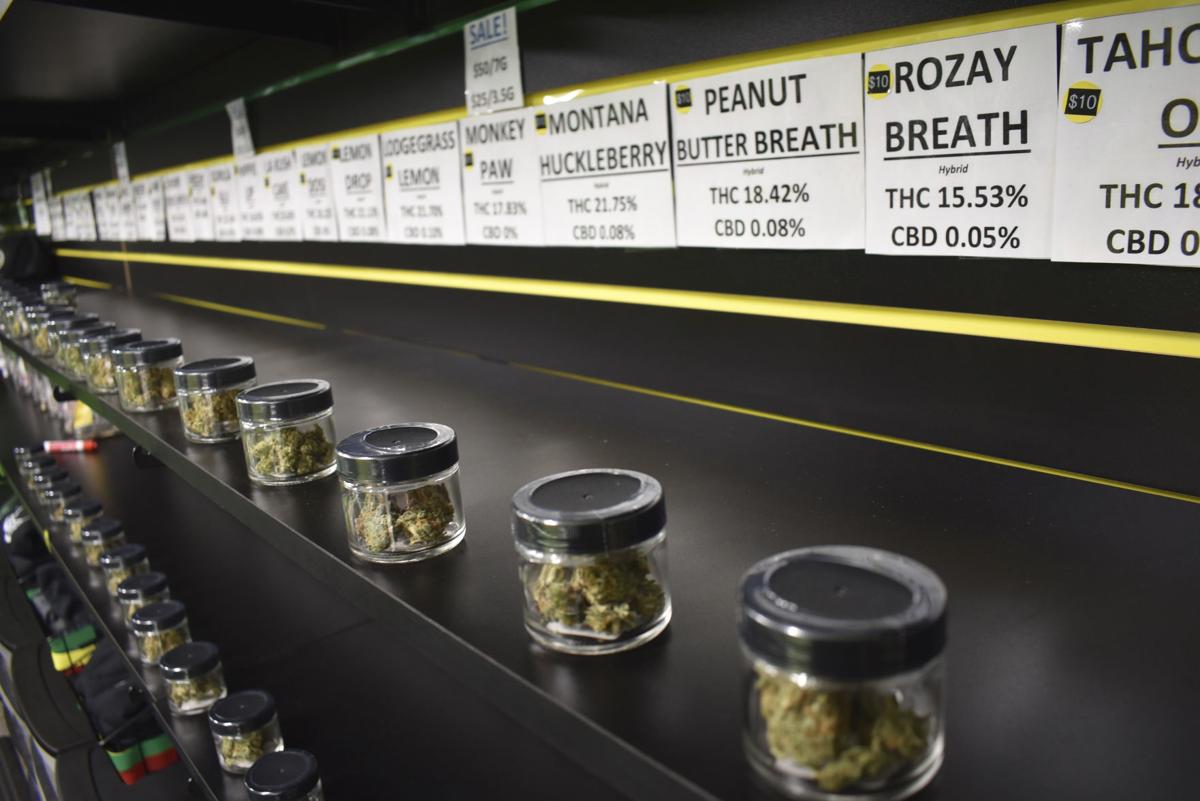 Jars of marijuana are seen on display at Montana Advanced Caregivers. 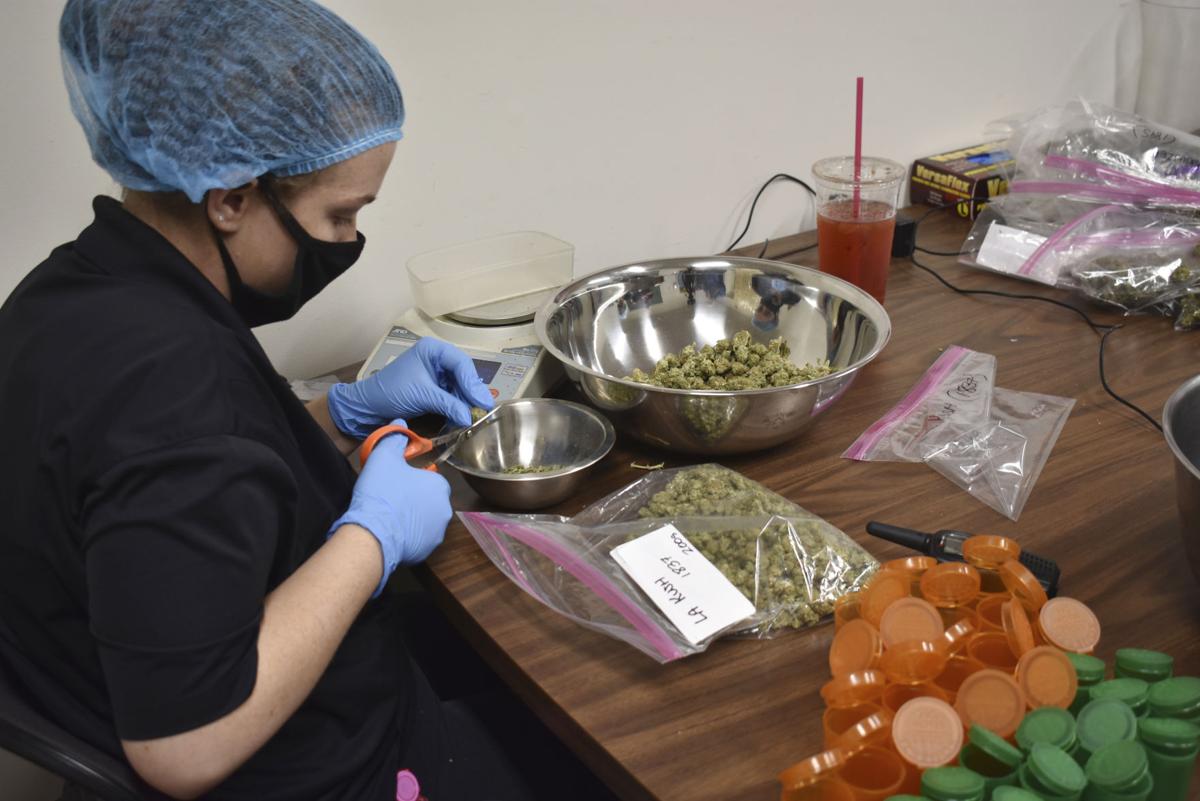 A worker is seen weighing marijuana for packaging at Montana Advanced Caregivers. 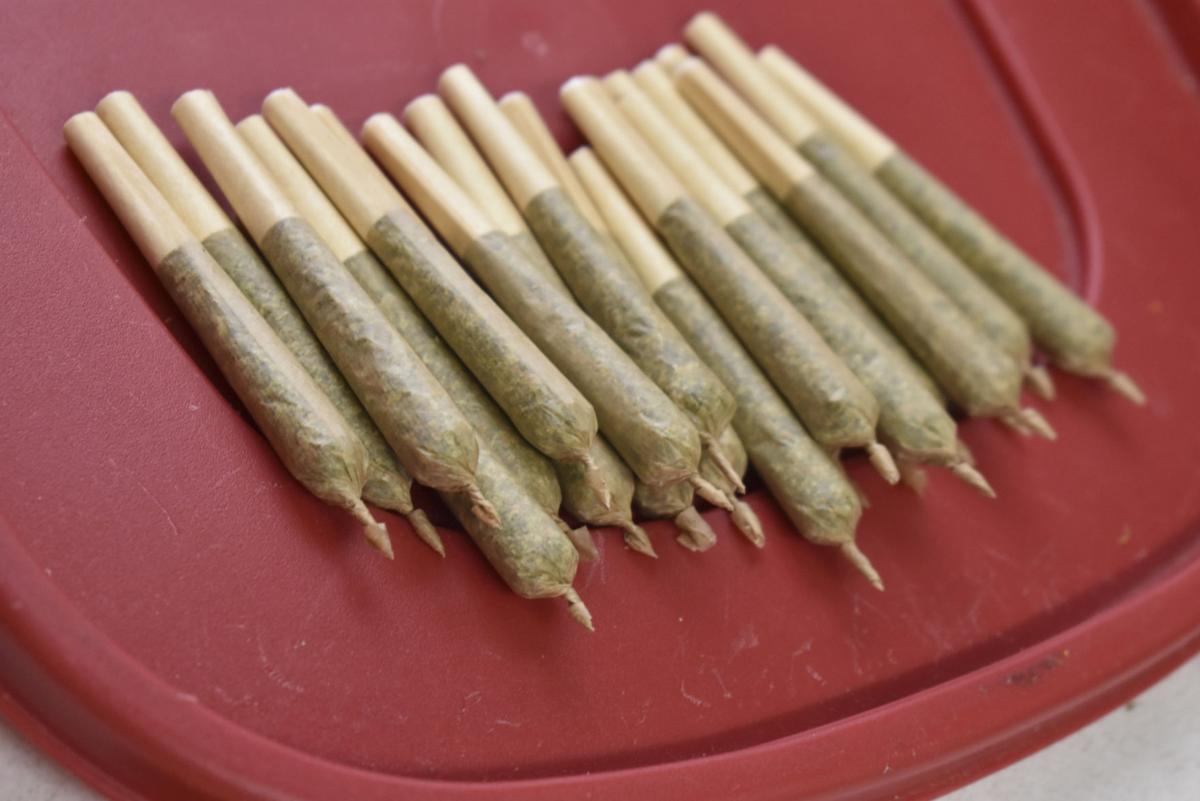