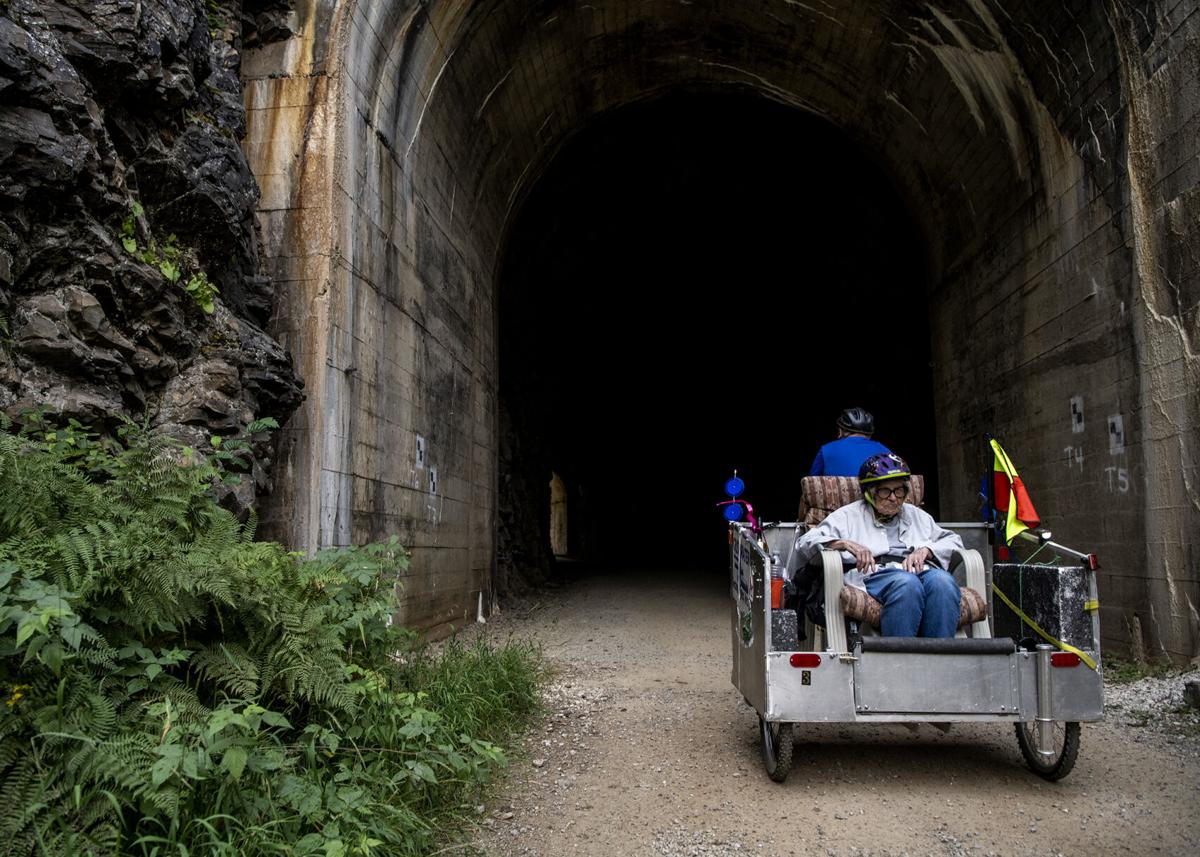 Pearl Cunningham, middle, checked off an item on her bucket list, a ride down the Route of the Hiawatha Scenic Bike Trail from Taft to Pearson, Idaho, on Tuesday. She was accompanied by four generations of the Cunningham family who made the trek from Rock Creek, just east of Missoula, alongside the 91-year-old matriarch. 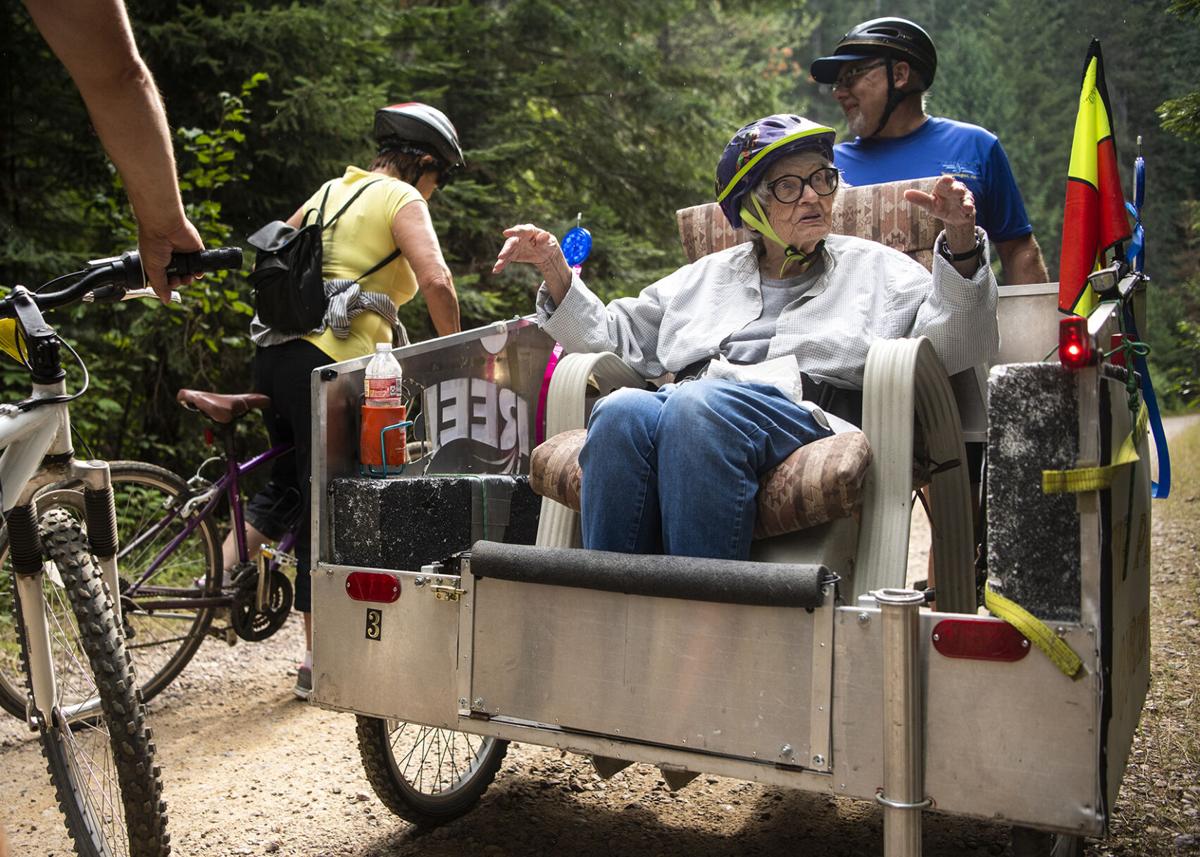 "Now I'll say thank goodness, because it is quite a ride," Cunningham said following a nearly three-hour journey down the 15-mile trail.

PEARSON, Idaho — If she had a few kinks to work out, Pearl Cunningham didn’t let on Tuesday.

Cunningham, 91, climbed spryly to her feet after finishing the trip of a lifetime down the 15-mile Route of the Hiawatha Scenic Bike Trail.

“Now I’ll say thank goodness, because it is quite a ride,” she said.

She made it in the handmade aluminum-framed “Pearl Chariot” towed by mountain bike pedaled by Ken Crisp, her daughter Dana Smith’s longtime partner. They were accompanied by a party that ranged in age from 13 to 91 and included Cunningham’s five children, two grandchildren and great-granddaughter — in all, four generations of the Cunningham family of Rock Creek east of Missoula.

“It worked out beautifully,” said Crisp, who with Smith hit on the idea after years of discussion.

Crisp's said it's long been a bucket-list item for Pearl to see the popular bike trail that passes under the Montana-Idaho state line a few miles southeast of Lookout Pass.

Pearl was OK simply riding a shuttle bus that crosses and for three miles coincides with the well-graveled path following the grade of the former Chicago, Milwaukee and Puget Sound railroad.

“But with COVID and the crowd, 60 people on the bus, Dana said there’s no way,” Crisp said. “We’re going to figure out how to get Mother on the trail.”

At first they looked at a kid’s bike trailer, but it was clear that wouldn’t do. Crisp and Smith decided to create something that would.

They secured for free an aluminum shell from a dog mushing company in Alaska on Craigslist. Home ReSource and Free Cycles Missoula had other parts, and Crisp's own Missoula company, Crisp Water Technologies, provided the bolts and hardware to put it all together.

They sprung the surprise on Pearl over the weekend at a family reunion at her home of 47 years on Rock Creek, which she shares with son Charles and daughter Sam Cunningham. Pearl said they started the reunion tradition following the death in 2014 of her husband, S.E. Cunningham. Due to the pandemic the gathering was smaller than usual but still drew family from around the Northwest. The “chariot” was tested at home. Crisp said the hitch and tongue were rebuilt Monday night, replacing the original pole and bolt with a reinforced Unistrut.

Pearl’s ride, like that of most people who bike the Hiawatha, began in the cool damp darkness of the St. Paul Tunnel, also called Taft Tunnel. Railroad builders more than 110 years ago drilled the 1.66-mile hole through the Bitterroot Mountains to get trains from the St. Joe River drainage in Idaho via Loop Creek to the St. Regis River headwaters in Montana.

“Well, that was amazing,” said Pearl, who rode through the tunnel looking backward at the near and distant headlamps of trailing cyclists. “The whole thing just surprised me, because of its length and looking at those walls, and the rest of the tunnels as well (there are nine in all). To think that someone chipped through all that rock and mountain …”

As the party rolled down the slight grade, they crossed seven sky-high trestles and passed interpretive signs that explained the history of the railroad and the devastating fires of 1910.

Daughters Dana and Sam followed in a four-wheeled side-by-side cycle. Advance arrangements were made with trail officials to remove the middle of three bollards in six locations to get the tandem bike through. Their brother, Rob Cunningham of Spokane, accompanied the main party, as did his daughter McKenzie Thompson, 16, who said she’ll enter Eastern Washington University when classes begin next month.

Pearl’s other sons, John of Salt Lake City and Charles of Rock Creek, ran the course backward. They left trucks at the bottom at the abandoned townsite of Pearson and pedaled up nearly to the Taft Tunnel before accompanying the main group back down.

Pearl Cunningham, who worked in the fledgling physical therapy department at the University of Montana for 13½ years in the 1980s and early '90s, marveled at the lush green landscape so late in August. A few drops of rain even fell as the end drew near.

“The ground covers here are amazing,” she said. “They’re different than what we have in Rock Creek. People up there have lawns. I have a forest.”

General manager Brian Bressel said older people have ridden the Hiawatha Trail, which opened in 1998 and added the St. Paul Tunnel to the mix in 2001.

Just as remarkable are the very young youngsters you'll see on the trail.

“I think that’s what’s changed more than anything is the amount of very young families that are out here now days. Kids of all ages. They’ll have the Burley trailers, then have a bike and let their kid ride the bike a little bit and put it on top the trailer. Interesting things like that.”

The Stillwater County Coroner’s Office has identified the two men killed Wednesday in an accident at the Stillwater Mine near Nye.

Two dead after accident at Stillwater Mine

Two people were killed in an accident while working underground at Stillwater Mine near Nye on Wednesday.

A multi-million dollar deal to sell the Rimrock-Mercedes Benz dealership in Billings has gone sour prompting a lawsuit in U.S. District Court.

Before the western gate to Glacier National Park comes in view, a line of people with clipboards awaits arriving motorists.

A 50-year-old inmate at the Montana Women's Prison died Tuesday, according to the Montana Department of Corrections. Billings police and the Yellowstone County coroner are investigating the death.

The FBI is offering a reward for a woman wanted in connection to opioid and meth circulation on the Fort Peck Indian Reservation.

A Michigan man wanted in Wyoming for venturing too close to the Old Faithful Geyser in Yellowstone National Park last summer has been arrested in Maine for failing to appear for a court hearing.

Pearl Cunningham, middle, checked off an item on her bucket list, a ride down the Route of the Hiawatha Scenic Bike Trail from Taft to Pearson, Idaho, on Tuesday. She was accompanied by four generations of the Cunningham family who made the trek from Rock Creek, just east of Missoula, alongside the 91-year-old matriarch.

"Now I'll say thank goodness, because it is quite a ride," Cunningham said following a nearly three-hour journey down the 15-mile trail.