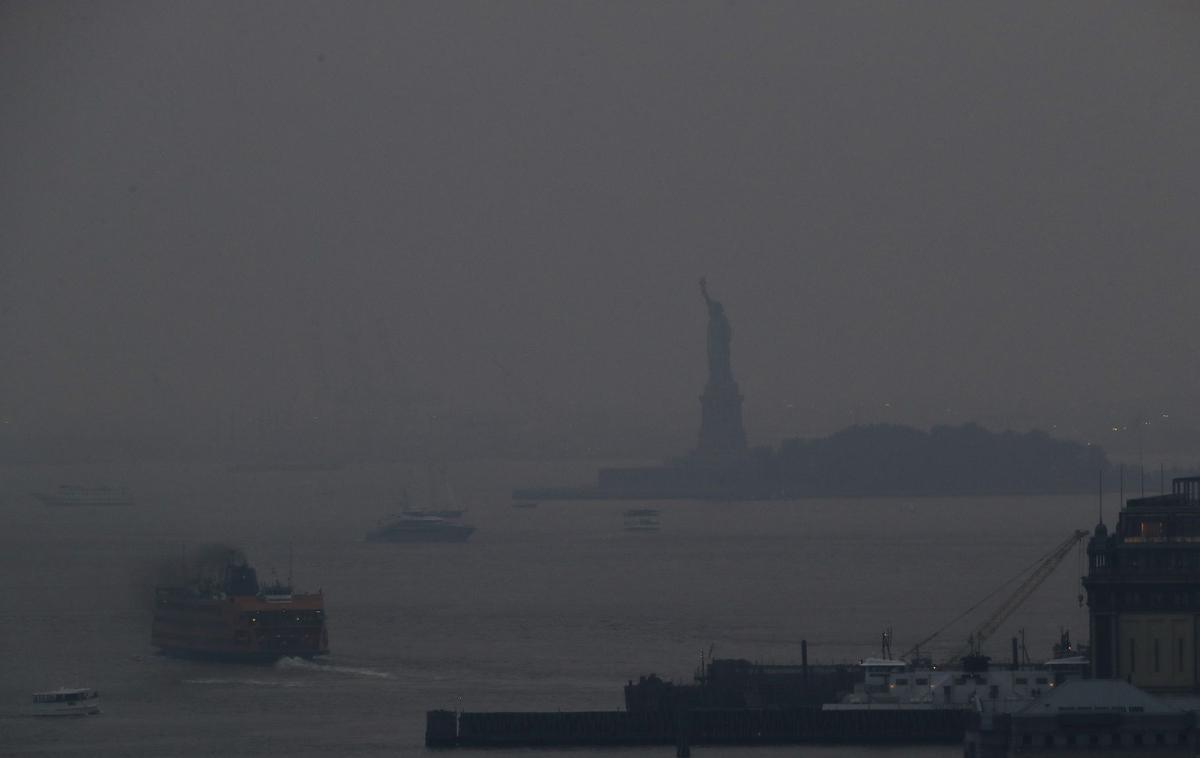 The Staten Island Ferry departs from the Manhattan terminal through a haze of smoke with the Statue of Liberty barely visible in New York City. 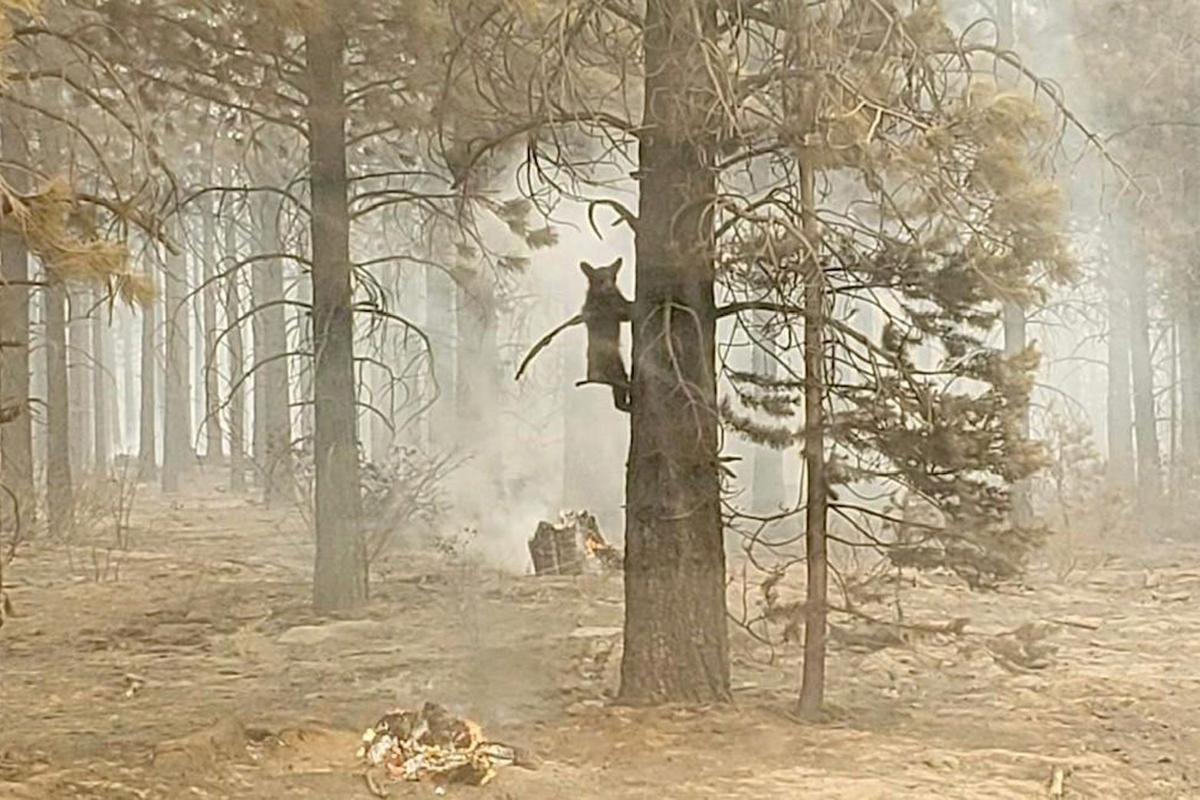 A bear cub clings to a tree Sunday after being spotted at the Bootleg Fire in southern Oregon.

PORTLAND — Smoke and ash from massive wildfires in the American West clouded the sky and led to air quality alerts Wednesday on parts of the East Coast as the effects of the blazes were felt 2,500 miles away.

Strong winds blew smoke east from California, Oregon, Montana and other states all the way to the other side of the continent. Haze hung over New York City, New Jersey and Pennsylvania.

The nation's largest wildfire, Oregon's Bootleg Fire, grew to 616 square miles — just over half the size of Rhode Island. Fires also burned on both sides of California's Sierra Nevada and in Washington state and other areas of the West.

The smoke blowing to the East Coast was reminiscent of last fall, when large blazes burning in Oregon's worst wildfire season in recent memory choked the local sky with pea-soup smoke but also affected air quality several thousand miles away. So far this year, Seattle and Portland have largely been spared the foul air.

People in parts of New Jersey, Pennsylvania and elsewhere with heart disease, asthma and other health issues were told to avoid the outdoors. Air quality alerts for parts of the region were in place through Thursday.

"One of the things about this event that makes it so remarkable is that the smoke is affecting such a large swath of the U.S," said Jesse Berman, an assistant professor at the University of Minnesota School of Public Health and an expert on air quality. "You're not just seeing localized and perhaps upstate New York being affected, but rather you're seeing numerous states all along the East Coast that are being impacted."

David Lawrence, a meteorologist with the National Weather Service, said wildfire smoke usually thins out by the time it reaches the East Coast, but this summer it's "still pretty thick."

Meanwhile, Oregon on Wednesday banned all campfires on state-managed lands and in state campgrounds east of Interstate 5, the major highway that is commonly considered the dividing line between the wet western part of the state and the dry eastern half.

The regulation includes designated fire rings at campsites, as well as candles and tiki torches. Propane grills are still allowed, but the state still urged campers to pack food that doesn't require heating or cooking.

The Oregon fire has ravaged the sparsely populated southern part of the state and has been expanding by up to 4 miles a day, pushed by gusting winds and critically dry weather that's turned trees and undergrowth into a tinderbox.

Fire crews have had to retreat from the flames for 10 consecutive days as fireballs jump from treetop to treetop, trees explode, embers fly ahead of the fire to start new blazes and, in some cases, the inferno's heat creates its own weather of shifting winds and dry lightning. Monstrous clouds of smoke and ash have risen up to 6 miles into the sky and are visible for more than 100 air miles.

Authorities in Oregon said lower winds and temperatures Tuesday allowed crews to improve fire lines, and they hoped to make more progress Wednesday. The fire was approaching an old burn area on its active southeastern flank, raising hopes it would not spread as much.

The blaze, which is being fought by more than 2,200 people, is about one-third contained. It was within a few hundred acres of becoming Oregon's third-largest wildfire in modern history.

At least 2,000 homes have been evacuated at some point during the fire and an additional 5,000 threatened. At least 70 homes and more than 100 outbuildings have burned, but no one is known to have died.

Extremely dry conditions and recent heat waves tied to climate change have made wildfires harder to fight. Climate change has made the West much warmer and drier in the past 30 years and will continue to make weather more extreme and wildfires more frequent and destructive.

While Berman is hopeful that the smoke will last only a couple of days, he said we may see more of it due to climate change.

"We fully expect that you're going to see more situations where smoke, from fires occurring farther away, is going to travel long distances and affect people in other parts of the country," Berman said. "I would not be surprised at all if these events did become more frequent in the future."

A 41-year-old man killed Tuesday in a crash outside of Miles City has been identified.

Montana adds 664 COVID cases in last week, hospitalizations at highest average since May

Montana has averaged 71.6 COVID-19 patients in hospitals over the last week, the highest seven-day average since May. The state sits at 48.9% fully vaccinated.

An emergency airplane landing south of Hamilton led to the arrest of two Helena residents on felony theft and drug charges.

Wildlife officials had to tranquilize the bear and move it by boat elsewhere in the park in the hope that tasting human food won't make the animal a recurring danger to people.

Sheridan County officials are asking the public for assistance in finding a man from Plentywood who went missing over the weekend.

The Staten Island Ferry departs from the Manhattan terminal through a haze of smoke with the Statue of Liberty barely visible in New York City.

A bear cub clings to a tree Sunday after being spotted at the Bootleg Fire in southern Oregon.