Thirty-seven landowners will be awarded 47 free elk hunting tags only good on their property during this fall’s hunting season under a newly devised process, the Fish and Wildlife Commission agreed at its Wednesday meeting.

In return, the landowners can pick one person to hunt while the Montana Department of Fish, Wildlife & Parks will pick two others for a total of 141 public hunters.

Created in 2001 and known as 454 agreements, after the bill number creating the legislation, the Elk Hunting Access Agreements were altered by the last Legislature, increasing landowner interest. In the past, landowners had to allow four hunters for every free tag they received. The Legislature dropped that to three with the landowner allowed to pick one. The landowner tags are also transferable to family or full-time employees.

Landowners can provide additional hunters access to their land, and some have, but are required by statute to at least meet the minimum requirements.

Jason Kool, landowner-sportsman coordinator for FWP, said so far about 27 of the landowners have indicated they will provide access beyond just three hunters. It was also noted that some landowners will provide public access through the Block Management Program, a separate FWP access program that pays landowners to provide public access to their private land. Nothing prohibits a landowner from participating in both, and no landowner had yet shifted to the 454 program and dropped their Block Management enrollment, Kool added.

“I see this as showing the awesome potential of what happens when you incentivize landowners instead of trying to intimidate them,” said Commissioner Brian Cebull of Billings. “I think it’s a great success.”

He went on to encourage the department to monitor the program to ensure landowners are participating “in good spirit” by reaching out to public hunters and allowing them adequate time to hunt. He said he would also like to see some standards for landowners, including allowing a public bull elk hunter for every free bull elk tag awarded by FWP.

The Private Land/Public Wildlife Council is looking at such changes, which will have to be made legislatively, FWP Director Hank Worsech noted.

“This is going to be impactful for access in the future,” Cebull added.

Conservation group representatives, who had decried the haphazard process used last year to award 28 landowners tags – some after the hunting season had already started – joined in praise for the new process with a few reservations.

“This was kind of a little bit of a mess when this program first came to you, and you’ve done a really great job in getting it punched up and in a working fashion,” said Marcus Strange, of the Montana Wildlife Federation.

He added there are other programs meant to build relationships with landowners.

Thomas Baumeister, volunteer vice-chair of the Montana Chapter of Backcountry Hunters and Anglers, praised the department for listening and reconfiguring the program with an application deadline, a way to manage demand, as well as accountability, transparency, communication and public involvement.

“The director deserves much credit for championing this process,” Baumeister said.

Next year the application deadline will be moved even earlier in an attempt to align with hunting license drawings.

Most landowners and hunters who participated praised the program, although some glitches were noted like landowners not answering calls or hunters not responding to landowners.

Out of the 96 hunters surveyed by FWP, 48 shot elk, including 16 bulls. Some hunters reported shooting a second elk through the program. Twenty-two of the 28 landowner tags were filled, with 20 bulls shot.

The Private Land/Public Wildlife Council has been wrestling with the details of a program that provides free elk tags to landowners in return for public access. The group's divisions are reflective of the state.

Citing a short timeline for notifying participants, the Montana Fish and Wildlife Commission on Tuesday approved a deadline change and a new p…

New guidelines and timelines for Montana landowners to apply for a free either-sex elk hunting tag will go before the Fish and Wildlife Commission for approval on April 19.

Increasing the harvest of elk on private land is the goal of the Elk Hunter Access Agreements, also known as 454 agreements. 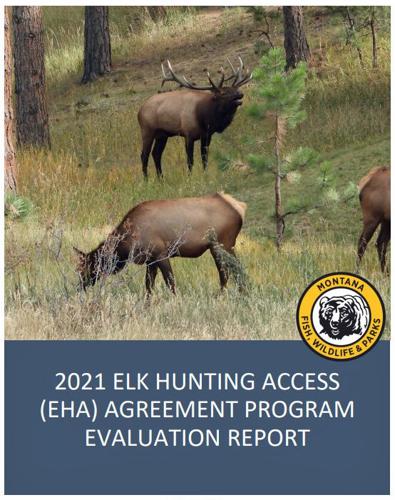