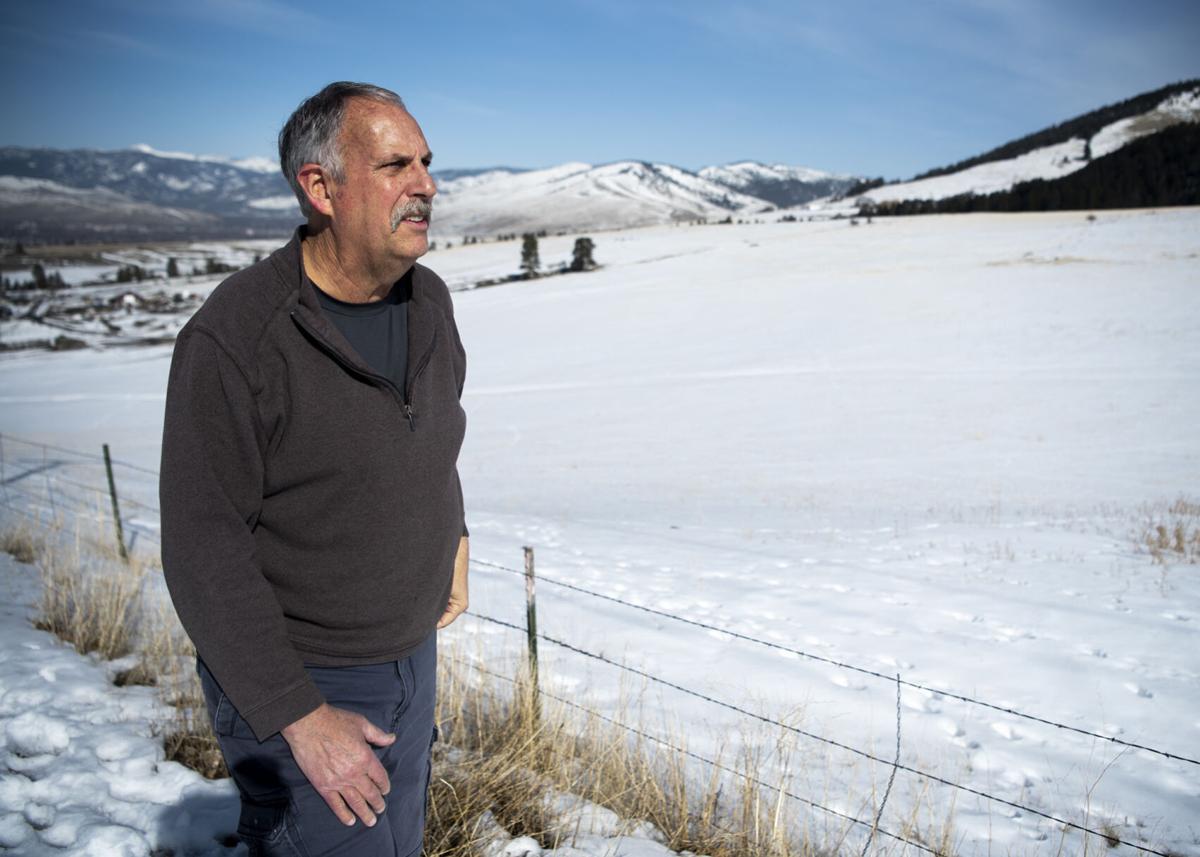 Scott Peryam, a resident of the South Hills neighborhood, spotted a possible pair of wolves during his walk at the top of Hillview Way on Monday. Montana Fish, Wildlife & Parks carnivore specialist Tyler Parks said the photographs of the large canines aren't conclusive, though there is a pack of wolves in the area. 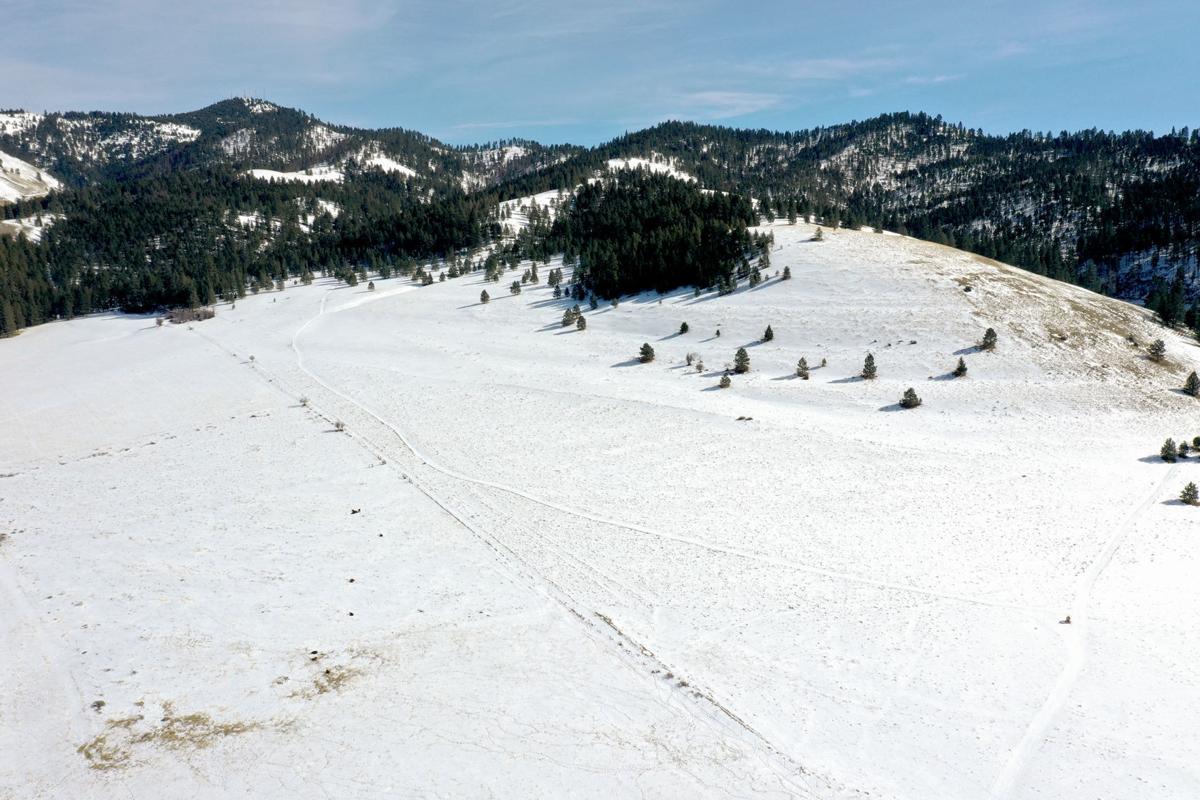 An aerial view shows the spot where Scott Peryam saw large animals running in the distance on Monday.

From songbirds at the window feeder to elk on Mount Jumbo, Missoulians are used to seeing wildlife munching meals around town.

Scott Peryam was walking around the top of Hillview Way on Monday when he spotted something much different — a possible pair of wolves.

“Then I saw the two, ah, principals,” he said of the canine pair trotting across a ranch field above the South Hills water tower. “I do a lot of hunting. I’ve seen tons of coyotes. The first thing I thought was: these were big.”

Domestic dogs, coyotes or wolves, the two gray canines were about 300 yards away when Peryam got out his binoculars to take a better look. He also got photos with his cellphone camera, although the “principals” are too far away for a zoom to provide any more conclusive detail.

“We know there’s a pack working Miller Creek (south of the South Hills toward Lolo) and a pack that uses the Rattlesnake,” Parks said. “There was a wolf above the Missoula dump right on the treeline that we verified. There are wolves up Blue Mountain. They’re closer than you realize, but you don’t hear about it until a lion kills a deer in your yard or a wolf track shows up in your driveway.”

However, in a pet-centric community like Missoula, Parks has also had to filter out a lot of misidentifications. A recent report of one black and two white wolves harassing bighorn sheep near Bonner turned out to be three domestic (and very wolf-like) dogs.

Parks said behavior can also be a good clue. A few years ago, he investigated reports of a wolf chasing elk on Mount Jumbo. While photos of the incident were pretty convincing about the size of the canine, Parks said the fact it was chasing the elk uphill was a counter-indication.

“You rarely see a wolf chase uphill,” Parks said. “That’s a losing game, and that’s not how wolves work. They hunt from above.”

The animals Peryam saw weren’t hunting anything visible. This is the time of year some wolves disperse from their packs in search of new mates or territory.

“I was enthralled watching them through the binoculars,” Peryam said. “I drive up there every day to see if I can get lucky again.”

Amazon appears to have votes to block union effort

Amazon appears to have votes to block union effort

Stacey Abrams on voting rights, her next move

Stacey Abrams on voting rights, her next move

The Republican governor, who took office in January, had mild symptoms Sunday and was tested Monday and received the positive result later in the day.

State wildlife commissioners have banned motorized watercraft from a lake near Glacier National Park in northwestern Montana at the request of residents worried about growing pressures from people moving into the area.

Bryan Dalpes and Rachel Luger were awarded $3,950 in punitive damages and $1,414.50 in damages and special fees by the Missoula County District Court for the death of their 17-month-old lab mix, Betsy.

Reuben Charles Blackwolf, 44, was originally charged in U.S. District Court on Oct. 23 with second-degree murder in the death of Corey Blackwolf.

House Republicans on Tuesday endorsed all three GOP-sponsored marijuana implementation bills, meeting the party leadership's expectations to propel each proposal to the Senate.

Montana added 158 new cases of COVID-19 on Saturday, and the deaths of 11 more of its residents due to the virus have been confirmed.

The 11 deaths occurred between January and March

The president of an oil processing company whose Eastern Montana plant exploded in 2012, injuring workers, is sitting in the Yellowstone County jail after failing to report to prison to serve his sentence.

Montana reported 232 new cases of COVID-19 on Thursday, and the deaths of five more residents due to the virus have been confirmed.

Scott Peryam, a resident of the South Hills neighborhood, spotted a possible pair of wolves during his walk at the top of Hillview Way on Monday. Montana Fish, Wildlife & Parks carnivore specialist Tyler Parks said the photographs of the large canines aren't conclusive, though there is a pack of wolves in the area.

An aerial view shows the spot where Scott Peryam saw large animals running in the distance on Monday.