MetraPark to serve as site for coronavirus patients needing shelter

After arrest, inmates cross state to complete sentences
Share this
× 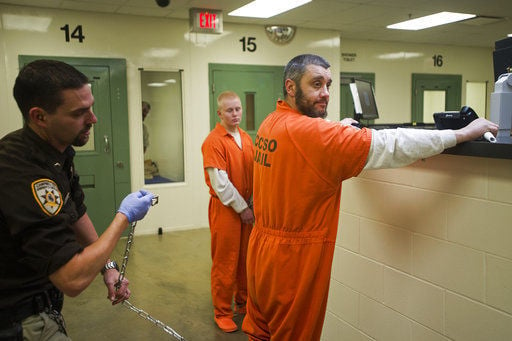 In this undated photo, Campbell County Sheriff's officer Benjamin Goold unshackles Bruce Tiedemann as Tate Pikula waits beside him at the Detention Center after both inmates returned from court appearances in Gillette. The pair are among more than 2,000 inmates that populate Wyoming's prison system. 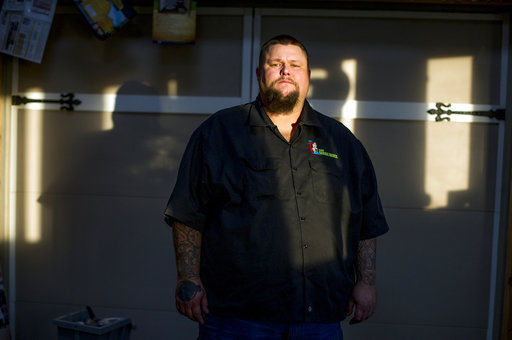 Brian Hoffman, who was released from prison nine months ago poses for a photo at Curry Garage Door in Gillette, Wyo. Hoffman struggled with addiction, spending time in and out of jail and prison.

GILLETTE, Wyo. — For years, Brian Hoffman struggled with addiction, spending time in and out of jail and prison.

At 19, he began a five-year stint at the Wyoming State Penitentiary in Rawlins for drug charges. When he was released, Hoffman attended the Sturgis Motorcycle Rally, where he was caught with cocaine and sent to the South Dakota State Penitentiary for a year.

Then he returned to Wyoming, found a job in Gillette and tried to stay out of trouble.

He eventually fell into old habits, and in 2007 was placed in Treatment Court for delivery and possession of methamphetamine. After completing the intense yearlong program, he started serving probation for those drug charges.

"I did well for quite a while, and then I started doing drugs again," he said. "It didn't take long after that."

While on probation, he robbed a house and helped steal tattoo equipment, a laptop computer, a digital camera and jewelry from Felony Ink. The court revoked his probation, reinstated a sentence of three to eight years for the drug charges and added a consecutive five to 10 years for the burglaries.

With that, Hoffman was again part of a vast network of governmental and non-governmental agencies across the state that supervise inmates from sentencing to release.

The Wyoming Department of Corrections now is home to 2,227 inmates — or one in every 247 state residents.

This figure represents only a fraction of those in the criminal justice system, which includes probationers, parolees, jail inmates and people released on bond.

In Campbell County, only about 10 percent of the 3,000 annual arrests end up in prison.

Across the state, county arrests and inmates sent to prison closely track population. The higher the county's population, the more arrests and the more inmates go to prison.

Overall, the state prison population is increasing, with about 500 inmates in 1980 to more than 2,000 today. Going forward, the state expects the inmate population to continue to increase.

Over the last decade, the Department of Corrections has expanded its facilities to address overcrowding. Despite the expansion, state prisons are operating at 95 to 103 percent normal capacity. However, the prisons aren't overflowing, because spots are reserved for specific uses, like substance abuse or medical treatment, so they might sit empty if no inmate qualifies to fill them.

As the prison population continues to grow, it's possible the Department of Corrections will have to send prisoners out of state, which is more expensive than housing them in Wyoming.

The Wyoming ACLU recently released a report in advance of the upcoming legislative session explaining that the growing incarcerated population stems from the Legislature's continually adding new crimes to the books and setting longer sentences for existing crimes.

While crime has increased, funding for probation and parole — which aim to reduce recidivism — has been drastically cut. The ACLU predicts that this could cause higher incarceration rates.

To reduce the number of people in the criminal justice system, the ACLU suggests the upcoming legislative session include probation and parole reforms, creating a women's boot camp, re-evaluating mandatory minimum sentences and putting a halt on creating new crimes unless absolutely necessary.

Looking past the legislative session, the ACLU proposes reviewing and revising property crime laws and pretrial policies that hold an increased number of people in jail before trial, which can be costly for counties.

Criminal justice reforms are particularly important because the Department of Corrections' budget has increased only 2 percent in the last nine years, while its daily inmate population has increased 53 percent, according to a report from the Legislature.

The state has implemented numerous cost-saving measures like renegotiating inmate medical services and freezing 122 full-time security positions. Ultimately, the most effective way for the Department of Corrections to save money is to invest in non-prison alternatives, such as probation revisions and the reinstatement of substance abuse treatment funding.

The 2,227 Department of Corrections inmates go through a long process of paperwork, waiting and travel.

After his sentencing, Hoffman returned to the Campbell County jail, where he waited for transport to the Medium Correctional Institution in Torrington. Women are sent to a facility in Lusk.

It can take 30 days from sentencing to arrival in Torrington or Lusk because District Court, county jails and the Department of Corrections have to receive and complete paperwork.

Anything from weather to overcrowding can delay transport, and the Department of Corrections often waits until there are several inmates ready for transfer and stops at nearby counties on the way to prisons.

In Torrington and Lusk, the Department of Corrections classifies inmates, determining their needs and security level. During a 45- to 60-day classification period — called "the fish tank" — inmates spend 22 hours a day in their cells.

In addition to the Torrington, Rawlins and Riverton facilities, the Department of Corrections offers men the Honor Conservation Camp and Boot Camp in Newcastle.

On the Conservation Camp side, 238 low-security inmates hold jobs and occasionally work for the state Forestry Division on public lands' projects. Boot Camp is a 120-day, physically demanding program for first-time male offenders younger than 25 and gives an opportunity for a sentence retraction.

For women, who make up 11 percent of Wyoming's inmates, the Women's Center in Lusk is the only option.

The ACLU filed a class action suit in federal court this summer on behalf of Taylor Blanchard, a 23-year-old first-time offender, who was recommended for Boot Camp but was disqualified from the program because of her gender.

Blanchard is asking the federal court to expand the options for women prisoners by sending all qualified women to Boot Camp and by making the program gender neutral.

There are no federal prisons in Wyoming, so those who commit federal crimes, like drug trafficking, are sent out of state.

An average inmate serves 82 percent of his or her minimum sentence before receiving parole. However, the time inmates serve can vary dramatically depending on how well they follow rules and program requirements.

For instance, Hoffman served about two-thirds of the minimum sentence for each of his crimes and was released in five years.

Sometimes, the Department of Corrections sends parolees or inmates to Adult Community Corrections in Casper, Cheyenne or Gillette. These facilities contract with the department to provide a bridge between prison and full release.

"It can be nerve-wracking, especially if you've been in prison for a long time, because a lot of things change," said Richard Burton, who directs the Volunteers of America, the Adult Community Corrections in Gillette. "Cellphones weren't even heard of back when some people went to prison. They go into prison and come back out to something completely different."

At the VOA, 106 state inmates work through a 6.5-month program in which they earn free time in the community for completing requirements like finding a job, maintaining a budget and contributing to the cost of their stay.

"It's nice to have that step down, a gradual transition where they still have structure living, but get to be out in the community and test the waters," Burton said.

The VOA has the space to accept every inmate the Community Corrections Board approves, and ultimately, 78 percent successfully complete the program. Those who violate the rules go before the Parole Board or a judge for re-sentencing.

Those who don't get sent to a program like the VOA are often on their own or supervised by a parole officer.

Outside prison, he worried the Parole Board, which administers sanctions for parole violations, wouldn't trust him or that he would end up in prison again. He asked friends and family to hold him accountable and gave them his parole officer's phone number.

"I put safety nets around myself to protect myself from myself," he said.

Hoffman moved in with childhood friends, who loaned him a car. He worked as a chef and then as an office manager, eventually earning enough money to buy his own vehicle.

Until his parole ends in 2020, an officer will ensure he follows his release conditions, which include regular meetings, employment and random drug tests.

"I think parole works and is better than doing the full time and then being set free to do whatever you choose with zero consequences, unless you catch a new charge," he said.

Rather than expecting to return to prison, Hoffman is making plans to move into his own place.

While workers with associate's or bachelor's degrees do earn more on average, there are some relatively high-paying careers out there for peop…

In this undated photo, Campbell County Sheriff's officer Benjamin Goold unshackles Bruce Tiedemann as Tate Pikula waits beside him at the Detention Center after both inmates returned from court appearances in Gillette. The pair are among more than 2,000 inmates that populate Wyoming's prison system.

Brian Hoffman, who was released from prison nine months ago poses for a photo at Curry Garage Door in Gillette, Wyo. Hoffman struggled with addiction, spending time in and out of jail and prison.